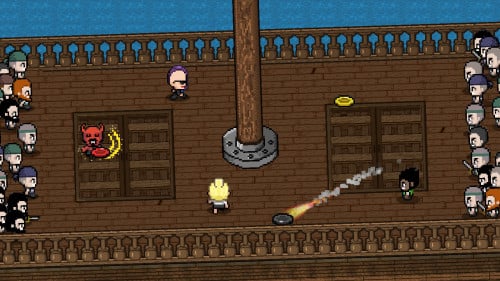 DiscStorm is an arena combat game where you use flying discs to defeat a swarm of enemies and bosses. The game is pretty much dodgeball mixed with frisbee sports. All levels contain a couple waves of normal enemies, two encounters with a mini-boss, and finally a battle with the actual boss of the level. The normal enemies can be mindless zombies (who are really only dangerous if they swarm you), Frankenstein-like monsters who have a disc of their own to throw at you (so you need to dodge them), masked monsters who can move very fast in an attempt to hit you (and make you lose some health), as well as other various enemies along the way. The mini-bosses are all unique and require you to do something special to defeat them. For example, there is one mini-boss where you have to knock them into their own explosives as they are going off. Each level then ends with a pretty tough boss fight (the early ones are pretty easy but once you get a few levels in they quickly increase in difficulty).

In addition to the single-player adventure, DiscStorm also offers a pretty fun multiplayer deathmatch mode where you play several different mini-games against your opponent. These mini-games include a first-to-10 score race (score 10 hits on your opponent), one where only the current king or queen scores points (you need to hit them with a disc to dethrone them and become the new one), and a “deathdisc” mode where there is only one disc and being hit by it knocks you out of the round.

What I Liked About DiscStorm: 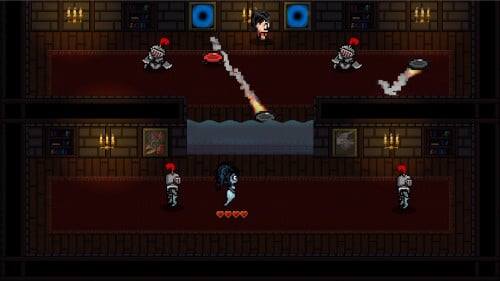 Just as it is for every video game, the most important thing is whether or not the game is fun to play. DiscStorm passes that test with flying colors, it is a very fun game to play. The levels are themed very well (everything from a mine, museum, and pirate ship is represented) and each of them have some new game mechanics to offer. While the minions don’t really change that much, each of the mini-bosses and bosses is different, very unique, and challenges you in a different way.

Speaking of the difficulty, I would say that DiscStorm is fair but overall pretty challenging (especially later in the game). The first couple of levels do a nice job of introducing the mechanics and helping you learn how to play the game. These first few levels are very easy and can easily be completed (and 100% aced in just a few tries). The middle levels start to get more and more difficult and will be much harder to ace (I died 14 times and took over 42 minutes to complete the mining level). The last couple of levels are very, very difficult and will be next to impossible to 100%. While I’m not the best gamer out there and you will probably do better than I did, the last level took me 65 deaths and 83 minutes to complete. I know that is an embarrassing time but the level is very hard. However, while the last level is maybe a little too hard in my book, the rest of the game is difficult but fair, which is exactly what you want in a video game.

One great decision DiscStorm made was the inclusion of checkpoints (if you die you just go back to the start of the wave you were on with full health instead of having to restart the level). The levels in the game are pretty long so failure would have been very painful and could have made DiscStorm more frustrating than fun. If you care about acing all of the levels and getting all of the achievements, this won’t help you though (since you have to complete the level without dying). If you are a perfectionist (or achievement hunter), this could make completing the game 100% very frustrating but for all other gamers, there is pretty much no pain to dying.

I also loved pretty much everything about the presentation in DiscStorm. I love pixel art (if you don’t you might disagree with me on this) and think that the art in this game is some of the best pixel art I’ve seen in awhile. The characters look good and the level themes are amazing. The music was also a bright spot for the game, each level has different themed chiptunes (the pirate level has sea shanty/pirate-like music, etc.) and a lot of the songs are pretty catchy. If you are a fan of chiptunes, I think you will dig the music in DiscStorm.

While I love to laugh, I rarely find video games funny. I can’t blame them for trying but they just usually aren’t as funny as they think they are. However, DiscStorm’s dialogue actually made me laugh out loud a few times. While the concept of mocking video games and pop culture is done a lot, I chuckled at things like “Enough dialogue! What is this, an RPG?” and the joke the game made about training montages. DiscStorm is an example of a game that is actually pretty funny instead of being corny and cheesy.

Finally, the multiplayer mode is actually pretty good. The different modes are fun to play and the computer is actually challenging (maybe too challenging) to compete against. Occasionally the computer will stand around doing nothing but most of the time they are moving around like somebody who just had way too much sugar. They also chuck their discs like crazy (making them very hard to hit and pretty hard to avoid being hit by even though their accuracy isn’t the best). Usually playing against the AI in multiplayer modes like this is simple and boring (because it is very hard to program good AI), in DiscStorm it actually puts up a challenge (and it managed to beat me quite a few times). While I didn’t have a chance to play the local multiplayer, I’m sure it would be a ton of fun to play especially if you can get four players to play with. The multiplayer was fun enough against the computer, I see no reason why the local multiplayer wouldn’t make it even better.

Not a whole lot actually. I think DiscStorm is a pretty fun and well-polished game outside of a few small problems. One thing the game could do slightly better is let you know what you are supposed to be doing in some of the mini-boss and boss stages. While I could usually figure it out pretty quickly, there were a few levels where it took me awhile to know what I was supposed to do. The mine level in particular was hard to figure out. First, I had no idea what I was supposed to do against the mini-boss and then in the boss stage, for a few minutes I had no idea that pushing left button (which usually deflects/dodges) moved you to a different track (meaning I took unnecessary damage from driving off-track). Most of the levels are easy enough to figure out but you might have one or two times where you have no idea what to do.

The only other problem was a few minor bugs (or at least what I think are bugs) that I ran into. In the mine level, I twice spawned on broken tracks taking immediate damage which I couldn’t do anything about. Also, I’m not entirely sure this is a bug (I’m assuming it is but this could be intentional) but I hate it when enemies land on you (when they are entering the arena) and you take damage just because they happened to fall right on top of you. It is sometimes hard to avoid enemies entering the arena (especially since you will likely be busy with other enemies) and this happened to me way too many times (probably on at least five or six occasions). In one of the difficult levels (which I was struggling to complete), this quirk almost even killed me just before I finally completed it (which really would have made me angry and frustrated). Thankfully, I finished off the level and that lost damage didn’t wind up hurting me.

DiscStorm costs $11.99, which is very reasonable (it actually kind of felt more like a $14.99 game to me). It isn’t an amazing deal from a bang for your buck standpoint, but it also isn’t that bad either. The game took me a little more than six hours to beat (I didn’t spend time trying to complete all of the achievements or ace all of the levels but I might go back later and do so since I enjoyed playing it) but you probably could do better than me (like I wrote earlier, the last level took me over an hour to beat which seems like at least double what it should have taken me). If it takes you the same amount of time to beat DiscStorm as it did me, that would be about $2 per hour. Not great, but also not too shabby for an indie game. If you want to complete all of the achievements and ace all of the levels, add several more hours to that playtime (probably at least three or four for a total of about ten hours). Also, if you have friends you can play with (locally) the multiplayer could easily add several more hours to your total.

When I was looking at Steam’s new and upcoming releases, DiscStorm looked pretty good to me but I didn’t expect to like it as much as I did. While there are a few bugs (which I’m sure are either already fixed or will be soon) and a couple small issues here or there, the game is very fun to play and a pretty decent bargain for an indie game. If you aren’t into retro games (with pixel art and chiptunes), you probably won’t enjoy DiscStorm as much as me but for gamers who grew up with games like this, I think you will love it. Recommended.