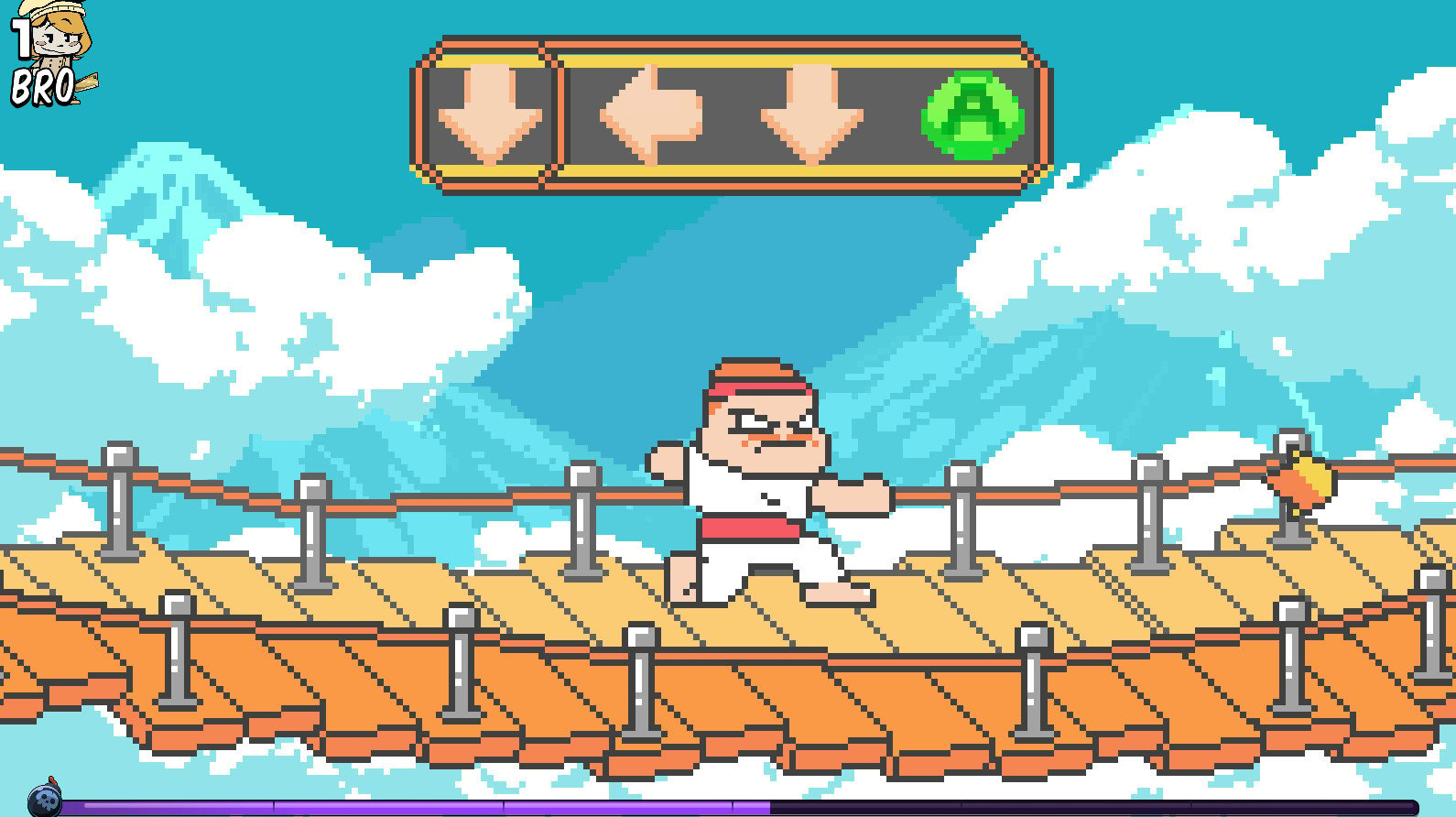 Around three years ago I took a look at Diner Bros. I really enjoyed the game as it was a fun twist on the typical running a restaurant game. Well the sequel to Diner Bros, Diner Bros Inc, released today and I was excited to check it out. So how does the game compare to the original? Outside of sharing the name and taking place in the same universe, Diner Bros Inc actually shares very little in common with the original game. Instead of running a restaurant, Diner Bros Inc is basically a WarioWare style game where you get to play a bunch of minigames back to back. Diner Bros Inc is a pretty big departure for the franchise, but it is a fun compilation of minigames even if I wish there were more of them.

Anyone who has played a WarioWare game or another similar game before will basically know what to expect from Diner Bros Inc. The game is divided into three worlds/sections with each featuring its own unique set of minigames. Most of these games only last a few seconds and require the use of a couple buttons at most. The minigames range from collecting a certain number of items, to avoiding obstacles, to simple memory games, and even some minigames based on mechanics from other famous video games from the past. Either one player or a group of players will choose a group of minigames and the game begins.

Based on the group of games that you choose, the game will begin randomly selecting minigames for you to play. Before the game loads you will be given the name and a brief description of its controls. You will then need to try and complete the minigame within the time limit without making a mistake. If you should fail to complete it in time or fail the game in some other way, you will lose one of your three lives. The objective of the game is to make it through as many minigames as you can before you run out of lives. As you complete more minigames you get less time to complete them and they become harder. Every so often you will also have to face a boss fight which is basically a more difficult variant of the normal minigames. If you make it through enough minigames you will unlock the next scenario and you will also acquire currency which you can use to purchase additional minigames for each group of games.

With Diner Bros Inc basically being a compilation of a bunch of minigames played back to back, the success of the game was going to rely pretty heavily on the minigames. The good news is that the minigames in Diner Bros Inc are actually quite enjoyable. There are some that I enjoyed more than others, but outside of maybe a handful I enjoyed all of them. Some of the minigames are really simple like pushing a button/rotating a joystick as quickly as you can, while others actually feel like mechanics taken from other video game genres. I was honestly surprised by the amount of variety in the minigames. Some of the minigames have similar mechanics, and others play completely different.

I think the minigames succeed for a couple of reasons. First they are all simple to play. The fact that the instructions for each minigame is a couple words to a sentence long should make that pretty clear. As soon as you see the game for the first time you should basically know what you are supposed to do. Second the minigames are silly. Each group of levels are somewhat themed around a topic, but most of the time you will play one minigame and then the next will be something totally different. I think this silliness keeps the game lighthearted and fun. Finally the game’s speed keeps things constantly moving. Each minigame only takes a few seconds, but you will play minigame after minigame. On their own the minigames would maybe be kind of boring, but quickly flying between them is fun and keeps up the excitement.

As for the difficulty I think there is a good ramp up. At their most basic level, each of the minigames are pretty easy. As long as you are paying attention and try to complete them at a decent speed, you shouldn’t have any trouble completing each minigame early in a run. Even the minigames you struggle with will get easier the more you play them. Every few minigames that you complete though the amount of time to complete them drops and the amount you have to complete increases. This starts to make even the simplest minigame considerably more difficult. I think the ramp up in difficulty is good as it gets consistently more difficult until it gets to the point where you basically can’t keep up. Maybe experts at these type of games could go forever, but most players will eventually hit a point where the amount of time or the amount you have to get done will be too great where you can’t finish them in time. Basically I think most players will eventually hit a plateau in the number of minigames that they will be able to complete in a run. I think the game’s difficulty does a good job keeping things challenging while allowing players of all skill levels to make it a decent way into a run before they run out of lives.

Diner Bros Inc supports both single player and multiplayer (splitscreen). I personally found both modes to be fun. The single player is basically a high score challenge as you try to survive for as many minigames as possible. The multiplayer actually offers a competitive and cooperative mode. Players can try to work together to survive as long as possible, or players can compete to see who lasts the longest. Diner Bros Inc works well both as a single and multiplayer game. Basically your preference will come down to whether you like playing these type of games by yourself or with other people. Trying to beat your previous high score is fun. Playing with other players is always fun as well though. I can see the game working really well as a party game as new players should have no trouble jumping right in.

When I first saw Diner Bros Inc I was kind of curious as the game seemed to share very little in common with the original Diner Bros outside of the name. After playing the game my opinion hasn’t really changed. While there are a couple cooking related minigames and the game may feature some of the same characters, there really isn’t anything else connecting the two games. I think the name was mostly used as the developers are trying to build a franchise and also to capitalize off the success of the original game. The game doesn’t have much of a story as each group of minigames have a couple comic book panels about how the Villain messes with the characters and how you ultimately defeat them. This isn’t a big deal as no one really plays one of these type of games for their story.

I really enjoyed Diner Bros Inc. Basically the only real issue I had with the game is just that I wish there were more minigames. The game has around 40 minigames at this point which isn’t too bad. With how quick the games are though you will be seeing them a lot. Each group only has a certain number of minigames to choose from, so unless you fail early on you likely will end up getting the same minigames multiple times during a run. I genuinely enjoyed playing these minigames so this isn’t a huge problem. After a while though you do wish there was a little more variety. Hopefully more minigames will be added to the game in a future update. The developer did a good job adding additional content to Diner Bros and already has plans on adding content to Diner Bros Inc., so I believe more will be added to the game in the future.

Because of this I really can’t give a good estimate for how much time you will get out of Diner Bros Inc. Unless you struggle with the minigames, you likely will see all of the minigames and unlock everything within just a couple hours. That is not all that surprising since most of the minigames take seconds and each run will likely take ten minutes at max. How much time you get out of the game ultimately comes down to how much you like playing the minigames and improving your high score. I don’t see it being the type of game that I will play regularly, but I can see coming back to it every so often to keep the minigames fresher. At only $10 the game seems to be at about the right price.

Ultimately I found Diner Bros Inc to be a fun minigame collection. The minigames are simple and quick to play as most only take seconds. They are quite varied though and most of them actually have more to them than your typical game from this genre. While they can start off pretty easy, they can be really difficult once you get pretty far into a run. Basically if you enjoy these type of minigame game collections you likely will enjoy Diner Bros Inc. The game doesn’t really have any story which is typical of this genre of games. Honestly the only real complaint that I have with the game is that I wish it had more minigames. More minigames are expected to be added in the future, but at this point you will end up playing the same minigames often in a longer run. Because of this it will only take a couple of hours to unlock everything, but it is the type of game that I could see coming back to every so often.

My recommendation for Diner Bros Inc basically comes down to whether you like these type of WarioWare/minigame collection games. If you don’t care for them or don’t really like playing the same minigames over and over, Diner Bros Inc may not be for you. Anyone who is a fan of this genre though and don’t mind that it doesn’t have a ton of minigames at this point, will likely have a lot of fun with Diner Bros Inc and should consider picking it up.