How to Play Dice Masters Age of Ultron 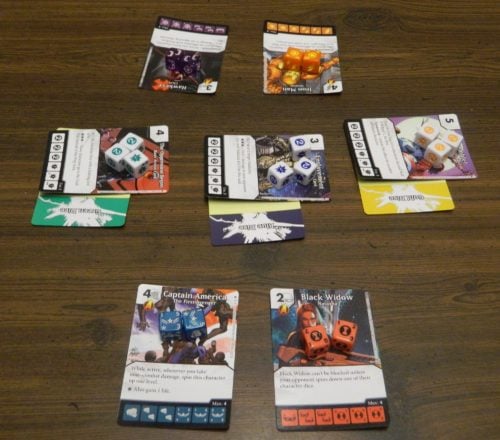 Players choose which player will start the game. 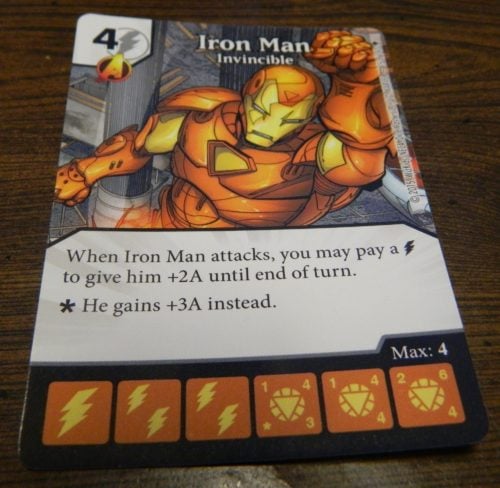 Each card in the game has a couple key components.

All dice in Dice Masters have three different types of faces.

Next is the character face. This face shows a symbol in the middle and numbers in the corners. The number in the top left corner is the fielding cost which basically means how much energy it costs to put that character into the field to either attack or defend. The number in the top right corner is the attack value of that character. The bottom right number is the defense value of the character. If there are symbols in the bottom left corner, they will activate a special ability shown on the corresponding card. 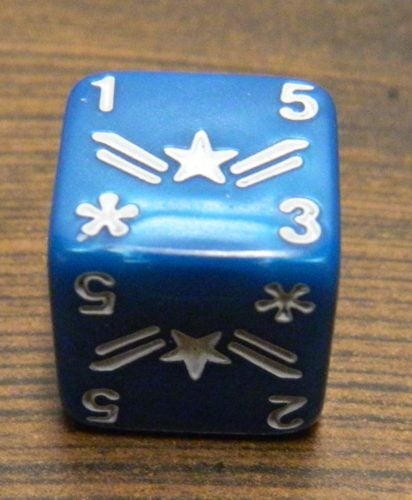 Here is one of the character faces for a Captain America dice. It will cost one energy in order to field this dice. This dice has an attack of five and a defense of three. This dice also has a symbol in the bottom left corner so it will activate the corresponding ability.

The final type of dice face are only on action dice. When this action face is rolled, the die can be used to perform the special action printed on the corresponding action card. 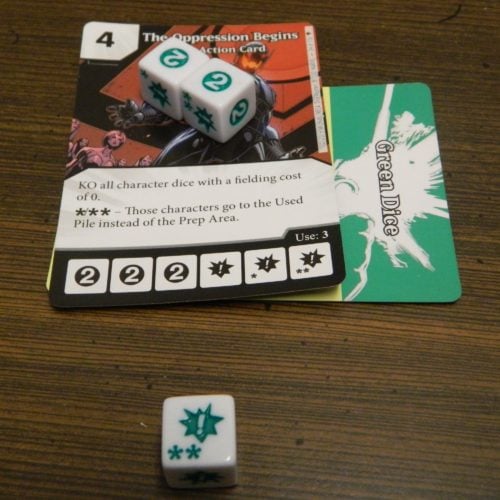 The die on the bottom shows the action symbol. If the player wants to perform the special ability on the card they can spend this dice to perform it. 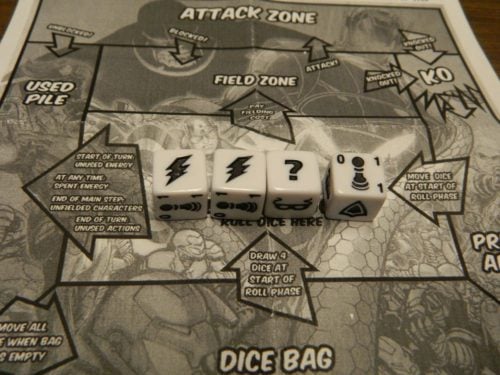 This player has rolled two bolt energy, one wildcard energy and one sidekick. If the player wants to re-roll any of the dice they can choose to.

In the main step the player will be able to use the dice they rolled.

The first thing that a player can do is purchase additional dice. To purchase a die the player looks at the number and symbol in the top left corner of the corresponding card for the die they want to purchase. In order to buy one of those dice they must spend energy equal to the number. If there is a symbol in the top left corner at least one of the energy spent has to match that symbol. When a die is purchased it is put into your used pile along with the energy you used to purchase the die. 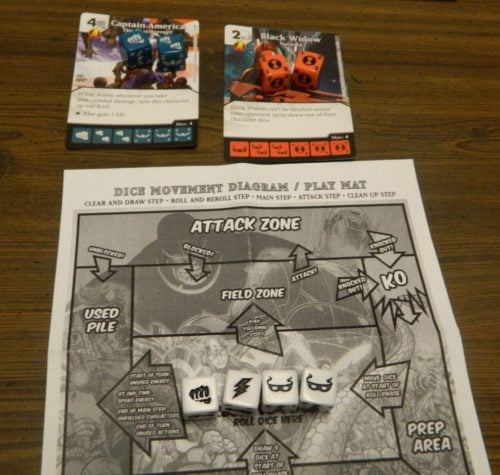 This player has one fist, one bolt, and two mask energy. The player could either buy two Black Widow dice or one Captain America die.

If there are any global abilities in play (red text) on the cards in front of either player, both players can choose to use any or all of the abilities as long as they pay the associated cost. 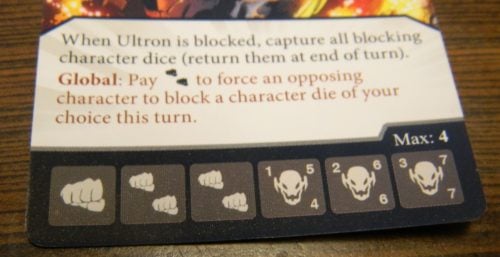 Either player can choose to use this ability if they pay two fist energy.

If you roll one of the action faces on an action dice, you can move the dice to the out of play section of your board and then take the associated action. 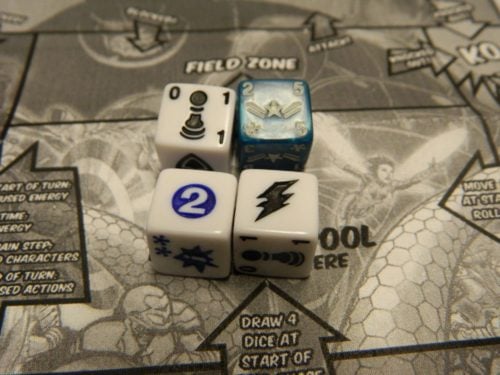 This player rolled two character faces. The sidekick can be fielded for free since it has no fielding cost. The Captain America dice requires two energy to field.

Both players are then able to apply any effects from their cards. After all effects have been applied, damage is assigned. When assigning damage you need to look at the numbers in the top and bottom right corners of the dice. The top right number is a die’s attack value and the bottom right number is the die’s defense value. Each attacker/blocker group is analyzed separately. In each fight both sides will attack and defend.

If the attack damage of one side is greater than the defense of the other side, the attacked die is knocked out.

If a die’s defense is greater than the attack, the die blocked successfully.

If an attacking die is unblocked, the die’s damage is dealt to the player’s health. The die is then moved to the used pile. 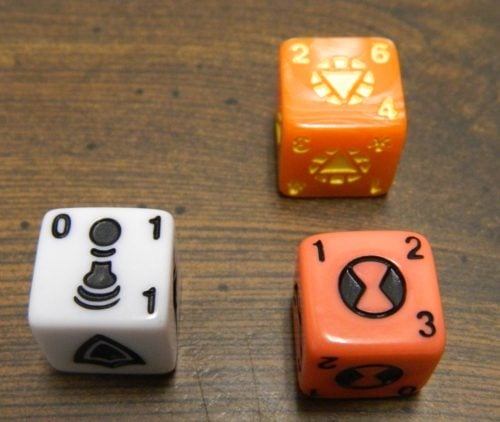 In this turn there are two different battle groups. In the first group the sidekick was not blocked and will do one damage to the top player’s health. On the right side, Black Widow fights against Iron Man. Iron Man has a higher attack than Black Widow’s defense so Black Widow will be knocked out. Black Widow’s attack will do nothing to Iron Man because her attack is smaller than Iron Man’s defense.

At the beginning of the game the players choose how much life they will start the game with (15 or 20 life is common). Player’s continue taking turns until one player’s life is reduced to zero. The player who reduced the other player’s life to zero wins the game.

My Thoughts on Dice Masters Age of Ultron

I was actually surprised when I first looked at Dice Masters’ rulebook since it was considerably longer than I was expecting. The game has quite a few mechanics for a dice rolling game which at first made it appear more intimidating than I thought it would be. While you will have a learning curve in your first game, Dice Masters is actually pretty easy to play once you get used to the rules. While you might not fully understand how everything works in your first game, by your second game you should have a pretty good grasp on the game.

While the game is pretty easy to pick up, I see it being kind of hard to master like a lot of collectible trading card games. While the game is not as strategic as Magic the Gathering and has a decent amount of luck, there is definitely strategy to Dice Masters. As you get more familiar with the game you will develop your own unique strategy. While there are superior strategies, I see the potential for plenty of valid strategies in Dice Masters that can lead to victory. This gives the game quite a bit of replayability since you can approach the game from quite a few different angles and the game will play differently based on the strategy you decide to use.

As I mentioned though the game does rely on quite a bit of luck. You don’t have to worry about drawing the right cards like in collectible card games but you do have to worry about rolling your dice well. No matter how good your strategy is, if the other player rolls significantly better than you they will win the game. The game would be pretty dull if there was no luck involved but rolling well has too big of impact on the game. I do like that game allows you to re-roll any of your dice once which gives you more options but if you roll bad twice it doesn’t really help you. While there are uses for every dice roll, if you don’t roll the right symbols at the right time, it becomes hard to accomplish what you want on a given turn.

One area that I am not sure about is the game’s length. I actually think the games are a little on the short side. I am guessing it was partly because I was pretty unlucky but in the games that I played I didn’t have much time to build out my group of dice before I lost. I am guessing that the more you play the game, the easier it will be to find ways to extend the game and overcome bad rolls. I hope so since if the game was a little longer I think there would be more opportunities for strategy which would improve the game.

For this review I am looking at the Age of Ultron version of Dice Masters. This is just one of many of the different sets that Dice Masters has. While most of the sets are based on DC and Marvel superheroes, there are also sets for the Teenage Mutant Ninja Turtles and Dungeons and Dragons. While the rules may have been slightly tweaked between different versions of the game, you could play characters from different sets of the game together since the basic rules for all of the versions of the games are the same. While they might not always work perfectly, for those of you who enjoy both Marvel and DC you could recreate fights that you always wanted to see. You could also have the Teenage Mutant Ninja Turtles face off against and work with superheroes if you so desired. I really like this component of the game since it could add a lot of variety to the game.

Being a collectible card/dice game, I see the fact that the game has booster packs as both a positive and a negative. I like that the booster packs add quite a bit of content to the game at a pretty affordable price. Most board game expansions only add a little content and yet are still pretty expensive. It is nice to be able to add a decent amount of additional content to the game for just a couple dollars. The special abilities of the different characters you get in booster packs make the game feel different and the idea of being able to choose from a large group of characters is appealing.

The problem with the booster packs is that the game basically requires you to purchase some booster packs to fully enjoy it. While the starter pack gives you a decent amount of dice, you can’t play the full game without purchasing some booster packs. While playing the game with just the starter set is still pretty fun, I see the game being considerably better when you have more cards and dice to use. The other problem is that I don’t think all of the characters are created equally. Therefore the player who spends  more on booster packs is likely to have an advantage in the game. This is one aspect of collectible card games that I have never enjoyed and I don’t like it in Dice Masters either.

The quality of Dice Masters contents are pretty average overall. For a starter set you get a decent amount of dice and cards.  The dice for the most part are solid. They aren’t the greatest quality dice but I give the game credit for creating dice with unique symbols on the different sides. The cards are designed pretty well and the artwork is good but the cards are kind of thin and tend to curl pretty easily. As far as a playmat you can get a free one online or you can purchase deluxe playmats. The dice bags that come with the starter set are really cheap so if you play the game a lot I would recommend using different dice bags.

Should You Buy Dice Masters Age of Ultron?

Overall I got quite a bit of enjoyment out of Dice Masters Age of Ultron. While the game does rely a little too much on luck, it is still a fun game. While the game might feel a little intimidating at first, once you get a hang of the rules it is actually quite easy to play. While luck will have an impact on who wins a game, Dice Masters still has a surprising amount of options as far as strategy is concerned. The game does rely on you purchasing booster packs though since while the starter pack is enjoyable, you will get more out of the game with additional cards/dice.

If you would like to purchase Dice Masters Age of Ultron you can find it online: Amazon (Starter)