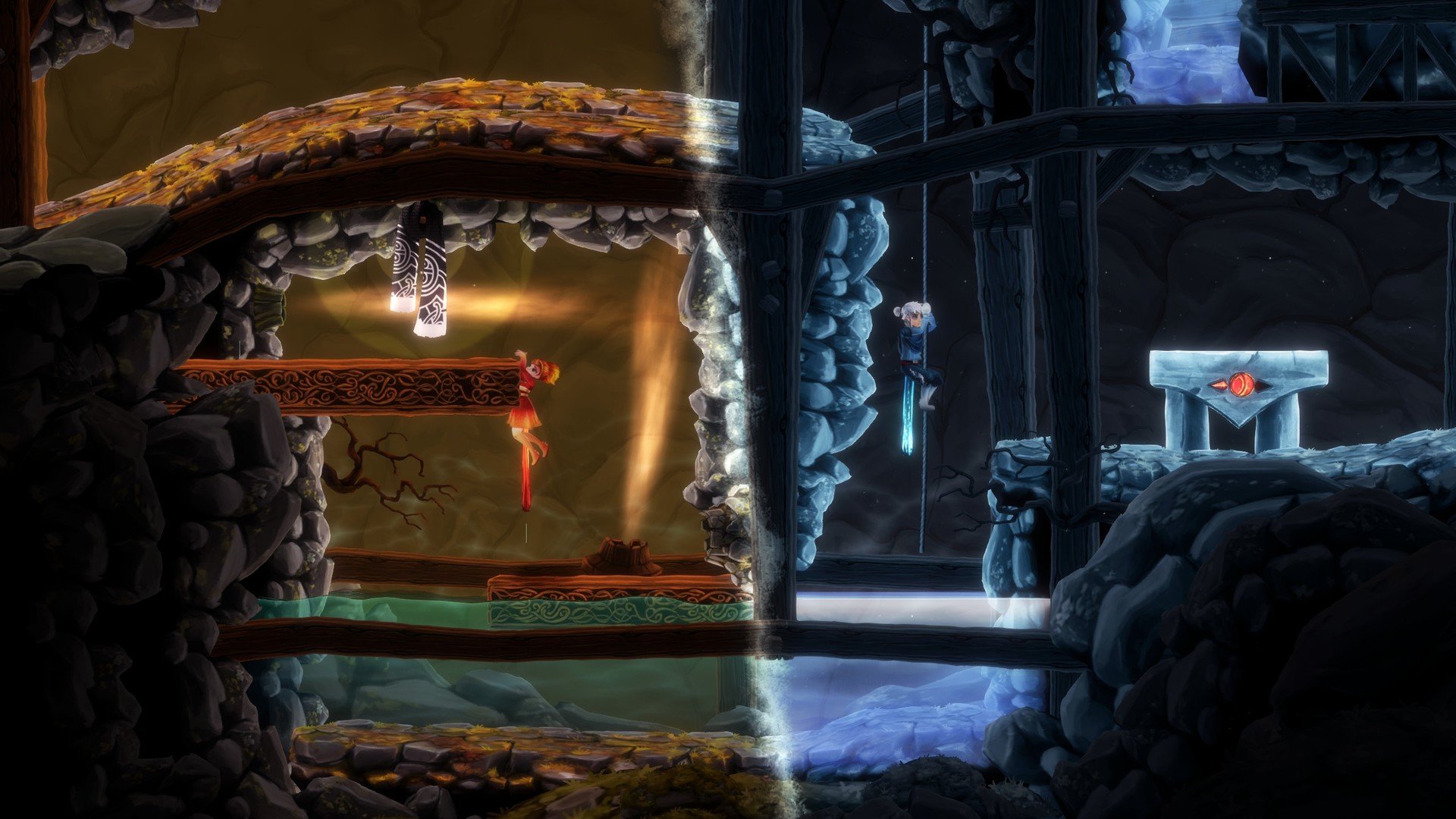 Being a fan of puzzle and cooperative games, I was intrigued when I first saw Degrees of Separation. Puzzle games are one of my favorite video game genres and ever since I was a kid I have always enjoyed playing a good co-op game with my brother. Outside of just combining two of my favorite types of games, I was interested in checking out Degrees of Separation because the game looked like it had a really interesting concept. The idea of being able to control the environment mixed with the world being split between the two characters sounded like an interesting concept for a video game. Degrees of Separation combines some really interesting puzzle mechanics to create an interesting and fun cooperative experience.

In Degrees of Separation you play as Ember and Rime. Ember has peacefully lived in her kingdom of heat while Rime has lived in a kingdom of cold. One day they both sense a danger to their kingdoms which leads to them meeting one another. When they approach one another, a mysterious force separates them. To figure out what is going on with their own kingdoms, they decide that they need to work together using their own unique abilities. As they begin their journey to figure out what is happening to their kingdoms, they discover that the worlds around them have been long abandoned for some mysterious reason. Will their journey eventually bring Ember and Rime together or tear them and their kingdoms apart?

If I were to describe Degrees of Separation I would say that it is a co-op puzzle platformer. The basic premise of the game is that both players must work together in order to reach the end of each world. Degrees of Separation doesn’t have any combat and there isn’t any way to die in the game. The gameplay revolves around using your brain to find a way to reach the end of each level. Along the way you also have to collect scarves which are used to unlock the next world.

The main mechanic in Degrees of Separation is the puzzle solving. The good news is that the puzzle solving in Degrees of Separation is good. The puzzle solving mostly revolves around using each character’s special abilities. This is where the idea of the mysterious force that keeps Ember and Rime apart comes into play. Instead of just using it for the story, it is an integral gameplay mechanic. Throughout the game there will be a line on the screen that separates the characters. This line alters its position based on where the two characters are located in relation to one another.

The idea of using abilities to manipulate the environment has been used by other games in the past in both the platforming and puzzle genres. I am always a sucker for these type of games though so I was interested in seeing how they would work in Degrees of Separation. These elements might not be highly original but the separation line makes the game quite unique. In most of these type of games you just press a button to use an ability to alter the environment. In Degrees of Separation you have to manipulate the line of separation in order to use different abilities on different parts of the environment. This is actually a really interesting twist on these type of games.

Manipulating the line of separation adds quite a bit to the cooperative nature of Degrees of Separation. The two players (or one player controlling both characters) must work well together in order to succeed in the game. The players have to work in unison as you can’t brute force your way through the game. Players have to plan out together what they are going to do so they are on the same page. This is a unique experience that I really haven’t seen in other cooperative puzzle games.

The only problem with this mechanic is that it can be kind of finicky at times. Most of the time it is pretty easy to manipulate the line to do what you want it to do. This is not always the case though. There are times where the line seems to have a mind of its own. There will be times in the game where you and your partner have to move one step at a time as you try to finesse the line into the position you want. This is usually only a problem for the more difficult puzzles so if you skip those it probably isn’t going to be that big of problem.

Speaking of puzzles I think the puzzle design in Degrees of Separation is pretty good. Each world in the game introduces its own unique mechanic which are used for the puzzles in that world. Some examples include locking the line of separation in place (world two), setting off an explosion between the two characters (world three), and temporarily eliminating one of the character’s abilities (world four). Each world uses these unique mechanics along with the basic mechanics to create their own unique puzzles. Degrees of Separation doesn’t have a ton of different mechanics but it does a good job mixing and matching them in order to make the puzzles feel unique.

I have some mixed feelings about the difficulty of Degrees of Separation. As you walk through each level you will encounter quite a few scarves. The goal is to acquire these scarves as they are used to unlock the next world. I would say that most of the scarves are pretty easy to acquire. We were able to figure out how to acquire them within a minute or two. Occasionally you will find a scarf that is quite a bit harder to acquire though. These scarves require some creative use of the mechanics and some out of the box thinking.

I generally like this distribution of difficulty as it lets players of different skill levels enjoy the game. In order to advance in the game you only have to acquire some of the scarves. We actually acquired enough scarves in the first two worlds that we accidentally skipped the third world and played the fourth world first. You probably only need to acquire all of the easier scarves in order to move onto the next world. For people that get frustrated by the more difficult puzzles, they can always just skip the puzzles they can’t figure out. They can then come back at a later time or just ignore the puzzles they don’t want to solve. Adding in the more difficult puzzles though adds difficulty to people who play a lot of puzzle games that want a challenge. It also adds some replay value to the game as you can go back and try to solve some of the puzzles that you couldn’t solve earlier.

The problem that I had with the difficulty is that it isn’t consistent. As I already mentioned, we ended up playing the fourth world right after completing the second world (skipping the third world). In our opinion the fourth world was considerably easier than the second world. We have yet to get all of the scarves in world two and some took us quite a while to figure out. Meanwhile we breezed through world four and got every scarf. This is not a normal progression for a video game as the puzzles usually get more difficult the further you get in the game. I think this is due to the unique mechanic for each world bringing different things to the table. We found it much easier to work with the unique mechanic in world four than world two.

While playing we tried to acquire every scarf we encountered but we missed/skipped a few. Degrees of Separation does a pretty good job making it easy for players to go back and get the scarves that they missed the first time through a level. Each level has quite a few checkpoints. These checkpoints allow you to automatically move to neighboring checkpoints which lets you traverse the level pretty quickly. The game for some reason never explains this mechanic though so we ended up discovering it ourselves. Each time you reach a checkpoint it also displays little symbols at the top of the screen. These symbols indicate which scarves you have collected and which you still have to find. This is quite helpful but the game could have made the symbols easier to see.

For the most part I liked the game’s atmosphere and story. I really liked Degrees of Separation’s art style. The game has a storybook style that is really well done. How the environment changes between warm and cold is seamless and looks nice. The only real issue with the artwork is that I thought the character animation looks a little weird. The walking and jumping animations look a little off for some reason. The story mostly revolves around the two main characters and the mysterious force that separates them. The story quickly devolves into a love story. I didn’t mind this aspect of the story but some people will probably find it to be kind of sappy. I personally was more interested in the world itself and what lead to the world being abandoned.

Generally I like to give an estimate of a video game’s length, but I can’t give a definitive length for Degrees of Separation. In order to get this review out in a timely matter, I have only finished around 50-60% of the game. Based on the achievements and the doors I have encountered in the castle, it looks like the game has five or six worlds along with the castle hub world. So far we have completed three of the worlds as well as some of the hub world. At first five/six worlds doesn’t sound like a lot. Each level is quite long though depending on how thorough you are with collecting all of the scarves. To get enough scarves to move onto the next world, it will probably take around 30-60 minutes as you can focus on the scarves that are easiest to acquire. With an emphasis on trying to get all of the scarves in a world, I would say most of the worlds will take one to two hours. These numbers will fluctuate based on how good you generally are at puzzle games. If this holds for all five/six levels I would estimate that the game would last around 5-6 hours if you do the bare minimum and around 8-10 hours if you try to collect all of the scarves. This is just an estimate based on playing 50-60% of the game though.

Degrees of Separation is an interesting co-op puzzle platforming game. The platforming mechanics are mostly used as a supplementary mechanic. The puzzle solving is the main attraction in the game. Most of the puzzles in the game revolve around manipulating the environment in order to reach otherwise inaccessible areas. There have been other video games that have utilized similar mechanics, but Degrees of Separation does a good job using these mechanics to create interesting puzzles. The area where the game differentiates itself is the idea of the separation between the two characters. The game forces you to use this separation line to solve most of the puzzles in the game. The puzzles are pretty clever and range from quite simple to pretty challenging so players of differing puzzle skills should enjoy Degrees of Separation.