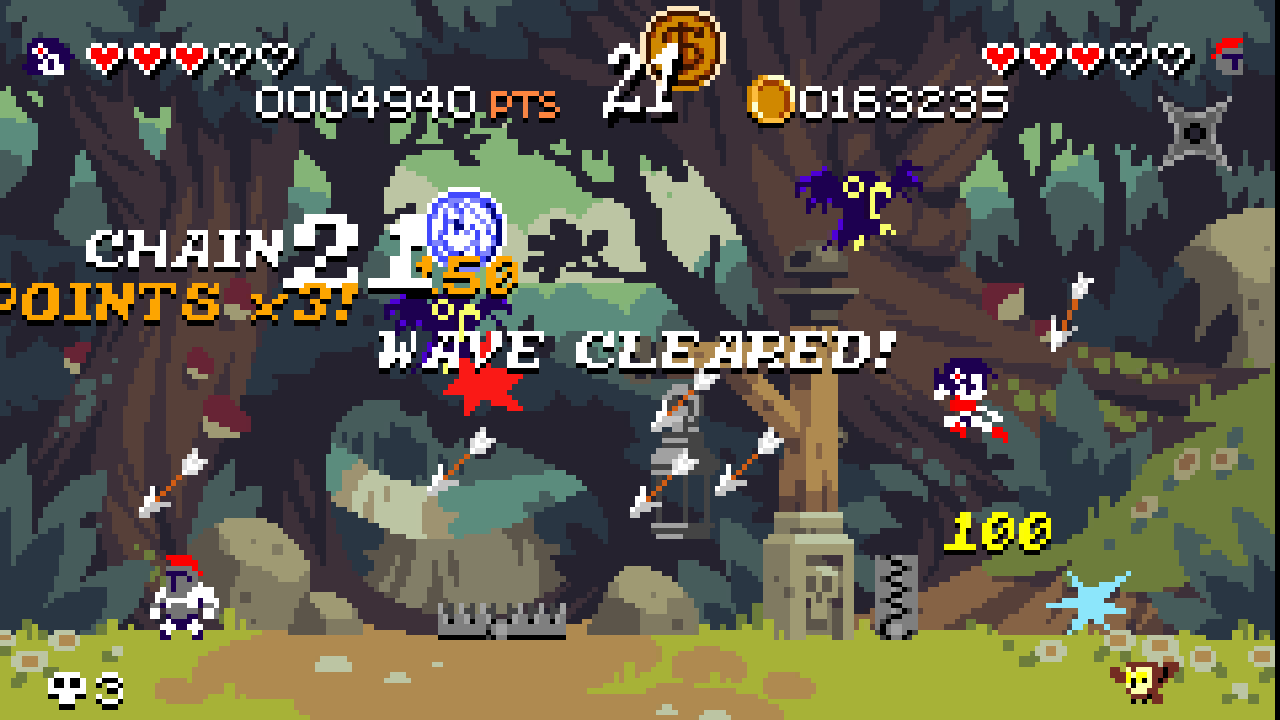 Growing up in the 90’s I played quite a few games from the 8 and 16 bit generation. A popular genre of games from this generation were the beat ’em ups. As a kid I loved games like the Teenage Mutant Ninja Turtles (it didn’t hurt that I was a big fan of the franchise as a child) and Battletoads. As technology improved the beat ’em up genre was kind of ignored by a lot of the main video game publishers. In recent years the indie game scene has done a good job revitalizing the genre.

This bring me to the game Curses ‘N Chaos which was released on Steam last week. In an homage to retro 8 bit beat ’em up games, Curses ‘N Chaos is a fun co-op experience.

A Retro Beat ‘Em Up

Curses ‘N Chaos is a beat ’em up. You and hopefully your teammate are tasked with beating up/killing all of the enemies on the screen. You have a couple basic attacks: a punch, jump kick, an upwards punch, and a running punch. Unlike a lot of the older beat ’em ups where you cleared a screen and moved onto the next screen, in Curses ‘N Chaos you stay on the same screen while the enemies come to you in waves. The basic gameplay is pretty fun overall. The game is easy to jump into and is quick paced. The controls are simple and work well. Fans of beat ’em ups should enjoy the game.

Occasionally enemies will drop items that you can either use to heal yourself or attack the other enemies. I thought the items were an interesting addition to the game. The items do a good job mixing up the gameplay since their special abilities can end up really helping you in the game. Item management is really important in Curses ‘N Chaos though. If you want to have any chance at beating a level you need to use your items well. While you want to try and use every item you get, you don’t want to waste a good item just to make room for a new item. This is why I really liked that you could use your owl to save an item so you could use it at a later time. When you want the item back you just need to press a button and the item is returned to you.

The only problem I had with the items was with how they are picked up in Curses ‘N Chaos. Whenever you run over an item the game automatically switches it with the item you are currently holding. At times this got really annoying since the item you were holding would be constantly changing. I would either have to try and avoid items I didn’t want to pick up or I had to waste time switching back to the item that I actually wanted. I think the game would have benefited by having a button that you could press when on an item to pick it up/switch it with the item you were holding.

While you can play Curses ‘N Chaos by yourself I would highly recommend against it. When I first played the game I played it by myself. While the single player game can still be fun, I wouldn’t recommend it. Curses ‘N Chaos is a hard game and it is even harder if you play the game by yourself. While there are more enemies when you play with two players, having a second player easily makes up for it since each player can focus on their side of the level which makes it less likely that you will be swarmed by enemies.

The bigger reason I would recommend the co-op is that the game was designed as a co-op experience and you are losing out on some of the experience playing the game by yourself. I enjoyed the game quite a bit more when I played the couch co-op mode with my brother. The game actually reminded me quite a bit of the couch co-op games I would play with my brother on our NES and SNES. While you can also play the game co-op online with another player, sometimes nothing beats being able to play the game with another player in the same room.

Overall the co-op works quite well. Both players have their own health area as well as an item area so both players know where they currently stand. Thankfully the game doesn’t allow you to hurt the other player or the game would have been much harder than it already is. The two players do end up sharing lives though so if one player is considerably worse at the game than the other player they may be a drain on the team’s life.

Prepare to Die A Lot

The biggest complaint I have for Curses ‘N Chaos is that the game is pretty hard. The game will definitely challenge you and you likely will die quite a few times before you are actually able to successfully complete the level. Usually you will have to become familiar with a level before you are going to be able to beat it. You need to get used to the new enemies added for each level as well as the combination of enemies present in each wave. While the game is easier if you play with another player, the game is still far from easy.

I think most of the difficulty comes from two things.

First is the hit detection in the game which causes some issues. For the most part the hit detection works pretty well. In some rare occasions you will feel like you hit an enemy and the game won’t register it as a hit. This is sometimes annoying especially for some of the air enemies. In order to hit some of the air enemies you pretty much need to hit them at the apex of your jump because they are so high in the air that you need to be as high as possible in order to have your hit register against them.

The bigger problem I have with the hit detection is that sometimes you end up being hit by enemies when it doesn’t seem like you should have been. Sometimes enemies look too far away to hit you and even their animations don’t seem to connect with your character but you still incur damage. I had some issues where I would incur some damage after hitting an enemy but not killing them. I lost a lot of health from these hits which makes the game quite a bit harder than it would have been otherwise.

Other than the hit detection the game can become difficult due to the quantity of enemies on the screen. At times the screen is full of so many enemies that it is almost impossible to avoid all of them. Usually the buildup of enemies is due to not killing the ones on screen quick enough but at certain times the game seems to send too many enemies that it is impossible to kill all of the enemies before more enemies arrive.

Looking at my Steam profile you would probably think that Curses ‘N Chaos is a short game. Currently I have only played the game for about two hours. I have not completed the game though and have a lot of the game yet to play. In order to make this review timely I have decided to review the game before I have beaten it.

From what I can tell the game appears to have thirteen levels. Each level consists of ten waves with a boss fight at the end of each level. If you are able to defeat the boss you are able to move onto the next level. The earlier levels are probably five to ten minutes long. It will likely take you considerably longer than that to beat them though since I doubt you will be able to beat any of the levels on your first try. If I had to make a guess at the length of the game, I would guess around 10-15 hours to beat all of the levels for the first time.

Being a beat ’em up, Curses ‘N Chaos has a lot of replay value. The only thing limiting the length of Curses ‘N Chaos is when you get sick of the gameplay. I think you could replay the levels several times and they should still be entertaining.

I had fun with Curses ‘N Chaos. If you like the retro beat ’em ups from the past I think you should also enjoy the game. While you can play the game by yourself, I would highly recommend playing the game with another player since the game is easier and more enjoyable with two players. The game does some interesting things with the items you pick up in the game even though I wish the game had a button that picked up the items instead of them all being automatically picked up. The graphics are also pretty nice especially if you like 8-bit/16-bit graphics.

The only significant problem I had with the game was the difficulty. Curses ‘N Chaos is not an easy game. Even with two players you will die a lot. Typically you need to play each level multiple times before you are able to beat it so you can adjust to the new enemies and the patterns that the enemies come out in.

If you like retro beat ’em ups and are looking for a good co-op game (that is a little hard) I think you should enjoy Curses ‘N Chaos.