Crime Busters is a series of three deduction/mystery card games published in 1986 by Hoyle. The game gives you a picture of a crime scene and tasks players with figuring out the answers to questions about the case.

Crime Busters begins with the selection of a moderator who gives each player (including himself/herself) a score sheet. A game will consist of three mysteries. Each volume of this game (I played and am reviewing volume three) contains twelve mysteries so you can get four games out of each.

The moderator selects one of the mystery cards and places it in the middle of the table so everyone can see and study it. They then look on the back of the other cards to find the questions that correspond with the card on the table (the numbers should match). For some reason it is not explained in the rules that the questions are on the back of a different card so make sure you do this or the questions will make no sense. 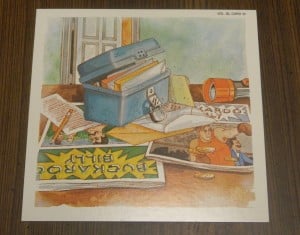 This is an example of a mystery card from Crime Busters. Players should study the scene to try to answer the questions about it that they will be asked.

After the moderator has found the proper question card, they cover the questions (so they can’t see them) and read the story of the mystery card currently being played. At the end of the story, a question will be asked. Everybody listens to the story and then studies the picture, trying to figure out the answer to the question. All players (including the moderator) write down their answers to the question and their reasoning in the bonus blank on the score sheet.

After everybody has written down their answers for this question, the moderator reads off the other ten questions. All players continue to study the scene, searching for the answers. Discussion of any kind is allowed, including attempts to mislead your opponents. All players write down their answers to each of the ten questions on their score sheets. Players may not go back and change any of their answers after they’ve been written down. After all ten questions have been asked and answered, the moderator reads aloud the correct answers by using the red decoder (even though anyone with decent eyesight can see them without even using it). Explanations for all correct answers are given on the “answers explained” cards. 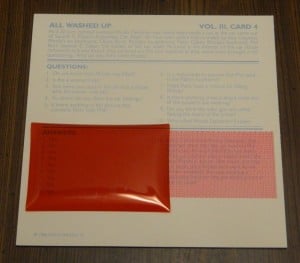 This is a sample of the questions that will be asked about the fourth scene card. Once all questions have been asked, use the pictured red decoder to find the answers.

My experiences with Crime Busters couldn’t have started any worse. For some reason, the rules neglected to point out that the questions are not on the same card as the scene is (questions for a different scene are). While this makes sense (so the moderator doesn’t have to keep picking up the scene card), it isn’t mentioned at all in the rules. So, our game started with us trying to answer questions that made absolutely no sense. We just thought the questions were really hard but it wasn’t until the answers were read that we realized we were using the wrong questions.

We probably should have known this even if it wasn’t stated in the rules but I really don’t like games that don’t fully explain their rules. I think a lot of people will make this mistake and have no idea what they are doing. Putting a sentence like “Look for the card back that matches the scene number” in the rules would have made this much more obvious.

Even with the bad start to our game of Crime Busters, we still decided to give it a chance. However, we quickly realized the game is just plain awful. First of all, there is absolutely no re-playability with this game since once you’ve played each card once you will already know all of the answers. There are no randomized elements (like Clue or most other deduction games) to the game, just the twelve case cards. Once you’ve played the whopping four games you can get out of Crime Busters, you might as well donate it.

In addition to the lack of re-playability, Crime Busters also has a terrible playtime to price ratio. You can only really play the game four times and each case should only take five to ten minutes to complete (for a total of fifteen to thirty minutes per game). That’s a maximum total playtime of two hours, which is absolutely horrible. If all three volumes were sold as one set and for the same price, that would at least be a respectable playtime but divided into three it’s a ridiculously small amount of time.

Even if Crime Busters somehow had a lot of re-playability and lasted five times as long as it does, it still wouldn’t be any good because the game just flat out stinks. A lot of the questions are leading questions, helping make them easy to answer. Most of the questions are ridiculously easy to answer while others are nearly impossible (figuring out the main question without having the other questions help lead you to the solution). Also, the entire game is just players studying a picture and answering questions about it. While Clue isn’t a great game, at least it doesn’t just give you a picture and have you answer questions about it. You actually get to move around and do stuff unlike this boring game.

Crime Busters is an awful game that even the biggest deduction game fans shouldn’t bother trying. A playtime of at most two hours with a lack of any re-playability whatsoever is unacceptable. Even if you find the game at a thrift store for a dollar, it probably isn’t worth it.

I was about 8 or 9 when I first played this game. However, I played alone and during car trips. I had to mull over the crime scenes to find the answers and the story lines to get my answers. I found it quite fun and entertaining.