At this point we have reviewed quite a few board games here on Geeky Hobbies. This includes games of various types as well as difficulties. I never thought we would review a game mostly designed for preschoolers though. Well that day has come as today I am looking at the 2015 game Crazy Toaster. As I don’t have young children you may be wondering why I have a board game designed for preschoolers? Well it is partially because I found the game for $0.50, but it is also because I have always had a soft spot for these type of dexterity board games where you have to catch a flying object. I can date this back to when I was a kid as I really enjoyed games like Flippin’ Flapjacks and Grabbin’ Grasshoppers!. I can’t say that I had high expectations for Crazy Toaster as it was a game meant for young children, and I kind of bought it as a sort of joke. As I generally like these type of games though I still gave it a fair chance. Crazy Toaster is kind of a basic action dexterity game, but it is surprisingly better and more difficult than you would expect.

How to Play Crazy Toaster

Starting with the first player and moving clockwise the players will take turns pushing down on the toaster’s nose to begin the timer for the round.

Any toast that the player catches in their pan they will get to keep. 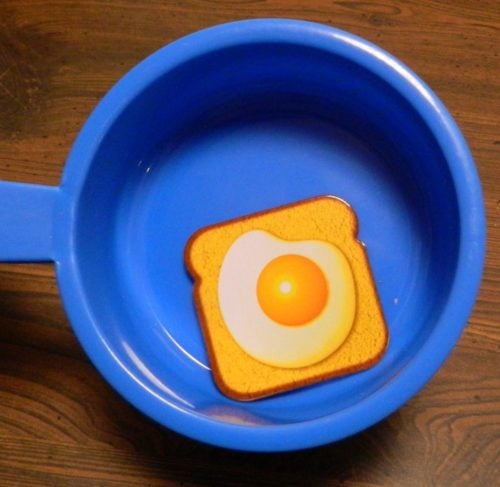 The blue player caught a piece of toast in the pan. They will place this piece of toast on their gameboard depending on whether it matches the types of toast that they are trying to collect.

Players will place any piece of toast that matches a piece on their plate on the corresponding space. 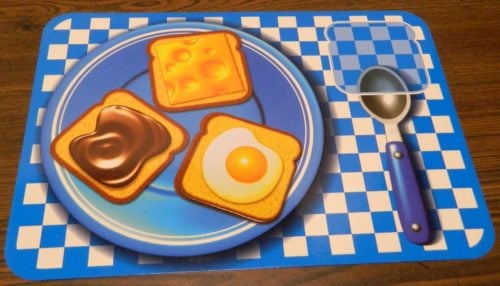 The blue player caught a piece of toast with an egg on it which was one of the types they were looking for. They will add the piece to the corresponding space on their gameboard.

Any pieces that don’t match one of the pieces on their plate will be placed on the blank space to the side of the plate. 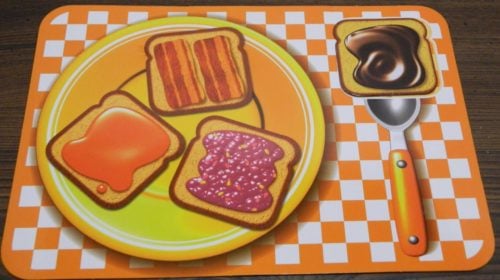 This player caught a piece of toast with chocolate/peanut butter/etc on it. As this wasn’t pictured on their plate they will put it to the side of their plate. 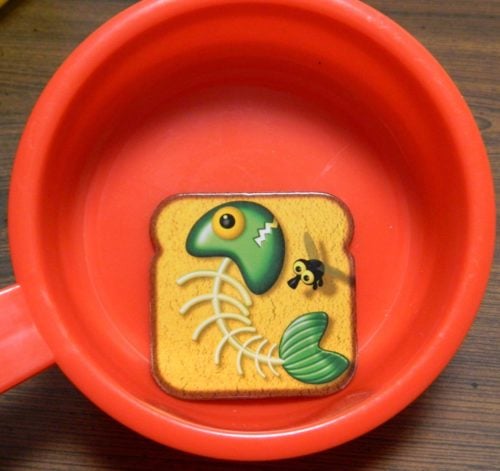 This player has caught a stinky fish in their pan. They will lose one of the pieces of toast that they have collected so far. 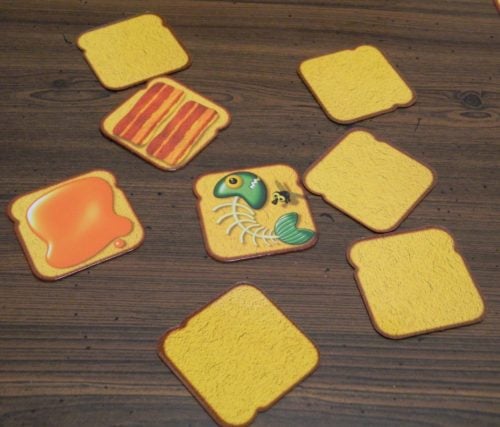 A stinky fish has landed on the table. All of the players will have the opportunity to switch non-matching toasts from their gameboard with the face down pieces of toast. 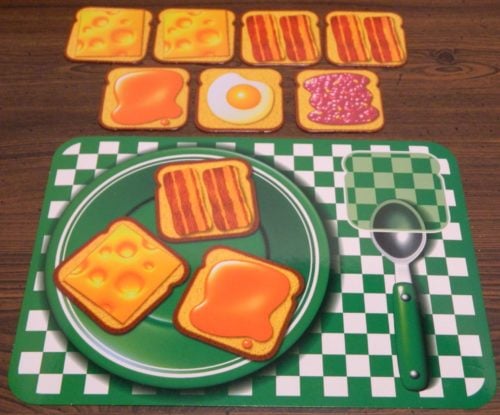 This green player was trying to catch cheese, bacon, and jelly/jam/orange spot. They ended up catching five pieces of toast of these types so they will score five points. The other two pieces of toast aren’t on their plate so they won’t score points for them.

My Thoughts on Crazy Toaster

Generally speaking I tend to avoid games with a recommended age as low as 4+. The low age doesn’t guarantee that a game will be bad, but it usually means that the game is really basic. When a game is gauged towards children that young there can’t be much to the game or the target audience will be lost. This simplicity usually leads to games that are quite boring. The one genre that can sometimes overcome this is the action/dexterity genre as you can create a simple game that is still fun to play.

When I originally bought Crazy Toaster I did so as somewhat of a joke as the game was only $0.50. As kids my brother and I really enjoyed these type of games. We still do as they may not be complex, but there is still something enjoyable about trying to catch an object flying through the air with a net, cup, or other object. Despite this I still didn’t have high expectations for Crazy Toaster because how good could a game be that was made for preschoolers?

Well it turns out that Crazy Toaster was better than I was expecting. Basically you load pieces of toast into the toaster, and then one of the players presses down on the toaster’s nose which starts a timer. When the timer stops it triggers the toaster which launches 0-4 pieces of toast into the air. The players then must use their pan to try and catch the flying toast. While the game has other mechanics which I will get to later, this is the basic premise behind the game. The mechanic is far from original, but it is still surprisingly enjoyable for some reason. I don’t know why, but I have always had a sort of soft spot for these type of games and the same holds true for Crazy Toaster. People who like these type of catch the object flying through the air games may be pleasantly surprised by Crazy Toaster.

How could I possibly enjoy a game made for preschoolers despite not playing it with any children? Other than the fact that I have always liked these type of games, the game is surprisingly more difficult than you would expect from a young children’s game. I don’t mean that the game is hard to play. You can literally teach the whole game in one or two minutes. Instead the game is surprisingly challenging. In my opinion this helps the game overcome the fact that it was made for younger children. The game’s difficulty can be attributed to two things in my opinion.

The first contributor to Crazy Toaster’s challenge is the fact that you have no idea where the toast will be shot. Toast can be shot from up to four different slots in the toaster. You have no idea how many pieces will be shot out or from which slots they will be shot. This leads to toast usually randomly shooting out of the toaster. The toaster is quite a bit more powerful than I initially expected as it can launch toast faster, higher and farther than I expected. This will lead to toast flying everywhere. Be sure to keep track of where the toast flies or it might be pretty easy to lose pieces under and behind furniture. Due to how the toast can fly everywhere it is hard to predict where it will go. This forces you to have a good reaction time if you want to succeed in the game.

Even if you can track the toast well in the air it doesn’t mean that you will be able to catch it. The game requires good hand eye coordination. My group is generally pretty good at these type of games and yet we still had a much harder time than you would expect. This is due to two factors. First our group gets pretty competitive in these type of games so our pans regularly hit one another preventing either of the players from catching the piece of toast. There is also the fact that the toast would regularly bounce out of the pans. I don’t know if it is due to the plastic that the pans are made of, them not being deep enough, or how the toast flies; but a lot of the toast pieces bounced out of player’s pans. We tried playing the game holding the pans however we wanted and then using stiff arms and wrists. Of the two using a stiff wrist made it easier to catch toast even though it was still more difficult than you would expect.

The additional challenge can be seen as both a positive and a negative for the game. On the negative side it may make the game somewhat frustrating for young children as they will likely miss a lot of the pieces of toast. On the positive side though it makes the game more enjoyable for other audiences. One of the biggest concerns that I had for Crazy Toaster was that it was going to be way too easy. That was not the case as it is arguably one of the hardest/most challenging games that have probably ever been made for preschoolers. If the age recommendation would normally scare you away from Crazy Toaster even though you normally like these type of games, this extra challenge may keep you interested in the game.

Other than the catching toast mechanic Crazy Toaster is a pretty bland game. Basically you are trying to catch toast of the types on your plate as the other types don’t help you. You also want to avoid the stinky fish toast as it will only hurt you. This aspect of the game doesn’t make much sense as it is hard enough catching the toast that you can’t take any time trying to see what is on the toast before you try to catch it. Thus there really is no strategy to what pieces of toast you try to catch. Occasionally you will get to exchange your worthless toast for a chance to get a piece you need. There isn’t any real strategy to the game though. You basically have to just try to catch as many pieces of toast as you can and hope you catch the right types. Having to catch specific types of toast just adds unnecessary luck to the game.

So what about Crazy Toaster’s components? Based on my copy of the game I thought they were pretty good. Due to the nature of the game it is somewhat easy to lose pieces of toast so many used copies of the game will likely be missing one or more pieces of toast. The toast pieces are made of thick enough cardboard where they should last if taken care of. As for the toaster itself I thought the toaster in my copy works well enough. The toaster randomly shoots the toast around while generally favoring one direction. There are also times when no toast is shot out. For the most part though it works pretty well. This doesn’t seem to be the case with all of the toasters though as some people’s toasters seem to break pretty quickly. Therefore the quality of the toaster seems to vary quite a bit.

Should You Buy Crazy Toaster?

Heading into Crazy Toaster I can’t say that I had high expectations. Games that are made for young children are usually terrible since they are so basic that they become quite boring. I have to say that I was pleasantly surprised though. Don’t get me wrong Crazy Toaster is far from a complex game and many people will think the game is pretty stupid. Yet I enjoyed the game quite a bit more than I expected. For the most part it is your typical game where you have to catch items that are shot into the air. It may be meant for young children, but the game holds up comparably with most games from this genre. This is mostly because the game is quite a bit more challenging than you would expect. This is due to the toaster randomly shooting toast into the air and toast regularly bouncing out of pans. Outside of catching toast in your pan though the rest of the mechanics are pretty generic where I think the game would probably be better if the player who catches the most toast would win.