Back in the 1840’s a man named Thomas Cook came up with the idea of creating commercial vacations. He and his son John Mason Cook ended up forming the company Thomas Cook and Son which offered comprehensive trips to locations all over the world. These trips proved popular as they offered travel opportunities to people who otherwise couldn’t afford to travel. The company’s name was eventually shortened to Cooks Tours which brings us to today’s game. Prior to playing the game I had never heard of Cooks Tours which is not that surprising as the travel agency industry has all but died out at this point due to the internet. While I didn’t have high expectations for the game, I wanted to give it a chance as it is odd to find a board game based on a travel agency. Cooks Tours European Travel Game tries to combine a spin and move game with a trivia game but just ends up being a pretty boring game.

A player begins their turn by spinning the spinner. They will move their pawn forward the number of spaces on the outer ring of the spinner. The players will move towards London first and will continue moving clockwise around the gameboard. 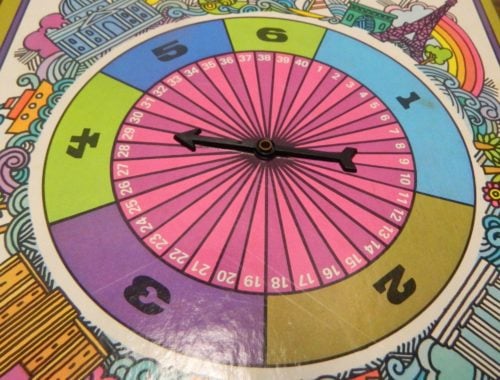 This player spun a four so they will move their piece forward four spaces.

When a player reaches a starred capital city they will stop even if they had spaces left to move. If this player was the first player to reach the city, they will take the corresponding souvenir card. 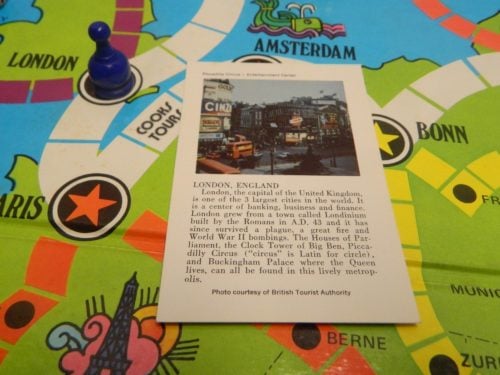 The player will then spin the spinner. The inner number will determine which question the player will be asked from the corresponding section of the question booklet. 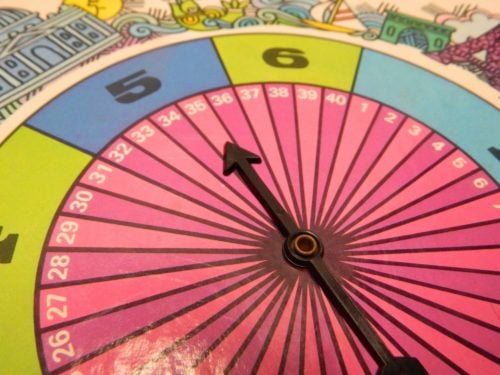 This player has spun number 35 so they will have to answer question 35 from the corresponding section of the question booklet.

If the player does not answer correctly, they receive nothing and their turn ends. If the player guesses correctly they will receive a coin based on their current location: 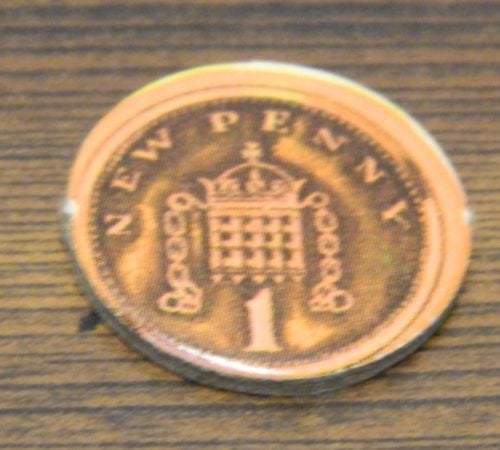 The player correctly answered the London question so they will receive a one point coin.

After visiting one of the stared capitol cities, the player will chose whether they want to continue on the main journey or if they would like to take a sidetrip. If they want to continue along the main path they will spin the spinner and move the corresponding number of spaces. If they chose to take the sidetrip they will roll the dice. They can either use one or both of their dice to move clockwise around the colored path. While on a sidetrip players are trying to land on one of the cities. If they are the first player to reach a city, they will take the corresponding souvenir card. 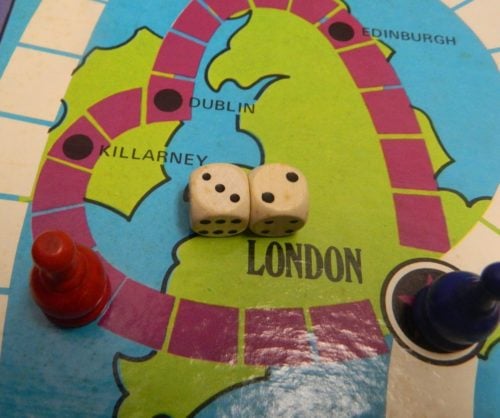 The red player has rolled a two and a three. The red player could use the three to land on Killarney or use both dice to land on Dublin. If the city they land on hasn’t been visited yet they will receive the corresponding souvenir card.

Some other rules that must be followed while on a sidetrip are as follows: 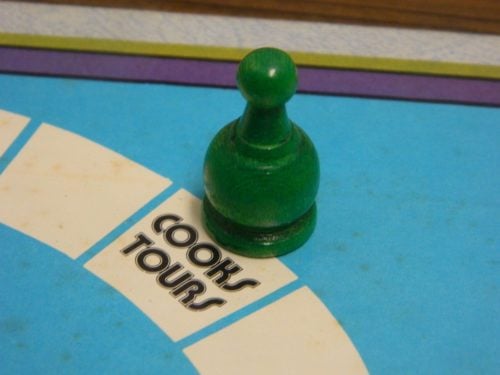 The green player has landed on a Cooks Tours space so they will get to answer a question to determine if they get to spin and move again this turn.

The game ends when one of the players have moved around the entire gameboard and have reached the start space again. 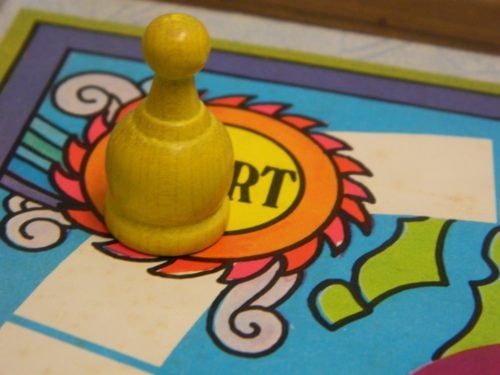 The yellow player has moved through the entire board and has returned to the start space so the game ends.

For coins the players will receive the following points:

The players will also receive points for the souvenir cards they acquired:

If I had to break down Cooks Tours European Travel Game into its most basic features I would probably say that it is a combination of a roll/spin and move game with a pretty generic trivia game. You spin to move around the board and then answer questions about the cities you visit. Answer correctly and you receive points. Players can also go on sidetrips which rewards them with souvenir cards if they can exactly land on cities. The player who collects the most souvenir cards along with correctly answering the most questions ultimately wins the game.

As the roll/spin and move mechanics are pretty self explanatory, I am going to begin by briefly talking about the trivia mechanics. Basically each time you reach a city the game will ask you a question about a landmark in the city you are visiting or the country in general. I would say that I have a decent knowledge of Europe but at the same time I have never visited Europe and I don’t know a lot about most European landmarks. I have to say that the trivia aspect of Cooks Tours European Travel Game is quite a bit more difficult than I was expecting. While there are some pretty easy questions, I would say that a majority of the questions are pretty difficult if you have never been to Europe before. If you don’t know a lot about Europe you are going to have a hard time with the trivia aspect of the game.

The trivia portion of the game is not helped by the fact that the game is a little outdated at this point. The game was released in 1972 so at this point the game is 46 years old. On the bright side a lot of the questions in the game are not time sensitive as the answers shouldn’t have changed over time. On the negative side some of the questions tend to focus on things that aren’t as relevant as they were in 1972 which likely will make the trivia more difficult.

While I wouldn’t say that I am a fan of Cooks Tours European Travel Game, I do want to give the game some credit for adding some things that you don’t typically see in these type of games. While it is debatable how well it works, the game deserves some credit for actually adding some decision making to a genre that mostly just involves spinning/rolling and moving your piece around the gameboard. I found the idea of the sidetrips to actually be kind of interesting. The sidetrips give players a choice as they can either continue along the main path; getting ahead of the other players, collecting the main city souvenir cards and getting the bonus points at the end; or trying to land on the sidetrip cities which are worth more points. I have not played the game nearly enough to know which is the better option but I appreciate that the game actually gave players a decision to make which will actually impact the outcome of the game.

While on the topic of the sidetrips I also appreciated that Cooks Tours European Travel Game is a game that realized the value of letting player choose between using one or both of the dice they rolled while moving around the sidetrip. While this seems like a no brainer, especially since it would be really hard to land on specific space otherwise, many games from this era never included this mechanic. You just had to get lucky and roll the exact number needed to land on a specific space. Getting the choice between one or both of the dice allows players to have some choice over how they move through a sidetrip which makes it quite a bit easier to land on a specific space and collect a souvenir card.

On the component front I will say that I think Selchow & Righter could have done a better job. Maybe it was just my copy of the game but the coins in particular were either misprinted or miscut as many of the coins have sections that were meant to be part of the dividers. The card quality is also kind of thin even though I appreciate that each of the cards feature a picture from the location as well as a decent amount of information about the city. The gameboard has some charm of a bygone era of board games but it could have been quite a bit better as well.

At the end of the day Cooks Tours European Travel Game is a pretty boring game. Our group honestly had a hard time finishing the game. The problem with the game is that it is a very generic roll/spin and move game mixed with a trivia game. While I will give the game a little credit for giving the players some decisions with regard to taking sidetrips, the movement mechanics are no different than thousands of other games and are just plain boring. The trivia mechanics are decent if you are interested in European tourist attractions but are otherwise pretty boring as well. They are also pretty challenging unless you are really familiar with Europe. This is all topped off with pretty sub par component quality.

Basically if you have no interest in European tourism trivia, there isn’t anything for you in Cooks Tours European Travel Game. If you are interested in European trivia you may have a little fun with the game but with how generic the game is I wouldn’t recommend picking it up unless you can find it for really cheap.

If you would like to purchase Cooks Tours European Travel Game you can find it online: Amazon

I played this game as a kid back in the early 70's. I vaguely remembered it -it was neat to find this summary. thanks!