While this cult comedy might not have quite reached its fans’ goal of six seasons and a movie, Community was able to leave a lasting legacy and is widely considered to be one of the best network comedies made in the last decade. The series never got huge ratings and it was even cancelled and forced to move to the short-lived streaming site Yahoo! Screen, but it was certainly a survivor (ultimately airing 110 episodes over six seasons). While all seasons of Community had already been released on DVD (including a Complete Series release), this is the first time any season of the show is available on Blu-ray. Comedies aren’t really the genre of shows you think of when you are looking for shows to upgrade to high-definition, but Mill Creek Entertainment has done a great job with their Community: The Complete Series release on both Blu-ray and DVD.

Community is about a cocky but lovable lawyer named Jeff Winger (played by Joel McHale), who is forced to go to community college when it is discovered that his degree from “Columbia University” is not legitimate. While he plans to phone his college experience in and do the least amount of work possible until he gets his degree and can become a lawyer again, he does form a Spanish class study group in an attempt to score with an attractive woman named Britta (Gillian Jacobs). However, this quickly becomes a legitimate study group and he grows closer and closer to the members of the group, even befriending them. Other members of the group include Abed (a film student and obsessive fan of TV shows and movies), Troy (a former hot-shot high school quarterback who lost his scholarship due to an off-the-field injury), Annie (the classic overachiever who was forced to go to community college due to an addiction to Adderall), Shirley (a single mother who is going through a divorce and decides to go back to school so she can start a business), and Pierce (a millionaire desperately trying to re-discover his youth). Episodes usually have two or three storylines a piece featuring different character pairings but they all also feature at least a few scenes with the whole group together. Episodes are often extremely meta (usually thanks to Abed) and Community put together a lot of unique episodes like “Abed’s Uncontrollable Christmas” (a stop-motion animated Christmas episode similar to the Rankin/Bass specials), a puppet episode, one that involves “alternate timelines,” and the annual paintball episodes the show was known for.

As with almost all TV comedies (except for maybe Arrested Development), of course it took Community awhile to find its footing. The first season is definitely uneven, with some episodes showing the potential that would eventually pay off in droves and others being below average with few laughs. The second half of season one gets a bit more consistent and the show really hits its stride in season two. While I haven’t gotten to it yet, season four is considered to be a step down (and while seasons five and six were supposedly better, they don’t have the high ratings the early seasons have). Conveniently, the fourth season was the only one that Dan Harmon wasn’t in control of. I haven’t watched them yet but I suspect these later seasons are kind of like the fourth season of Arrested Development. Still entertaining and worth watching, but a shell of its former self that makes you long for the glory days. For the episodes I have seen, I would definitely consider Community to be a top-tier TV comedy. It definitely deserves to be mentioned in the same breath as some of the other best network comedies of all-time (like Arrested Development, The Office, and Seinfeld). The humor of Community is mostly a mix of meta humor and pop culture references (including the use of many popular tropes). This is the type of show that would develop a single joke over three seasons, with the payoff happening in the background. That joke involves one character saying “Beetlejuice” every season until he appears upon the third mention (just like in the movie). Jokes like this that you have to pay attention to are a pretty common occurrence in this series, so I would definitely compare the show to Arrested Development in some ways (though it differs significantly in other ways).

Community is well known for the large amount of talent it put together; both the cast and crew are filled with talent (some of which are huge stars nowadays). Donald Glover is now a megastar, Alison Brie has moved on to the starring role of another cult-classic TV series (GLOW), and Danny Pudi and Yvette Nicole Brown get pretty steady work. That’s not even counting the three actors that were pretty well-known before Community even hit the air (Chevy Chase, Ken Jeong, and Joel McHale). This series also had a lot of well-known guest stars including Jack Black, John Goodman (in a multi-episode arc), Anthony Michael Hall, and LeVar Burton. Behind the scenes, Dan Harmon (now of Rick & Morty fame) created the series and the Russo Brothers (the directors of Avengers: Infinity War) were executive producers and directed 33 episodes of the series (usually individually). Community did have a lot of turnover in the later seasons with Dan Harmon being forced out for season four (he returned for the last two seasons), Chevy Chase leaving the show partway through the fourth season after disagreements with the cast and crew, Donald Glover moving on from the show in the early part of season five, and finally Yvette Nicole Brown leaving before season six.

I am not an expert on video quality but with Community: The Complete Series I was actually able to compare the picture quality of this release to the first season DVD release. I watched the same episode on Blu-ray and DVD at the same time and I could definitely see a big difference. Of course the video quality isn’t perfect (network TV comedies usually don’t need to look amazing) but for a value priced release, I think there is enough of an upgrade here to make it worthwhile for most fans of the show. If you don’t own the series already, you should definitely pick this release up. If you don’t care that much about video quality, you don’t really need to upgrade but if you don’t already own the DVDs, the Blu-ray set is a very good value to begin with (or you can buy the even cheaper DVD release Mill Creek Entertainment put out alongside the Blu-ray).

Extras include commentaries on “almost every episode” (apparently all but season six), over an hour of outtakes and gag reels, webisodes, deleted scenes, and over three hours of behind-the-scenes featurettes (including a 42-minute feature about the making of an episode). Almost all of the bonus features from the original DVD releases are included, though some are apparently upscaled to high-definition. The only things missing are some season two extras (three of them focusing on the “Abed’s Uncontrollable Christmas” episode). While the few omissions are a bit disappointing, there’s still a wealth of extras included in this set. The outtakes are often hilarious and I even listened to a few of the commentaries and was entertained by them (I usually skip commentaries because I have so many other things I want to watch). Comedies tend to have more interesting extras than most other genres and Community: The Complete Series is no exception. 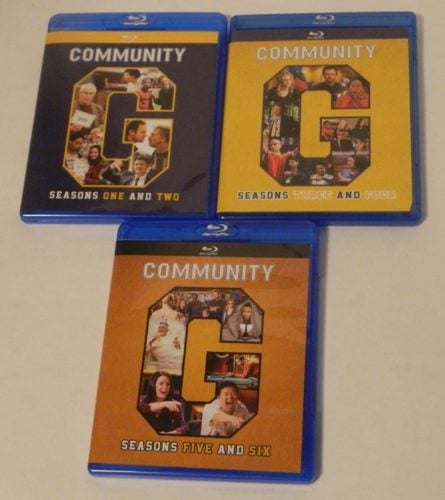 The packaging on this release is hit-or-miss but considering the value price Mill Creek Entertainment is selling this release for, I’m not too disappointed. This release includes three different Blu-ray cases, each containing two seasons (housed in an outer box). Each season is forced to share one disc holder, meaning two discs are stacked on top of each other for the entirety of the packaging. I’m sure some people will be a bit disappointed by this but I much prefer this type of packaging to what Mill Creek Entertainment used to use. Blu-rays are pretty hardy and shouldn’t be at risk of damage from just being stacked two high. The outer box used to house the three Blu-ray cases is a bit disappointing though. It’s quite weak and is actually a bit too big to hold the cases (meaning it will likely get a little smushed when you shelve it next to anything else). The good news is that the individual cases work perfectly fine on their own and even say which seasons they hold, so you could probably just throw out the outer box if it bothers you too much.

Overall, I am very happy with Mill Creek Entertainment’s release of Community: The Complete Series on Blu-ray. The show itself starts a little slow but it quickly evolves into one of the best network comedies of the last decade. If you haven’t seen the show yet, you really need to give it a try. This release comes loaded with extras (and good ones at that) and the video quality is pretty good for a network comedy TV series. It isn’t perfect but you can definitely see a major upgrade in picture quality. Approximately $55 (on Amazon at least) for a Blu-ray complete series of a great show is a pretty nice deal so I highly recommend Community: The Complete Series.

Community: The Complete Series was released on Blu-ray and DVD on October 23, 2018.

Scarabya Board Game Review and Rules