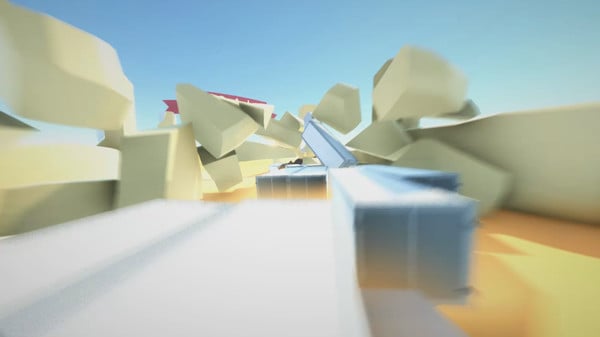 
A staple of the action movie genre is the idea of performing stunts on the top of moving vehicles. From jumping between vehicles to fighting the bad guys this idea has lead to some exciting moments for action movies. What I find interesting is that there really aren’t many video games that have tried to craft this idea into an action game. This is a great premise for a platforming game since you are just replacing your typical platforms with moving vehicles. Well Clustertruck decided to take advantage of this action movie staple and ended up creating an original, exciting, and fun platformer.

In Clustertruck you play an unseen hero that is trying to make their way from point A to point B. In a normal game you could run, walk or drive from one point to the other. That is not the case in Clustertruck. In Clustertruck you have to jump between speeding semi-trucks that are constantly getting destroyed by various traps. In the world of Clustertruck you are only allowed to touch the top or sides of the trucks since touching anything else will automatically lead to you failing the level.

When I first heard about Clustertruck a while ago, it was a game that I was really interested in trying out. How could you not be interested in a platforming game where you are forced to jump between speeding vehicles? After playing through most of Clustertruck’s levels I have to say that even though I had high expectations for the game, Clustertruck ended up meeting all of my expectations.

The main reason why I believe Clustertruck is so enjoyable is the game’s feeling of speed and action. The game feels like you are in an action movie. As you are speeding along, trucks are crashing and exploding all around you. In a lot of the levels there is chaos everywhere. While the game may look like chaos to observers, the game is more straightforward than you would think. While it takes a little while to adjust to jumping between trucks, once you get a hang of it the game is actually quite easy to play due to the responsive controls.

The basic setup of the levels are quick little scenarios that introduce and utilize the different mechanics introduced throughout the game. Pretty much every level is only around 15-20 seconds long. The game relies on quick thinking and reflexes to avoid dangers that pop up in your path. With everything going on around you, you always need to be on your toes since one truck crash can easily cause a chain reaction that affects many other trucks.

Regarding difficulty I would say that Clustertruck is a little uneven. The game doesn’t really have a steady ramp up of difficulty from level to level. You will get a couple easy levels, then get some more difficult levels, and then it is back to some easier levels. While I haven’t quite finished all of the game’s levels, I don’t really see Clustertruck becoming a really difficult game. There are some levels where you will die a lot but with how short the levels are you can quickly restart the level and correct your mistakes. With enough practice and some luck (more on this soon) you shouldn’t have too much trouble beating any of the game’s levels.

At this time I have played Clustertruck for around 3.5 hours. I have currently completed 76 of the game’s levels. There are apparently around 90 levels included with the game. Unless there is a drastic increase in difficulty I expect to be able to finish the game in around 4-4.5 hours. While I have almost finished the game, I can see wanting to go back and replay quite a few of the levels since as you acquire more special abilities and actions you could approach the levels in different ways to improve your score/time. The real length of the game may come from the Steam Workshop though. The game includes a level editor where players can make their own levels and share them with other players. If Clustertruck develops a strong community of level creators there could be tons of additional levels to play which will really add to the length of the game.

While I love the randomness and craziness of Clustertruck, it actually contributes to the only significant issue I had with the game. Clustertruck at times has issues with being too random. While the trap and truck layouts seem to be fixed for each level, the trucks seem to drive differently each time you play a level so rarely will the same thing happen each time you play a level. This is a good thing in making the game feel more random and can lead to more replay value. The problem comes from the fact that you sometimes have to get lucky to complete a level. In some levels you have to wait for a run where the trucks drive in a way that allows you to complete the level. Sometimes you will encounter situations where almost all of the trucks are destroyed which makes it next to impossible to complete the level. While I like the idea of the randomness, it kind of sucks to lose a level with there being nothing that you could do to prevent it.

I had high expectations for Clustertruck and the game actually met them. If you like platformers and think the idea of jumping between moving vehicles sounds like an interesting idea, I think you will love Clustertruck. I had a blast with the game since how could you not love an original platformer that feels like you are playing an action movie. While not all of the levels are great, some of the levels are fantastic. Add in Steam Workshop and Clustertruck could have an almost unlimited amount of levels to play. Really the only complaints I have about Clustertruck is that I wish the game had some more levels created by the developers and I wish the game didn’t have the occasional issue of creating no win situations for the player.