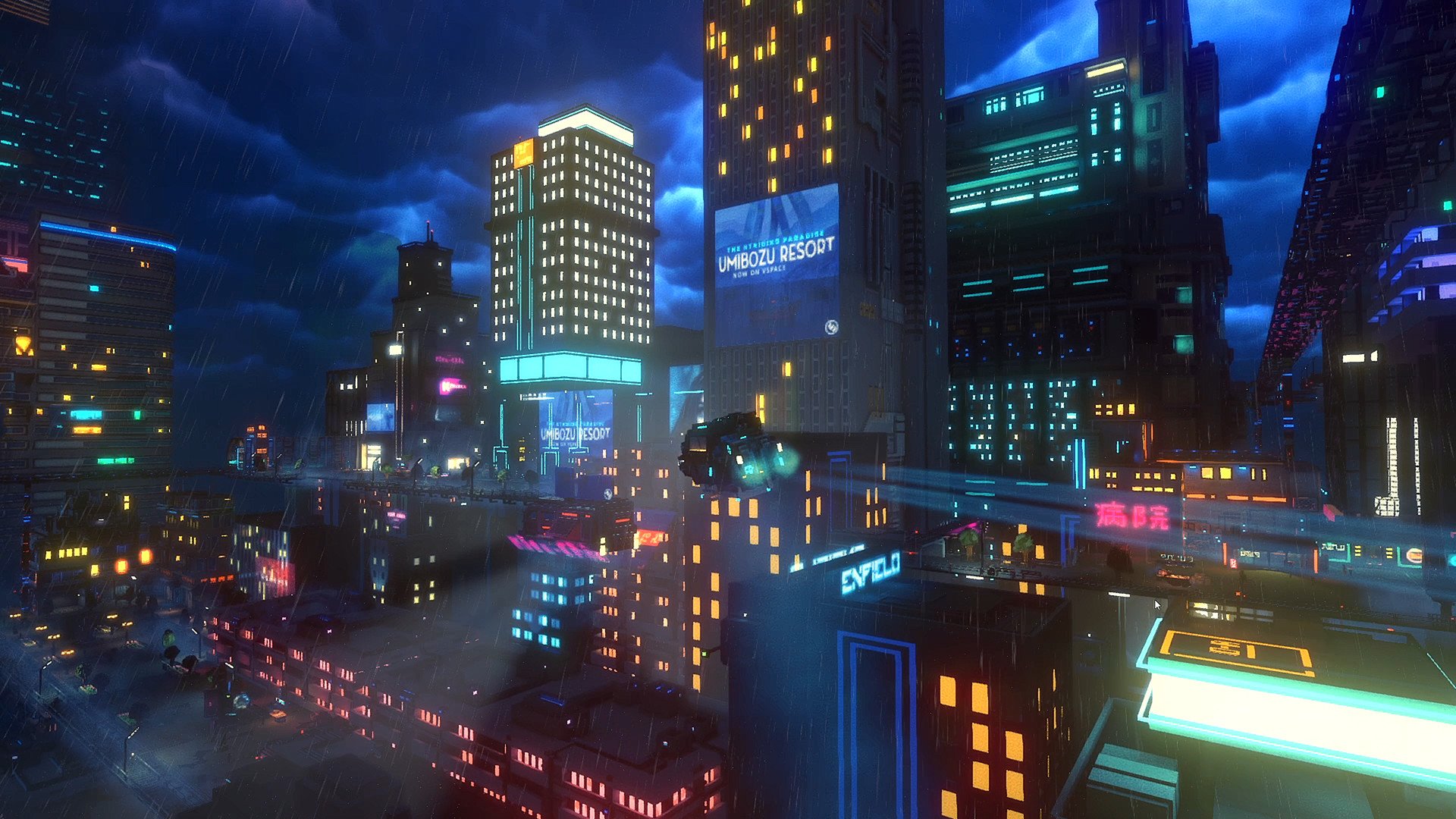 As a big fan of sci-fi I have always been interested in stories set in the future. While I am not as big of fan of cyberpunk as some people, I still find the setting to be quite interesting. Pretty much every fan of cyberpunk is eagerly awaiting the release of Cyberpunk 2077, but back in April Cloudpunk released on PCs and received generally positive reviews. A couple days ago the game was ported to Nintendo Switch, PlayStation 4, and Xbox One. Thanks to receiving a review copy for the game on PlayStation 4 I got the opportunity to check out the game. Cloudpunk may at first just seem like a futuristic delivery driver simulator, but it has depth under the surface due to the immersive atmosphere and compelling story.

In Cloudpunk you play as Rania in the distant future where humans, androids, and AIs coexist. After being forced from her home and family Rania moves to the city of Nivalis. She gets a job at Cloudpunk a delivery service that is at best semi-legal. As you make deliveries around the city you soon learn that everything is not as it appears in Nivalis.

The gameplay in Cloudpunk is pretty simple. As a delivery driver the gameplay revolves around picking up and delivering packages. This entails traveling on foot and in your hover car. Throughout the night you will be given jobs from your employer and you will find various sidequests as you explore. The city is broken up into a number of sections that you can walk around. You mostly pick up the package from one location, get into your hover car, fly to your next destination, park your car, and start the process all over again. During some missions you will be given the option to choose one of two options which has a little impact on the overall story. You can also visit shops to purchase items, and upgrade your apartment and vehicle.

At this point there are probably a decent number of people who are wondering if that is all there is to the game? For the most part the previous paragraph does a good job outlining all of the game’s gameplay. In many ways the gameplay feels like working as a delivery driver in the future. You could sum up the gameplay as one large fetch quest as you pick up items and then take them somewhere else. There really aren’t any puzzles, risk of death, or time pressures that mix things up. After an hour or two of gameplay you should have a good idea of what the rest of the game will play like as it doesn’t drastically change. If this doesn’t sound all that interesting, Cloudpunk is unlikely to be for you.

On the surface Cloudpunk’s gameplay might not sound all that interesting. I will admit that the gameplay could use a little more variety as you basically do the same things over and over throughout the game. Despite this I actually still enjoyed the gameplay quite a bit. Cloudpunk is one of those games that are just really relaxing to play. There is just something really satisfying about driving around the city picking up and delivering packages. The game doesn’t seem to give you any time limits so you can take your time and not feel rushed to make it to your destination in time. This allows you to explore the world as much as you want.

Probably the main reason why the gameplay is satisfying despite not being particularly deep is due to the atmosphere. Cloudpunk relies heavily on the cyberpunk futuristic city theme. Novalis is a city in the clouds with towers that stretch high into the skies. It is clear that the game took a lot of inspiration from sources such as Blade Runner and other pinnacles of this genre. For the most part the game does a great job creating a unique atmosphere.

This begins with the visuals. Cloudpunk utilizes a voxel/blocky based style. This generally works well for the game. For an indie game the city of Novlis is considerably larger than you would expect. This does lead to a number of loading screens which are kind of annoying as the map has to be broken down into sections. In addition to covering a large area the city is quite large vertically. With your hover vehicle you can go up and down at will with some upper and lower limits put in so you don’t end up drifting to areas where there is nothing to do. I was quite impressed with how vertical the city is though. While flying through the city it genuinely feels like you are flying through a futuristic city in the sky. The locations you travel to feel unique and bring a lot of character to the game.

I will say that the graphical style does let the game down at times though. The buildings and city itself look fantastic. The robots and other objects you encounter in the world look nice as well. Basically anything that is normally square/rectangle looks really good. The problems arise when it gets to the actual humans and androids. These characters are also derived from voxels. If you are a big fan of the style you might appreciate the style. I felt that they kind of stuck out though. Outside of dialog I honestly couldn’t tell which characters were humans and which were robots as both looked robotic. This doesn’t ruin the game, but I found the design of the characters themselves to be kind of distracting.

With Cloudpunk’s gameplay being kind of basic your enjoyment of the game thus relies quite a bit on the story. I thought the story was pretty good. The gameplay has an overarching story about Novalis and things not being exactly as they appear. The game also features quite a few little stories you encounter along the way. Basically every delivery you make in the game has its own little story attached to it. The game mostly uses these stories to give you information about the world as a whole, but many of them are interesting in their own right. A lot of them stick to basic sci-fi stories, but there are some interesting new stories as well. I genuinely found the game to be pretty funny at times and there are some heartwarming and sad stories as well. People who typically enjoy story driven games and sci-fi in general will probably really enjoy the story of Cloudpunk.

As for Cloudpunk’s length it is going to depend quite a bit on what type of player that you are. This is mostly because the game is at its heart an exploration game. Those that are willing to explore and take their time are likely to get considerably more time out of the game than those that just rush through the story. If you just stick to the main story, ignoring side quests, I would estimate that most players could finish the game within around 7-10 hours. For completionists that are willing to complete all of the side quests and pick up all of the hidden items scattered throughout Nivalis, the length is likely to jump to 11-15 hours.

Cloudpunk is neither a perfect game nor a game that will appeal to everyone, but I enjoyed playing it. The gameplay basically boils down to delivering packages in a futuristic city. This is going to turn off some players since in a way the whole game feels like a gigantic fetch quest. I found the gameplay to be pretty satisfying though. The game does a good job matching the gameplay with a more relaxed setting where you can take your time and really immerse yourself in the atmosphere. The world itself is large and does a fantastic job making you feel like you are exploring a futuristic city. This is combined with a compelling story. I can see the game not appealing to everyone, but I enjoyed my time with Cloudpunk.

My recommendation comes down to your feelings towards the atmosphere/story and the gameplay. If the delivery gameplay doesn’t sound all that interesting or you don’t care for story driven games, Cloudpunk is unlikely to be for you. Those that enjoy a more relaxed gameplay experience set in a interesting world and story will likely enjoy the game and should consider picking it up.