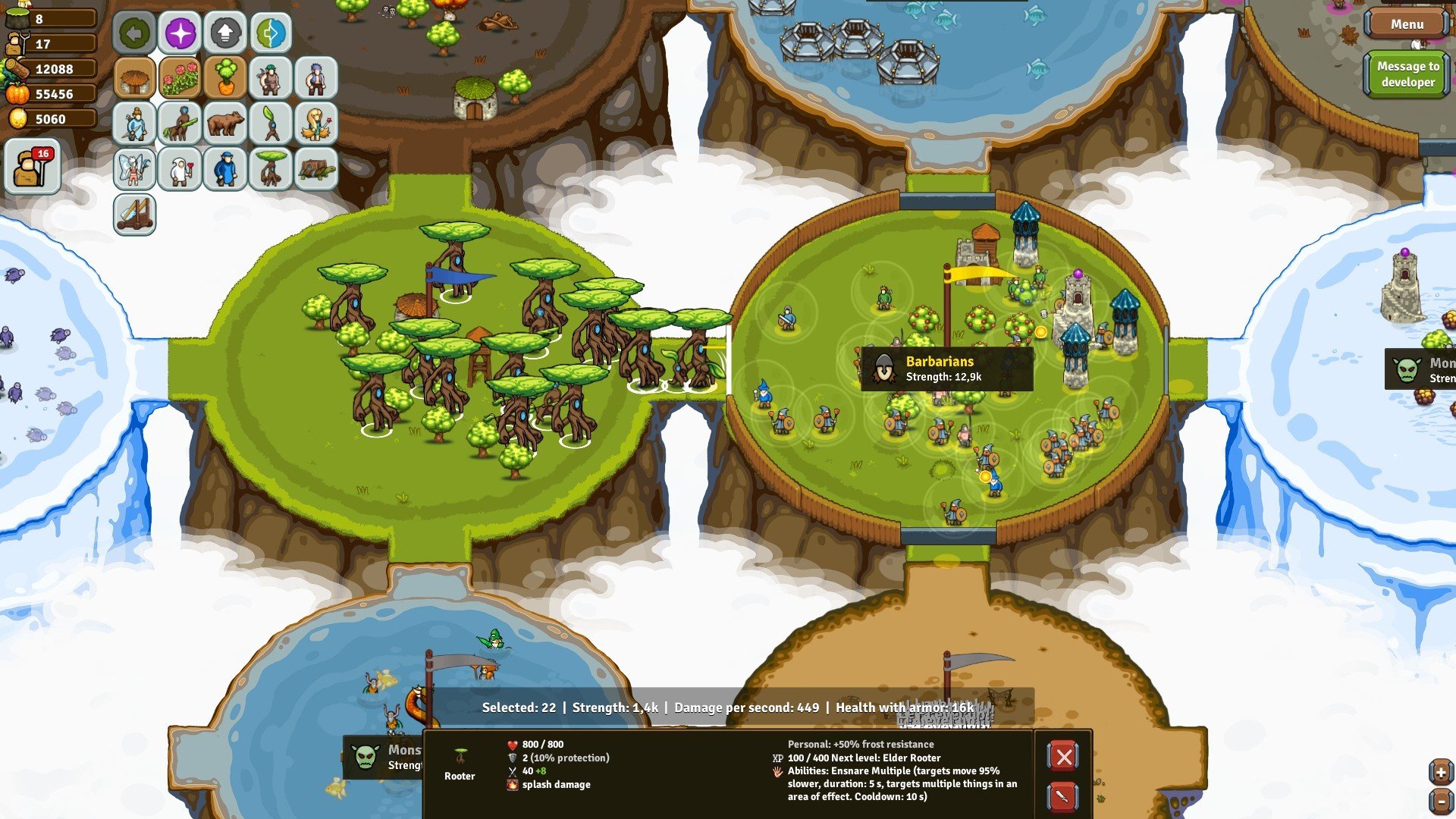 Back in April I took a look at Circle Empires Rivals. While I had high hopes for the game, I was still pleasantly surprised by it. The game had an interesting take on your typical RTS by streamlining it to the point where you can finish games pretty quickly. Since it was first released the game has added a number of free updates to the game which have added additional content to the game and balanced the gameplay. Today the game’s first DLC Forces of Nature was released. As a big fan of the main game I was excited to try it out to see how the new additions would change the original game. Circle Empires Rivals: Forces of Nature adds some new interesting twists to the gameplay while still maintaining what was enjoyable about the original game.

This shouldn’t come as a surprise to anyone but Circle Empires Rivals: Forces of Nature follows the motto of most DLCs which is not to break what is already working. Circle Empires Rivals: Forces of Nature doesn’t drastically change the gameplay from the original game. You are still in charge of circles which you use to generate resources and build up your army. You use your army to defend your circles as well as take over neighboring circles. The ultimate goal is to either capture all of the circles or eliminate your opposition. The DLC maintains the fun and addicting gameplay of the original. Instead of repeating myself about everything I liked about the original game I would just recommend checking out my review of Circle Empires Rivals. In this review I would rather talk about what the DLC adds to the original game.

I would say that the biggest new addition from the DLC is a new game mode called Terraform. This mode shares a lot in common with most of the other modes. The goal is still to take control of all of the circles. Resource generation and how you control your army doesn’t change in any significant way. The one major change is the ability to terraform circles that you already control. With this ability you can change a circle’s terrain from one type to another. You can choose to change a terrain to one that provides you more resources or one that gives you a defensive advantage. Changing a circle’s terrain is simple as you only need to place a totem/special building corresponding to terrain you want the circle to change to. This costs resources with more valuable terrain types costing more. A couple of seconds after you place the special building it will transform the circle into the new terrain type.

While this mode plays a lot like most of the other modes, I thought it was an interesting change of pace. At the beginning of a level you can’t use the mechanic all that much as the cost of many of the terrain types are high enough that they will significantly slow down your building plan. As you progress through the game though their costs are low enough that you can basically terraform every circle that you want. Want to increase your resource production? Simply change to a terrain type that generates more of the resource type that you want. Is part of your empire vulnerable to attack? Put in an acid pit that deals damage to an unit that moves through it. This change won’t drastically change your strategy, but it allows you to tweak things to make your strategy work even better.

I enjoyed the Terraform mode, but I will say that the mode will probably work better in competitive modes against other human players. You can take advantage of the mechanic against the AI, but it doesn’t have the same impact. It is nice turning your circles into terrain types that generate more resources. Where the real strategy comes from though is placing the terrain types that can be used in a more defensive capacity. This will help when the enemy AI attacks you, but I think it will better serve you when you have to outwit another player. In competitive PVP I think players could really like the Terraform mode.

In addition to the new mode the other big addition in Circle Empires Rivals: Forces of Nature is new leaders and units. The game adds two new leaders who have their own unique units that they can send into battle. This leads to the game adding 20 new units to the game mostly consisting of more fantastical creatures which includes fairies and quite a few animal units. Some of these units are variations on other units already in the game with some slight tweaks. There are a couple types of units that should have some interesting impacts on strategies though.

First the game adds a couple units that actually generate resources over time. These units are quite powerful as they can work as soldiers while also providing you with resources. Due to their power though you can only build one of these units for each circle you currently control (unless you use the setting that eliminates these requirements). Another unique unit is a giant turtle which basically acts as a transportation unit. Sick of units that take forever to move between circles? Load them into the turtle and you can transport them much quicker. Finally the game includes a cannon type unit that works like a normal cannon, but can also launch your units into a neighboring circle. I found these new units to be pretty interesting and I am curious to see how they will change the competitive modes.

The final addition in the DLC is the addition of a 16 page lore/art book. This PDF is basically a look at the world of Circle Empires Rivals and the various factions. I am generally not a huge fan of art/lore books, but I thought it was a nice distraction. The book is not particularly long as you can read through the whole thing in just a couple minutes. It does give some interesting background to the world though, and it can genuinely be pretty funny at times. If you don’t really care for these type of books it won’t really matter all that much to you. It is a nice little addition to the DLC though.

Ultimately Circle Empires Rivals: Forces of Nature is pretty much what you would expect from DLC for the game. The new Terraform mode is interesting even though it doesn’t drastically change the gameplay. Being able to change the terrain of the circles shows promise especially in competitive PVP games. The DLC also includes a number of new units. Most are just variants on units already in the game, but there are a few units that should have interesting impacts on the gameplay. The DLC also includes a lore book which fans of the game should enjoy. Ultimately fans of Circle Empires Rivals should enjoy the DLC.

My recommendation comes down to your opinion of the original game. If you have never played the original game I would suggest checking it out if you like the premise before you pick up the DLC to see if you like the gameplay. Those that didn’t really care for the original game probably won’t find the additions to be enough to change their opinion. Those that enjoy Circle Empires Rivals though should enjoy their time with Forces of Nature. Whether fans should purchase it right away or wait for a sale depends on how much they liked the original game, how much the new content intrigues them, and how much length matters to them. I would say that the biggest issue that I had with Circle Empires Rivals: Forces of Nature was that I just wish it had a little more content. You will ultimately have to decide whether the additional content is worth the full retail price of $5 or if you should wait for a sale.