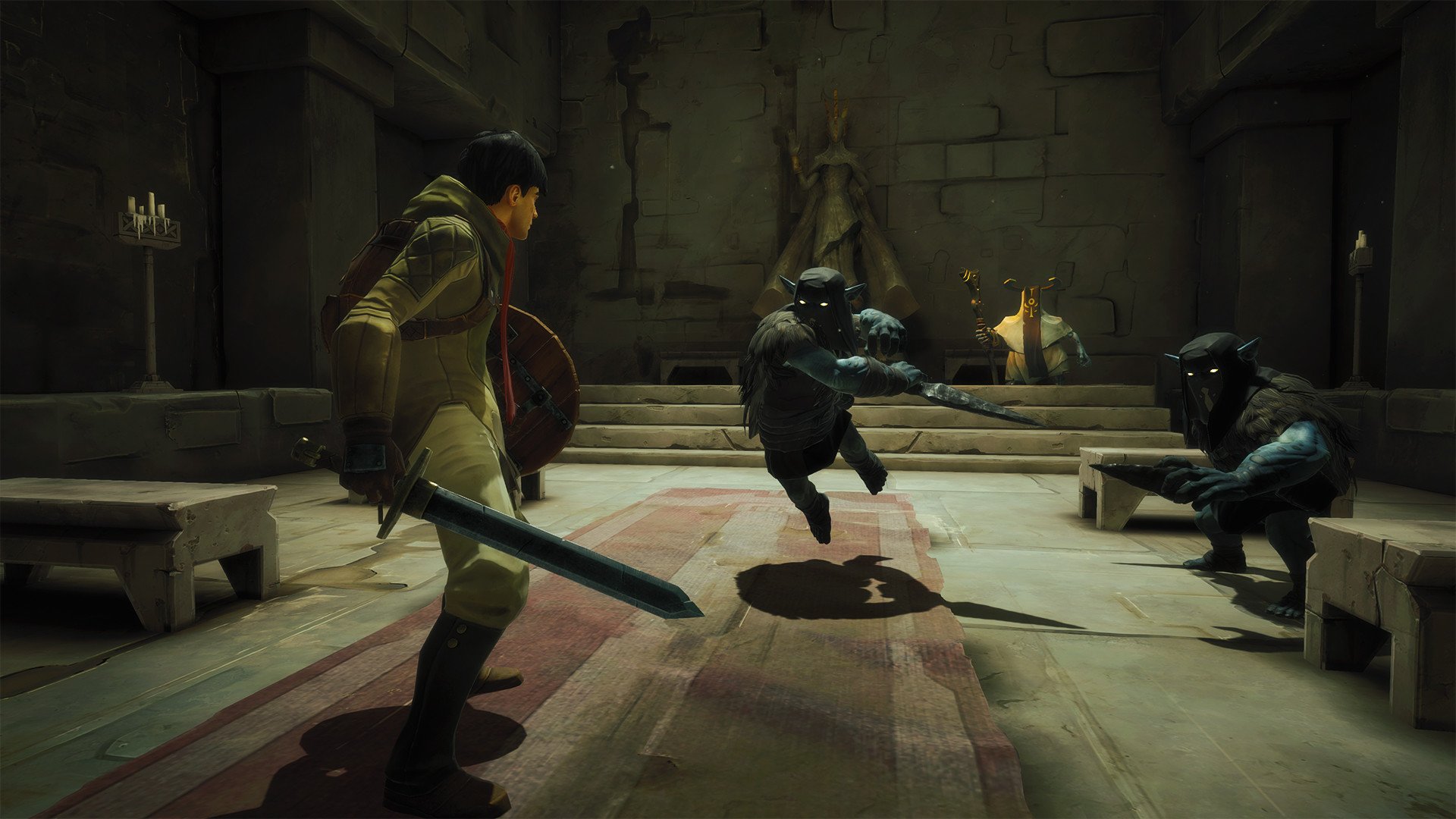 Today I am reviewing the action adventure Souls-like game Chronos: Before the Ashes. The game is not exactly a new game as it is mostly a remake of the 2016 game Chronos, and also the prequel to the game Remnant: From the Ashes. Those who haven’t really gotten into VR probably never got the opportunity to play the original game as it was a VR exclusive. Chronos: Before the Ashes takes the original game and adapts it to work outside of VR while also updating the visuals. While I wouldn’t consider myself to be a big fan of the “Souls-like” genre, I thought the game seemed interesting enough that it was worth checking out. Chronos: Before the Ashes can be a little frustrating at times, but it is a compelling and satisfying adventure for fans of the genre.

In Chronos: Before the Ashes you play as a unnamed hero who is tasked with saving their people. A dragon threatens the kingdom and you are sent to a mysterious labyrinth to stop it and any other evil forces that stand in your way. There is a twist to the labyrinth though as whenever you die you will lose a year of your life. Can you make your way through the labyrinth and save your people from the dragon?

In many ways Chronos: Before the Ashes is similar to your typical Souls-like game. The gameplay is based around melee combat as you are given a shield and a choice between a number of different melee weapons. The game includes buttons for a light and heavy attack, as well as a block, parry, and dodge. The combat is more methodical than your typical action game as you need to avoid or block enemy attacks as they can deal a lot of damage. Being able to avoid taking damage is arguably more important than dealing damage in the game. In addition to the combat mechanics there are a number of light puzzle elements which basically come down to discovering objects and figuring out where to use them.

One of the distinguishing elements of Chronos: Before the Ashes is that like the Souls franchise, you want to avoid dying whenever possible. Whenever you die you lose that year of your character’s life and will restart your journey once again one year older. The game has a number of checkpoints that you unlock throughout the game which allows you to fast travel as well as giving you a place to re-spawn after dying. Every time you die though all of the enemies re-spawn so you have to defeat them once again.

This is the element of Chronos: Before the Ashes that I am most conflicted about. As a Souls-like game, it can be pretty punishing at times. As I haven’t played many games from this genre I can’t directly compare its difficulty. The game does have three different difficulty levels that mostly impact how much damage each enemy attack deals. Those familiar with the genre might not find it as difficult as other games from the genre, but those who don’t play many games from the genre will likely think it is pretty hard. Basically the game is built around approaching combat carefully. If you just go into battle mashing buttons you will die quickly. The key to success is blocking and dodging enemy attacks, and getting in some quick hits inbetween. The controls for the most part seem responsive as when you die it is likely going to be your own fault. There were a few occasional issues where the environment seemed to get in the way which impacted dodging enemy attacks, but otherwise there weren’t really any issues.

On the positive side the difficulty made the combat pretty rewarding as I felt a sense of accomplishment when I made progress in the game. I have to say that I have never been that great at precisely timing blocks and dodges. Those more familiar with this type of combat will likely find the game to be easier than I did. There is real skill in the combat as you can’t just mash buttons and expect to survive more than a couple encounters. Enemy attacks deal a lot of damage so you want to limit how often you are hit. You will acquire a number of “health potions” that you can use each run, but they don’t last long if you get careless in combat. This sense that you could die at any moment does add some excitement to the game as you have to always be on your toes.

This is a double edged sword though because the game can be frustrating at times. Death in the game can come at a pretty big cost. Certain things you achieve on your run will remain in place, but pretty much all of the enemies you defeat will come back for each run. Therefore to make any real progress in the game you need to reach a checkpoint or unlock a shortcut during a run. Otherwise your run doesn’t really accomplish much outside of gaining experience and improving your skills at combat as you will have to defeat all of the same enemies again. As a gamer that doesn’t like having to replay the same sections of a game over and over again, this got a little frustrating after a while.

On top of this the game’s world can be a little hard to navigate at times. I would say that much of the world is pretty straightforward and linear as you just follow the path forward. The world is interconnected though. This makes it a little hard to navigate at times unless you have a good sense of direction. There is no map that you can look at so you have to either remember how to get to past locations or wander around until you find the right location. The game requires you to backtrack at times as you acquire an object that has to be brought to a prior location. This will likely lead to you becoming lost at times in the game. The biggest problem with getting lost in the game is that you will end up having to re-fight the same enemies over and over again. Therefore you could end up dying several times just trying to figure out where you are supposed to go next.

While Chronos: Before the Ashes shares a lot in common with your typical Souls-like game, one area where the game differentiates itself is its age system. Basically in the game your character is only allowed to visit the portal that takes them to the labyrinth once a year. Once you “die” you have to wait a year to have another chance at succeeding in your journey. This only takes a loading screen for you as the player, but as your character ages it starts to have an impact. In their younger years they are stronger and more agile so you can spend experience points more freely in those areas. As you age though those skills become more limited as you are forced to focus more on your magical ability.

At first this might seem like a gimmick, but the game really feeds off of it. Each death in the game is more than just a death as your character ages and forces you to approach the game in a different way. This adds a sense of consequence for each death as you want to accomplish as much as you can in each year. Each decade that passes in your character’s life also gives you access to new abilities based on how your character has changed over the last decade. While it sucks when you lose a decade of your character’s life, these new abilities can really give you that boost you need to get over a difficult section of the game. While this mechanic might not revolutionize the genre, I thought it did a good job making Chronos: Before the Ashes stand out.

In addition to adding an interesting new mechanic, the aging mechanic also helps with Chronos: Before the Ashes’ overall atmosphere. I thought the game’s atmosphere was actually really interesting. The game utilizes both a modern/futuristic setting as well as a more traditional fantasy setting. The game utilizes more of a low key approach to the story as much of it is told through items you interact with as well as the environment itself. The game’s world looks nice and does a good job creating a world you will want to explore.

Before wrapping up I wanted to quickly talk about the fact that Chronos: Before the Ashes is essentially a remake of the 2016 game Chronos. I never played the original game so I can’t give you a definitive comparison of the two versions of the game. For the most part the game seems to be exactly the same. The world itself, the layout of the enemies, and the puzzles seem to be exactly the same. The first major difference is that the game is no longer a VR game. For those that don’t have a VR system or don’t like playing these type of games in it, this will give you the opportunity to play the game like every other third person action adventure game. The other difference is that it seems like the graphics have been upgraded some. I thought the game’s graphical style was pretty good.

When most people see Chronos: Before the Ashes they might think that it is just another typical Souls-like game. In many ways the game does share a lot in common with the genre. The game is focused on melee combat in a more methodical way. You can’t just rush into combat mashing the attack button or you will die quickly. Whenever you die all of the enemies are re-spawned so you lose a lot of your progress. Instead the combat relies on blocking, dodging, and taking your time attacking. I had some mixed feelings about this. When you succeed the combat is really satisfying, and the controls are pretty responsive where it is usually your fault when you die. Losing so much progress can become a little frustrating after a while though. It doesn’t help that it is sometimes kind of easy to get lost in the game. Outside of the combat, the game utilizes an interesting ageing mechanic as each death ages your character which eventually forces you to alter how you play the game. The game’s atmosphere is also quite engaging as well.

My recommendation for Chronos: Before the Ashes is pretty simple. If you have never cared for the Souls-like gameplay I think you will find the game to be more frustrating than enjoyable. Those that want a challenging combat experience with an interesting atmosphere though should enjoy their time with Chronos: Before the Ashes, and they should consider picking it up.

Chronos: Before the Ashes

Where To Purchase: Nintendo Switch, PlayStation 4, Steam, Xbox One