Released back in 1973 Perfection is a game that most people have probably played at least once in their lives. The premise is simple. Try to get all of the shapes into their proper space before you run out of time. When I was a kid I remember playing Perfection and enjoying it outside of the tension that came from not knowing when the board was going to pop up. The game was quite successful which is shown in the fact that the game is still made to this day. To capitalize on its success there were a number of spinoffs created in the 1970s and 1980s. One of them was Challenge Perfection which was created in 1978. The premise behind Challenge Perfection was pretty simple as it is basically a multiplayer version of the original game. Challenge Perfection is a decent attempt at turning Perfection into a multiplayer game even if it doesn’t really do anything to distinguish itself from the original game.

How to Play Challenge Perfection 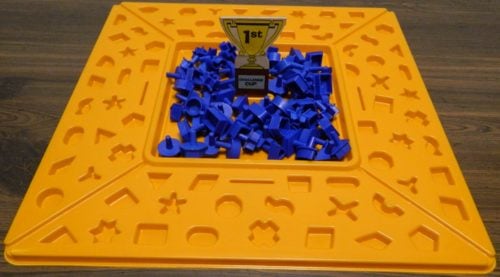 This player has placed a piece on their side of the board.

When a player fills in all of the spaces on their side of the board they will grab the Challenge Cup which ends the current round. Players will then score points based on how many of their spaces that they filled in. The winner will score 25 points. The other players will score one point for each space they filled in for a maximum score of 18.

All of the pieces and the Challenge Cup are returned to the center of the tray to prepare for the next round. The tray is turned one position so each player will have different shapes that they need to find. The next round is then played in the same way.

The game continues until all of the agreed upon rounds have been played. The player that scored the most points will win the game.

If there are only two players each player will have to fill in two adjacent sides of the board.

If you are playing with younger children you may want to consider filling in some of their spaces before the game begins to make it a little easier for them.

My Thoughts on Challenge Perfection

Lets get right to the point. Challenge Perfection is basically multiplayer Perfection. That basically sums up the entire game. While you could technically play the original game multiplayer it basically boiled down to each player taking turns and whichever player placed the most shapes or did it quickest was declared the winner. Challenge Perfection changes that by having all of the players compete at the same time. In the middle of the table there are pieces to fill in all of the spaces on the board. Players have to race to find the shapes that fit their spaces before the other players.

Adding the competitive element to the game doesn’t drastically change the original game, but it adds a little wrinkle to the game. Instead of competing against the clock you are competing against other players. This impacts the game in a number of ways. First there is more than one piece of each type and quite a few pieces that you don’t even need for your side of the board. For this reason you and the rest of the players will be digging through the pile in the center looking for the pieces that you need. Some players may search for specific pieces while others may just grab large groups of pieces and search through them later. While the rules make it clear that you can take multiple pieces at the same time, we ended up house ruling this where players could only take one piece at a time. We mostly did this because players would otherwise hoard pieces which could prevent other players from getting one of the last pieces that they needed. Being able to place pieces quickly is still important in Challenge Perfection, but finding the right pieces also becomes an important part of the game.

The other major change to the game is just the fact that you are competing against other players. I personally was never a huge fan of the timer in the original game. I found the fact that the board could jump up suddenly to be kind of stressful. This was also kind of disappointing as you either placed all of the pieces in time or they all popped out. Outside of finishing in a faster time, there was nothing more to the game after you played it a couple times. Having other competitors to play against adds another element to the game. I found it to be considerably more satisfying beating another player to the trophy rather than finishing before a timer runs out.

Another problem with the original Perfection was the fact that there was only one board. Once you learn where all of the pieces go it basically becomes an exercise in memory and how fast you can place pieces. Thus the game’s only challenge is trying to place the pieces quicker. Challenge Perfection somewhat mitigates this by the fact that there are four different sides. Each side features different shapes in a different pattern so it will be much harder to memorize each board. This adds some replay value to the game as you won’t quickly memorize the layout of each board.

How the boards are set up though does introduce some issues for the game. The biggest problem is that there are a couple of pieces that are actually very similar to one another. In particular there are several squares/rectangles and triangles that are similar enough that it is hard to tell if they fit into a space or not. Some of these pieces you literally have to try to place into the space to determine whether it is the right shape or not. On one hand this makes the game quite a bit more challenging. It makes it much harder to find some of the shapes though as you can’t really tell whether a shape will fit until you try it.

As for the game’s difficulty and length it should not come as much of a surprise to anyone that has played the original Perfection. The game could be taught in maybe a minute or two as the rules basically boil down to find the pieces that fit the shapes on your side of the board. Those familiar with the original game will take even less time. Outside of the possible choking hazard I don’t really understand the recommended age as children younger will have no issues playing the game. As for the length it will somewhat depend on the number of rounds that you decide to play. I would say that each round should only take 1-3 minutes since if you have any skill at the game you can fill a side in pretty quickly.

The components for Challenge Perfection are basically what you would expect. The shapes are basically the same as every other version of Perfection. The pieces are made of somewhat thick plastic where they should last if taken care of. The gameboard is a pretty basic tray. The plastic is quite thin where it could crack/rip along the edges unless you are really careful with it.

Should You Buy Challenge Perfection?

I got to say that Challenge Perfection is basically what you would expect it to be. The game takes the original Perfection gameplay and makes it multiplayer. The players compete to see who can find and place their shapes first. Adding the competitive element is interesting as I thought it was more enjoyable playing against another player rather than a clock. You have to compete against other players for the pieces, and you actually have to search as not all of the pieces will fit on your side of the board. With each side having different shapes you also can’t remember them as quickly which adds some replay value to the game. At the end of the day though it doesn’t really differentiate itself much from the original game.