What Is Caveman Craig?:

Caveman Craig is a strategy/RTS game set in a prehistoric world full of dangerous dinosaurs and cavemen. You play the titular caveman (Craig) and must build up your clan in an attempt to conquer the five different tribes of Boggdrop. You must hire cavemen (which are broken into hunters, gatherers, and preparers), teach them how to do their jobs (by picking fruit, hunting dinosaurs, etc.), and eventually build up a large group of hunters to try to take over your opponent’s territory and eventually their entire base. 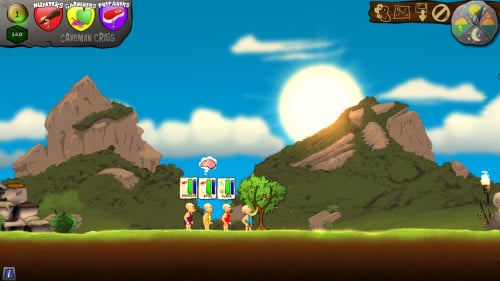 © Parabox Games Caveman Craig attempts to teach some cavemen the ways of gathering.

Each level of Caveman Craig starts you with three credits you can use to spend on cavemen. You will probably want to hire one of each specialty (a hunter, a gatherer, and a preparer) and teach each of them their two different skills. Hunters can throw rocks and use their club to kill dinosaurs (and eventually members of the other tribe), gatherers can pick fruit and drag dead dinosaur carcasses back to the cave, and preparers prepare the fruit and meat that the gatherers have brought back (so you can earn more credits to buy more cavemen). The more food you can gather, the more cavemen you can get. In addition, by doing things to help your tribe you earn XP that you can use on rewards like defensive structures (a watchtower, catapult, etc.), buffs that can help you in battle (including ones that allow your hunters to throw two or three stones instead of just one for a minute, an epidemic that drains the other tribe’s energy, and more), and even your own dinosaurs that can help you fight the opposing tribe. The goal of Caveman Craig is to build up enough resources so you can send plenty of hunters to take over the opposing tribe’s territory and eventually their cave. When you take their cave, you beat the level. 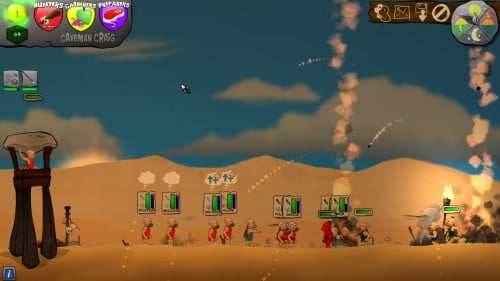 © Parabox Games This player has built up a pretty substantial army of hunters and is ready to engage the enemy tribe.

Caveman Craig only has five main levels (plus a tutorial level) but it does also come with five mini-game type levels as well. The mini-games include Meteor Dodge (you try to dodge as many meteors as possible), Survival (no enemy tribe but you need to survive a dinosaur onslaught as long as you can), Raptor’s Revenge (you play as a dinosaur, eat cavemen for energy, and try to last as long as you can), Rock Stompage (stop the cavemen from stomping all your fruit by smashing them with a huge rock), and Summit Showdown (basically a caveman duel using rocks instead of guns). In terms of multiplayer options, Caveman Craig only offers local co-op.

What I Liked About Caveman Craig:

First of all (and also most importantly), Caveman Craig is quite a bit of fun to play. It isn’t an amazing game that is an absolute must-play for everyone or anything like that, but it serves well as a nice casual game to play when you don’t want anything too serious or difficult. While it isn’t a perfect comparison, Caveman Craig resembles an RTS game, just in a much easier, lighter, and quicker form. I love RTS games (and just about any game that requires strategy) but sometimes I don’t like how complicated and time-consuming they can get. While a game of Civilization could take you days if not weeks to complete, you can easily finish a level of Caveman Craig in an hour.

While this game is easier and quicker to play than most games in the genre, it does still offer a lot of depth in terms of strategy and different rewards that you can purchase. While the easiest strategy is to just go heavy on gatherers and preparers at first (to get a lot of food coming in to get more caveman tokens), then overrun the other tribe with hunters once you have built up, there are opportunities for different play styles in Caveman Craig. You will usually win the level using that strategy but you could also play a much faster style (basically rushing your opponent with just a few hunters), an infrastructure heavy style (building defensive structures to protect your base and checkpoints), or even build a dinosaur army instead of hunters (you can hatch and breed dinosaurs to fight for you). Whether you are an aggressive player or a conservative, resource-accumulating player (like I am), there are opportunities to do whichever you are more comfortable with in Caveman Craig.

While it is unfortunate that the game only comes with five main levels, the bonus mini-games make up for it (somewhat). While these aren’t super polished (they look like they were probably programmed in a day or two each), they are actually somewhat fun to play. All five were pretty fun (at least for a few plays) but I especially liked Raptor’s Revenge and Summit Showdown. Raptor’s Revenge is pretty much a timing game where you have to time your raptor’s leaps at cavemen (in order to feed it and keep it’s energy up) and try to string together a nice combo without missing. Summit Showdown is very similar to a duel. You have to hold your mouse over your cavemen and after a three-second countdown aim your rock at your opponent and successfully hit him in the head before he hits you. All five mini-games are pretty simple but surprisingly addicting.

While Caveman Craig isn’t the best looking game every (it’s solid but not really spectacular), the presentation is still overall pretty solid. I especially liked the soundtrack by Ricky Garcia. It is very catchy, especially the main title theme. The voice acting (basically gibberish since cavemen obviously don’t know English) is actually kind of hilarious (as is some of the text in the game). The art is colorful and pretty well done. My only complaint is that the game wastes a bit too much space on the sky, making the cavemen and the dinosaurs look kind of small. The little dinosaurs are sometimes even hard to see (especially when they are by vegetation). However, the art is definitely good enough as long as you don’t mind cartoony graphics.

While Caveman Craig is fun to play and easy to learn, there are a few things about the game that annoyed me. One of the biggest problems is that it can be really difficult to juggle training your cavemen (and buying new ones), keeping your orchards going (I wish you could buy a “subscription” so they would keep growing after they’ve been picked clean at a cost of XP points), defending your territory, saving your cavemen from the large amount of dangerous dinosaurs, earning XP points, attacking the opposing tribe, etc. I really wish some of this would have been streamlined because it is really hard to keep up with everything. For example, while there are rewards that allow for faster learning by the cavemen, it still takes a bit too long in my opinion. Making the tedious task of training your cavemen a bit quicker would be nice.

When some of the dinosaurs attack your territory, it makes things even harder to keep up with. Some of the dinosaurs are extremely annoying to deal with. For example, there are some tiny yellow ones that force you to alternately push two buttons for 15 seconds or so in order to shake them off of you. There are also some that keep running you over and stunning you until you finally bring it down. While many of the dinosaurs are tough enough to deal with yourself, when they attack your cavemen it is even worse. You will lose a lot of cavemen to these dinosaurs and then have to train new ones to take their place (adding even more things to your to-do list). The game does warn you when your cavemen are being attacked but Caveman Craig moves way too slow (I really wish he moved faster) and your territory is pretty big (multiple different screens of length), so it can be hard to get back before the dinosaurs kill them. While in most cases the dinosaurs are a good addition (they add a bit more difficulty to the game which would otherwise be pretty easy), there are some things that annoy me about them. 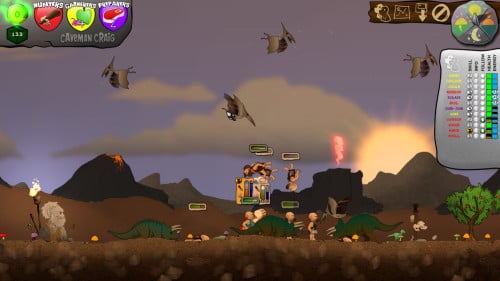 © Parabox Games Some of the many annoying dinosaurs in Caveman Craig.

Finally, while there is local co-op I really wish there was an actual multiplayer mode because this is the type of game that multiplayer really works well for. It would be so much more fun to face off against one of your friends instead of a computer player. The computer AI is just okay, they may take some of your territory from time to time but you can usually overrun them quite easily later in the game. Against another human being, Caveman Craig would become much more competitive and strategic.

In my opinion, bang for your buck is actually the biggest problem with Caveman Craig. The game is $10.99 for five levels (which at most should take you an hour each to finish), a tutorial level, and five mini-games. That’s pretty expensive for a relatively low amount of content. Completing the game 100% (unlocking all the achievements, cheats, etc.) probably adds another couple hours to the game but that’s still a pretty high price for a game like this. However, I could see myself going back and re-playing the game (or at least finishing off the rest of the achievements) so there is some re-playability to the game (it’s one of those fun pick up and play games for when you don’t want anything too serious or difficult to play). I guess $10.99 isn’t a terrible deal but I just wish there was either slightly more content or the price was a little cheaper.

Caveman Craig is a fun game with a relatively unique concept (kind of a simplified RTS game). I wish the game came with a little more content (especially a multiplayer mode) to justify the price but it isn’t a terrible deal. If you are into strategy games (especially simpler and more casual ones), Caveman Craig is a pretty good choice.