When I first saw Cat Tower in the thrift store I had a hard time not immediately noticing the game due to the cute cat on the box. Despite not being a cat lover, there was something about the game’s art style that really stood out to me. I am generally not a huge fan of stacking games but the artwork and the fact that the game was only around $1 sold me on picking up Cat Tower. While the artwork sold me immediately, I was a little more hesitant when it came to the gameplay as I have played a lot of stacking games and they rarely do anything highly original. Cat Tower’s cute artwork will appeal to a lot of people but its unoriginal gameplay and somewhat lackluster components prevents the game from reaching its potential.

How to Play Cat Tower 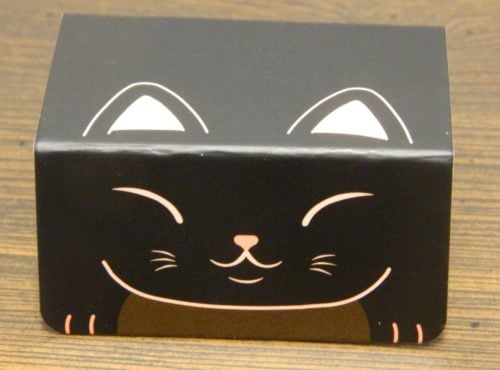 A player begins their turn by rolling the die. The symbol they roll on the die will determine the action they will take on their turn. Most of the actions will involve the player adding a cat(s) to the tower. When adding a cat you place it going the opposite way as the previous cat. 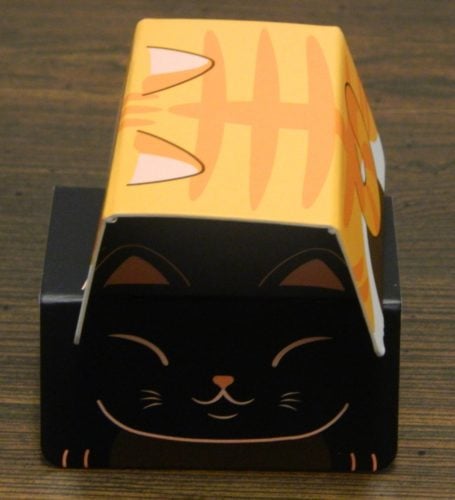 A player has added a cat to the tower.

After the player has performed their action, the next player takes their turn (to begin the game turn order proceeds clockwise). 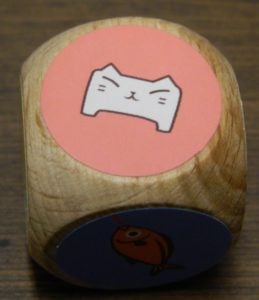 One Cat: The current player will add one of their cat cards to the stack. 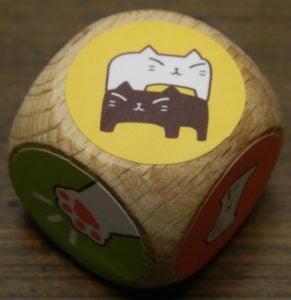 Two Cats: The current player will add two of their cat cards to the stack. 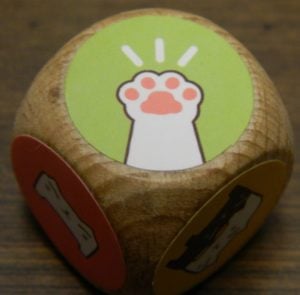 Cat Paws: Choose one of the other players. The chosen player will have to add one of your cards to the tower. If they tip over the tower, they will suffer the penalty. 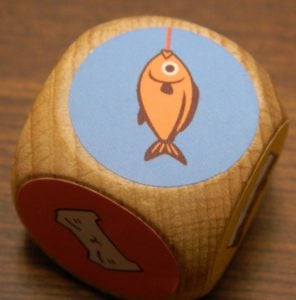 Dried Fish: You will add one of your cat cards to the tower. When you place the cat though you will add it by placing it on its back. 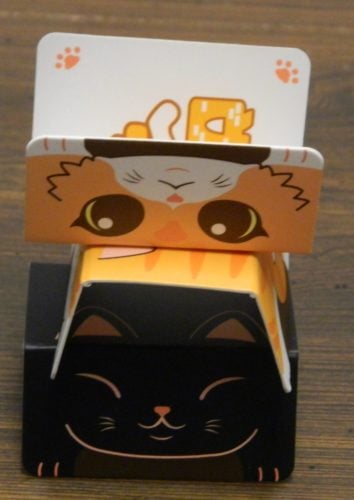 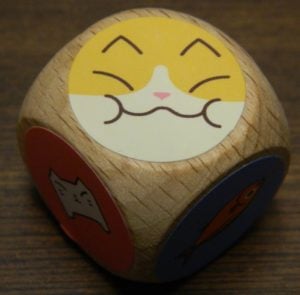 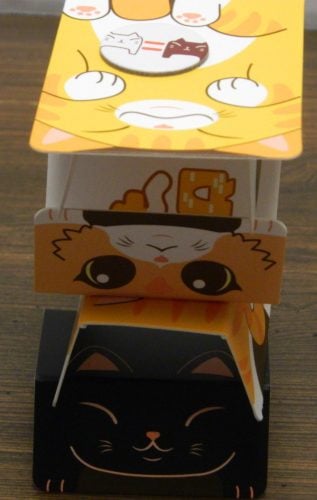 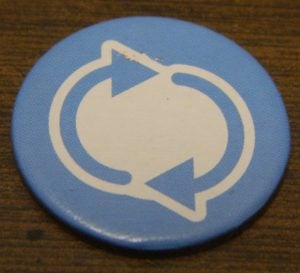 Turn Around: The turn order reverses to the opposite direction. 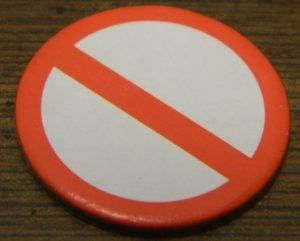 Skip: The next player loses their next turn. 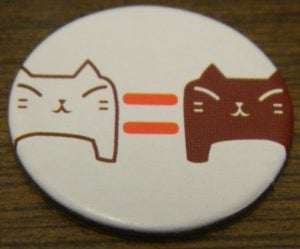 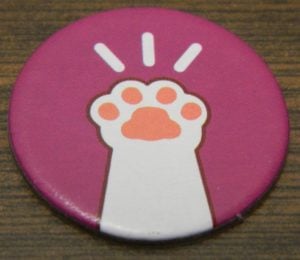 Cat Paws: Choose one of the other players to place one of your cat cards on the tower. If the tower is knocked over, the player who places the card will take the penalty. 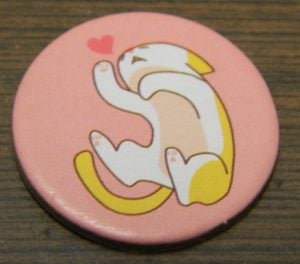 Cat Belly: The next player has to place their cat on the tower upside down.

The round ends when one player gets rid of their last cat card. All of the players who still have cat cards in their possession will score one penalty point for each cat card.

When the desired number of rounds have been played, the game ends. The player with the least penalty points wins the game.

My Thoughts on Cat Tower

Let’s get this out of the way right away. The driving force behind Cat Tower is the game’s theme/artwork. It is hard to ignore as it likely is the first thing you are going to notice when you first see the game. The box itself is a cute cat that stares right at you. While I wouldn’t say that I am a big fan of cats in general, I can’t deny that Cat Tower’s artwork is adorable. Unless you hate cats I think you will love the game’s artwork. This might not be saying much for the rest of the game but the artwork is probably Cat Tower’s greatest strength. No matter what you think of the gameplay, you will at least enjoy looking at the components while playing the game.

Now that we are past the cute artwork it is time to look at Cat Tower’s actual gameplay. This is where Cat Tower starts to falter. At its core Cat Tower is another generic stacking game. Players take turns adding their cats to the tower hoping to be the first player to get rid of all of their cats. While placing cats players need to be careful since if they topple over the tower they will have more cats that they will have to get rid of. Basically if you have ever played a stacking game before you will have a good idea of what to expect out of Cat Tower. Players with steady hands who are careful while placing their cards will have an advantage in the game.

As the game mostly involves rolling a die and then adding cats to the tower, Cat Tower is not surprisingly a very straightforward game. The game can be taught to new players within a minute or two. Most of the learning comes from knowing what all of the symbols stand for and since you can always refer to the instructions this is not a big deal. As the game is so straightforward it can be enjoyed by the whole family. The game has a recommended age of 6+ which seems about right. The only reason I would say it couldn’t be lower is that I don’t know if younger children would have steady enough hands in order to do well in the game. As Cat Tower is so simple I think it may work well with people who rarely play board games.

There are two main areas where Cat Tower differentiates itself from other stacking games. The most significant difference comes from the addition of the die. Basically the die is used to determine what action a player will take on their turn. I kind of liked that the die roll adds some variety to the game as players won’t always end up taking turns adding another item to the tower. Other than adding some variety though, the die mostly just adds luck to the game.

As some symbols are better to roll than others, the player who rolls the best symbols is going to have an advantage in the game. Being able to place two cats when the tower is short can be advantageous as it lets you get rid of cards quicker. As the tower grows in size though having to place two cats becomes much harder. Rolling the symbol that forces another player to play one of your cats is really good as you will get rid of one of your cards with no risk of facing a punishment. Placing one of your cats on its back is also beneficial to you as it is pretty easy to place a cat this way without knocking over the tower. This is even better because it is quite a bit harder for the next player to place a cat on top of a face down cat. Rolling the catty fatty symbol can be kind of hit or miss as it is pretty easy to place the card but what action you have to take due to the disc you chose can be either really good or really bad.

When I first started playing Cat Tower I thought the game was going to be really easy. It is usually pretty easy to place the first three or four cat cards in the stack. Things get quite a bit more difficult after this point though. I don’t know if it is because of the weight but the feet on the bottom cards start to slide outward which makes the whole tower more unstable. Generally the tower can only hold five to six cards before it will start to tip over. Basically the player whose turn comes up around the fifth or six card is going to have a hard time saving the tower. With how unstable the tower can be, it is unlikely that a player will be able to go through an entire game without ever tipping over the tower. As the tower falls over quite a bit, the winner is likely going to come down to who tips over the tower the least.

While I really liked the cards’ artwork, I think the unstable towers can be partially attributed to the cards themselves. The problem is that the cards feel cheaper than they probably should have been. The cards are of a decent thickness but at times they refuse to remain bent. The bends in the cards refuse to keep their shape as the cards start to return to their flat shape. For the cards to maintain their shape players will regularly have to re-crease the cards. This adds quite a bit of wear and tear to the creases which leads to tears and other wear quicker than you would like. While the used copy I picked up was in pretty good shape, I have to say that I am worried about how long the cards are going to last before they will have to be replaced.

While having steady hands is important, at the end of the day I think having luck on your side is just as important in Cat Tower. If you are terrible at dexterity games you are going to struggle in the game. If you are at least decent at dexterity games though, your fate is going to rely somewhat on whether luck is on your side. As I already mentioned rolling the right symbols at the right times can give you a pretty significant advantage in the game. Luck also comes into play with what the tower looks like at the beginning of your turn. Due to how unstable the tower can be at times, you can easily be put into a position where it is next to impossible to add another cat to the tower without tipping it over. A player could go from first to last just because they were dealt an almost impossible situation.

Should You Buy Cat Tower?

When you first look at Cat Tower it is hard not to immediately fall for the game’s cute art style. Despite not being much of a cat person I immediately fell in love with the cute cat cards included in the game. Unfortunately Cat Tower’s artwork is clearly its greatest strength. Cat Tower is kind of lacking in the gameplay department. Basically it is your typical stacking game with a few slight differences. Players roll a die to determine what they do on their turn which mostly just adds luck to the game. The gameplay is really simple so it may appeal to children and people who don’t play a lot of board games. People that want a more difficult stacking game may appreciate that the towers can become unstable pretty quickly. The unstable towers mostly come from the cards feeling kind of cheap though. The cards refuse to stay bent which usually makes the tower fall after five or six cards have been added. This forces players to keep creasing the cards which wears them out pretty quickly.

Cat Tower is overall a decent game but it doesn’t really do anything original. Having played so many different stacking games, I wouldn’t consider Cat Tower to be one of the best that I have played. If you don’t love cats and don’t care for stacking games, Cat Tower is not going to be for you. If you love the cute cat theme though and like stacking games I can see you having some fun with the game. With how quickly the cards wear out though I would probably only pick it up if you can get a good deal.

If you would like to purchase Cat Tower you can find it online: Amazon