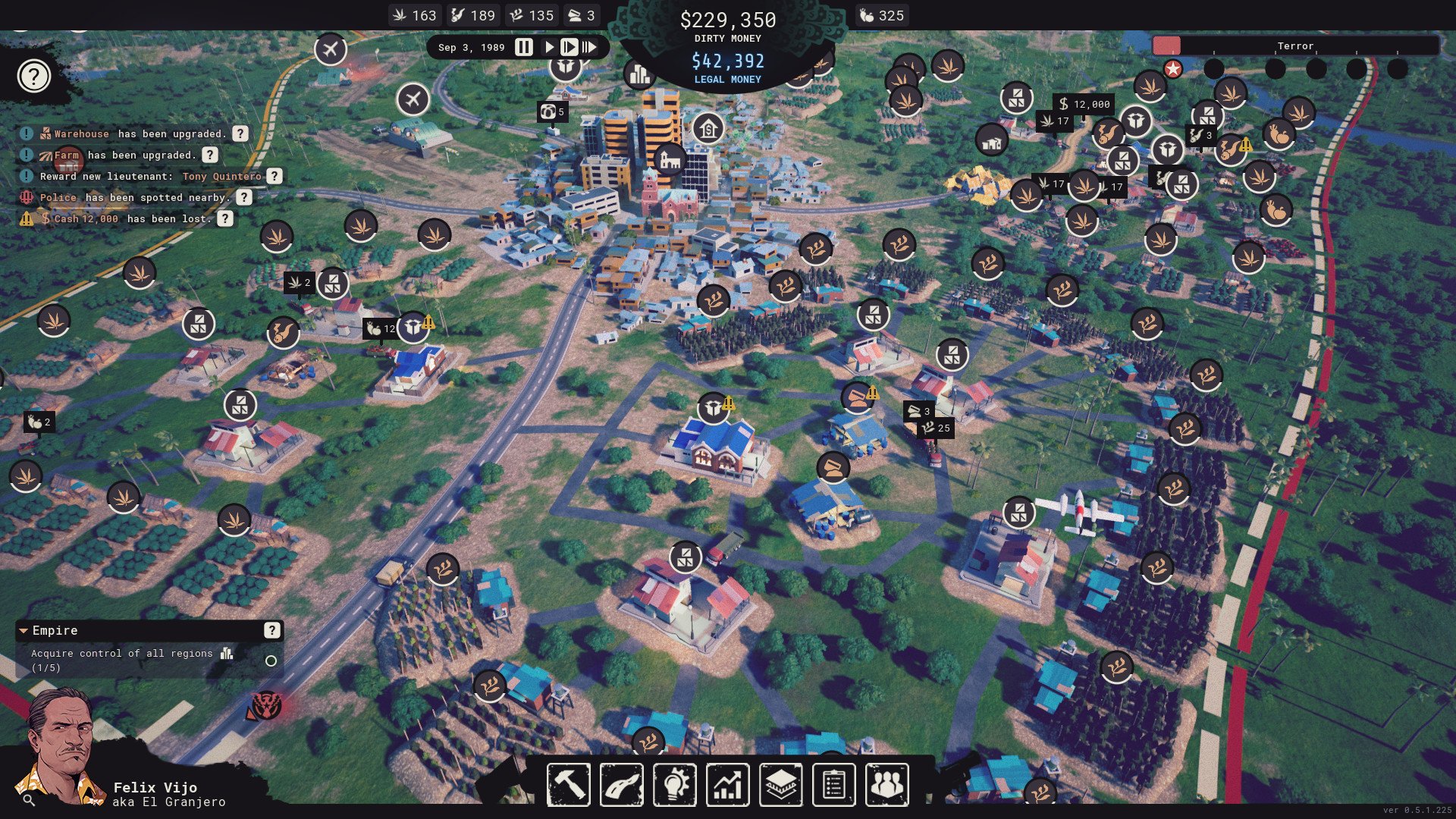 Recently I have taken a look at quite a few different tycoon games. I have always loved this genre of video games as it is one of my favorites. There is just something satisfying about creating and running a successful business. Today I am taking a look at Cartel Tycoon which released today in Early Access. Normally the idea of running a drug cartel wouldn’t be something that would really intrigue me as the theme isn’t all that interesting to me. I decided to check Cartel Tycoon out though as it looked like an interesting twist on the typical tycoon game. Cartel Tycoon has a sort of learning curve and some issues typical of an Early Access game, but it already has a strong framework in place to make a great tycoon game.

In Cartel Tycoon you play as the leader of a new drug cartel in Latin America during the 1980s and 1990s. You begin with a small influx of cash and need to try and build your empire. In the game you can grow a number of different drugs to sell on the black market. While your first drug just requires you to grow it and drop it off at a transportation hub, other drugs require a series of steps to get them to a sell-able form. This includes hiding drugs in other shipments to keep them hidden from the authorities. Most of the gameplay is built around creating the buildings and the logistical connections to successfully get everything where it needs to go.

To begin the game you will choose the leader of your cartel. As your operations expand you will hire additional lieutenants which help you run your empire. These lieutenants can be given various tasks such as transporting goods/money, helping speed up the production of goods, or providing other services. These can include attacking rival cartels to take their territory, and other illegal acts. Each illegal act that you perform though will alert the authorities. Make too much noise and the authorities will start investigating your various facilities, destroying your properties, stealing your money/goods, and shutting down your operations. If things get too bad they could even target your leader and try to kill them. Whenever your leader is killed you can choose one of your lieutenants to take over and continue running your cartel.

For the most part Cartel Tycoon plays how you would expect it to. The game is basically your typical tycoon game where you just so happen to run a drug cartel. The main gameplay consists of growing crops used in your drug operations, refining and preparing them for shipment, and eventually transporting them to a transportation hub to sell them. Along the way you will also have to deal with rival cartels and the authorities that are intent on stopping you. I would say that a lot of the game plays like a logistics simulator. Much of the gameplay is built around figuring out where to build buildings, what products to make, and how to move goods between buildings.

I generally liked the tycoon aspects of Cartel Tycoon. The game doesn’t play drastically different than a lot of games from this genre, but it has its own little tweaks that keep things fresh. I wasn’t particularly interested in the drug cartel aspect of the game, but the gameplay is still quite fun. Setting up your operations is quite satisfying as you turn basic raw materials into the final goods which sell for considerably more money. The gameplay takes more of an overview approach to your operations as you mostly just place the buildings and choose how you will move goods between them. If you generally enjoy these type of games and don’t mind the game’s cartel theme, I see no reason why you wouldn’t enjoy playing Cartel Tycoon.

One thing that I found to be kind of interesting about Cartel Tycoon is that you aren’t running a legit business. Therefore you need to be careful in what you choose to do as it will attract the authorities to try and stop you. This also comes with the fact that most of your money is dirty where it can be traced back to your illegal operations. To address this the game actually has two different types of money. There is the dirty money that you receive for all of the drugs that you sell. This money can be used to pay the operational costs of your buildings and lieutenants if you transport the money to the buildings that need it. In some ways the process of transporting money between your buildings is more important than goods. If your buildings don’t have enough money to pay their costs, they will shut down which will impact your entire operation.

Like real drug dealers the game implements a money laundering mechanic as well. In each of the towns that you control you have the opportunity to add buildings that will allow you to turn your dirty money into “clean” money. This clean money is valuable. First for some expenses you can only use clean money. Additionally this money can be used without having it at the corresponding building which makes paying expenses really easy. Turning your money from dirty to clean takes some time though, so you need to be wise in how you choose to use your clean money.

I honestly think the emphasis on money was something that makes Cartel Tycoon unique. Maybe there are other tycoon games with a money laundering mechanic, but I have never played one before. You might think this is just a gimmick at first, but it isn’t. How you handle your money in the game is crucial to your success. If you have troubles getting dirty money to the required buildings or running out of clean money, your whole operation can shut down. In particular I had some troubles where I would have limited cash on hand which would severely limit how much of my operation that I could actually use at a given time. This does lead to some frustration at times as you could get stuck in a money pit that is really hard to drag yourself out of. You might want to just use clean money as it is much easier to deal with, but it takes too long to clean where you need to set up a logistical network to use dirty money to pay some of your expenses. I thought this was a really interesting addition to the game.

Initially I had some troubles with growing my cartel so I wanted to offer some quick advice. Generally I like to expand quickly, but this isn’t really an option in Cartel Tycoon. If you grow quickly you will have big money problems in the game as your operations will burn through money much quicker than you can sell your products. Instead you need to grow your operations slowly. You need to build a good foundation and slowly grow from there to expand. Money is key in the game as you can run out of it quickly if your operation is too large for your current sales. When you get stuck in a hole, it is hard to dig yourself out.

This actually illustrates one of the biggest issues that I have with Cartel Tycoon at this point. The game has a decent learning curve right now. The game itself is not all that difficult to play, but it will take some time to figure out what you should do. I will give the game some credit as the story mode actually does a pretty good job using its various missions to teach you the mechanics. You likely will make some early mistakes though which will compound making it hard to keep your business running. You eventually learn what you did wrong though, and will hopefully make adjustments for the next time you play the game. Once you figure out what you are supposed to do, the game is quite easy to play. You likely will hit some walls until you reach that point though.

One thing that I quickly wanted to talk about was the game’s theme. Honestly just the fact that it was a tycoon game intrigued me more than the drug aspect of the game. I honestly can’t say that I ever really wanted to play a video game where you run a drug cartel. This theme is likely to turn off some people. While the game is fictional, it is based off of real events in Latin America in the 1980s and 1990s. The game doesn’t have an age rating, but it is for mature audiences mostly due to the fact that you are making and selling drugs. Otherwise the game features adult language. There is a lot of violence in the game, but it all happens offscreen. Basically a lot of people get murdered, but all you see is still images moving around a map.

As for Cartel Tycoon’s current state in Early Access, I would say that it is in pretty good shape at this point. The game is expected to stay in Early Access until fall of this year so it will have a decent amount of development before the final version is released. At this point the main gameplay is already in place and it works pretty well. You will occasionally run into a few buildings, crops, and other features that will be added in at a future date. The gameplay is pretty polished at this point though. I kind of hope the game spends a little time giving you more control over logistics especially with transporting cash as the game doesn’t always do what I wanted it to do. At this point the game has two modes: story and sandbox. The two modes are very similar. The main difference is that the story mode gives you various missions to complete and has an overarching story. The sandbox mode basically just gives you money, and lets you try to build as successful of cartel as possible.

Cartel Tycoon has some issues typical of a game that just entered Early Access, but I think the game is already on the right track to be a good to great game in the tycoon genre. There are buildings/features missing here or there, but the main gameplay is already in place. It doesn’t feel like only a small part of the game is currently available. Instead it feels like the framework is in place and additional pieces will be added in at later dates. A lot of the mechanics are similar to your typical tycoon game, but they work well and are enjoyable. Anyone who likes tycoon games and doesn’t mind the drug cartel theme, should enjoy their time with the game. The one thing that I found somewhat unique about the game was the distinction between dirty and clean money. Transporting money where it needs to go as well as cleaning it are big parts of the game. I would say that there is a learning curve as you likely will make some early mistakes that will come back to haunt you later. As you play the game though you start to figure out what you are supposed to do in order to do better in your next attempt.

If you don’t really care about the tycoon genre or the drug cartel theme turns you off, Cartel Tycoon probably won’t be for you. Fans of the genre that at least don’t mind the theme will likely enjoy Cartel Tycoon and should consider picking it up.