Board Games » Reviews » Dice » Cards vs. Dice Board Game Review and Rules 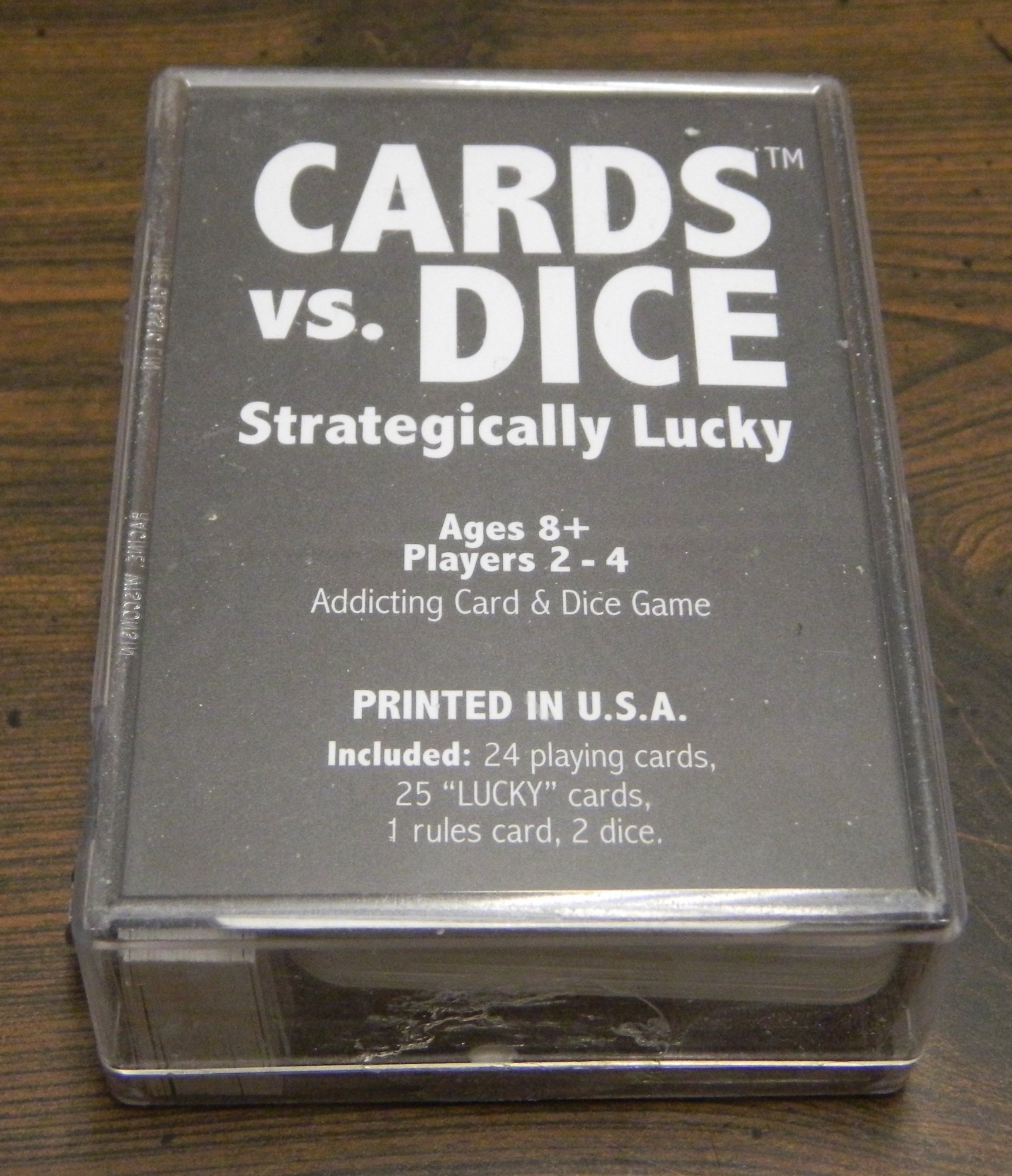 Two staples of board games for many years have been cards and dice. So when a game promised to pit cards vs. dice, I was intrigued by what the game would be like. It also didn’t hurt that I found the game for $0.25 at a thrift store. So does the game live up to the epic battle between cards and dice promised in the title? While the game has some interesting mechanics, the game fails to be anything more than another average dice rolling game.

Shuffle and deal out the cards so each player is dealt the same number of cards.

A player begins their turn by rolling the dice. The number rolled determines which cards that a player can get rid of. There are two different ways that players can play cards.

There are two different ways to win Cards vs. Dice.

Cards vs. Dice is pretty much your basic filler game. The game is really easy to learn and is quick to play. All of the game’s rules fit on single card and can be explained in a couple minutes. Individual games take just minutes to play. I think this is both a positive and negative. The game works well as a short game but I think the game could have benefited from having more cards. I would say that Cards vs. Dice is very similar to games like Uno where they are so simple that you don’t really have to put a lot of thought into playing them. Cards vs. Dice definitely won’t tax your mind but it can provide some fun if you don’t want to put a lot of thought into it.

The mechanic that I found the most interesting in the game was the ability to win in two different ways. What is interesting about Cards vs. Dice is that bad rolls can actually help you by giving you a lot of cards. Basically in Cards vs. Dice you either want few or a lot of cards. Being stuck in the middle is the worst place to be since you are going to have trouble winning either way. Having few cards means that you can get rid of all of your cards. Having a lot of cards makes it really easy to match the numbers you rolled which means that you get to draw lucky cards. I think the only realistic way to win the game with lucky cards is through drawing a bunch of cards.

I thought the idea of the “lucky” cards was a good idea since they allow players to always stay in the game. Before playing the game I actually thought that the easiest way to win the game was going to be getting seven lucky cards. I thought it would be hard to roll the exact number you needed to get rid of your final cards. Also whenever you had to draw a lot of cards it would become really easy to roll combinations that would get you a lucky card. After playing four games of Cards vs. Dice I will admit that I was wrong and that it is actually considerably easier to win by just getting rid of all of your cards. 75% of the games we played ended with a player getting rid of all of their cards. I think this happened for two reasons.

First when you are getting rid of your cards you are going to try and keep cards that total between six and eight. Since six, seven and eight are the three most likely numbers to roll on a pair of dice, by keeping cards that add up to these numbers it is actually pretty easy to get rid of all of your cards. As a matter of fact you have over a 40% chance of rolling a six, seven or eight on any given roll. Utilizing this strategy it is much easier to get rid of all of your cards before a player can exactly match seven different dice rolls.

The other reason why you will win most games by getting rid of all of your cards is due to how cards from the discard pile generally get distributed. Usually one player ends up drawing a huge stack of cards leaving no cards for other players to draw. This means that players end up drawing no cards even when they roll a total where they can’t get rid of cards. These players will remain at a low number of cards which makes it pretty easy to get rid of all of their cards.

As far as the components I have to say that the game is kind of lacking. To put it bluntly, Cards vs. Dice is one of those games where you could easily make your own copy. All the game has is two six sided dice, 24 cards with four cards of every number 1-6, and the lucky tokens which you could replace with any type of marker to indicate how many times you matched your roll. Basically with how easy it would be to make your own copy of the game, I don’t see a reason to spend much on Cards vs. Dice if you were interested in picking up the game.

Cards vs. Dice is a decent dice rolling game but it is nothing special either. I like how the game keeps all of the players in the game until the very end and I liked some of the strategy on which cards you choose to get rid of. The game still relies heavily on luck though. How well you roll is usually going to determine who wins.

If you don’t like dice or luck games Cards vs. Dice won’t be for you. If you really like dice games you will probably have fun with Cards vs. Dice since it is a really quick filler game. With how little comes with the game and the fact that it would be so easy to make your own copy, I would wait to pick up Cards vs. Dice until you can find it for really cheap though.

If you would like to purchase Cards vs. Dice you can find it on Amazon