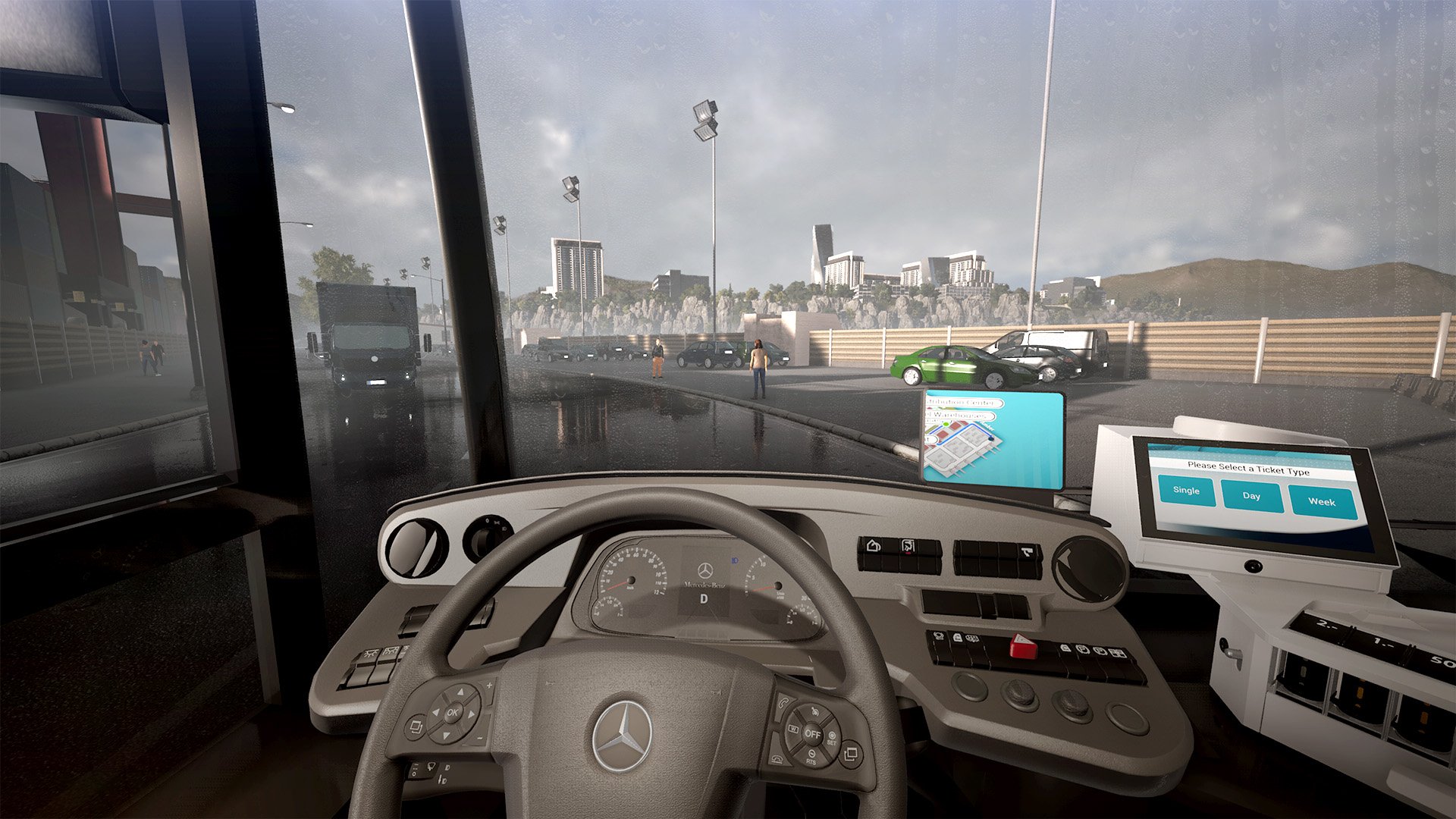 One of my favorite guilty pleasure games is Euro Truck Simulator 2. While that game and its spinoff American Truck Simulator are actually really well-made and have received a lot of critical acclaim, the guilty pleasure part comes from the fact that I have no idea why I love doing chores and other monotonous activities as long as they are in video game form. Both are great choices for stress-reducer games and I will often play them when I need to relax. Add in other “chore” games I’ve enjoyed like Cook, Serve, Delicious! and Viscera Cleanup Detail and it appears that I really enjoy doing monotonous work, but only if it takes place in a video game world. With that in mind, I just had to check out Bus Simulator when I was given the opportunity to review it upon its first ever PS4 release. While Bus Simulator is far from as polished or fun as Euro or American Truck Simulator (which unfortunately are both PC only), its solid enough. The biggest problems lie in its limited map that don’t make it quite as fun to explore as its Truck Simulator brethren.

In Bus Simulator, you wear the tandem job title of bus driver and company manager. You start off in an area that has gone years without bus service. Luckily, your company (I couldn’t resist calling my one Busy McBusface) has come to town looking to build the infrastructure back up. You will drive routes to prove to the city that your company should be entrusted with rebuilding the public transportation system (or at least the bus portion of it). After awhile, you will be able to buy more buses and drivers to drive them but you will still need to drive some routes yourself. There’s objectives to complete but like the Truck Simulator series, the main point is to just chill out and drive some routes (though traffic, potholes, and illegally parked vehicles will bring your blood pressure levels back up from time to time).

I must admit that my experience with Bus Simulator couldn’t have started off any worse, due to a bug that I’m not surprised was missed and was mostly my own fault. As the Steam version is co-op (though I would later learn online co-op only), I started a game and after trying to get a second driver in I wound up leaving the game to see if I missed an option for co-op or if it just wasn’t included in the PS4 build. I eventually realized there wasn’t co-op in this version (or at least not a local co-op mode) and on top of that, when I went back to my game it skipped the majority of the tutorial without me realizing it. I drove around having no idea what I was doing. Eventually after thirty minutes or so passed, I realized that I must have missed the tutorial somehow and started a new game where it worked. So, don’t quit your game in the middle of the tutorial as it will skip past several portions of it otherwise. Again, I’m not surprised that this bug was missed as not many people will immediately go back to the menu after starting a game.

After that debacle was sorted out, I did enjoy my time with Bus Simulator. It is a stress-reliever that doesn’t take too much thought to play while still giving you enough satisfaction for a job well done. The biggest problem with it is how many times you need to drive the same routes to progress and the limited world you have to drive in. I’m sure some won’t mind the repetition (as it helps with the zoning out part of the game) but I’m not really a fan of doing the exact same thing over and over. I don’t mind driving routes but I want to see at least some different areas every time I drive somewhere. There’s a sense of exploration in a game like American Truck Simulator, not so much in Bus Simulator (though obviously thematically it wouldn’t really make sense to drive different routes each time). While you can utilize free roam, it just isn’t as fun as in the Truck Simulator games.

In terms of the simulation aspect, in some ways Bus Simulator is more realistic than its competitors but in most ways, it is less so. This may or may not be a good thing depending on what type of gamer you are. For the things that aren’t as realistic, the main thing is that there aren’t very many penalties for driving poorly unless you hit something (in which case you’ll lose a significant portion of your income for the day). There are speeding tickets but they are only $200 and that’s about the only thing you can be ticketed for (or at least it was the only thing I got penalized for despite breaking many traffic laws throughout my hours of play). For hardcore sim fans, this hurts the realism a bit but for more casual drivers and those who just want to zone out and drive, it’s probably a blessing in disguise. There are also some things that will “ding” you experience wise (like hitting potholes) but these aren’t a very big deal and don’t really hurt you much at all. Oddly though, the game also gets a bit too heavy into simulation at times. For example, you will often have to pick up after passengers who litter and you’ll also have to dole out change to some people buying tickets at the bus stop. There’s also fare jumpers who will force you to check your passengers’ tickets, though this is so time-consuming and annoying that I usually just let them get away with it (as you’ll usually just waste your time checking tickets).

I was a bit worried that it would be tough to drive the buses in this game. While I enjoy Euro Truck Simulator 2, it definitely takes awhile to get used to controlling your truck (especially when you need to maneuver your truck into position for pickups and deliveries, which I still haven’t mastered). In Bus Simulator, after the debacle with the tutorial was over I had no real issues in this area. The buses control much better and easier than I thought they would and if you are at least decent at driving games, you’ll likely get a hang of it very quickly. While the easy driving experience was more than enough for me, for those looking for a more realistic simulation there are also additional settings you can change to make the game a bit more challenging.

Ultimately, Bus Simulator is a solid game though one that needs a bit more content and polish to warrant a $39.99 price tag in my opinion (I think it should be in the $19.99-24.99 price range). Both Truck Simulator games are less than that and they have way more content (though unfortunately neither are available to console gamers). If you already own Bus Simulator 18 on Steam you don’t really need to purchase this as it appears to be more or less a straight port of that game (it even says Bus Simulator 18 on one of the loading screens). Only those who are really into these job simulator games (especially those who love driving simulator games and want something different than the Truck Simulator series) and/or console-only gamers should consider it at full price. On sale it could absolutely be worth the price if you like driving simulators. Just don’t expect to get hundreds of hours of gameplay out of it like American Truck Simulator and be prepared to drive the same routes over and over again.