The objective of the game is to protect your own king piece while trying to reveal your opponents’ king piece. 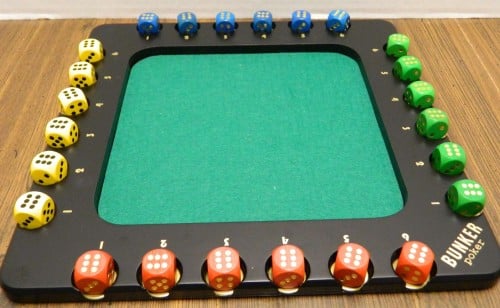 Here is a picture of the final setup of Bunker Poker for a four player game.

All of the players roll the larger rolling dice to see who gets to go first.

To begin a turn the current player rolls the two black dice. The combination of the two dice will determine what the player can do on their turn. On a players turn they can choose to use the dice they rolled in one of the following ways: 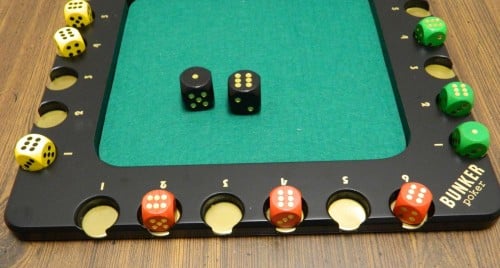 After a player rolls the dice and before they make their decision, all of the players can choose to switch positions of the two dice corresponding to the numbers rolled by the other player. For example if a one and a four are rolled, the other players (not the player that rolled) are allowed to switch their dice on the one and four spaces.

The game ends when all but one of the players’ king pieces are revealed. The player whose king piece was not revealed ends up winning the game. 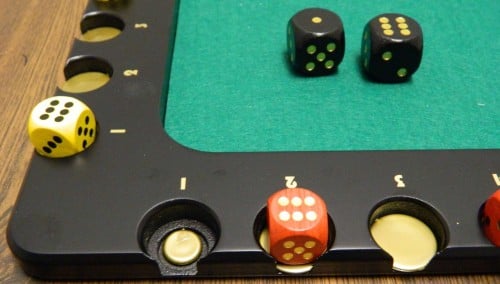 The green player has chosen to use the one and six dice in order to remove the red player’s one chip. It turns out that the red player hid their king piece in the one space so the red player is eliminated from the game.

We at Geeky Hobbies have looked at quite a few dice games. In general I wouldn’t consider myself to be a big fan of the genre. My problem with most dice games is that they generally rely too heavily on luck. They usually have no strategy outside of a press your luck mechanic. I typically like games that have at least a little strategy so I can at least feel like my actions actually have an impact on the outcome of the game.

Today we are going to look at Bunker Poker. Bunker Poker kind of intrigued me since it appeared to have more strategy than the typical dice rolling game. It looked like players were going to able to make some decisions that would actually impact the game. While Bunker Poker does have more strategy to it than the typical dice rolling game, the game is still nothing more than an average game. If you want something more exhilarating than this game, then check out all the exciting online gambling games here: https://www.sbobet-thai.com/.

Quick and Easy to Play

Bunker Poker benefits quite a bit from its’ easy to understand rulebook and its’ quick pick up and play style. The English rules are only two pages long with one of the pages being filled with diagrams so it is really only one page. It should only take a couple of minutes at max to read. The rules are also really easy to explain to new players. It might take a couple rounds for each player to get a grasp on what they can do each turn but it becomes simple once everyone understands the different options on each turn.

While each player has some options on every turn, the number of options never become overwhelming. Typically players will have three to five choices on their turn with a max of five to ten choices. This can usually be trimmed pretty quickly to the two or three best choices for any given situation.

A typical game of Bunker Poker lasts around 20 minutes. I like that the game is pretty quick since it gets to the point and doesn’t waste too much time. I think the game would have been better at around 15 minutes but I don’t really have a problem with the length of Bunker Poker.

Interesting Mechanics But Luck Has the Final Say

The things that interested me most about Bunker Poker were the mechanics that were added to a traditional dice rolling game. I liked that the game gives players multiple options/choices on their turn. In most dice games the only decision you might be able to make would be to decide whether you wanted to press your luck. There really is no room for forming a strategy with so little impact on the game. In Bunker Poker you can actually somewhat form a strategy. I wouldn’t confuse Bunker Poker with a strategic game but at least you can have some impact on what happens in the game.

The one thing I liked most about the mechanics is that you need to roll well but you also need to use your dice well. There are optimal ways to use your dice and this gives an advantage to players that are willing to put some work into thinking through all of their options. Usually your decision is pretty obvious but sometimes there are a couple equally valid options to choose from.

While these new mechanics had potential, they unfortunately don’t work as well as they could have. Like most dice rolling games, Bunker Poker relies too much on luck. While you do have some say in how the game plays out, luck will be the determining factor in whoever ends up winning the game. No matter how good your strategy is, you can’t implement it if you don’t roll the right numbers. If you roll poorly you will lose.

Unlike some games where any dice combination helps you, you generally want to roll high numbers in Bunker Poker. How the game is set up you always want at least one of your dice to be a high number. Having a high number is beneficial since it either adds more points to your dice or takes more points away from your opponent.

Although Bunker Poker has very little strategy, the one area where strategy does come into play is when trying to maximize your dice equity. Unless someone tips their hand, all decisions in the game of Bunker Poker are random guesses since you should have no idea where the other players played their king pieces. Since you are just guessing you might as well try to maximize each of your dice rolls the best you can.

When talking about dice equity, you need to try and avoid wasting points on the dice you rolled. For example if you roll a six and a one, you are better off taking six from a player’s one die than taking one from a player’s six die. Taking only one point off an opponent’s dice is not really doing any damage and by taking off six points you can eliminate a die from one of your opponents.

Rolling a six in Bunker Poker is huge. Each six allows a player to eliminate an opponents’ die from the game (as long as the other number matches a location of a die). Unless you have a good idea that an opponent is hiding their king piece in the six spot, I would recommend using any six rolled in order to eliminate another player’s die. Since players can not bring dice back into the game, each die that is removed from the game gives the player less flexibility which will make it easier to eliminate their chips on future turns.

One problem I had with Bunker Poker is that the game allows/encourages the players to all gang up on another player. This is not particularly surprising since games that focus mostly on attacking other players usually have this problem. While you can use your roll in order to increase one of your own dice, for the most part you will spend your time attacking other players. There is no protection for a player that is ganged up on. If multiple players decide to gang up on one player, that player will be in deep trouble and won’t win no matter how lucky they are in the game.

The thing about ganging up in Bunker Poker is that in most cases it won’t even be deliberate. Since your dice rolls will determine what actions you can take on a turn, a scenario will occur where players can only take actions against one player. If this keeps happening to one player they will lose pretty quickly. This actually happened to me in a game. No one purposely tried ganging up on me but the numbers rolled pretty much necessitated it.

Bunker Poker is a pretty average game. It does add some newish ideas, but it is just not that different from most dice rolling games. The game relies too much on luck and with the possibility for players to purposely or accidentally gang up on another player the game does leave you expecting more. If you don’t like dice rolling games I can’t imagine you liking Bunker Poker.