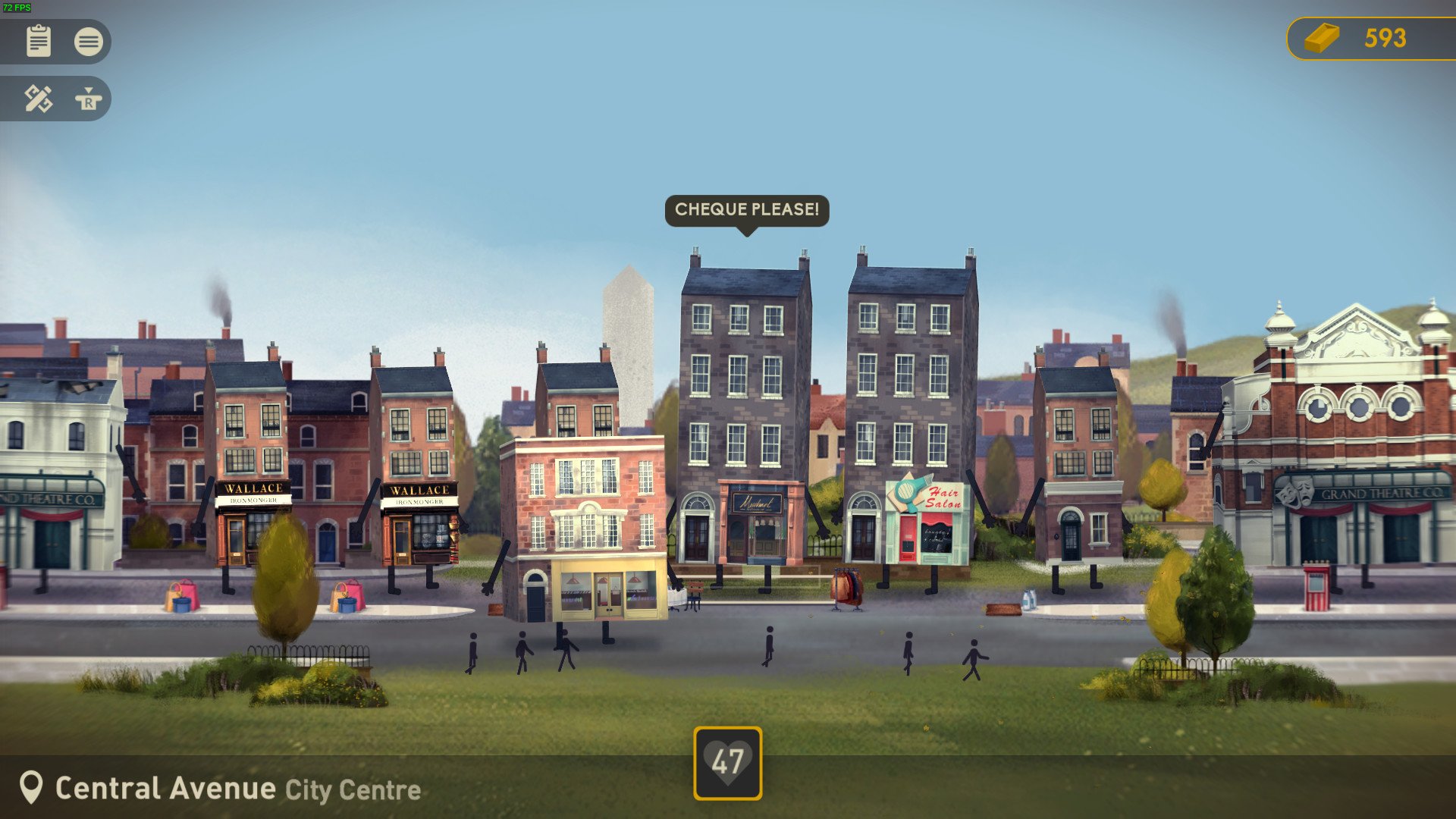 Buildings Have Feelings Too! is a game that has been in development for a while. It finally released last Thursday (April 22nd) and I was excited to try it out. As a fan of puzzle games and games that try something unique, I really wanted to see what the game had to offer. How could I not want to check out a puzzle game about sentient buildings where the puzzles were built around satisfying their needs. Buildings Have Feelings Too! starts a little slow, but if you can get past it there is a satisfying unique puzzle game to enjoy.

I would classify Buildings Have Feelings Too! as more of a puzzle game than a city builder. You play as a sentient building in a world filled with sentient buildings. After seeing one of your building friends get demolished after outliving its usefulness, you have decided that you won’t allow that to happen to another building. Thus you begin moving from neighborhood to neighborhood helping out buildings to prevent them from meeting a similar fate. The game is broken up into a number of different neighborhoods. Each neighborhood has its own story arc which involves you transforming the neighborhood into something new that will make it more successful. This involves completing a number of different tasks mostly involving building certain businesses/residences/etc, and increasing the overall rating of the neighborhood.

This is accomplished by installing the buildings with new functions and placing buildings near them which will help them be successful. In the game you will control a building that will move left and right through the neighborhood. You can interact with all of the buildings in the neighborhood. You can tell the buildings to follow you allowing you to move them to a new location. The main element of the gameplay is choosing what business to place in each building. Each building type can only hold certain types of businesses. All of the businesses in the game have certain needs and dislikes. In order to increase a building’s happiness you need to supply them with what they want while avoiding their negatives. If you can give a business everything it needs, you can upgrade it to a higher level.

I have played a lot of video games, many puzzle games in particular, and I will say that I really haven’t played a game quite like Buildings Have Feelings Too! before. On the surface the game looks like a city builder and in a way it is. You are trying to create a neighborhood where the buildings help one another. I would say that it feels much more like a puzzle game though. The gameplay is built around finding the right placement of businesses where they compliment each other enough that they can be upgraded to higher levels. This involves a lot of planning as you figure out what buildings you need to place together. The positioning of the buildings can also be critical at times. This also involves regularly repurposing buildings to give them different businesses to accomplish different tasks.

Being such a fan of unique ideas I was really interested in checking out Buildings Have Feelings Too! as it seemed like a game right up my alley. I have to say that I honestly was a little disappointed when I first started playing the game. This was mostly due to two things.

First I would say that the game’s controls could have been better. I played the game on PlayStation 4 so I ended up playing the game with a controller. The controls themselves are pretty straightforward which I appreciated. The main problem that I had was that there were some annoying little issues with the controls from time to time. It was sometimes a little hard to precisely place a building where I wanted it. When you misplace a building you need to get it to follow you again just to make it move one or two spaces to the right or left. The bigger problem was the fact that is can sometimes be tedious to rearrange the buildings. As you progress in a neighborhood you will usually have a bunch of different buildings. Some of these buildings are needed for your current objective, and others were used to complete previous objectives. The problem arises when you have to move a bunch of buildings just to insert one building into a specific area. At times you are able to just slide in the building and the neighboring buildings just slide to the side. Other times you have to manually move all of the buildings. Once I had to move around ten buildings just to place one where I needed it.

The biggest problem that I initially had with Buildings Have Feelings Too! though had to do with the game’s learning curve. Looking back at the game it actually is not that difficult of game. The problem is that I think the game could have done a much better job explaining how you are supposed to play it. The game has a tutorial which gives you the basics. You end up having to learn quite a bit of the game on your own though. I think it could have done a better job explaining what you are supposed to do earlier on in the game. The game has a steeper learning curve than it needed to have. As you play the game you start to figure it out, but I ended up wasting a decent amount of time learning what I was supposed to do. My main tip would be to just focus on what the main objective currently is. Also don’t be afraid to use a certain business to upgrade another, and then immediately turn it into a different business to help with another objective.

Because of these two issues I was initially going to give Buildings Have Feelings Too! a pretty average rating. I decided to play the game a little longer though as I could tell that there was a good game beneath the surface. I am glad that I did as the game really started to turn the corner and improve greatly after I figured out some mechanics that the game didn’t do a great job of explaining. These issues still hurt the overall game, but if you can work past them there is a really good game here. In fact once I got over the initial learning curve I started to really enjoy the game for what it was.

It is hard to deny that Buildings Have Feelings Too! is a unique experience. I have played some puzzle games with somewhat similar mechanics, but I can’t recall playing a game quite like Buildings Have Feelings Too! before. The gameplay is likely not going to be for everyone. A lot of it is built around rearranging buildings in order to give certain businesses what they need to be upgraded. I found this to be quite enjoyable. Usually it is pretty straightforward what you need to do to improve a building, but other times it requires some pretty precise placement of buildings as some businesses are needed for one business but are a detriment to others. As you progress through the game you need to create more advanced businesses which have more needs and are easier to lose if you don’t meet their requirements. Basically if the game’s premise intrigues you, I think you will really enjoy the gameplay.

I think the other main reason that I enjoyed Buildings Have Feelings Too! was the game’s overall atmosphere. This was one of the things that initially intrigued me about the game, and it succeeds at living up to the expectations. The game’s visual style is fantastic. The world is mostly 2D, but it has a lot of character. As you advance in the game there are quite a few different types of buildings that you can construct. Each different business you place in a building alters its appearance as well. The visuals look really nice, and the game just has a lot of character. Nearby buildings regularly have conversations between themselves. The key buildings for each neighborhood also have their own unique personalities and backstories which feel human in a lot of ways. A game like Buildings Have Feelings Too! could have ignored the theming entirely, but I really appreciate the effort that went into this aspect of the game.

As for the game’s length it will somewhat depend on what type of player that you are. I honestly was a little surprised by the game’s length as it was longer than I expected. The game has a total of 9 neighborhoods. Each neighborhood has around five or so missions to complete. I would say that most of the neighborhoods will take around an hour or so to complete. Some may take a little while longer if you haven’t fully grasped the mechanics yet. I haven’t finished the game yet either so the last couple of neighborhoods might take a little longer as well. I would guess most players could get at least 8-10 hours out of the game. For a puzzle game that is quite good. At a retail price of $20 that is even better.

I had pretty high expectations heading into Buildings Have Feelings Too!. Initially I was a little disappointed by the game. This was partially due to the controls being a little finicky at times and not always working as well as I would have hoped. The biggest problem was that the game has a pretty big learning curve and it didn’t do a great job explaining what you are supposed to do. As I started to adjust to how the game should be played though, it really started to grow on me. The game is an interesting take on your typical puzzle game as you need to figure out the right combination and positioning of businesses in order to get them upgraded into more valuable businesses. This might not be for everyone, but I found the gameplay to be pretty satisfying. This is also helped by the game’s atmosphere which is great as the game has a lot of character.

If you aren’t that interested in the game’s premise or don’t want to deal with the control issues or learning curve, Buildings Have Feelings Too! probably won’t be for you. Those intrigued by the premise that are willing to look past the game’s faults though will find a compelling puzzle game that I really enjoyed playing. For those people I would recommend checking out Buildings Have Feelings Too!.

Buildings Have Feelings Too!