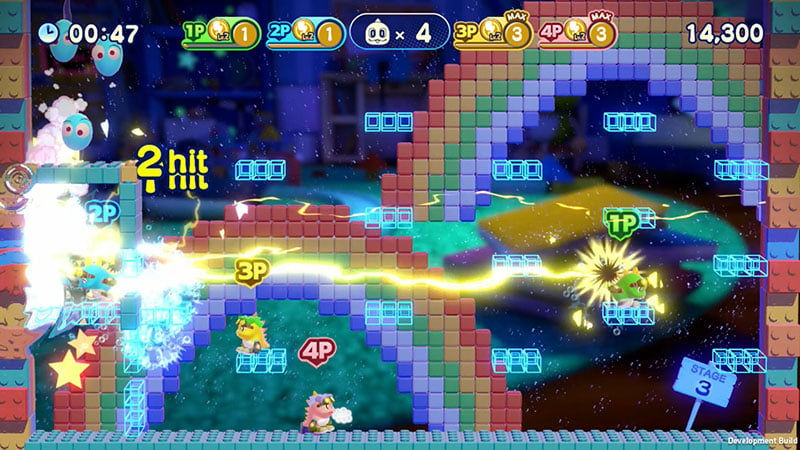 Bubble Bobble was originally released back in 1986 and the franchise has had a number of games released for it over the years. I have to admit that I don’t remember ever playing Bubble Bobble when I was a kid. After playing the game as an adult, I can see why the game has maintained its popularity even though the game is over 30 years old at this point. Released last year Bubble Bobble 4 Friends was the latest game in the series and was released on Nintendo Switch and PlayStation 4 exclusively in Japan. Today I am looking at a re-release of that game Bubble Bobble 4 Friends The Baron is Back! which is releasing today. In addition to adding 100 more levels to the game, this version finally brings the game to PlayStation 4 owners outside of Japan. Bubble Bobble 4 Friends The Baron is Back! doesn’t drastically change the franchise’s formula in any significant way, but it succeeds at maintaining the fun arcade action that the series is known for.

In Bubble Bobble 4 Friends The Baron is Back! you play as Bub, Bob, and their friends. The magician Bonner has unleashed his henchmen and you need to stop them. Just like the original arcade game your main tool in defeating them is the power of bubbles. Your main source of attack in the game is to shoot bubbles at your enemies in order to trap them. When one of your bubbles hits an enemy they will be trapped inside it. To get rid of them for good you either need to pop the bubbles they are trapped in with your head or slam down on them. The objective of each stage is to clear out all of the enemies so you can move onto the next stage. Collecting fruit and creating combos to defeat multiple enemies at the same time will increase your score. If you ever run into an enemy or one of their projectiles you will lose one of your lives. Complete all of the stages in a level and you will get to face off against the boss to unlock the next group of stages.

I have to say that Bubble Bobble 4 Friends The Baron is Back! is basically what I would expect from a game from this franchise. I am far from an expert, but the game plays a lot like the original arcade game. The main gameplay is exactly the same as it is built around the same bubble mechanics. The game has a few new additions, but none of them add anything that particularly changes the formula. For this reason anyone familiar with the franchise should already have a pretty good idea about whether they will enjoy the game.

While I wouldn’t consider myself the biggest fan of the franchise, I had fun playing Bubble Bobble 4 Friends The Baron is Back!. The main gameplay hasn’t drastically changed in 30+ years, but it honestly didn’t really need to as it is as fun now as it was back then. The game succeeds mostly for the same reasons that it worked back in its arcade days. The gameplay is really simple where pretty much everyone can quickly jump in and know exactly what they are supposed to do. Yet the game is quite fun because of the gameplay loop. It is fun moving around the levels trapping enemies in bubbles while avoiding their attacks. The controls work well for the most part, and each stage is quite quick. Anyone who is a fan of arcade games should enjoy Bubble Bobble 4 Friends The Baron is Back!.

I think one of the main reasons that the game works is because the entire game is co-op. The game supports up to four other players which is always nice. You could play the whole game by yourself, but it is more fun being able to play with another player(s). Having other players also helps because players have the opportunity to save one another when someone gets hit by an enemy. While each player could do their own thing, the game is more enjoyable and works better if players work together to make progress. Players can divvy up the stage to finish a level quicker, or players can work together to deal with enemies that stand in their way. As a fan of co-op games I really enjoyed playing Bubble Bobble 4 Friends The Baron is Back! cooperatively.

As for the game’s difficulty I think it kind of depends. The early levels in the game are pretty easy while the later levels do ramp up the difficulty. The difficulty you get out of the game really depends on what you are looking for. If you are just trying to complete the game, I wouldn’t say that it is particularly challenging. The game gives you quite a few lives to beat the ten stages and the boss for a level. When playing with another player(s) you can save each other which saves you a life. On top of that losing your last life isn’t that big of a punishment. You can continue with where you left off with the only punishment being that you lose the points you have acquired so far. The points are where the game becomes more challenging though. If you want to three star a level you need to play quite well. Between getting large combos to improve your score to avoiding deaths, it is actually quite hard to three star most of the levels. I am far from an expert at the game though, so others might find this to be quite a bit easier than I did.

I would probably say that one of Bubble Bobble 4 Friends The Baron is Back’s biggest issues is the overall atmosphere. I will say that I didn’t expect a whole lot from this area of the game. Most arcade games don’t have much for a story, and the same holds true for this game. The story isn’t necessarily bad, its just that there really isn’t anything to it. On the same topic the visuals are pretty average. I wouldn’t say that they are bad, but for a PlayStation 4/Nintendo Switch game I think they could have been better. The music while nice gets a little repetitive as well. These elements aren’t a big issue for the game, as none are particularly important for an arcade game. I wish they were a little better though.

The original Bubble Bobble 4 Friends was released last year. I would consider Bubble Bobble 4 Friends The Baron is Back! to be more of an expanded experience instead of a new game. This is the first appearance of the game on PlayStation 4 outside of Japan. It includes everything from the original game. The main addition to the game is more levels. The original game featured 100 levels. This new version adds another 100 levels to the game. These levels comprise a tower that you have to climb. You are given a number of lives and you try to get through as many of the levels as you can. When you run out of lives you have to start again from the first level. I personally preferred the normal levels as I didn’t like having to restart from the beginning each time I failed. I can’t complain about additional content though so this version is clearly superior to the original game.

Speaking of new levels you might be wondering how long the game is? I can’t give you a definitive length for the game since I haven’t completed it yet. Even if I had though, how much time you get out of the game is going to rely pretty heavily on what type of player you are. It generally doesn’t take a long time to beat each of the stages in the game. The game does feature 100 stages though which should take a couple hours. The 100 additional levels in the tower should also add quite a bit of time to the game especially if you try to reach the top. If you are the type of player to try for high scores I could see you getting even more out of the game. On top of this the game includes the entire original arcade game which also adds quite a bit to the experience. If you want to replay the levels to try for high scores you likely will get your money out of the game. If you are the type of player to just beat the game and move onto something else though, you might wish the game was a little longer.

At the end of the day Bubble Bobble 4 Friends The Baron is Back! is basically what I was expecting. The arcade gameplay has been popular for three decades for a reason, so it made sense to stick pretty closely to what fans of the franchise have always liked about it. The game has a few new additions to the formula, but for the most part it doesn’t drastically change the main gameplay. Like the other games in the series you shoot bubbles at enemies to trap them inside so you can pop the bubbles and eliminate them. I thought this was a fun mechanic especially when playing with other players. The game is easy enough for casual players, while also providing enough challenge for players that want to set high scores. This new version of the game mostly just adds new levels which while nice don’t drastically change the game in a significant way. Basically much of the value you will get out of the game will come from how much you want to try to set high scores and three star all of the levels.

Bubble Bobble 4 Friends The Baron is Back!