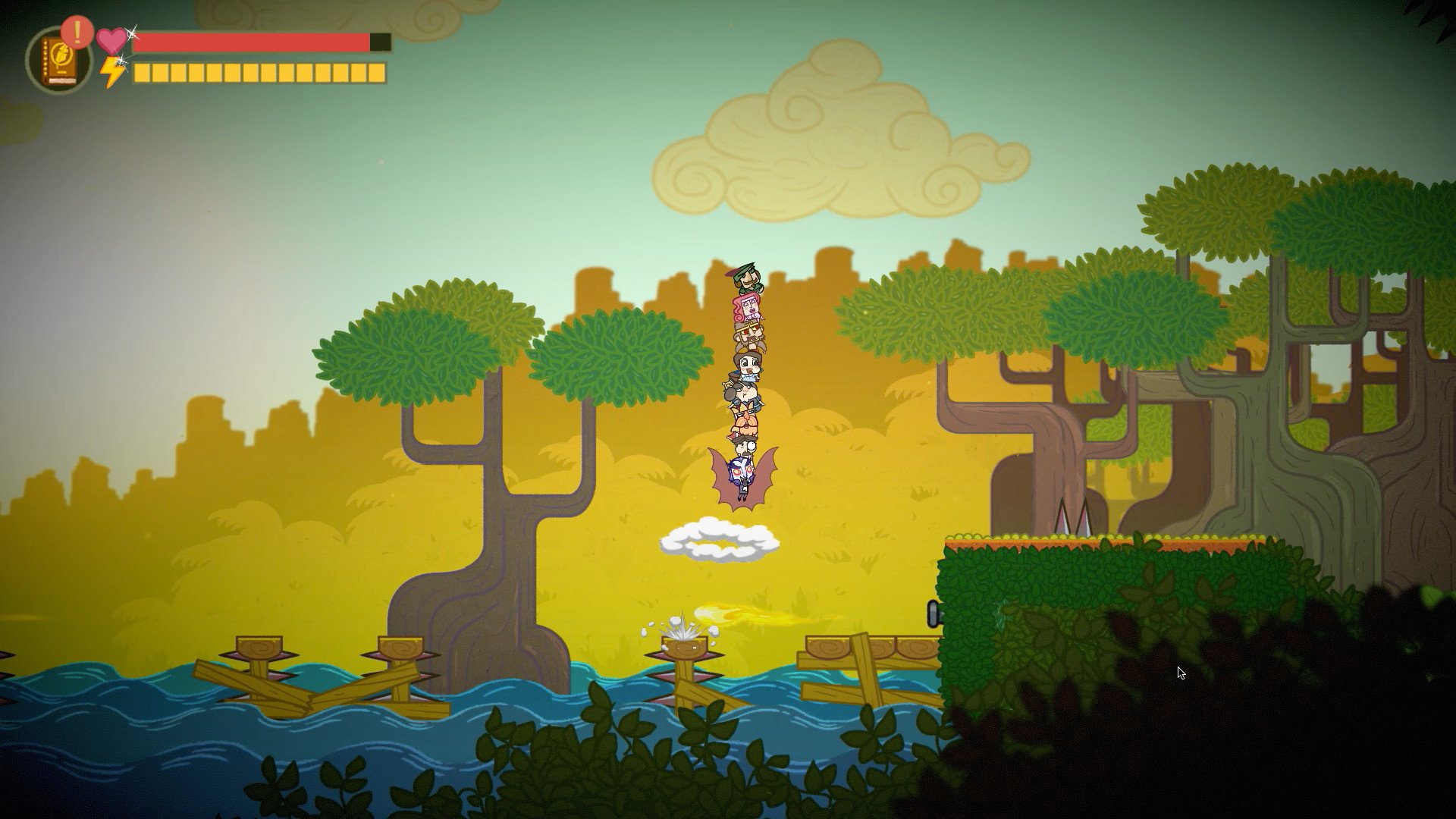 I have played many different video games. Most games fall into one of the typical genres which applies to the theme as well . With the rise of indie video games developers have had the ability to try new things which have lead to some less traditional gameplay experiences. When I first saw Bookbound Brigade it immediately caught my attention. It seemed like an interesting blend of different gameplay mechanics and it also featured a theme that I had never seen used before in video games. The game is all about books/literature. You play as a group of famous literary and historical figures as they try to save the world of literature from some nefarious forces. I thought this was a clever idea that had a lot of potential. Bookbound Brigade is an interesting blend of literary characters and video game mechanics leading to a creative and fun adventure that is occasionally bogged down by imprecise controls.

In Bookbound Brigade you play as the title group which consists of a bunch of characters from history and literature. Everything is peaceful in the world of literature until B.O.B. (Book of Books) is stolen by a mysterious force. With the book that ties all of the world of literature together gone the world starts spiraling into chaos. Characters have gone missing and have lost their memories. Enemies have also sprouted all over the world. As the world around them starts to crumble the Bookbound Brigade must work together in order return B.O.B. to its rightful place and return peace to the kingdom.

Just as Bookbound Brigade features a hodgepodge of characters, the game also features game mechanics from quite a few genres. For this reason lets look at each mechanic individually.

I would probably say that the main mechanic is the platforming element. Like all 2D platformers a big part of the game involves jumping between various platforms to reach the next location. Other than jumping between platforms you also have to avoid various obstacles that get in your way.  As the platforming mechanics aren’t particularly different than your typical game from the genre there isn’t a lot to say about them. They are basically your typical platformer. They aren’t going to change your opinion of the genre but they are still pretty fun. Fans of 2D platformers should enjoy this aspect of the game.

The next major mechanic in the game are the puzzle mechanics. The puzzles mostly feature various switch/lever puzzles where you have to perform a set of actions in a given order to create a path for yourself to proceed. A lot of these sections involve avoiding various obstacles until you reach certain levers or switches. For the most part the puzzles are pretty straightforward. The biggest challenge is figuring out how to traverse the world to reach the elements you need to reach in order to finish the puzzle. There is nothing particularly original about the puzzle elements in the game, but I still had fun with them.

The final main mechanic in the game is the addition of combat. The combat in the game is pretty basic. Mostly the combat comes down to avoiding enemy attacks and pressing the attack button as quickly as possible. The combat reminded me a lot of your typical beat ’em up game as you mostly just spam the attack button while trying to avoid the occasional attack. The combat is decently enjoyable but it becomes a little repetitive after a while. There isn’t a lot of skill to it as you don’t have to precisely dodge or counter enemy attacks. Most of the combat involves the random enemies you encounter throughout your travels with some being more dangerous than others. You will also occasionally reach a boss fight which will have a few special attacks that you will have to avoid as they can deal quite a bit of damage.

At this point these three mechanics don’t seem to be particularly original. The one thing that differentiates these mechanics is the fact that you control a group of characters at the same time. The characters move as a group but each character is also their own entity. This comes into play in platforming as some of the characters may lean over an edge when you don’t jump quite far enough. In combat it means that you have a bunch of little characters fighting for you at the same time. Where the multiple characters really start impacting the game is through the idea of formations. As you acquire more characters you will learn additional formations. These can include a single file vertical or horizontal line, a formation consisting of two rows of characters, and a few other formations. Each of these formations have their own positives and negatives. You can quickly switch between formations which is necessary as you will need to keep switching between formations in order to solve puzzles and avoid obstacles/enemies. While this mechanic has some issues, which I will get to later, I thought the idea was pretty clever and adds some interesting elements to the game.

Speaking of the formations you will also unlock various abilities as you progress through the game. These abilities give you new actions that will help you in your journey. Some help you in combat while others are used to help you solve puzzles and get past various obstacles that stand in your way. These abilities seem to mostly be used to add a Metroidvania element to the game. The world in Bookbound Brigade consists of a set of worlds themed around different types of stories. These worlds consist of a large map full of rooms. You will mostly be traveling from one room to another but you will occasionally encounter an obstacle that blocks your current path. You will eventually unlock the ability needed to deal with these obstacles which will eventually lead you to returning to these locations. As I have never been a huge fan of backtracking I have never been a huge fan of Metroidvania games. I would rather just explore the area instead of having to come back after I have the right abilities. Bookbound Brigade does rely on quite a bit of backtracking. On the positive side the world map has little icons for each room which helps you navigate as well as tell you what people and chests that you have yet to collect.

I would say that the final mechanic in the game is some very light RPG elements. Throughout your adventures you will acquire pages from defeating enemies, opening boxes and chests, and helping out the characters you encounter. You can use these pages to upgrade the stats of your characters. You can upgrade your health, attack power, energy levels (used for abilities), and other stats in order to make your characters more powerful. This is far from deep but it does give you a little control over what you want to emphasize.

At this point I hope that I made it quite clear that Bookbound Brigade is a hodgepodge of various game mechanics. With so many different mechanics the game could have easily become a mess. For the most part I think the mechanics compliment one another pretty well though. None of the individual mechanics are particularly original, but as a group they create a unique experience. I generally enjoyed my time with the game. If you don’t really like any of the mechanics that make up the game it probably won’t be for you. If you like these type of games though I think you can have fun with Bookbound Brigade.

As for the theme I will say that it was one of the first things about Bookbound Brigade that caught my attention. The idea of a game about famous literary and historical characters was a clever idea in my opinion. I am far from an avid reader but I really wanted to see what the game would do with a bunch of characters from vastly different stories/worlds. For the most part I think the game does a pretty good job. The overall story is kind of generic as it is your typical story of a magical artifact being stolen which you must retrieve in order to save the world. The addition of the various literary characters keeps the story fresh though. The game does a good job utilizing the theme to create an interesting world that you want to explore. In particular I liked the game’s art style as it utilizes elements from many classic stories. I thought the various characters were well designed as they are both recognizable and still have character. Probably the biggest problem with the story/theme is the fact that the humor can be kind of hit or miss. The game relies on a lot of pun humor as well as you knowing background information about the characters. The dialogue can sometimes be pretty funny but there are times where the jokes fall kind of flat.

There are a lot of things that I liked about Bookbound Brigade. Unfortunately I though the controls let the game down. A lot of the controls work pretty well as the jumping and combat is pretty precise for the most part. The problem comes from switching between formations. In order to switch formations you need to press a two button combination. This is straightforward and yet it only seems to work part of the time. It makes sense when the game prevents you from changing if one or more characters would get trapped in a wall/floor. The problem is that there are other times when there is no explanation for why you aren’t able to change formation. These controls just seem finicky. This is usually just kind of annoying, but there are times where you have to quickly change formations. When the controls don’t work in these situations it will lead to you being killed. It doesn’t help that the game seems to have to issues with the hit box detection. There will be times in the game where it doesn’t seem like your characters should be hit and yet they are. Ultimately these two issues lead to some frustrating times that feel kind of unfair.

Heading into Bookbound Brigade I was intrigued as the theme of a game based around a bunch of literary characters was a pretty interesting theme. In addition to a bunch of different literary characters the game relies on quite a few different game mechanics as well. The game has platforming, puzzle, combat, Metroidvania and even some RPG mechanics. These mechanics aren’t super original but they work well together leading to a game that I enjoyed playing. The game also utilizes the theme well. The main problem is that the controls are inconsistent. There will be times when you want to change formations and the game doesn’t recognize your input. There are also some occasional issues with the hit boxes being off.

If you don’t really like the literary theme or don’t like the group of mechanics present in the game it probably won’t be for you. If the theme and gameplay sound interesting though I think you will like Bookbound Brigade and should consider purchasing it.