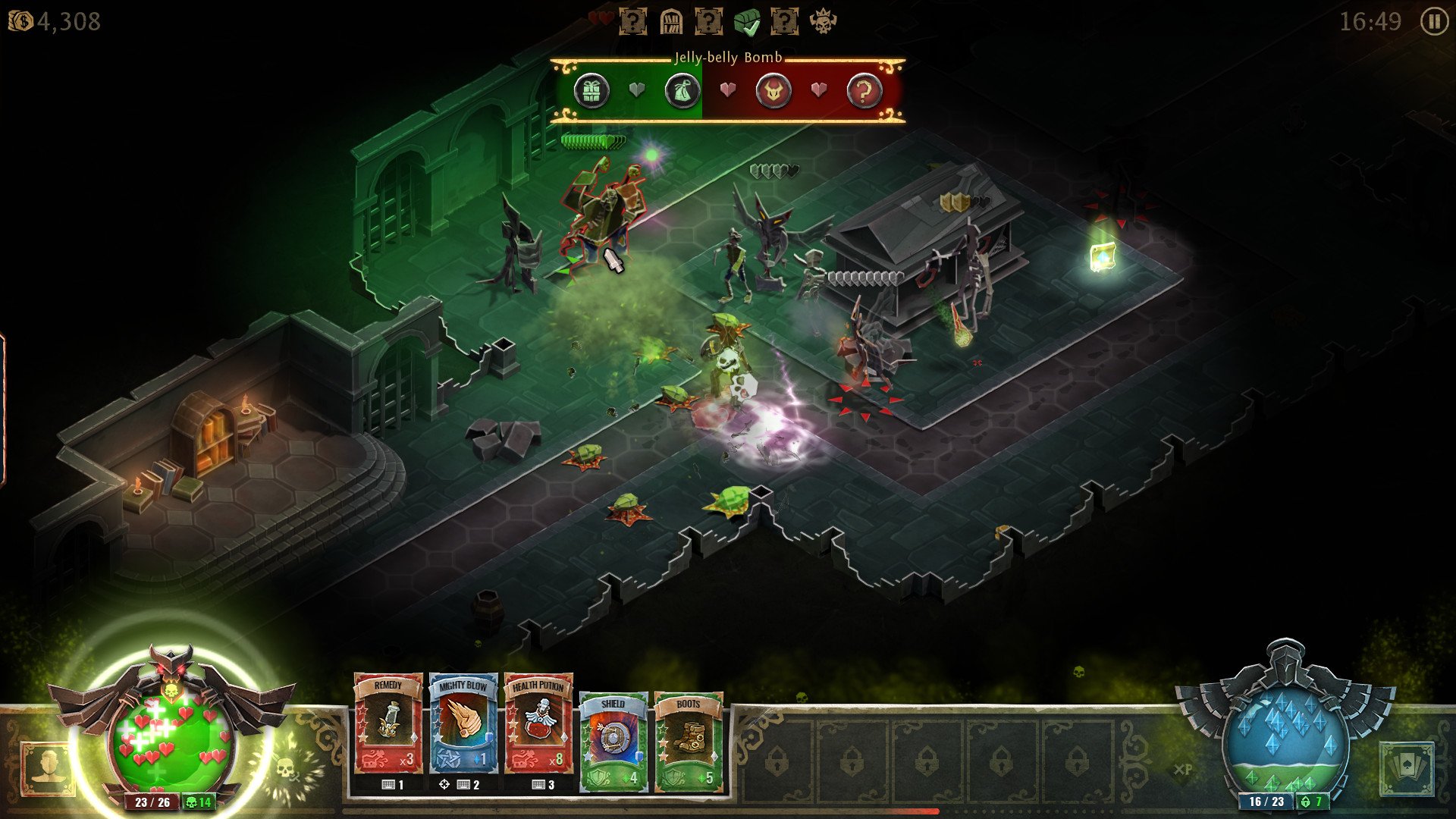 One game I played as a child that I probably shouldn’t have was Diablo. I enjoyed all of Blizzard’s early games but due to the blood and scary themes that game had, I probably shouldn’t have been playing it. I never got very far as I couldn’t handle the “scares” the game provided (remember, this was 1996 and I wasn’t even a teenager yet). I vividly remember being terrified by a creature called The Butcher to the point that I couldn’t continue after I saw it (Book of Demons pays homage to that character with their first boss “The Cook”). I did play more of the sequels as I grew up and I became a fan of the genre. Book of Demons has clearly been heavily inspired by the original Diablo. It isn’t an exact copy (the mechanics are quite a bit different) but it is worthy of being in the conversation with Diablo as one of the best dungeon crawlers ever made.

Book of Demons has a pretty common story for a dungeon crawler, evil has spread and one brave fighter must descend the myriad levels of a dungeon to stop it. The game is a mixture of dungeon crawling and deck-building. You acquire cards that work as items, spells, and skills and can choose the strategy you wish to utilize. Some cards work passively while others require a click of the assigned number on your keyboard to use. The game uses a system called “Flexiscope” that lets you pick how long each adventure is, from “very small” (two levels of the dungeon) to “very big” (which could take you up to an hour or even longer depending on your pace). Book of Demons even gives you an estimated time of completion based on how fast you have been clearing other floors. After you have descended enough levels of the dungeon, you will eventually get a special mission with a boss battle at the end. There are three of these bosses in the game and it took me about ten hours to complete Book of Demons. After the game is complete, there are plenty of achievements to grind (over 200 of them), new classes to try out, and higher difficulty levels (even a roguelike mode where if you die, your progress is wiped if you don’t have enough gold). I’m guessing it will take me at least another 10-20 hours to try everything else the game has to offer (and to unlock all of those achievements).

Unlike games like Diablo, Book of Demons is a rail-based game, meaning your character can’t go wherever you want. You move along the rail, choosing which intersection to go down and things like that. You can’t go wherever you want to, meaning you can’t always just run away from enemies if you are getting low on health. Combat in Book of Demons mostly involves clicking (or holding the mouse down) on an enemy. However, there are a lot of mechanics and obstacles you’ll have to be aware of. These new mechanics are introduced slowly with very informative text when you first encounter them, so you shouldn’t become overwhelmed by them. For example, some monsters have shields that you will have to break first before you can damage them. To do so, you need to aim your clicks at their shield icon. Other monsters can perform spells that you can “block” by clicking and holding on the icon. You can cure yourself of all poison damage you will take just by clicking your health at the right time.

Book of Demons also offers some very nice features aimed at making your gaming experience more accessible and enjoyable. As someone who would probably be considered an OCD gamer, one feature I particularly liked was the game putting down footsteps everywhere you travel (which then turn gold when you’ve been down all of the nearby paths). I am the type of gamer who has to make sure he kills and loots everything in a level, so this feature has probably already saved me an hour (or more) of my time. Book of Demons even lets you know when you are down to five or less things to do on a floor (and you can hover over the number to see what you are missing). When you’ve cleared the floor, you can also just click a stair icon to move on to the next level instead of backtracking to find the stairs again. All of these things help make Book of Demons much more accessible and casual-friendly (while still providing a fun experience for those who have played a lot of games in the genre).

Book of Demons is very similar thematically and it is a dungeon crawler, but one thing I found much different between this game and Diablo is that crowd control is much more important in this game (thanks to the rail system). In Diablo, you can take on a whole wave of monsters and rarely have to retreat. In Book of Demons, I constantly found myself having to slowly thin out the enemies and if I would take on too much at one time, I would die or at least have to get the heck out of there. This isn’t a bad thing, in fact it makes the game more strategic. It just means the game is slightly slower-paced than something like Diablo. I’m sure there are other cards available (that I didn’t get early in my run) that let you deal with crowds of enemies but based on the cards I was dealt, I needed to keep an eye on crowd control.

In terms of difficulty, I would say only the last portion of the game is even remotely difficult as long as you take your time. I only died once in the first two portions of the game (when I was overwhelmed by a horde of ranged enemies) and I quickly learned how important crowd control was (and then never died or came close to dying again). I died a few more times in the “hell” portion but that’s it. However, I was playing on normal difficulty so if you would rather have a more difficult game you could always select one of the harder modes. The game is procedurally generated so that definitely impacts the difficulty as well (I especially hated getting levels with a lot of ranged enemies at the beginning), but it can also challenge you to have to temporarily play differently (and it adds to the replayability as well since no floor will ever be the same).

Diablo may have scared me as a child but as I grew up the later games weren’t nearly as frightening. Even though this game involves demons and various other ugly creatures, I would say it is almost more cute than scary. That’s because the game is made entirely out of cute papercraft graphics. Some of the monsters are still a little freaky looking but the game is far from scary. Using cute papercraft art for a game with a theme like this is kind of an odd fit, but I personally love it. I do love papercraft, origami, and the like though. I’m guessing some people are going to hate this art style choice though.

I personally only found one real negative about Book of Demons and that was the lack of co-op or multiplayer. Dungeon crawler games are always more fun with other players and even the original Diablo offered multiplayer. Other than that, I have no problems with the game at all. I could see some people disliking the combat system (it is a lot different than most dungeon crawlers) or art style, but I personally loved both of them. If you aren’t quite sure if Book of Demons is for you, there is a demo available on Steam you could try.

Book of Demons is the first in a planned series of seven games called “Return 2 Games,” which aim to bring back old-school PC games and genres for today’s audience. Based on how good Book of Demons did with Diablo-like dungeon crawling games, I can’t wait to see what the developers do next. Outside of the lack of co-op, I can’t really find anything to complain about. Book of Demons is a great game that isn’t just an homage to Diablo, it’s every bit as good as it. Highly recommended.