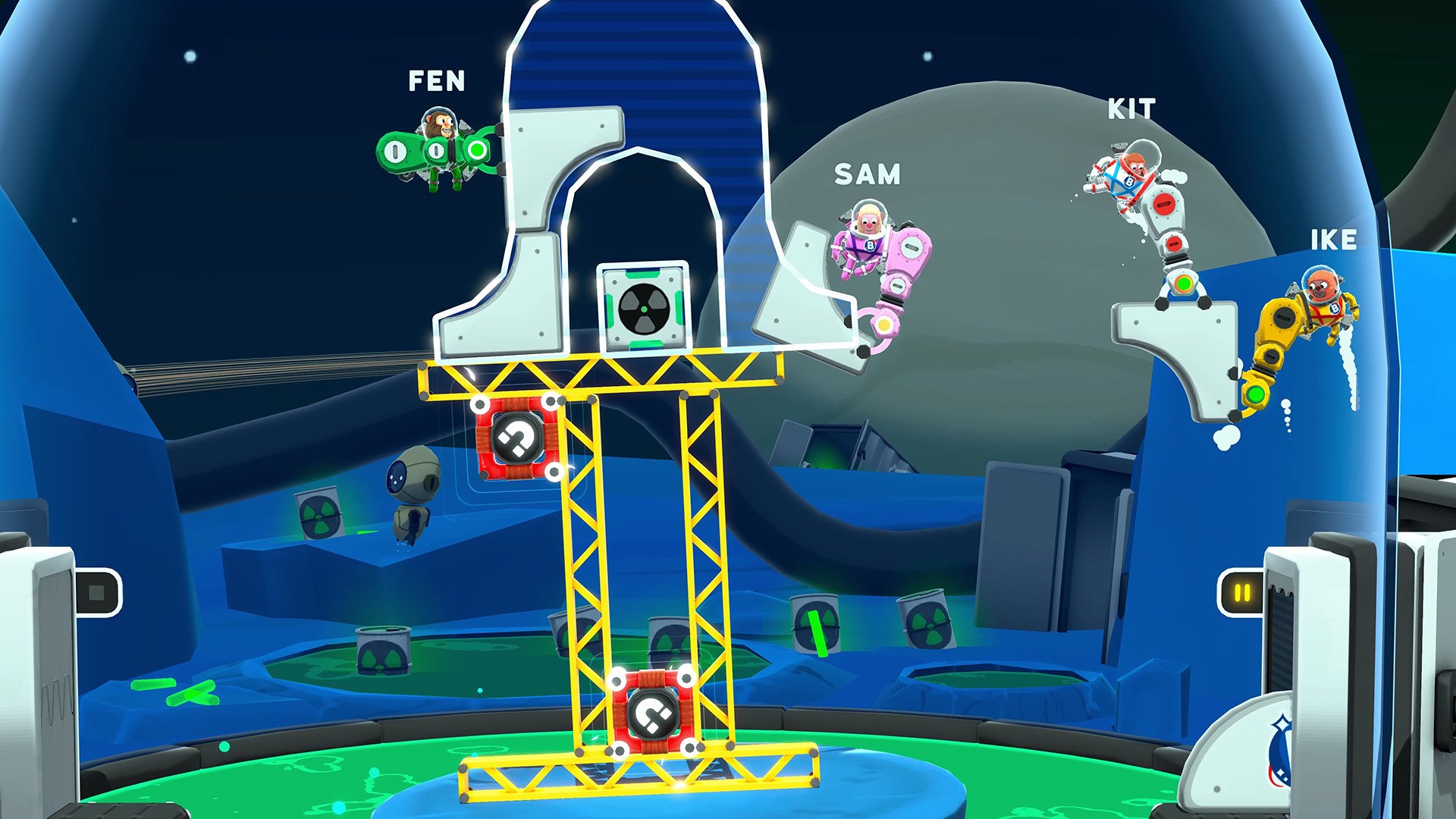 Anyone that is a regular reader of Geeky Hobbies will know that we are suckers for the cooperative indie video game genre. While it is enjoyable playing competitive games, it is hard to beat a good cooperative game. I have been a big fan of this genre ever since I was a kid playing splitscreen games. While you don’t see a lot of cooperative games coming from large studios, the indie market has definitely picked up the slack. I have played a lot of great cooperative games that rely on good teamwork and some silliness as well. When I first saw Bonkies I was immediately intrigued. A cooperative game where everyone plays as an animal wearing a jetpack and a giant robotic arm. Sign me up. Bonkies is pretty much everything you could want from a good cooperative game, a fun game with enough silliness to keep everyone entertained.

In the world of Bonkies you and up to three of your friends/family will control a group of animals on a mission to create various structures. Each animal is equipped with a jetpack and a mechanical arm. In each level you are given a number of objects of different sizes and shapes along with an outline of an object that you must create. The players have to work together to place the various pieces to fit all of them inside the outline within the time limit.

The controls of Bonkies are pretty straightforward. One button is in charge of grabbing whatever object is closest to the mechanical arm’s hand. To control the arm you will use the four main buttons with one assigned to each direction (up, down, left, right). Finally you can activate your jetpack which allows you to move quicker and pull more weight. You have unlimited use of your jetpack, but if you put it under too much stress it will malfunction which will make your character fly out of control for a period of time.

As you progress through the game, things become a little more complicated. You will eventually encounter a number of cubes which have a special impact on the world and other game objects. Some of these include a magnet which attaches to metal pieces, a rocket that continues to push in the direction that it is set, blocks that can hold a certain amount of weight in the air, a block that explodes if you are too rough with it, and a few others. To beat a lot of the levels you need to take advantage of these special cubes in order to create the final design.

If I were to describe what it is like playing Bonkies I would say that it is made up of two major elements.

The most obvious and prevalent is a cooperative element. The game is built around teamwork. Teamwork comes into play in a couple different ways. First the players need to work together in order to build the structures. If players don’t communicate with one another they will get in each other’s way, and could possibly even mess up the structure that is being built. While some blocks can be carried by just one player, many of the blocks require two of more players to lift them. This is due to either their weight or the size/shape of the objects being too unwieldy to be carried by just one player.

As a fan of cooperative games, this was the aspect of Bonkies that intrigued me the most. Thankfully it does a very good job in this area. The game really emphasizes what works for the cooperative genre. To succeed players need to work well together. If you go at it on your own you will likely run out of time, or make many other unintended mistakes. Players need to have good communication and think on the same wavelength in order to succeed. Those that don’t will likely fail which likely will lead to humorous results as your structure collapses in front of you. Bonkies is the perfect type of game to bring out for a party or with your family. The game is simple enough that you can pick it up quickly. Yet there is enough skill/difficulty to it to challenge players of any skill level. Basically if you generally like these type of cooperative games, you likely will love your time with Bonkies.

As for more than one player, I would say that any other player count works most of the time. I ended up playing the game with only two players and I still enjoyed it quite a bit. I don’t know if the levels scale based on the number of players, but most of the levels handle two players pretty well. There are a decent number of levels that recommend three or more players, but you can play them with any number of players. Some of these play fine with less players, but others are really hard if you don’t have the correct number of players. As a completionist I did find it kind of frustrating having some levels that will be very hard to beat with just two players. I kind of wish the game could have found a way to tweak these levels a little to make them more accessible to lower player counts.

The other major aspect of Bonkies is a sort of puzzle element. In a way the game kind of feels like playing Tetris with weird shapes, mechanical arms, and jetpacks. As I mentioned before the goal of the game is to basically fit all of the eligible objects within the outline provided by the game. In most cases there is a very specific way that you have to place the pieces in order to get them all to fit. There are a few puzzles though where you are given a bunch of different objects and you have considerable more leniency as you just have to fit them all inside the outline. In a lot of ways the levels remind me of tangram puzzles. The key to solving the puzzles is being able to visualize how you have to arrange the pieces in order to fit them inside the outline. In some levels this could require a decent amount of thought/planning.

As a big fan of the puzzle genre, I really liked this element of Bonkies as well. I know that some people don’t really care forthese type of puzzles. If you have always hated tangram puzzles, I don’t see that changing in Bonkies with the addition of jetpacks and mechanical arms. Those who enjoy these type of puzzles though are likely to have a blast with the game. I would say that quite a few of the levels are more about execution than figuring out the puzzle. There is still some clever puzzle design in the game though. In most levels there is little margin for error so you need to find the correct way of stacking the pieces.

Before wrapping up I wanted to quickly talk about Bonkies’ length. This is going to somewhat depend on what type of player that you are. The game has six worlds and each world has around ten levels (the first world has around six). Most of the levels have a time limit between 3-10 minutes. While you will complete a decent amount of the levels on your first attempt, there are quite a few levels that will require a few attempts for you to finish. Each level in the game also has two time limits. There is the basic time limit that you need to beat in order to move onto the next level. These times aren’t that hard to beat most of the time. Then there is the time to beat in order to acquire a banana. These times are considerably shorter where you will need to be really efficient. These bananas are used to unlock additional levels and animals. If you try to acquire all of the bananas it will add quite a bit of time to the game. The length is long enough that you don’t really have to worry about getting your money’s worth out of it.

When I first saw Bonkies I was immediately intrigued as I am a sucker for silly cooperative games. The game might not be perfect, but it is a highly enjoyable cooperative game. The gameplay basically boils down to placing all of the objects so they fit inside the outline given by the game. This plays a lot like a tangram puzzle as you figure out how you have to arrange the pieces in order to make them all fit. By the nature of the game you can’t do all of this by yourself. This is where the game’s cooperative mechanics come into play as players need to work together to position the pieces and keep the structure together long enough to complete the level. The game’s cooperative elements work really well as you need good teamwork in order to succeed. Those who love cooperative games will likely love this aspect of Bonkies. While you can play the game with two or less players, there are times where the game discourages this as the game is pretty hard without the required number of players.

My recommendation for Bonkies is quite simple. If you don’t generally like cooperative games or don’t like the tangram puzzles, it probably won’t be for you. Those that love a good cooperative game though will likely love Bonkies and should seriously consider picking it up.