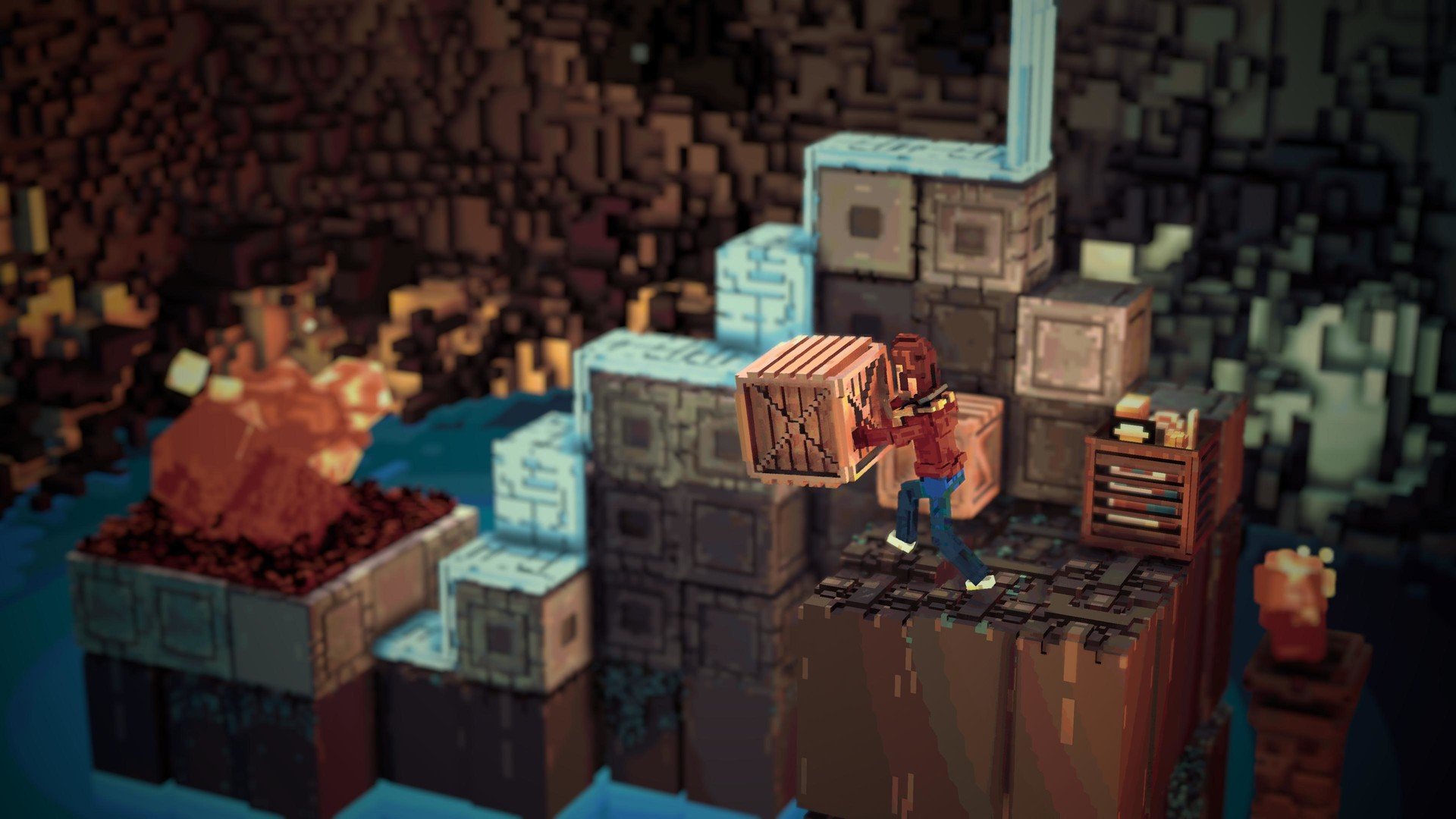 As a big fan of puzzle games, I generally like most types of games from the genre. One of the more popular types of puzzle games are what are referred to as Sokoban puzzles. Basically these puzzles involve moving blocks around an area in order to make a path to move a special block to a designated location. While this isn’t my favorite type of puzzle game, I generally enjoy them. In this review I am taking a look at Bonfire Peaks which basically takes this premise and brings it to three dimensions as you try to burn all of your possessions in a fire. Bonfire Peaks is a fun puzzle game that does a great job using a simple premise to create challenging and thought provoking puzzles that fans of the genre should really enjoy.

In Bonfire Peaks you play as someone who desperately needs closure. You end up traveling to an island filled with puzzles and memories from your past. The only way to get the closure you need to is burn all of your possessions in one of the fires situated around the island.

Bonfire Peaks is a puzzle game through and through. The game is divided into a number of puzzles. The objective of each puzzle is to take a box of your possessions and get it to the fire to burn it. That is not as easy as it first sounds though as there will be obstacles standing in your way of reaching the fire. Once you destroy your box of possessions you will complete the puzzle allowing you to move onto the next puzzle. Getting to the next set of levels can also be a sort of puzzle. Each puzzle you solve will give you a block that you can use in the overworld to help you climb the mountain and reach otherwise inaccessible areas.

The game’s controls are quite simple. The world is built in a grid where you move from one grid square to another. You can move forward or backwards and can also rotate in place to face a different direction. You can also interact with boxes to pick them up and move them to new locations. If you create a stack you can also move several boxes at the same time. You will use boxes to create platforms that you can climb up and also fill in gaps in the world. As you advance in the game new obstacles will make it harder to move boxes around as well as giving you new tools to help you with the task.

Bonfire Peaks is the type of game that most people will likely be able to tell right away if they are going to like it. Basically the gameplay is built around moving boxes around in order to create a path that you can traverse in order to drop the possessions in the bonfire. In a way this kind of feels like a sliding puzzle except that you can pick up and move blocks around. Many of the puzzles are built around figuring out how to manipulate the positions of the boxes to get around the obstacles that stand in your way. While I can’t think of any games off the top of my head, this concept is similar to other puzzle games that I have played in the past. Those who don’t typically care for puzzle games or aren’t that interested in moving boxes around to create a path forward for their character likely won’t get much out of Bonfire Peaks. Fans of puzzle games who have at least a little interest in the premise though should really enjoy Bonfire Peaks.

While the gameplay seems similar to some other puzzle games, what makes the game stand out is the puzzle design. The puzzle design in the game is generally fantastic. I will admit that some puzzles are better than others, but the quality of the puzzle design is generally really high. The general premise of the game never really changes, but the puzzles themselves can differ quite a bit. With such a simple premise of moving boxes around you would think the game would get repetitive after a while. It doesn’t though because the levels are varied forcing you to think of new ways to progress forward. As you advance in the game a number of new obstacles are introduced which mix things up. The game does a really good job creating puzzles that are challenging and fun by forcing you to think of creative new ways of solving them. The puzzle design is easily the game’s greatest strength.

As for the game’s difficulty I would say that it really depends on the individual puzzle. Some puzzles are pretty easy where I was able to solve them almost immediately. Others can be really difficult as they require some clever use of the mechanics. Unless you figure out the twist early these puzzles can take quite a bit of time to solve. While there are puzzles on both extremes, I would say that a majority of the puzzles are somewhere in between where you won’t solve them right away, but they also won’t take forever to solve.

Generally speaking I thought the game’s difficulty was pretty good. I wasn’t the biggest fan of the puzzles on both ends of the spectrum. The easy puzzles are fun, but don’t offer much challenge as I basically figured them out as soon as I saw them. The most difficult puzzles can be a little frustrating at times as many of them require you to take advantage of a clever use of the mechanics that you might not even be familiar with unless you have used it in a previous puzzle. What I liked the most about the game’s difficulty is just the sense of accomplishment when you are able to solve a puzzle that stumped you for some time. Bonfire Peaks does a good job making you feel satisfied when you solve a particularly challenging puzzle.

In relation to the difficulty, one of the things that I really liked about Bonfire Peaks was that the game gives you quite a bit of flexibility in the order that you solve the puzzles. In each section of the overworld there are usually a number of puzzles for your to solve. Generally you only have to solve one or two of the puzzles in order to acquire enough blocks to move onto the next set of puzzles. Thus if there is a puzzle that you are really struggling with, you are usually better off just moving onto another and coming back at a later time. This helps with the really difficult puzzles as it allows you to take a break and refocus instead of banging your head against the wall trying to find the correct solution in order to be able to progress in the game. You might even pick up a trick used in a later puzzle that might help you overcome the problems that you are having with one of the difficult puzzles.

As for the game’s overall atmosphere and story I would say that the game does a pretty good job for a puzzle game. The game doesn’t appear to have much of an emphasis on the story. I haven’t beaten the game so this could change later in the game. The story is mostly told through the environment itself. The atmosphere is considerably better in my opinion. The game utilizes a voxel style which works well for the game. Each of the levels use a lot of the same building blocks, but for utilizing a voxel style the game has a lot more detail than I would have expected. The overworld itself looks quite nice as well.

Lets move onto Bonfire Peaks’ length. I can’t give a definitive length as I haven’t beaten the game. I wouldn’t be able to give a good estimate anyway as much of the game’s length will depend on how quickly you solve the puzzles. If you actually knew the solution to the puzzles I would guess that most would only take a minute or two to complete. Most of the time comes from figuring out how to solve them and using some trial and error to accomplish that. Those who can solve the puzzles quicker will obviously take quite a bit less time to complete the game. According to the developer the game apparently has 196 puzzles along with the puzzles in the overworld required to make it to the puzzles themselves. Their estimate is that most players should be able to beat the game in around 10 hours. Based on my experience with the game that seems about right.

As a fan of a good puzzle game, I was mostly hoping that Bonfire Peaks would be a fun puzzle game that would have clever puzzles to solve. The basic gameplay of moving around boxes to make a path forward might not be the most exciting, but the game succeeds at being an enjoyable puzzle game. The gameplay is pretty simple and feels similar to other puzzle games. The game succeeds though because the puzzle design is really good. The game does a good job forcing players to think of unique new ways of using the mechanics in order to find ways to progress forward. Introducing new mechanics every so often also keeps the gameplay fresh. The difficulty is generally quite good except for some puzzles being a little too easy or hard. Generally the puzzles are challenging enough to make you feel satisfied solving them without being so challenging that they become frustrating. The atmosphere is pretty good even though the story is pretty basic. On top of all of this the game features a lot of puzzles so you should get quite a bit of time out of the game.

If you don’t generally like puzzle games or don’t find the premise to be all that interesting to you, Bonfire Peaks likely won’t be for you. Fans of the puzzle genre that have any interest in the game’s premise though should really enjoy Bonfire Peaks and should consider picking it up.