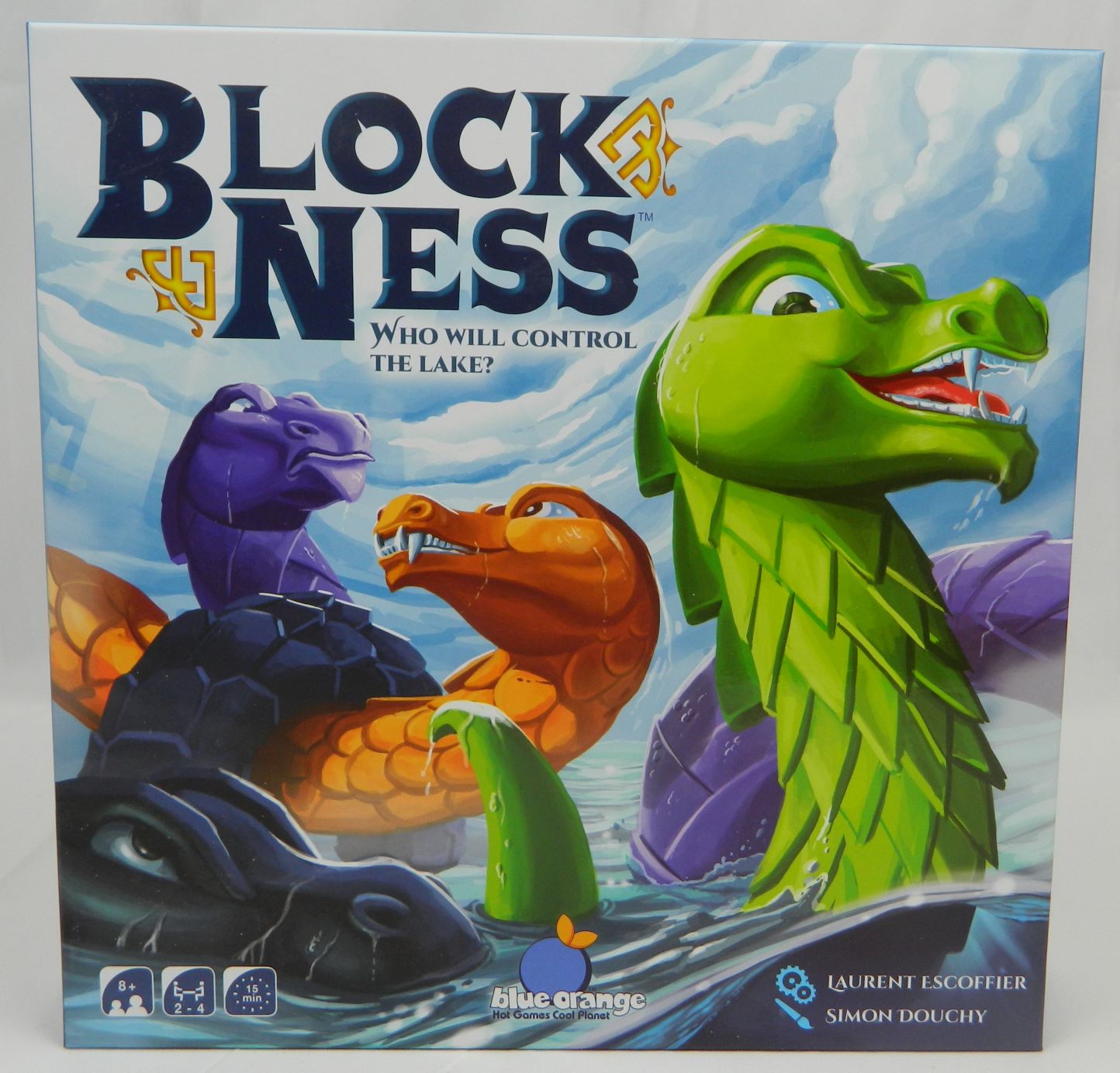 One of my favorite board game publishers right now is Blue Orange Games. One of the main reasons that I like the company is that they do a good job finding and publishing games that find the right balance between accessibility and strategy. The games have enough strategy where it feels like you have a real impact on your fate, while also remaining simple enough that you don’t need to spend a half hour explaining the rules. One of Blue Orange Games newest games is Block Ness where you get to play as a creature very similar to the Loch Ness monster. Basically players are competing to try and grow the size of their creature while competing for space in the small lake. At times Block Ness feels a little random, but the game does a good job creating a game that is simple and interesting that the whole family can enjoy.

How to Play Block Ness

How much of the gameboard that will be used depends on the number of players.

Starting with the first player and moving clockwise players will choose to place one of their dragon parts on the board. A player can choose one of the three spaces adjacent (not diagonal) to either the head or tail of their creature.

The other end of the segment can be placed in any space horizontal or vertical to the first hole. After placing the piece the player will move the head or tail (depending on which end was extended) onto the end of the new piece.

When placing new segments a couple rules must be followed:

You may place a segment that crosses over one of your own previously placed segments. You may also cross over any number of other players’ segments.

After a player places their new segment and moves their head/tail, play will pass to the next player clockwise.

The game will end when no one can play another segment to the board because they either can’t or they have already played all of their segments.

Players will compare how many segments they weren’t able to place. The player that placed the most segments to the board will win the game.

If players want an additional challenge they can add one tweak to the rules. Instead of placing new segments on a space adjacent to the head or tail, all segments will be placed two spaces horizontally or vertically from the head or tail.

My Thoughts on Block Ness

The objective of the game is to try and place as many of your pieces on the board as you can. Each player can either add a new piece to the front or back of their creature. You can place pieces over other parts already played to the board, but the new pieces must be higher off the ground than the pieces already on the board. Thus players will weave their creatures through each other as the board slowly starts to fill up. More cutthroat players can also try to cutoff the other players in order to limit where they can place future pieces. The player that is able to play the most pieces wins the game.

If this sounds simple, it should. The game is really aiming to be a game that the whole family can enjoy, and it succeeds in that task. Basically you just take turns placing pieces with the only rules being that you can’t place a piece over a tail or head or under another piece. That is pretty much all there is to rules. This means that the game can usually be taught to new players within just a couple minutes. The game has a recommended age of 8+ which seems about right. I would say that Block Ness does a really good job of making an abstract strategy game that the whole family can enjoy.

Combined with the game’s simplicity is the fact that the game plays really quickly. The game’s length will somewhat depend on the number of players and how long players debate what they should do on their turn. Even the longest potential game is still pretty short. I attribute this partially to the fact that analysis paralysis can never really take hold. There are quite a few different moves that you can make in the game, but it doesn’t take too long to analyze your options as you can only place pieces off your creature’s current head or tail location. As you advance in the game your number of options decrease due to the board filling up, which makes decisions much easier to make. I honestly would guess that most games could be finished in fifteen or so minutes. This makes Block Ness a great filler game if you don’t have much free time or need a break from more difficult games.

The game is so short that in a way I wish it was a little longer. I wouldn’t make the game drastically longer, but a couple more pieces and a slightly larger board would have been appreciated. I like that the game plays so quickly and it really helps make the game more family friendly. If there were more turns though, players would have had more strategic options come into play. This would have added a little more strategy, and reduced a little of the luck. I wouldn’t have made the game drastically longer, but I think a couple extra pieces would have improved the game.

In general I enjoyed playing Block Ness. The game is not perfect, but it has enough going for it where I enjoyed my time with it. Block Ness does a good job balancing between making the game accessible, while still giving players enough options. To do well in the game you need to make smart plays with your pieces. Basically you don’t want to back yourself into a corner where you limit where you can add pieces to the head or tail of your creature. Before placing your next piece you need to analyze the board to see where the other players can block you. Whenever possible you want to place a piece that will open up more options for you on future turns.

Other than always trying to give yourself more play options on future turns, there are a couple other things to consider before placing a piece. The game doesn’t have a ton of different strategies, but there are two main approaches to the game. The first is to play more passively. I generally prefer playing my lowest pieces first as the taller pieces give you more placement options once the board becomes more crowded. Basically your goal with this strategy is just to last as long as possible and hope to be able to play all of your pieces. Otherwise you could play a more confrontational game where you actively try to cut off the other players eliminating them from the game. I honestly don’t know which strategy is inherently better as in one game two players ended up sharing the victory and they pursued different strategies.

I will say that it is usually pretty easy to play most if not all of your pieces to the board. Unless the players play really aggressive, it is usually pretty easy to find a way to open up new play options on future turns. Unless multiple players gang up on one player, you likely will be able to play all but maybe one or two of your pieces. In a lot of games at least one player will be able to play all of their pieces. This makes the tiebreaker quite important at times. I don’t know if I would really consider this to be an issue for the game, but those that are looking for a real cutthroat game where it becomes hard to place your pieces, may be a little disappointed.

Probably the biggest issue that I had with Block Ness is that it can feel a little random at times. Your strategy in the game is important, but a good strategy will not guarantee you success in the game. This is mostly because the other players’ moves in the game seem to have as big of impact on your fate in the game as your own moves. If the other players mostly leave you alone you have a good chance of winning the game. If they don’t though, you likely will struggle. At least with four players you can never truly predict what you are going to be able to do on your turn. Thus you can never plan too far ahead meaning that you mostly need to hope that the other players don’t mess with your strategy. If you are the type of player that wants to have full control over what happens, you may become a little frustrated with this element of the game.

One of the things that I have always liked about games made by Blue Orange Games is that you can usually expect pretty high quality components especially for the price. That holds true for Block Ness as well. While I wish the board was a little bigger and more pieces were included, mostly because I wish the game was a little longer, I really didn’t have any complaints about the components. The gameboard is made of pretty thick cardboard and it slides into the bottom of the box for more support. The creature parts are made from plastic, but I really liked them. They have scales on them which serves no gameplay purpose, but really helps make them stand out. The pieces insert into the holes in the board really easy as well. While important for the gameplay, I was a little hesitant about moving the head or tail every time a new piece was played as I thought it would be a hassle. The pieces are much easier to move than I expected though so they don’t create any real issue for the game.

Should You Buy Block Ness?

While typically not the biggest fan of abstract strategy games, I generally enjoyed playing Block Ness. The game basically consists of players placing pieces to extend the front or back of their creature following certain rules when crossing pieces already placed on the board. Players can either play passively just trying to add all of their pieces, or more aggressive actively trying to cutoff the other players. The game is really easy to play and plays quickly. There is still enough strategy to the game though where your choices matter. I think the game does a good job being accessible for the whole family while still remaining enjoyable for those looking for a deeper game. Sometimes other players’ actions seem to play a bigger role than your own though, which may turn off some people.

If you don’t find the game’s premise to be all that interesting or you aren’t a big fan of games where other players’ actions can really mess with your strategy, Block Ness may not be the game for you. Those intrigued by the premise and are looking for a game that the whole family can enjoy though, should have fun with it. For these people I would recommend looking into picking up Block Ness.

New Kids On The Block Game Board Game Review and Rules Where To Purchase: Blue Orange Games