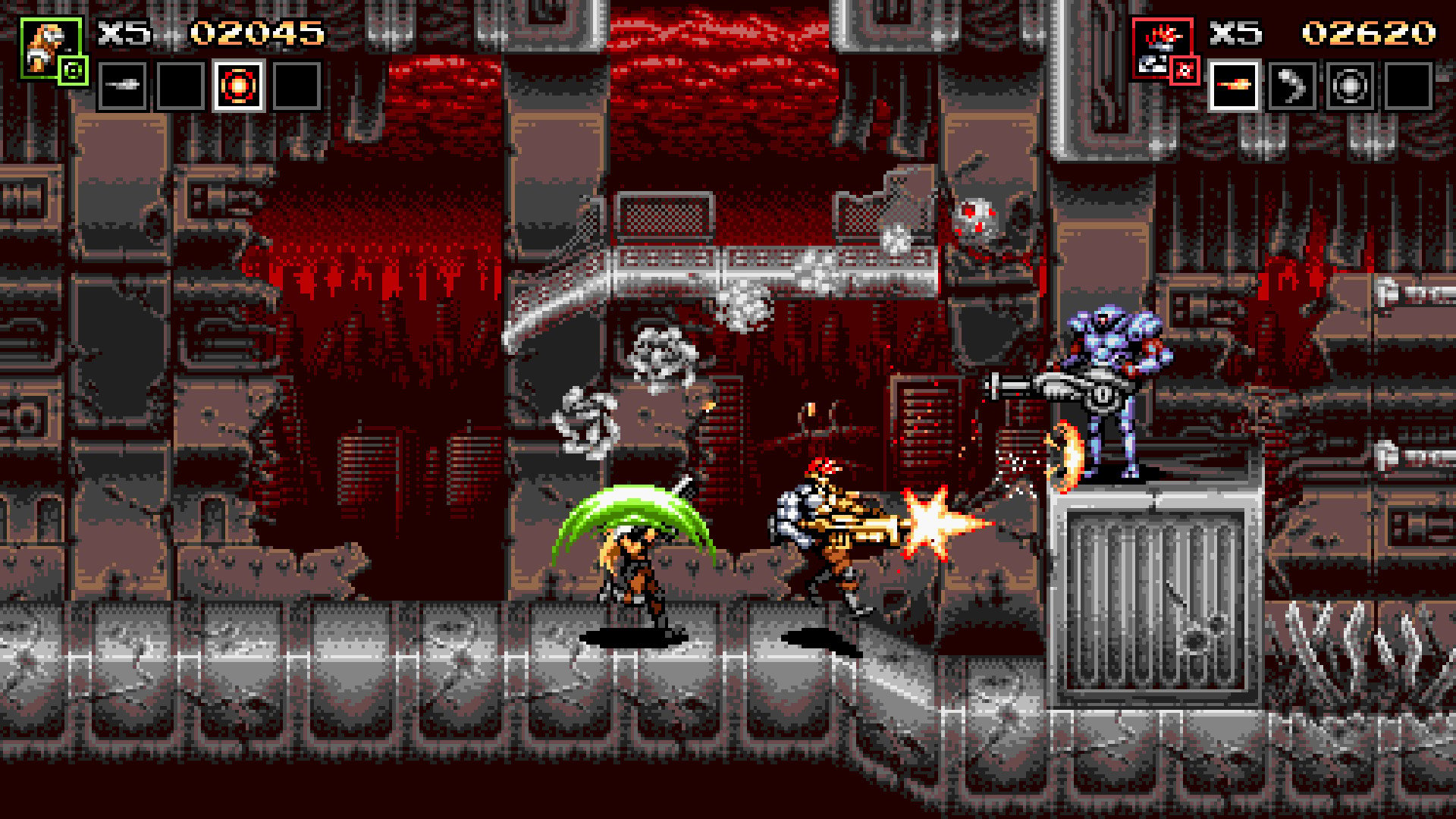 Originally released back in 1987, the Contra series of video games have a very dedicated fanbase. The Contra series has had quite a few games released over the years, but in recent years the series has been mostly ignored. While fans wait for the newest Contra game that is expected to be released in a couple months, Blazing Chrome has stepped in trying to be a spiritual successor to Contra. I have always had mixed feelings about this genre of games. While they are fun to play, I have never been a huge fan because the games are generally quite hard and I have never been particularly good at them. Blazing Chrome does a fantastic job paying homage to the Contra series creating a fun retro experience, which includes the hard difficulty, that fans should enjoy.

In the distant future AI controlled robots have taken over the world. Humanity has been almost entirely eliminated forcing the survivors to hide from the robot overlords. A band of rebels have tried to end the robot threat, but a recent surprise attack has killed most of the remaining rebels. The few remaining rebels strive to destroy the robot power plant ending their threat forever. In Blazing Chrome you can play as one of two remaining rebels: Mavra the human resistance fighter or the reprogrammed robot Doyle. Will you succeed in your mission and destroy the robot threat forever?

In reviews I usually like to detail the gameplay so readers can get a good idea of what it is like to play a game. In the case of Blazing Chrome I don’t think it is really necessary. The game is basically Contra. If you have ever played Contra before you know exactly what to expect out of the gameplay. For those of you not familiar with Contra, Blazing Chrome is basically your typical sidescrolling shoot ’em up. You move from left to right trying to destroy all of the enemies in your way. You have to avoid the enemies bullets as one hit will immediately kill you. There is also some light platforming, but you will mostly be shooting a bunch of enemies and trying to avoid their bullets.

As soon as I began playing Blazing Chrome the 80’s/early 90’s nostalgia was immediate. The game doesn’t try to hide that it is heavily inspired by shoot ’em ups from the Nintendo and Super Nintendo era. I am far from an expert on Contra but it is obvious that Blazing Chrome took inspiration from it. The graphics are pixel art and look like they were taken right out of the early 90s with the added advantages of better technology. If you have fond memories of games from this era you will love the game’s art style. Even the story seems familiar as the premise shares a lot in common with Terminator. Basically fans of 1980s and early 1990s shoot ’em ups should really enjoy Blazing Chrome.

So fans of Contra are probably wondering how difficult Blazing Chrome is. One of the reasons people like Contra and other similar games is due to their difficulty. I will say that I am far from an expert on Contra as I have never beat a Contra game. Therefore I can’t say how hard the game will be for a Contra expert. In my opinion though the game is far from easy. It truly has that old school video game difficulty. This is mostly due to the one hit and your dead mechanic.

One of the main reasons I have never been a huge fan of games like Contra is due to their difficulty. I don’t mind when games are difficult, but these type of games can be unforgiving at times. The games punish you for every mistake you make as each hit kills you. This includes some cheap deaths where it doesn’t even feel like you were hit by an enemy. All of this is present in Blazing Chrome, but I didn’t mind it as much as some other games.

That is mostly because the game includes three difficulty levels: easy, medium, and hard. Hard mode is locked until you beat another mode so I can’t comment on how difficult it is. The main difference between the different modes is how much help it offers you. The first two difficulties offer you more lives and include checkpoints throughout the levels. I ended up playing the game on medium difficulty and I can say that it is still quite difficult. Even with the checkpoints saving you from having to restart from the beginning of the level, it is quite hard to beat the levels as I can’t remember how many times I died in each level. While the difficulty will turn off some people, people who like a challenge won’t be disappointed.

I personally have never been a huge fan of the shoot ’em up genre. I don’t hate the genre but I wouldn’t call it one of my favorites. Despite this fact I actually liked Blazing Chrome quite a bit. The controls are responsive and it is just fun blasting away the enemies. Due to the difficulty it is also really satisfying being able to finish a level after dying so many times.

It didn’t hurt that the entire game can be played splitscreen co-op. If possible I would highly recommend playing the game co-op as it is just more enjoyable playing the game with another person. With two players you can also cover each other’s back which makes the game a little more manageable as well. I can’t imagine how hard Blazing Chrome would be if you played the game by yourself.

I had fun with Blazing Chrome and fans of these type of games should enjoy the game even more. Blazing Chrome has one big problem though and that is its length. The game appears to only have six levels based on the achievements. The levels are pretty long as each has several checkpoints, but that is still not a lot of levels. If you could beat all of the levels without dying very much, you could probably beat the game within an hour. Unless you are an expert at these type of games that won’t happen as you will die a lot. I still don’t see the game being that long though. Most of the game’s length will come from replaying the levels to improve times/scores and beating the game on different difficulty levels. Normally this wouldn’t be a huge issue but the game is $17. The levels are well crafted but I think the game could have included more for that price. If you are a huge fan of Contra the price might not be a big issue. If you aren’t a huge fan of the genre though this might be a reason to consider waiting for a sale.

Basically Blazing Chrome wears its inspiration on its sleeve. It is a modern reinterpretation of the classic Contra gameplay. You basically run and gun shooting all of the enemies that get in your way. If you have ever played Contra or another similar game before you should already have a good idea of what to expect out of Blazing Chrome. I give the game a lot of credit for doing a fantastic job recreating the genre from the graphics to the gameplay. The game even replicates the old school difficulty. Even at the easier difficulties the game is still quite difficult. Be prepared to die a lot unless you are an expert at these type of games. The one thing I wished the game didn’t recreate from the genre though was the length as it only has a few levels. While it will take you some time to beat the levels, unless you plan to replay them a lot you won’t get a lot of replay value out of the game.

As far as the rating I ended up rating the game as someone who doesn’t mind the shoot ’em up genre but is also not a huge fan of it. If you are a huge fan of the genre though, I would guess you could add at least another full star to the rating

So my recommendation for Blazing Chrome comes down to your feelings on Contra and other similar games. If you have never really cared for these type of shoot ’em ups or don’t like games with old school difficulty, Blazing Chrome probably won’t be for you. People who only somewhat like the genre should maybe wait for a sale. If you really like Contra though I think you will love Blazing Chrome and should consider picking it up.