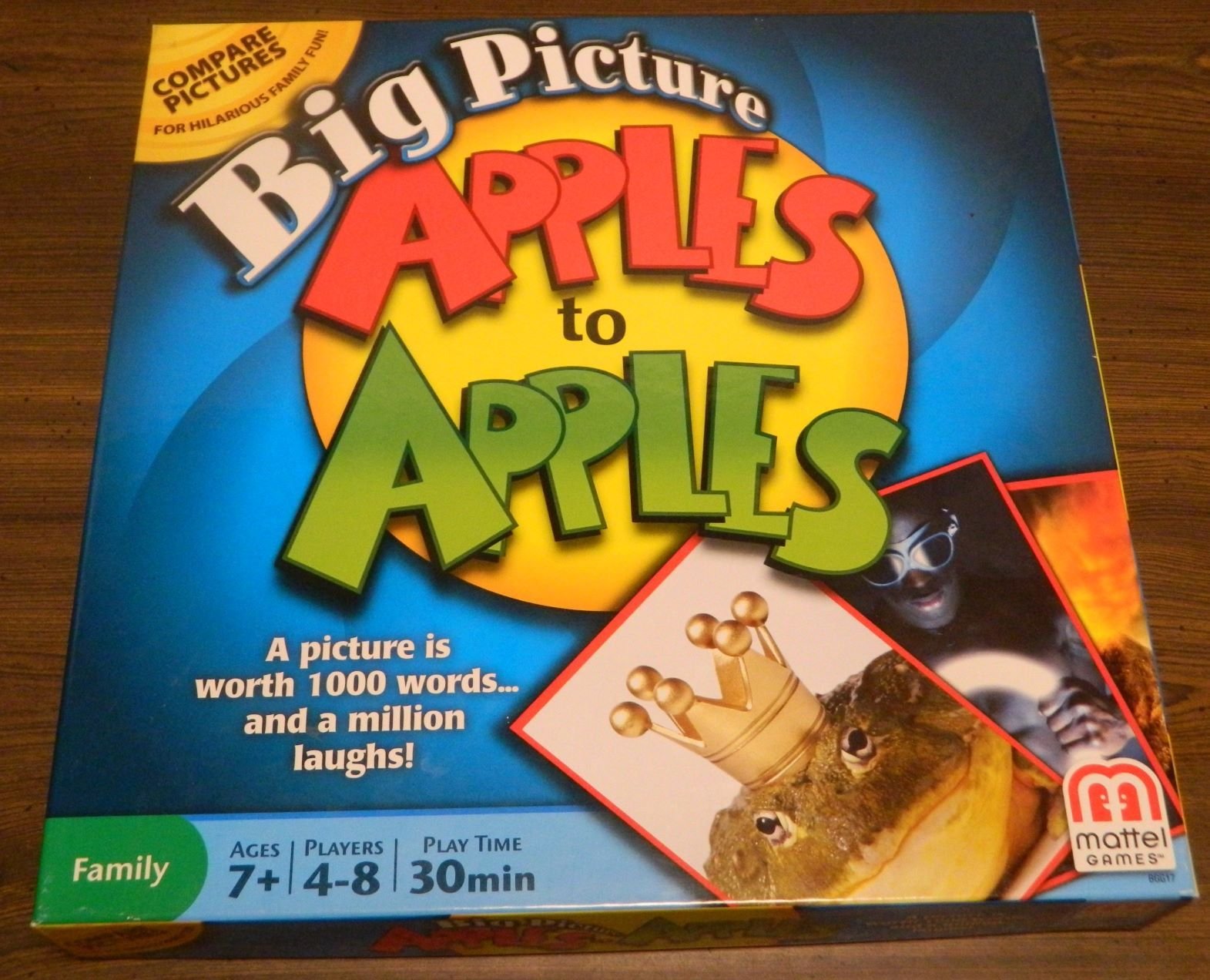 How to Play Big Picture Apples to Apples

The rest of the players will then pick one of the red cards from their hand that they think fits the chosen word. When a player has chosen their card they will place it face down on the table. Once everyone has chosen their card, all of the cards will be shuffled together.

If there are five or more players you can choose to use the variant rule where the last player to choose a card won’t have their card judged with the other cards. The card is returned to the player’s hand and they will have no chance of winning the round.

All of the chosen red cards are then flipped up and the judge studies them. Players then have the opportunity to make a case for why the judge should pick their card or not pick the other cards. After deliberating the judge will choose the red card that they think best fits the word for the round. The judge can use any criteria they want from the card that fits best to the card that is funniest. The player whose card was chosen will get to take the green card for the round which counts as a point.

All of the red cards used in the round are discarded. Players who played cards in this round will draw a new red card from the draw pile to replace the card they played. The player to the left of the current judge will be the judge in the next round.

The first player to acquire four green cards from winning rounds will win the game.

My Thoughts on Big Picture Apples to Apples

Seeing as the game is a spinoff of the original Apples to Apples it shouldn’t surprise anyone that Big Picture Apples to Apples shares a lot in common with the original Apples to Apples. As a matter of fact outside of a few slight tweaks Big Picture Apples to Apples is basically the original game where the word cards have been replaced with pictures. For those of you familiar with Apples to Apples or one of the other similar games, you should already have a pretty good idea of how the game plays and whether or not you will like it. For those of you not familiar with the genre of games the premise is quite simple. In each round one of the players will play as the judge who will pick one of the words on the green card they draw. The other players then play a card that either best matches the word, is the funniest, or has some other connection to the chosen word. The judge then chooses which of the cards they think works best or they enjoyed the most and gives the green card to the player which acts as a point. The first player to earn four points wins the game.

With the game’s rules being so simple it is not surprising that Big Picture Apples to Apples is really easy to play. Anyone familiar with one of these type of games can pick it up immediately. Players who have never played one of these games before can be taught the game in maybe a minute or two. There aren’t any complicated mechanics in the game which means anyone can play it. This is one of the things that I liked most about the original game. The gameplay is so simple and yet so satisfying as well. This makes the game perfect for family gatherings or even parties. While the original game is simple to play you could make a good argument that Big Picture Apples to Apples is even easier to play as it doesn’t require as strong of reading or language skills. Instead of having to read all of your cards to choose one, you just need to know what the word for the round is and then pick a matching picture.

Being a fan of the original game and the genre that it indirectly ended up creating, I was really interested in seeing how the picture mechanic would work out. For the most part the game plays exactly like what you would expect a game of Apples to Apples with pictures to play like. The core mechanic of playing cards that match the current round’s prompt still works well with the change to pictures. The gameplay feels a lot like the original game and yet it feels like it adds a little twist as well. It is still really satisfying finding the perfect card for a round and getting a laugh out of the other players . Just like with the original game Big Picture Apples to Apples is still a great game to just have fun with friends and family. The ultimate outcome doesn’t really matter as it is more about having fun than actively trying to win the game.

While I liked Big Picture Apples to Apples I just don’t think it lives up to the original game. The main reason why I believe this is that the cards you use to match the prompts just don’t work as well. I think this is due to a couple reasons.

The biggest culprit is that the pictures themselves can be pretty hit or miss. I think this is mostly due to there being some mixed messaging in the pictures. Basically the pictures in the game can be broken down into serious images and silly images. As our group likes to play these type of games for laughs we significantly preferred the silly pictures. The silly pictures were better for a couple reasons. First it seemed easier to use them. The problem with the serious images is that they only work for very specific prompts. Thus if one of those words aren’t chosen you aren’t going to get much use out of the cards. Otherwise the silly cards are just funnier. Even if you didn’t have any pictures that really fit the current prompt you could maybe get a laugh out of the judge and still win the round. Some of the pictures are so random/silly it is hard not to get a laugh out of just looking at them. If you can combine them with the perfect prompt it becomes even better as you could get a lot of laughs out of the players.

The other reason that I don’t think the cards work as well as the original game is because there isn’t as much flexibility with the cards. While some of the silly cards can be used in a couple different ways, there are too many cards that can basically only be used in a couple different ways. What I liked about the original Apples to Apples is that you could interpret quite a few of the word cards in several different ways. This provides players with quite a few options. Options are key in a game like Apples to Apples as the rounds where you don’t have any good cards are pretty boring.

For this reason Big Picture Apples to Apples relies on quite a bit more luck than the original game. Getting good cards in the game goes a long way towards helping you win the game. In particular the silly cards usually give you more options. Luck is important in the game as you can only use the cards you are dealt. There will be times in the game where you have no cards that will work for a round. All of the players will likely encounter these situations but the more you can avoid them the better. While Big Picture Apples to Apples is not really the type of game where you care about the ultimate winner, it is good to have cards that give you a chance of winning a round. The game really suffers when there are rounds where no one has a good card. For the judge it then becomes a question of which card is the least bad.

While easily correctable I was also not a big fan of the rule change where you only need four cards/points in order to win the game. I thought the number of cards you needed to win in the original game wasn’t enough. Then for some reason the game required even less cards in the sequel. Unless you are playing the game with a lot of players, it won’t take very long to acquire four cards. With just four players I could see the game only taking 15-30 minutes. With more players though the game’s length grows exponentially unless one player dominates the game. This is more of an annoyance than a real issue though as you can easily fix it by choosing however many cards you need to win before the game begins. If all of the players agree this won’t be an issue and allows you to make the game as short or as long as you want.

People that have checked out our review of other Apples to Apples style games are probably familiar with my group’s favorite house rule for these type of games. For those of you who don’t know, our group always likes to play with a random player. Basically for the random player we choose a random card and add it to the cards submitted by the other players. We found that this can be a fun variant rule as the “choices” by the random player can range from quite good to totally random. Some of the random player’s choices have lead to some of the funniest moments that we have ever experienced in one of these type of games.  In some games the random player actually does surprisingly well beating players who are actually trying to play the game. Well in the case of Big Picture Apples to Apples the random player was horrible as it was only able to earn one card. This is not that surprisingly but it was also kind of disappointing.

As for the components I was actually kind of surprised by Big Picture Apples to Apples. With the game featuring pictures I assumed the game would have quite a few less cards. The number of cards in the game is actually quite similar to what can be found in other versions of Apples to Apples. The pictures can be a little hit or miss but the cards are of a solid quality comparable to other versions of Apples to Apples. One change that I was not expecting that I actually really liked was the change to the Green Apple cards. In most versions of Apples to Apples there is only one word on each Green Apple card. Thus when you draw the card you are stuck with the word unless you add a house rule that you can choose another card. In Big Picture Apples to Apples each green card has two words on it. Outside of giving you more word prompts, having two words on each card gives the judge some options over the prompt for their round. This increases the odds that players will be able to pick a good card as the judge can disregard the word they don’t think the other players will have cards for.

) adds more cards that can either be added to Big Picture Apples to Apples or the original game.

Should You Buy Big Picture Apples to Apples?

If you would like to purchase Big Picture Apples to Apples you can find it online: Amazon