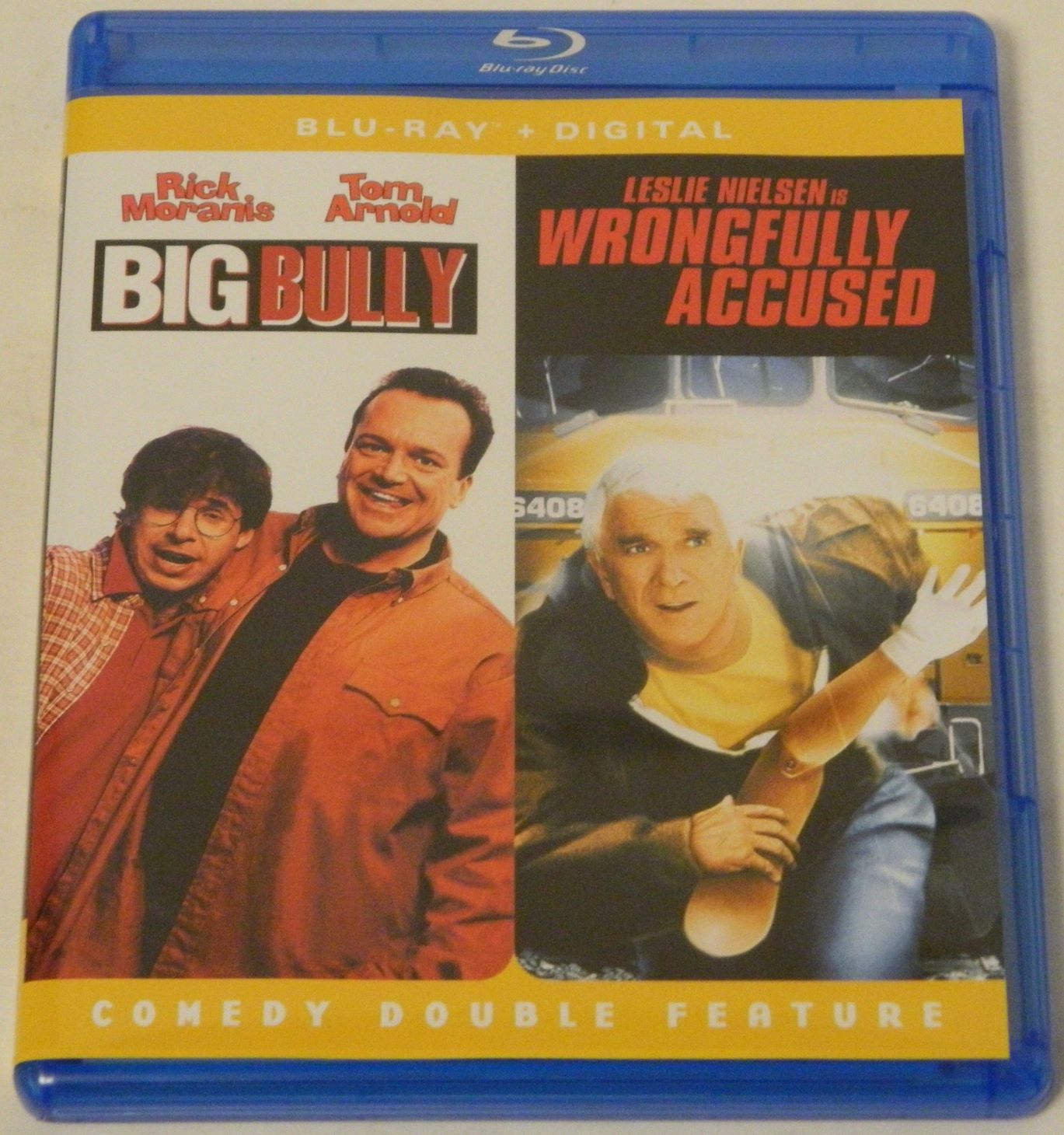 Double feature sets usually have a pretty obvious theme to them. Whether it’s a two-pack of a smash hit and its sequel, the original and its remake, two movies starring the same actor, or just two comedies that share a lot in common, there’s usually something tying the two films together. Outside of both being comedies produced by Morgan Creek Productions which take place in Minnesota, Wrongfully Accused and Big Bully don’t really share that much in common. They definitely aren’t similar in the quality department for sure. I enjoyed one of these two films more than I expected to while the other fits squarely into the bad category. To find out which movie is which, you’ll have to read on.

Like most kids, I had a pretty bad taste in movies when I was young. Between the Ernest movies, Leslie Nielsen films (in particular his lesser-regarded ’90s titles like Mr. Magoo), and of course the Teenage Mutant Ninja Turtles I used to watch a lot of “crap” that I now have a lot of nostalgia for. As an adult, I now realize that these are not good films but I do enjoy them anyway as they are still a lot of fun to watch. What can I say, I’m in my thirties but I’m still a child at heart. Wrongfully Accused was one of the few Leslie Nielsen spoof films of the time that I wasn’t able to watch as a kid (probably due to its PG-13 rating). I wasn’t exactly expecting much with its rather low ratings from critics (though its IMDB rating isn’t terrible) but I actually wound up enjoying the film quite a bit. I would say only about 40-50% of the jokes land but there’s so many of them that I rarely went more than a minute or two without at least a slight chuckle. Wrongfully Accused is not exactly high-brow entertainment but it’s funny enough for those who don’t take things too seriously.

As per usual with Leslie Nielsen films from the late ’90s and early ’00s, Wrongfully Accused takes a popular movie from the time (in this case The Fugitive) and spoofs it with rapid-fire pop culture references (prepare for a bunch of Titanic ones in particular), slapstick comedy, and some of the dumbest jokes that you’ll still find yourself laughing at. Nielsen plays the role of celebrity violinist Ryan Harrison, who is seduced by a millionaire’s wife. When he shows up at her mansion to make it clear he’s not interested in a married woman, he is attacked by an assassin and framed for the millionaire’s murder. He is convicted and sentenced to prison but escapes when his prison transport van is involved in an accident. He escapes and sets out to clear his name, but an officer (Richard Crenna) is always right on his heels attempting to put him back behind bars.

I will definitely admit that a lot of the humor in Wrongfully Accused is of the low-brow variety and as such, I can definitely see why the critics and some viewers don’t like it. There’s erection jokes (and other sexual humor that earns this film its PG-13 rating), dated pop culture references that a large amount of people today weren’t even alive for and probably won’t understand, and parodies of media as diverse as Star Wars, Scooby-Doo, Baywatch, and North by Northwest. Obviously that’s not the type of comedy that critics or certain audiences enjoy. While I don’t enjoy bad spoof films like Disaster Movie and the like, I do enjoy Nielsen ones and others that aren’t completely childish or thrown together in a day. Of course many of the jokes in Wrongfully Accused are still childish or dated but there’s plenty of pop culture references, dumb comedy, and slapstick bits that got a laugh out of me.

Maybe I’m just childish but things like Ryan getting a Gatorade shower after his violin performance, the inspired North by Northwest plane joke, a gun even more impractical than anything Andy Sidaris has to offer, and the entirety of the train scene made me laugh. There’s more than enough actually funny content to make up for the jokes that don’t land or are cringe-worthy. And it’s not just Nielsen who brings the laughs, Richard Crenna is nearly his equal in the comedy department. As long as you don’t take this film too seriously (I’m not sure why you would take any Leslie Nielsen movie seriously), it can often be laugh-out-loud funny and even when it isn’t, you’ll still be at least chuckling every other minute or so.

Basically, Wrongfully Accused is Leslie Nielsen to a tee. It’s not something that serious film fans are going to enjoy but for those who like his “so stupid, they’re funny” comedies, it’s a bit of a hidden gem. It certainly isn’t as good as his classics like Airplane! or The Naked Gun series but it’s still well worth the watch for Nielsen fans. 3.5/5

While 95% of the reason I wanted to review this Blu-ray release was due to Wrongfully Accused, I still had some hope that Big Bully would also be better than its reception on IMDB (where it sports a pretty terrible 4.7 user rating). My faith in it wasn’t that high but I still elected to watch it as I’ve been surprised by films with worse ratings than that before. Alas, it wasn’t to be. Big Bully is exactly the film its cumulative IMDB rating would indicate, a mediocre to bad film that has a muddled story and way too little comedy to earn a recommendation for most audiences.

Big Bully stars Rick Moranis as writer David Leary, who gets an offer to return to his hometown of Hastings, Minnesota to teach a creative writing class at his former middle school. David has a lot of bad memories of his time in Minnesota, mostly due to his school bully Rosco “Fang” Bigger (Tom Arnold). Thankfully, he was able to move to California during his middle school years but not before turning Fang in for stealing a moon rock. Even with his bad memories, David still elects to return to Hastings to teach the class. Unfortunately for him, Rosco is also working at the school as a shop teacher and despite appearing mild-mannered at first, has definitely not grown up or moved on. As you might imagine, Rosco starts picking up where he left off by bullying David for the pain he “caused” him during his childhood (despite Rosco clearly being 100% in the wrong). Meanwhile, David’s son has turned into a bit of a bully himself who begins targeting Rosco’s nerdy son.

While I don’t have a lot of nice things to say about Big Bully, I do have a few things. First of all, it’s always lovely to see the very likable Rick Moranis show up in a film (even though his character in this one is a bit childish). He isn’t given a lot of good content to work with but he does what he can to squeeze out any bit of comedy in the script he can find. While it’s a very small role, Jeffrey Tambor is also a highlight as David’s overly friendly neighbor Art. It’s too bad he’s only used for a few scenes and ignored for nearly the entire second half of the film. Also, the film did provide a few chuckles here and there so it’s not entirely without humor. The comedy just isn’t nearly as frequent as you would hope for a straight-up comedy like this.

Unfortunately, that’s really all the good things I have to talk about with this film. While I wouldn’t say it’s an awful movie, it is certainly below average to flat-out bad. The main culprits are the film’s lack of humor and a story that is pretty childish, muddled, and ends without any real message being conveyed. Much of it doesn’t even make sense. The movie wants us to believe that David is acting just as childish as Rosco (I even thought it was all in David’s head but no, the movie’s not clever enough for that), when he is the one being bullied (and sometimes assaulted) by a 35-year-old shop teacher and is simply standing up for himself. Not exactly the best message to send that if you try to stand up to a bully, you’re supposedly acting like a child yourself.

I don’t like what they did with the story here at all, there were many better ways to deal with a story involving bullying and they picked probably the worst possible option. Better ideas would have included Rosco realizing that bullying is wrong and working with David to stop the new bullying situation with their sons, it all being in David’s head (to show that bullying leaves scars that don’t always heal), or at least blatantly showing that what Rosco is doing is wrong instead of it being both their “faults.” The message in this film is terrible (and this is supposed to be a movie for families) and it isn’t exactly fun watching a grown man act like a child either. Even worse, it just waves the awful behavior of Rosco and the terrible messaging away in the last ten minutes and acts like it was no big deal.

Big Bully isn’t entirely without merit but it is almost certainly one of the worst films on Rick Moranis’ resume. There is some comedy but not as much as I was hoping for and certainly not enough to make up for the terrible story and awful message the film sends. Unless you have fond memories of Big Bully during your childhood or have a lot of time on your hands, this is a pretty easy skip. 2/5

Both Wrongfully Accused and Big Bully are making their Blu-ray debuts via this release. Now granted, these aren’t exactly the types of films that really need to be seen on Blu-ray and I can definitely see why it took so long for them to show up on the format. While you can tell neither film got a loving restoration or anything like that, I do own the Wrongfully Accused DVD and there is still a noticable upgrade in video quality. Of course ’90s comedies are not going to look the best on the format or utilize the increased visual quality as much but these two films look fine for a bargain release like this. As usual though for Mill Creek double feature packs, no extras are included outside of a code for digital copies which can be redeemed via movieSPREE.

Like a lot of Mill Creek double feature releases, I ultimately found one of these two films to be worth the watch while the other was at best a below average throw-in. Wrongfully Accused is a pretty funny Leslie Nielsen parody film that should be enjoyed by fans of that sort of comedy. Unfortunately, Big Bully isn’t nearly funny enough to make up for its problematic story and messaging. The video quality on both is acceptable to good though neither are the type of film you absolutely need to have on Blu-ray in the first place. If you know for sure you love one (or both) of the films, it’s probably worth the upgrade. For those who haven’t seen either, I think Wrongfully Accused is worth the watch (and a 3.5/5 rating) and Big Bully (2/5) is an easy skip. Whether or not that’s worth the price of admission, that’s up for you to decide.

Big Bully/Wrongfully Accused Comedy Double Feature will be released on Blu-ray on October 6, 2020.