To be the first player to move around the entire game board and reach the finish line first.

The players either divide into teams or play individually. Each team takes a playing piece, tile board, zwap tile and two Bezzerwizzer tiles of one color. Each team places their playing piece into the tile bag and one player pulls out one of the pawns to determine who gets to start. All of the playing pieces are then placed on the starting space and the category tiles are placed into the tile bag.

At the beginning of each round each team draws four tiles from the tile bag. Each team decides in which order they would like to answer the questions. The first question is worth one point while the last question is worth four points. The tiles are placed face up on the team boards to indicate in which order the questions will be asked. Typically a player would want to put categories they know better in the spaces worth more points.

Beginning with the first team, the questions worth one point are asked to each team. If a team answers correctly, they move their pawn forward one space. After all of the one point questions are answered, the two point questions are asked. Every correct answer earns two spaces on the game board. Gameplay continues like this until all teams have been asked all four of their questions. If no team has reached the finish space, the current round ends. All of the category tiles are put back into the tile bag and each player/team draws new categories for the next round. Any used Bezzerwizzer or zwap tiles are returned to their teams. The next team clockwise will be the first player in the next round.

After A Question is Read

In all of these situations the team will lose the chip used until the end of the round.

Before A Question is Read 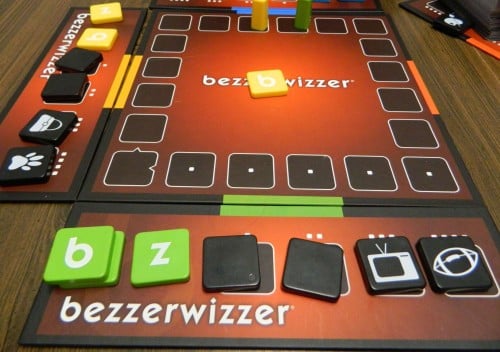 If an opponent is in the home stretch (the last spaces on the board with a white dot on them), an attacking player that earns positive points can choose to use those points to send back the player in the home stretch by that many spaces instead of moving themselves forward.

The green player has reached the home stretch. At this time any player who earns points by using a Bezzerwizzer tile can use points earned in order to send the green player back instead of moving themselves forward. 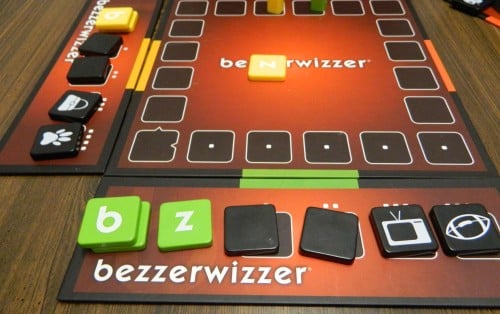 When a team reaches the finish line the game ends. If all teams have not been able to answer the same number of questions, the additional questions are asked. If only one team reached the finish space, that team wins. If multiple teams reach the finish space at the same time, each tied team will draw tiles from the tile bag at random and answer the corresponding question. Whenever only one team gets their question correct, that team wins the game.

A New Take On the Trivia Game

The trivia game has been around for what seems like forever. Popularized by games such as Trivial Pursuit, the trivia genre is one of the more popular genres of games for casual board game players. There are a lot of people that either love or hate these type of games. Bezzerwizzer claims on its’ box that it is different than traditional board games and in some ways it actually is.

Let’s begin with dice rolling. Bezzerwizzer has absolutely no dice in the game. This is a great idea in my opinion since adding a die only adds luck to a trivia game. Trivia games should rely on the knowledge of the players and not on the roll of a die. You are never going to eliminate all of the luck in a trivia game since luck will always be present in which questions are asked to which player. By eliminating the dice though the game avoids having a player win just because they rolled better.

By removing the die, Bezzerwizzer also improves the process of choosing a category. Tiles are drawn from a bag at random so no player can impact what categories they start with. If players just got to choose their own categories the game would be pretty boring. With twenty different categories, most topics are covered so everyone should have a couple categories that they are good at. Some of the categories are pretty unique for a trivia game. I don’t know if I have ever seen another trivia game have an architecture category before. If there are some categories that you aren’t particularly good at, you can put these categories on the low value spaces which means they won’t hurt you much if you don’t know the answer.

The arranging of the categories is actually one of the more interesting mechanics in the game. I like that the game lets you organize your categories based on how comfortable you feel about the topic. This works really well with the ability to make one category switch during each round. The ability to switch tiles can have an impact on the game and how players decide to ultimately place their tiles. You typically want to play your best category tile on the four space but you may want to reconsider that. The longer you keep a tile out on the game board, the more likely another player will use their zwap tile to steal it from you. If you are afraid that another player may steal your favorite category you may decide to play it in an earlier round than you would want to in order to improve the odds that another player won’t decide to steal it from you. While this mechanic doesn’t add a lot of strategy to the game, it does give players some options.

Finally the game includes the Bezzerwizzer tiles which do a good job keeping players engaged during other player’s turns. I like that the game gives you different options on when you want to play the tiles. If you are really confident about a topic you can play a tile before even hearing the question. If you are not confident in a category though I would not recommend blindly playing Bezzerwizzer tiles since you lose a point if you are wrong. If you want to play more conservatively you can choose to wait until after a question is read. You might end up racing another team to play your chip first though.

Just the Right Level of Difficulty

The good news with Bezzerwizzer is that for the most part the difficulty has a good balance between being too easy and too hard. Most of the questions I would classify at a medium difficulty level. Some individual questions are too easy or too hard but as a whole people who aren’t trivia buffs can actually do somewhat well at the game.

While Bezzerwizzer doesn’t have anything spectacular with regards to the components, the game does have some of the better components I have seen in a trivia game.

The game comes with 150 cards which translates to 3,000 questions which should last quite a while. You may eventually end up repeating questions but unless you have a photographic memory you will likely not remember most of the answers.

Another thing I liked about the components where the tiles. The tiles are made of a nice thick plastic and the symbols are simple enough that each category is pretty easy to figure out just by looking at the tile. The only complaint I had with the tiles is that I wish the symbols were engraved into the tiles. With extended use the paint might start to chip off the tiles which will make the tiles hard to read. The tiles are well made though so I am assuming the paint will last for quite a while.

Bezzerwizzer is one of the better trivia games that I have ever played. While not making any huge additions, Bezzerwizzer does add a little strategy to the game which helps out quite a bit. While some questions can be too hard or too easy, most questions feel like they are the appropriate level of difficulty.