Each player gets four ships of the same color with one ship of each color being placed in each port. Sort the cards based on their type (sugar, oil, bananas, lumber and home port). Shuffle each type separately and place them on their corresponding spot on the gameboard face up. Assemble the storm cloud, align the notch with the the letter A on the cloud, and place the cloud so the center of the cloud is on the red circle on the gameboard. The letter A and the notch should be facing north. 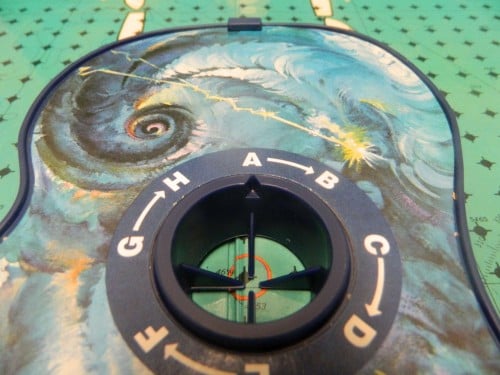 Each players’ turn begins with rolling the die. The player then picks one of their ships to move around the board following the spaces (white ships). Ships can only move in the direction indicated by the spaces and can’t move both directions. After all of the players have made their move, the Bermuda Triangle Cloud is moved (see below). 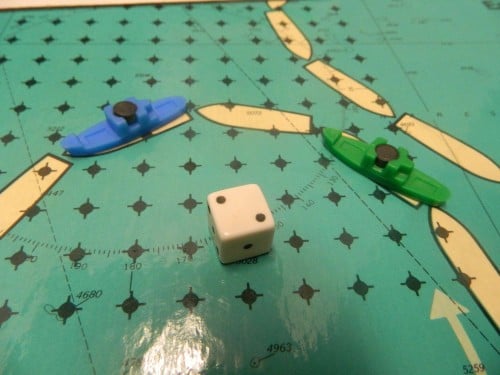 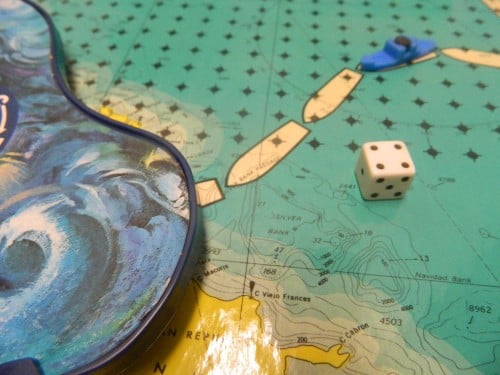 In this situation the blue ship pictured cannot move the four spaces indicated by the die. If the blue player has no other legal moves they must move their ship two spaces which is the closest space to the cloud without going under it.

A player can only enter a port if there is an empty space at the port. Each port can only hold as many ships as there are players in the game. For example if three players are playing, only three ships may be in each port at a time. Each player may only have two of their ships in the same port at any given time. When a player enters a port they take the top card from that port. If they are in the home port they get to take one of both types of cards. If all of the cards in a port are gone, players will no longer receive anything for visiting that port. 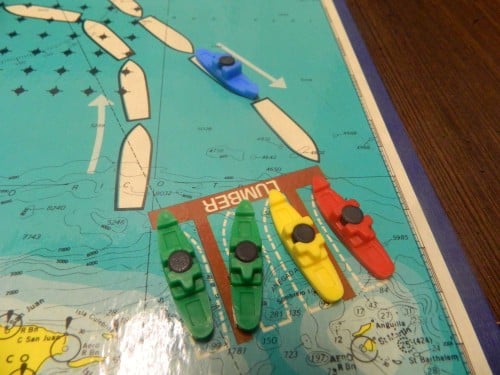 In this situation the blue ship will be unable to enter the port until one of the other ships have left the port.

After all of the players have made their move for the current turn, one player will spin the spinner to determine the rotation and the movement of the cloud. 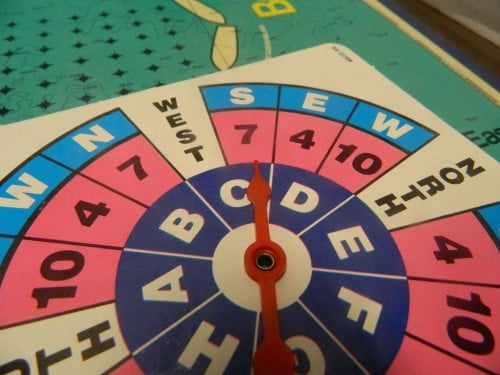 With this spin the cloud would first be spun clockwise until the letter “C” is facing north. The cloud would then be moved 7 dots south. 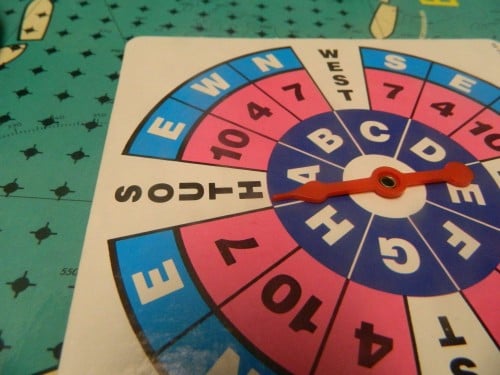 In this situation the cloud would first be rotated until the letter “A” is pointing north. The cloud would then continue moving south until it reaches the last dot.

The game can end in one of two ways. First if one player has reached $350,000 or whatever value the players agreed to before the beginning of the game, that player wins the game. The game can also end if one of the players lose their final ship to the cloud. In this case whoever has the most money when the last ship is taken is the winner. The player who lost all of their ships can still win if they have the highest valued cargo.

Back in the 1970s through the early 1990s, there were two trends that permeated the board game industry. Board game publishers like Milton Bradley liked to make board games based on popular television shows/movies or trends like the Bermuda Triangle in this case. These companies also started to try and create some unique mechanics to add to traditional roll and move genre. Some of these new mechanics were interesting and fun, some were before their time, and some were just bad. I would say that the Bermuda Triangle game falls into the middle category.

The cloud mechanic could have been a huge hassle but the game does a good job of making it easy to use. Basically you first rotate the cloud based on the letter spun and then just move the cloud the number of spaces and direction indicated by the spinner. The first couple of turns take a little getting used to but you will then have no issues with moving the cloud. I actually really liked the idea behind the movement of the cloud. The cloud is not just a gimmick and actually has an impact other than sucking up ships. The cloud does a fantastic job of blocking off some of the paths that your ships can take between ports.

The problem is that the cloud does too good of job blocking off paths. In the game I played the cloud pretty much blocked the path between the banana and oil ports for the entire game. Only one ship was able to move through the path since the cloud was blocking it for the rest of the game.

I am curious whether this was just unlucky spinning or if this is just a flaw with the game. I tend to think that this is somewhat intentional since the oil port does have the most valuable cards and the board seems to be set up in a way that the cloud will regularly block this path. The game would have benefited from having more spaces for the cloud to move to. The cloud is constantly hitting one of the edges. I hope this was not part of the gameplay design because it almost ruins the game. Since ships were never able to get to the oil port, a serious logjam begins forming near the banana port. No ships were able to make progress so all but a couple ships ended up around the banana port. It got to the point where no one was even able to move.

While the cloud mechanic is interesting, it feels like a wasted idea. The cloud just does not work as well as it should have. There is very little strategy in Bermuda Triangle. You pretty much roll the die and move one of your pieces. You might as well not put too much thought into your movement decision since you can’t predict what is going to happen next with the cloud. You just take a guess on which ship is best to use. The only real strategy you can implement in the game is to try and use your ships to block other players from entering a port.

The Bermuda Triangle game also has a problem with its’ winning conditions. I don’t know if it is just me but I don’t like that one of the end conditions is when one player loses all of their boats. This is a pretty necessary ending condition though because otherwise players would end up sitting around waiting for the other players to finish. My biggest problem with it is that the player that loses all of their boats can still win the game. That doesn’t make any sense thematically or gameplay wise. Why would the player who lost all of their ships, be the winner? I think if a player lost all of their ships, they should be eliminated from winning the game. This would encourage players to be more cautious and try to avoid the cloud. With this rule a player in first might actually want to destroy all of their ships in order to end the game quicker.

Overall the component in Bermuda Triangle are decent. The magnets work well even with the game being almost 40 years old. The ships are also kind of neat. The Bermuda Triangle cloud works okay. I wish the notch on the cloud was easier to see which would have made it easier to spin the cloud. The cloud also has some issues while moving it. Sometimes it is hard to keep the cloud level while moving it. The dots by the center fold of the gameboard are particularly bad. Sometimes the dots on the gameboard are also hard to see which requires one of the players to stand up just to make sure the dots are being followed correctly. The cards are made of a kind of cheap cardboard which is typical of a game from this era. Also while the artwork on the gameboard is not bad, it is kind of bland/boring.

Bermuda Triangle is the perfect example of a game that came before its’ time. The game had some good ideas for a game but the execution failed. I could see some house rules really benefiting the game though. If some house rules could be created that would add some strategy and reduce some of the luck, I think the game could be quite a bit better than it currently is. For example a rule where ships could move either direction after leaving a port could have given players more choices for movement. An additional rule would have had to be added though where a ship could only change directions at one of the ports or players would just exit a port and re-enter it on the next turn in order to take another card.

Bermuda Triangle had the makings of a good idea but it came out before its’ time. The cloud element had the potential to be an interesting mechanic but it fails to add anything to the actual game since it seems to never really move around the gameboard. With the cloud element not adding much to the game, it ends up being a pretty average roll and move game. If you want to put in the effort to come up with some house rules though, I think the game could be improved quite a bit. If you really love roll and move games or the Bermuda Triangle, you could get some enjoyment out of the game. If that doesn’t describe you, I would probably pass on Bermuda Triangle.

Thanks for the rules. I found this game in my attic but the rules were missing. I just finished playing with my grandson and it certainly not as fun as I remember as a child, although my grandson seemed to like it.