Skip to content
Board Games » Reviews » Dexterity » Bellz! Board Game Review and Rules 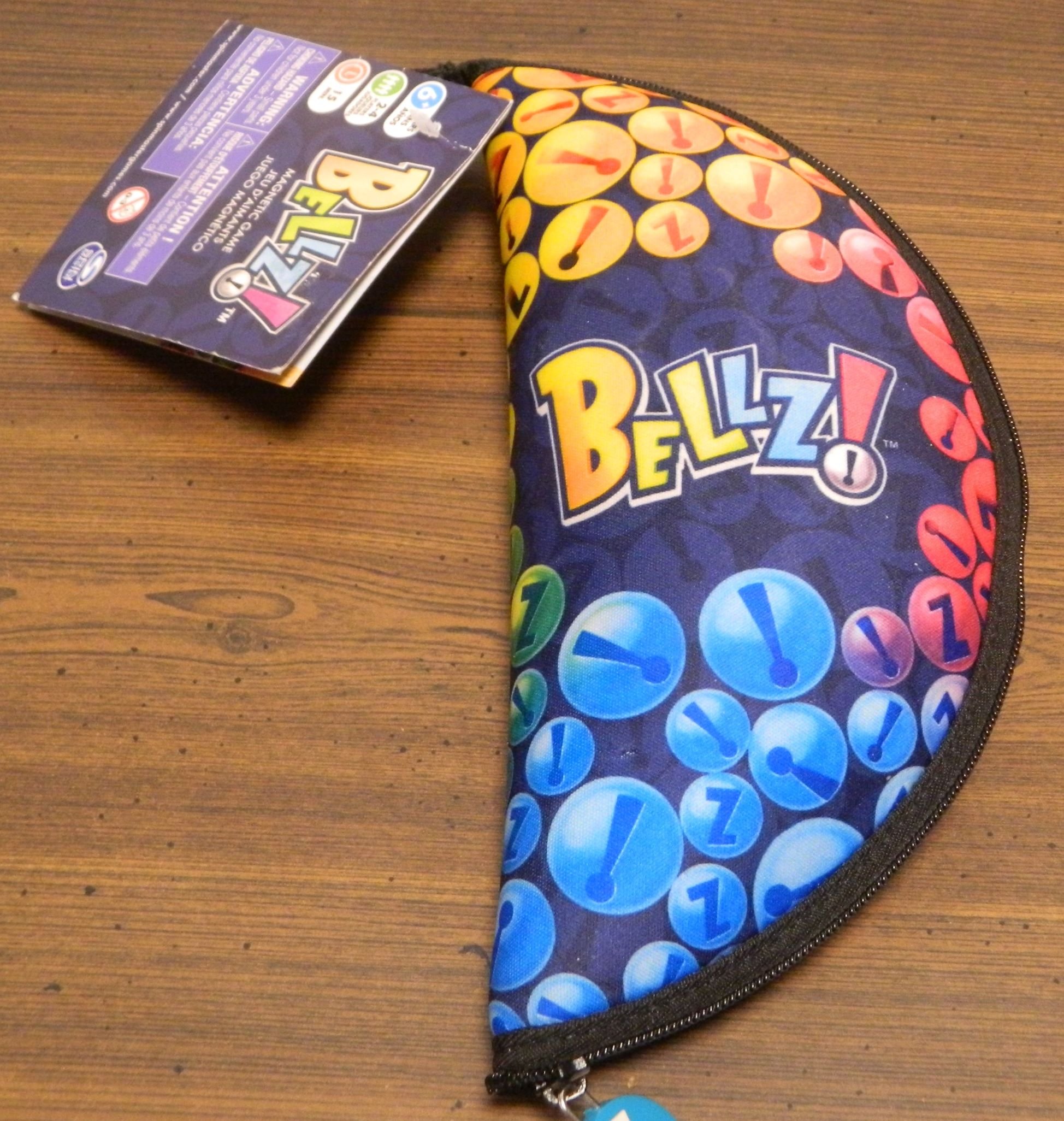 How to Play Bellz!

On a player’s first turn they will choose which color they will collect in the game. Players can choose any color that hasn’t already been chosen by another player.

The player will then choose whether they want to use the larger end (stronger magnet) or the smaller end (weaker magnet). They will then begin using the magnet to collect bells of their chosen color. When collecting bells you can either collect them in a large clump or you can have one bell attached to another to form a line. You may only collect bells of your chosen color.

At any point during your turn you can quit and take all of the bells that you have already collected.

Besides choosing to end your turn, your turn can end in two other ways.

If your turn ends for either of these reasons, you will return all of the bells you collected this turn to the gameboard.

After your turn ends play will pass to the next player clockwise.

The first player to collect all ten of the bells of their color wins the game.

My Thoughts on Bellz!

Bellz! is the type of game that doesn’t really hide what it is trying to be. The game can honestly be summed up in just a couple sentences. You are given a magnet which you use to try to pick up the bells of your own color. Don’t pick up any bells of another color though or you will lose all of the bells you had already collected that turn. That is basically all there is to the game. Bellz! is a pretty basic dexterity game that gets right to the point.

While I have played quite a few different dexterity games including some similar to Bellz!, I was still interested in trying out Bellz!. I generally like these type of dexterity games. In particular board games that utilize magnets are always intriguing as it is a component that I think is underutilized in board games. The concept of collecting all of the objects of your color isn’t particularly original, but having to do so with a magnet is an interesting twist. The game also has a risk reward element. The more bells you can pick up on a turn gets you closer to winning the game. You can’t try to pick up too many bells though or you will lose everything you have gained on your current turn. I knew Bellz! was never going to be a great game, but I thought it was still going to be enjoyable. While I had a little fun with Bellz!, it left me disappointed.

I think the biggest problem with the game is that it just gets repetitive after a while. Trying to manipulate the positioning of the bells with the magnet is kind of fun. Unfortunately after a while, due to things that I will discuss shortly, it ends up just being the same thing over and over again. I had a little fun with Bellz! and would play it if someone asked, but it is the type of game that at max I would bring out occasionally for only a game or two. After that the game would start to get a little repetitive as you are doing the same thing on every turn in every game.

The main reason why I think the game becomes repetitive is the fact that the game relies on a lot more luck than you would expect from a dexterity game. The game does rely on some dexterity. You can’t just wave the magnet around and expect to win the game. You need to be careful with the magnet and pick and choose which bells to target. If you have a light touch you can possibly guide the bells with the magnet and move them away from other bells so they are easier to pick up. This seems to be a rare occurrence in the game though.

Instead it feels like a lot of the game is determined by what color you choose to collect at the beginning of the game. At first I thought it was kind of odd that all of the players don’t just choose a color before the game begins. I quickly realized that this decision has a lot more impact on the game than you would first assume. Which color you choose to collect can make all of the difference between winning and losing the game. The reason that the color you choose has such a big impact on the game is because you want a color where the bells are mostly separated from other colors. This makes turn order important as there will likely be one or two colors that are much easier to collect then others. The players that choose those colors will have a significant advantage in the game.

The reason that you want a color whose bells are separated from bells of another color is that it is really hard to get a bell away from another bell that it is touching or very close to on the gameboard. Theoretically you could use the magnet to gently move a bell away from another bell towards the magnet. In practice though this doesn’t really work. It doesn’t work because it is almost impossible to just attract one of the bells with the magnet when it is close to another bell. You likely will just pick up both of them. You will obviously try to separate them, but you likely will fail which hopefully will separate the bells for a future turn. For this reason it is really hard to get more than just a couple bells on any given turn. If the board is setup in a way where a player can get more than a couple bells in a turn, they have a very good chance of winning the game.

While the simplicity leads to the game becoming repetitive pretty quickly, it does make the game quite accessible. With how simple the game is you can probably teach it to new players within a minute. The game has a recommended age of 6+, but I think kids even younger could play the game as long as they don’t try to put the bells in their mouth. As each player has to only collect ten bells, it is not surprising that the game plays pretty quickly. I would guess that most games will take 10-15 minutes. With how easy the game is to transport it should also work well in travel situations.

The simple rules do lead to the need to create your own house rules though. The game’s rules never really clarify what constitutes you picking up a bell of another color. You could interpret this in a couple different ways. Is a bell picked up as soon as it attaches to one of the bells attached to the magnet, or do you need to actually lift it off the gameboard for it to count? If all of the players agree on what constitutes a bell being picked up this shouldn’t really be an issue. I honestly don’t know what is the best way to handle this issue. It kind of feels like cheating if you don’t count a bell as picked up until it leaves the gameboard. Interpreting the rule in this way though allows players the opportunity to try to get bells off the magnet which could add a little skill to the game.

Before wrapping up I want to quickly talk about the game’s components. For the most part I found the quality to be a little mixed. On the positive side I want to begin with the gameboard. I thought it was pretty clever that the bag that stores the components is also the gameboard. This allows the game to be ultra portable. It does lead to the board being curled though which leads to the bells sticking by one another. The magnet is pretty well made and is strong enough to pick up the bells. The bells are colorful but are pretty average.

Should You Buy Bellz!?

At the end of the day Bellz! didn’t meet my expectations. The concept while not highly original was interesting and was the type of game that I generally enjoy. The game is also really easy to play, plays quickly, and travels easily. I never thought Bellz! was going to be a great game, but I thought it would be a solid to good game. Unfortunately Bellz! disappointed in my opinion. While the gameplay is kind of fun, it gets repetitive pretty quickly. The game has some skill as you try to manipulate the bells with the magnet, but it generally relies even more on luck. What color you choose at the beginning of the game will have a pretty big impact on who will win the game. The problem comes from bells of different colors that touch each other on the gameboard. Good luck being able to separate them as you likely will have to sacrifice a turn just to separate bells that are touching.

As far as recommendations for Bellz! it kind of depends. If the concept doesn’t interest you at all, I doubt you will like Bellz!. If the concept sounds interesting to you though, you may or may not like the game. I found the game to be pretty average, but you might like it more than I did. For this reason I would only consider recommending Bellz! if you can get a good deal on it.

If you would like to purchase Bellz! you can find it online: Amazon

2 thoughts on “Bellz! Board Game Review and Rules”