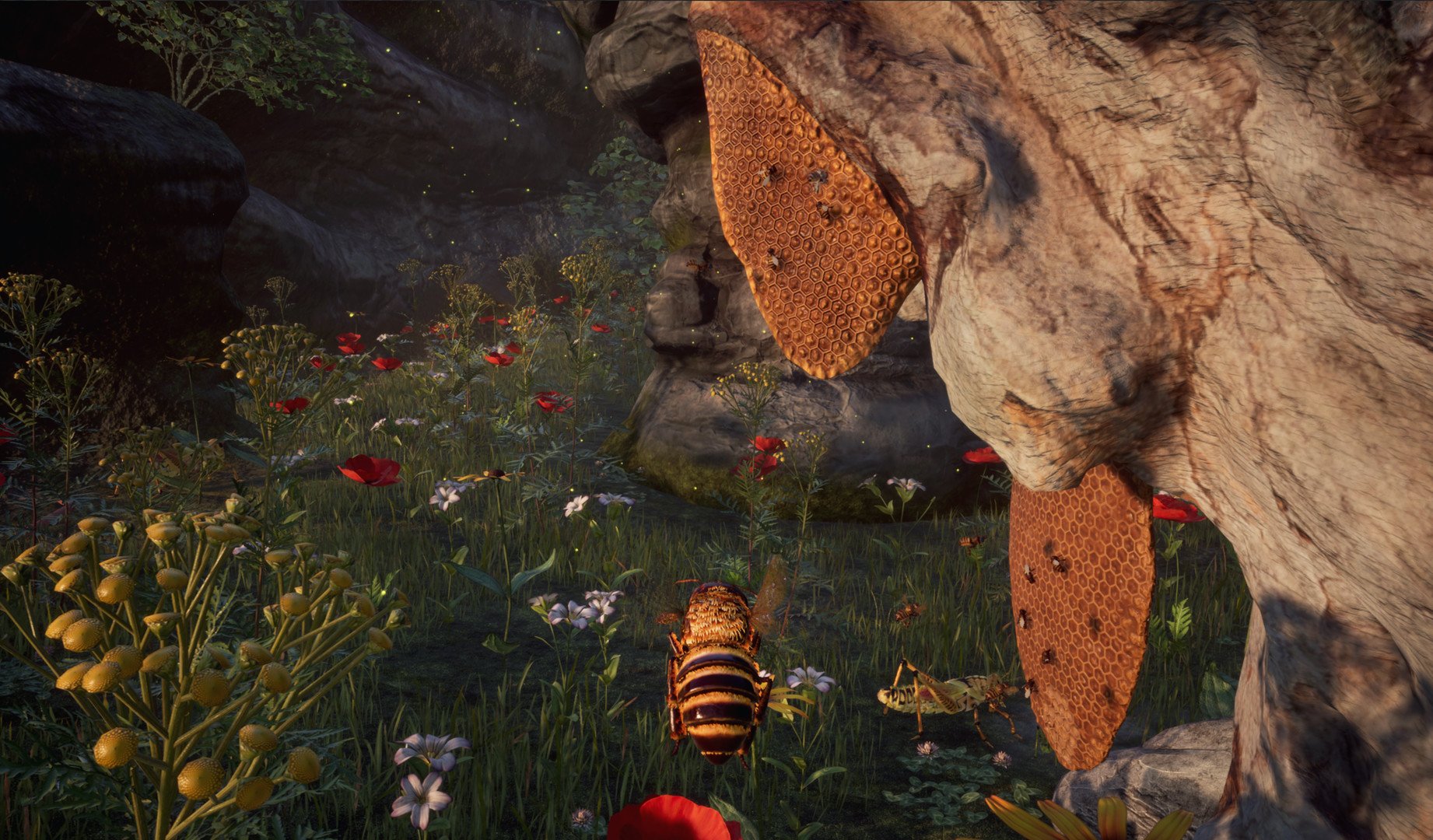 I have been a big fan of the indie video game scene for long time. While indie game studios don’t have the large budgets and staffs working on them, they have one thing going for them that large game studios don’t have. As they don’t have as much money invested in each game they are free to take more chances. I applaud this as I am a fan of games that actually try something original. This brings me to the game that I am looking at today Bee Simulator. Bee Simulator is the type of game that a AAA studio would never touch since you play as a bee. While I don’t have a lot of interest in bees in general, I thought the premise was quite interesting so I wanted to check it out. Bee Simulator is an interesting and unique experience that children and people who like relaxing games should enjoy even though it has some significant issues.

In Bee Simulator you play as a newborn bee. As you adjust to your surroundings you are tasked with completing your general duties. One day as you are out collecting pollen for the swarm you see humans around the tree that your hive is built in. In turns out that your tree is being prepared to be cut down by the humans. In addition to preparing for the upcoming winter your swarm needs to find a new location for the hive that will keep your swarm safe from predators and the environment. As a little bee in a big world will you be able to save the day and be the hero your swarm needs?

Bee Simulator is one of those games whose gameplay is hard to describe as it doesn’t fit neatly into your typical video game genres. This was actually one of the reasons that I was intrigued by Bee Simulator as I like games that try to do something new. The easiest way to describe the game is that just as the tile implies you play as a bee. This involves a lot of flying around and collecting various types of pollen. Flying around is pretty simple as you either use one of the analog sticks to control movement or you can use the buttons dedicated to raising and lowering your character in the air. The flying mechanics are similar to most other games that feature some sort of flying mechanic.

For the most part I enjoyed the flying mechanics of Bee Simulator. This aspect of the game is quite relaxing as you can take your time and fly wherever you would like. The controls work well most of the time as you should be able to pick them up right away. The only issues with the flying is that you will occasionally run into objects which sometimes leads to some strange physics as you try to regain a normal flight pattern. Flying in Bee Simulator is pretty relaxing as there is no existential threats in the game. Unless I missed them entirely there is no way to die in the game. You can fly around and enjoy exploring without having to worry about dying or running out of time. If you ever fail a challenge you can just try again without losing any progress. People who are looking for a game that you can just sit back and enjoy while relaxing should enjoy this aspect of the game.

I would say that a majority of the game involves flying around picking up pollen and exploring. Bee Simulator also features some mini-games and side quests that you will encounter while exploring. These different mini-games feature various tasks that bees have to complete. One mini-game involves collecting a certain amount of pollen of a particular variety which can be seen by turning on “bee vision”. You can compete in races where you chase after another bee through different colored rings. There is a dance challenge which is pretty much a basic memory game where you have to repeat back the moves that another bee performs. Sometimes you will have to fly to an item to pick it up and then take it to another area. Finally there is a mini-game where you fight off adversaries. This is basically a quick time mini-game where you have to press buttons at certain times in order to block and attack the enemy.

I found the mini-games to be a little hit or miss. I had some fun with them as they are pretty simple to play and are short enough to keep your interest. Each mini-game you complete also rewards you with knowledge points that can be used to unlock various collectibles which gives you a reason to complete all of them. I could see children getting quite a bit of enjoyment out of them. The problem is that none of these mechanics are particularly original as they are pretty basic mini-games. While they can be kind of fun in short doses, they can become a little repetitive after a while.

Heading into Bee Simulator I didn’t know exactly what the target demo for the game was going to be as it could have been made for children or adults. After playing through the main story and a decent amount of the side quests and mini games I would say that Bee Simulator was mostly made for children and adults that are interested in a relaxing experience. I say this for a couple reasons. First the whole direction the game takes seems to be gauged towards children. The game’s story is cute and a little quirky at times. The game’s story felt like I was playing through the plot of a children’s movie. The game is also quite educational. I was actually surprised by this as it was more educational that I thought and it does it in a way different than your typical educational game. I am far from an expert on bees, but I genuinely learned some things about bees by playing through the game.

The other reason why I would say that Bee Simulator is mostly for children is that the game is quite easy. As I said before it doesn’t appear like you can die in Bee Simulator. You can occasionally fail challenges but that is it. I rarely failed challenges as they are usually really easy. The only challenge that has any real difficulty is some of the races. This is due to the occasional strange physics when you run into objects where it takes time to recover which sometimes is enough to fail the challenge. In addition to the easy challenges the game also holds your hand throughout the story. The game gives you an indicator that always points to your next destination. Therefore you don’t have to do any exploring or figuring things out yourself as the game just tells you what you have to do next.

Bee Simulator basically consists of two different modes. First there is the single player mode. This involves the story missions as well as a lot of side missions and challenges that you can complete to unlock collectibles. Then there is the co-op experience. As a fan of co-op games I was a little disappointed by this aspect of the game. The co-op mode barely differentiates itself from the single player mode. Basically in the co-op mode you choose a map to play on. The map has various challenges set up that you can complete along with collecting pollen. While the co-op mode handles the two players fine, having two players play at the same time doesn’t add much to the experience. There really is no cooperation as there are no unique challenges that require the two players to work together. Basically the only interaction in the co-op mode is that the players can compete in some of the challenges to see who can complete them first. Outside of having a few new maps to explore the co-op experience doesn’t add much to the game. I found the single player experience to be more satisfying than the multiplayer.

This is a shame because Bee Simulator unfortunately doesn’t have as much content as you would expect. How much time you ultimately get out of the game is going to depend on what type of player you are. If you do the bare minimum focusing only on the story missions you could probably beat the entire story in around 2-3 hours. There are a decent amount of side missions and challenges to complete which should add a few hours to the game. You could also probably add a few hours if you check out the co-op maps. Unfortunately I don’t see anyone getting a lot of time out of Bee Simulator unless they explore every nook and cranny, complete every challenge, play all of the multiplayer maps, and even play through the game a second time. The length is disappointing but it gets worse when you factor in that the game retails for $40. For the amount of gameplay you get out of Bee Simulator I don’t think it is worth its full price. I would say that it is probably better to wait for a sale on the game.

I ultimately have some mixed feelings about Bee Simulator. There are some things that I liked about the game, but there are some issues as well. The reason that I was initially intrigued by Bee Simulator is that it was an interesting idea. I appreciate when games do something unique and Bee Simulator succeeds in this regard. Bee Simulator is a unique experience that can be quite relaxing. Flying around as a bee and exploring is fun. The mini-games can be a little hit or miss though as they can be kind of fun but become repetitive rather quickly. The game is also quite easy where it seems to have been made more for children than adults. I think children could really enjoy Bee Simulator due to the charming atmosphere and the game even does a good job of being educational while remaining entertaining. The problem with the game being so simple is that it is quite short. You could finish the main story in just a couple hours with the side quests and challenges adding in a few more hours.

My recommendation for Bee Simulator comes down to your feelings about the premise. If the gameplay doesn’t sound all that interesting to you or you want a challenge Bee Simulator probably won’t be for you. If you have younger children or are a fan of more laid back games I could see you having fun with Bee Simulator. Due to the length though I would probably recommend waiting for a sale.