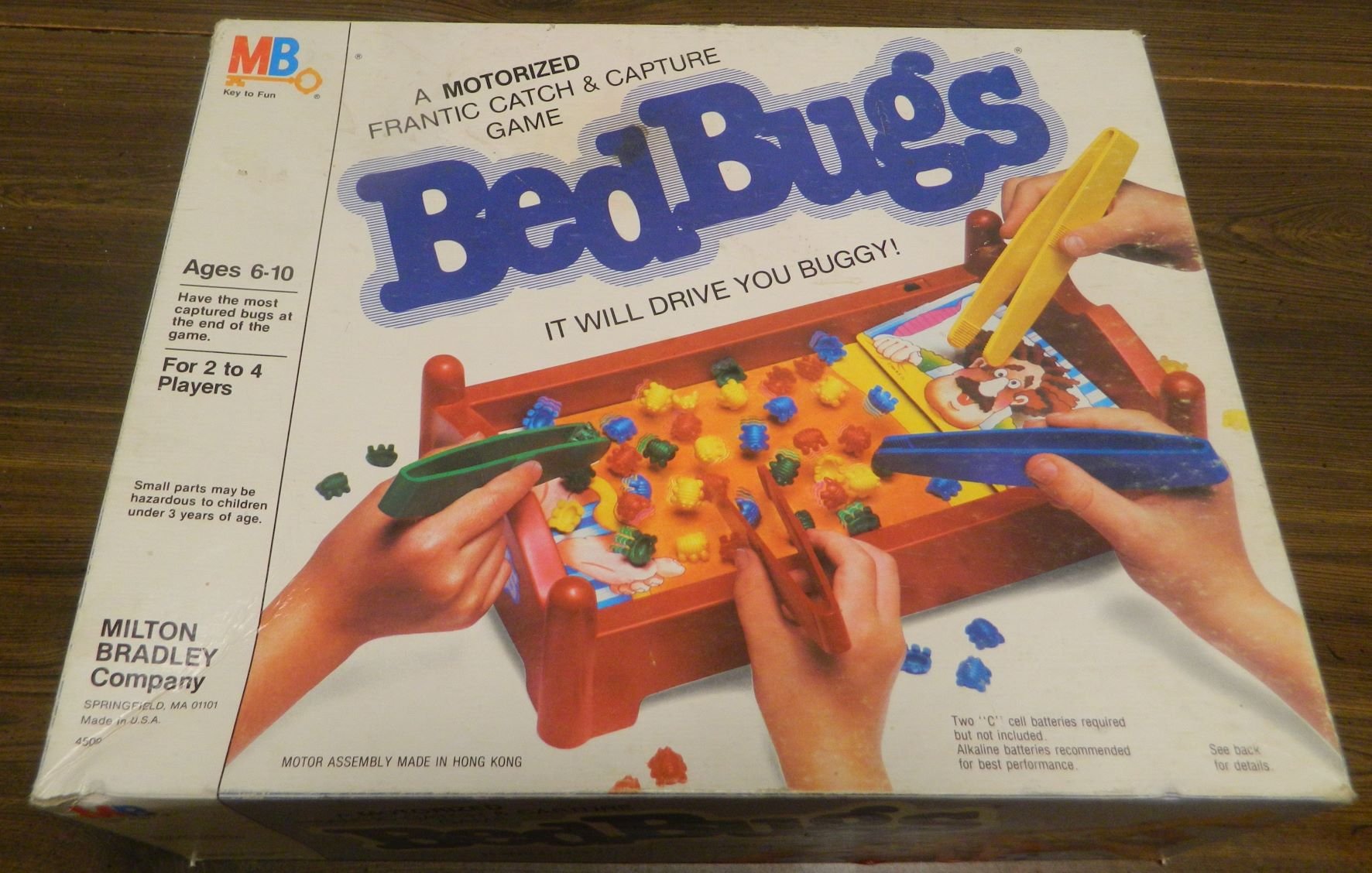 Having played so many different board games in the past I have encountered quite a few different themes. Some themes are really good and some are pretty bad. Then there is the occasional theme that is just plain strange. Today’s game is one of the later category as it is about exactly what the title implies, bed bugs. Who decided it was a good idea to make a children’s board game centered around bed bugs. Coming out in 1985 a couple years before I was born, I never really heard about the game until I started to see it a lot as I got into thrift shopping. Bed Bugs is one of those games that I have regularly found at thrift stores and never really gave a second thought as it looked like a very generic children’s game. I decided to finally try out the game though after I found it for $1. Bed Bugs is a children’s game at heart but due to the game being quite a bit more challenging than you would expect I found it to be a pleasant surprise.

How to Play Bed Bugs

When all of the players are ready the youngest player will flip the switch. They will then call out one of the four bug colors and the game begins.

As the bed begins to shake and the bugs move around the bed, all of the players will try to grab bugs of the chosen color with their tongs. When a player picks up a bug they will put it in front of themselves.

All of the players will count up how many bugs they collected during the game. The player who collected the most bugs will win the game.

My Thoughts on Bed Bugs

For a long time I passed on Bed Bugs when I saw it at thrift stores/rummage sales as I expected it to be another basic children’s game. There have been quite a few children’s games made in the past that basically boil down to using tweezers, your hands or some other type of gadget to pick up other objects. While these type of games can be fun at times, once you have played one of them it feels like you have played all of them. Just looking at Bed Bugs it looked like another one of these games. In action that is exactly what Bed Bugs is and yet it is quite a bit better than I expected it to be.

Bed Bugs is far from a great game but I have to admit that I enjoyed the game more than I was expecting. I think this is due to the game being quite a bit more challenging than I was expecting. Generally when a game has an upper age limit it usually means that the game is quite simple and too basic to be enjoyable by anyone other than young children. Bed Bugs can be pretty challenging though mostly because the shaking bed does a lot more than I expected it to. I thought the shaking bed would just slightly move the bugs around. I was definitely surprised when I turned on the bed though. The bed shakes a lot more than I could have imagined. This leads to the bugs moving around the bed a lot and sometimes even jumping into the air.

With the bugs being quite a bit more energetic than I was expecting it leads to it being harder than you would expect to pick them up. Between the size of your tweezers and the size of the bugs it is hard to pick up the bugs at times. With the bugs constantly moving it is hard to pin them down long enough to pick them up. You aren’t alone either as all of the players are competing for the same bugs. This leads to the game being quite a bit more competitive that you would expect. When a new color is called out the game isn’t super competitive as players can go after different bugs. As the number of bugs of a color starts to shrink though the competition becomes quite a bit fiercer. If there are several players competing for one or two bugs it becomes hard to catch the bugs as players will get in each other’s way trying to box the other players out as they try to secure the bug. Some players can become pretty aggressive which might lead to some issues, but this competitiveness makes Bed Bugs more exciting for adults than I would have expected.

While it might be a little harder to pick up bugs than I expected, Bed Bugs is still a really simple game to play. You could honestly teach the game to new players within a minute as there are only a couple rules and they are really obvious. This is not surprising as the game was designed for children ages 6-10. Due to the game’s simplicity and the fact that it doesn’t take that long to catch the bugs, games also play really quickly. I would expect that you could finish most games within five minutes. This short length will probably appeal to younger children and will also make it easy to play multiple games back to back.

Heading into Bed Bugs I can’t say that I had high expectations for the game as I thought it would be mostly for children. After playing it though I have to say that I was pleasantly surprised by the game as adults as well as children can have fun with the game. The game is clearly not going to be for all adults, but adults who are children at heart who generally like these types of children’s games can have some fun with the game. The game is far from deep but it is surprisingly fun trying to catch the bugs. Due to the game’s simplicity though it is one of those games that you will play for 15-20 minutes and then put it away for some time before you bring it out again.

While the game can become kind of repetitive, the biggest problem with Bed Bugs is an issue that it shares with a lot of other games in this genre of children’s games. The fact that the bed shakes more than I expected did a good making the game more challenging. At the same time though it also leads to the bugs flying everywhere. Bugs will semi-regularly jump out of the bed onto the table or onto the floor. If you don’t grab a bug just right with your tongs when you squeeze them it can shoot the bugs across the room. For this reason I would highly recommend playing the game in a room where there are not a lot of nooks and crannies that the bugs can fly into making them hard to find. It sometimes took longer to find all of the bugs that fell off the table as it did to play the game. For this reason I think it will be pretty easy to loose bugs if you don’t pay attention to where they fly off the table.

While I had never heard of Bed Bugs outside of seeing it quite a bit at thrift stores and rummage sales, the game must have had enough of a fanbase that the game was re-released 25 years after its initial release. A version was released by Patch Products in 2010 and there was another version released by Cardinal and Hasbro in 2013. There is even a more recent version of the game that was released by Hasbro. As I have access to both the 1985 and 2013 versions of the game I decided to compare them. For the most part the components are really similar. The bugs are basically the same. The tongs in the 2013 version are a little smaller than the original version. The biggest changes come from the bed itself. The first change is that the cardboard pieces from the original have been replaced with a plastic cardboard. This doesn’t seem to impact the game a lot as the bugs seem to move around about the same as the original version. The bed in the new version is also about an inch to an inch and a half shorter than the old bed. I am not sure how much of difference this would make on the game. While there are differences between the two versions I don’t think they are significant enough to recommend one version over another.

On the topic of the components I would say that they are solid. Both versions of the game mostly rely on a lot of plastic components. The beds do a good job shaking the bugs making them considerably harder to pick up. While I don’t like that the bed is smaller I think the newer version’s bed is better as the sheets and headrest in particular seem more durable and less prone to creases. Both beds are quite loud though. This is likely due to how fast the engines spin in order to shake the bed. For this reason the older version of the game apparently goes through batteries pretty quickly. The little plastic bugs are kind of cute and are durable enough. Due to their small size though they can fly all over the place. For the most part the components are quite solid and are what you would expect from a 1980s Milton Bradley game.

Should You Buy Bed Bugs?

Bed Bugs is a good example of it never being a great idea to judge a board game based on its box. I honestly didn’t have high expectations for the game as it just felt like another really generic children’s action/dexterity game. While the game’s concept doesn’t really distinguish itself much from other games in the genre, Bed Bugs actually surprised me. This is mostly due to it being quite a bit more fun catching the bugs than I expected. I thought the bed was just going to slightly move the bugs around but the bed shakes a lot meaning the bugs are regularly moving around and sometimes even jumping into the air. This makes the game quite a bit more challenging than I expected which makes the game more enjoyable. While children will probably enjoy the game more, adults can have more fun with it than you would expect. Bed Bugs is the type of game you play for 15-20 minutes and then put it away for another day. The biggest problem with Bed Bugs is that you have to spend quite a bit of time picking up the bugs that have fallen off the table.

My recommendation for Bed Bugs depends on whether you have younger children or if you like these type of children’s action/dexterity games. If you don’t have young children and generally hate these type of games, Bed Bugs is probably not going to be for you. Parents with younger children should consider picking up the game as their kids should enjoy it and they might even get more enjoyment out of it than they expect. Finally if you don’t have any young children but are a kid at heart that likes these type of games, I think you could have some fun with Bed Bugs. If you can get a good deal on it I would probably recommend picking up Bed Bugs.

If you would like to purchase Bed Bugs you can find it online: Amazon (1985 Milton Bradley)