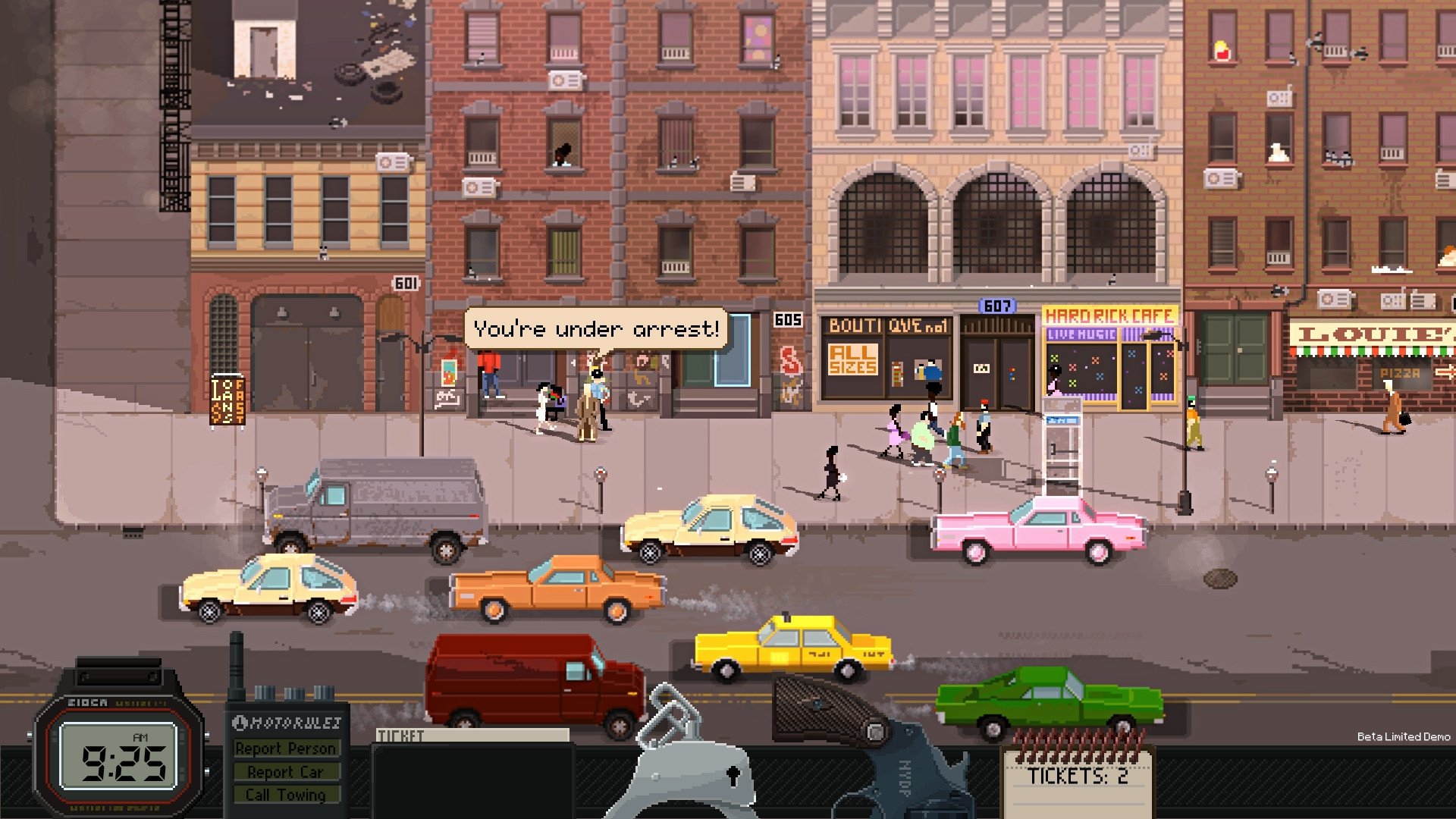 Originally released on PC almost two years, Beat Cop has finally made its way to consoles. Starting today Beat Cop is now available on Nintendo Switch, Playstation 4, and Xbox One. I never had the opportunity to check out Beat Cop on PC so I took this opportunity to try out the game on Playstation 4. What intrigued me about Beat Cop is that it had an interesting concept. There have been quite a few video games that have had you play as a cop. Most of these games involve you chasing down criminals and getting into shootouts. What was interesting about Beat Cop is that instead of a bunch of action sequences, the game seemed to focus more on the normal everyday tasks of being a cop like writing tickets. This might not sound all that interesting to some people but I thought it was unique and I always appreciate a video game that tries something new and original. Beat Cop tries to recreate the style of a gritty 80s cop drama and succeeds at creating a fun and interesting experience that occasionally goes a little too far.

In Beat Cop you play as Jack Kelly. Jack Kelly was a detective until everything went wrong. One day Jack is called to investigate a home burglary. While investigating Jack ends up killing the intruder. As valuable jewels have gone missing from the residence, Jack is suspected of taking them. While the case is being investigated, Jack is demoted to beat cop and is forced to patrol a Brooklyn neighborhood as he tries to figure out what happened and who is framing him. As a beat cop Jack’s new daily duties involve handing out tickets, arresting pedestrians who break the law, and trying to keep the peace between the mob and the local gang who are fighting for control of the neighborhood. Will you do your job and eventually clear your name or will you decide to join the mob/gang?

Beat Cop is one of those games where it is not exactly easy to describe the gameplay as it doesn’t fit firmly into any of your traditional video game genres. Beat Cop is a game that is played over the course of 21 days. Each day brings new challenges that you must face. A challenge you will have to complete every day is giving out a certain number of tickets. You have to always be on the lookout for cars that have a parking violation, broken lights or worn out tires. Each day certain types of tickets will be emphasized and you will have to find citizens breaking those specific laws. When you spot a car violating the emphasized law(s) for the day, you must note which rule was violated and give the car the proper ticket. In order to stay in the cops good graces you need to meet your daily quota of tickets. Writing out double the required number of tickets will even earn you a financial bonus.

In addition to writing tickets, you will get calls from the police station throughout the day as well as encounter various people/events on the streets. These tasks can vary quite a bit but they mostly involve vising different parts of your neighborhood and choosing how you will approach the situation. As you don’t have an unlimited amount of time, you can’t complete every objective you are presented with. Therefore you have to prioritize which events you want to deal with and which you are going to ignore. Some of these events are tied to the main story and you must complete them in order to progress the story. Other events can raise or lower your reputation with the police, the mob, and the gang depending on how you choose to handle them. Raising your reputation earns you favor with the group while a negative reputation can turn that faction against you leading to some bad consequences.

While it defies traditional video game genres, I liked Beat Cop’s gameplay. The gameplay is pretty simple. On most days you are switching between finding cars that need to be ticketed and performing various fetch quests. This might sound like it would get kind of repetitive but for some reason it doesn’t. I think this is mostly because the game does a really good job mixing things up. You will be doing the same types of things each day but the game does a really good job using the story/theme in order to make each day feel unique. No two days feel the same as there are always some unexpected events that keep each day interesting. The limited amount of time you have to complete tasks also keeps you busy as you don’t have time to sit around. There is also something surprisingly satisfying about finding the cars that need to be ticketed.

Generally I like that the game is open ended. The game forces you to do very little. Want to ignore writing tickets? The game doesn’t force you to and will only dock your pay and you might eventually be fired. Want to join the mob or gang? You can do that as well. You can even choose to ignore the main story in its entirety. This gives the game a little replay value as you are unlikely to see everything in one playthrough.

The one issue I had with this open ended gameplay though is that you could end up missing out on the main story without even noticing. Miss an important event earlier in the game and you will miss out on the main story for the rest of the game. The game is not forgiving at all in this area. So if you are interested in the main story at all, you need to make sure that you complete all of these objectives. The good news is that Beat Cop is nice enough to let you rewind to any previous day in order to try and complete any objectives that you missed.

As Beat Cop is trying to simulate gritty 80’s cop dramas, it is not surprising that the game received a mature rating. Simply put the game is not for children. The game is filled with swearing, drug content, prostitution/porn, pixelated violence, and other adult content. You could even argue that the game has some sexism and racism mixed in as well. It seems like all of this was done to try and recreate the gritty cop TV shows/movies from the 1980s. As I haven’t seen a lot of these movies, I can’t say how good of job the game does recreating the cop movies of the era. I will say that I think the game takes it a little too far at times. I think the game could have toned down some things and it wouldn’t have impacted the game. While the adult content didn’t turn me off from playing the game, I know it will for some players.

Other than Beat Cop going a little too far at times, I think the story/atmosphere is pretty good. The overall story is somewhat generic as it tends to follow your generic corruption storyline but it is interesting enough that you want to see what happens. Outside of the main story, Beat Cop is a game that is not afraid to use pop culture references. This includes references to things that happened after the 1980s. These little Easter eggs are fun to find when you encounter them. While the game is pretty serious for the most part, the game is not afraid to go off the deep end from time to time. Supplementing the overall atmosphere is the pixel artwork which is well done. The pixel art is not going to change someone’s mind who hates pixel art but I think it shows a surprisingly level of detail.

I never played the PC version of Beat Cop so I can’t directly compare it to the Playstation 4 version of the game. Generally speaking I think the developers did a good job porting Beat Cop to consoles. The game does a good job assigning each task to different buttons. The controls aren’t going to get in your way as they are easy to use and work well. The only issue I had with the controls is that the game doesn’t always register when you are trying to select a car/person. For example I would walk over to a car and get close enough that the car would be highlighted. I was usually able to select the car with no issues but there were occasional instances where I couldn’t select the car. To fix the situation I had to slightly adjust my position and try again. This is not a huge problem but it does cost you a few seconds here and there.

Beat Cop’s length is going to somewhat vary based on how you choose to play the game. As I mentioned above, Beat Cop has a total of 21 days to play through. Most days will take between 15-30 minutes to complete. If you just play through all of the days without replaying any, I would guess that it would take most people around 7-8 hours to complete the game. The game could take longer if you decide to rewind some days. Beat Cop is set up as a game where you can’t do everything in one playthrough. As you can’t please the police, the mob, and the gang; you need to make some decisions which will block off the possibility of taking other actions in the game. To see everything in the game you will have to play the game a couple times. I think you can see most of the game in one playthrough though if you use your time well. For this reason I don’t know if I would play the game a second time. With the game retailing for $15, getting seven to eight hours is not bad and even better if you play through the game a second or third time.

Overall I enjoyed my time with Beat Cop. The game has some really interesting ideas that I haven’t seen pursued in other video games. Instead of playing as a top notch detective or a cop that gets into a surprising high number of action sequences, you play as a typical cop whose main job is writing tickets and helping citizens. The gameplay is pretty basic and is repeated throughout the game. You would think this would getting boring after a while but the game does a good job mixing things up where each day feels unique. There is also something surprisingly satisfying about the gameplay. While Beat Cop does a pretty good job recreating your typical gritty 80s cop drama, the game does go too far at times where the game is only suitable for adult audiences. Beat Cop has a decent length for this type of game, but it doesn’t have as much replay value as I would have expected.

Beat Cop is a good game but I don’t think it will be for everyone. Due to the game’s content, it is only for adults. Otherwise your enjoyment is mostly going to come down to if you think the premise is interesting. If the game doesn’t sound that interesting to you, it probably won’t be for you. People who think the idea of working as a beat cop sounds interesting though, should have fun with Beat Cop and I would recommend that they pick it up.