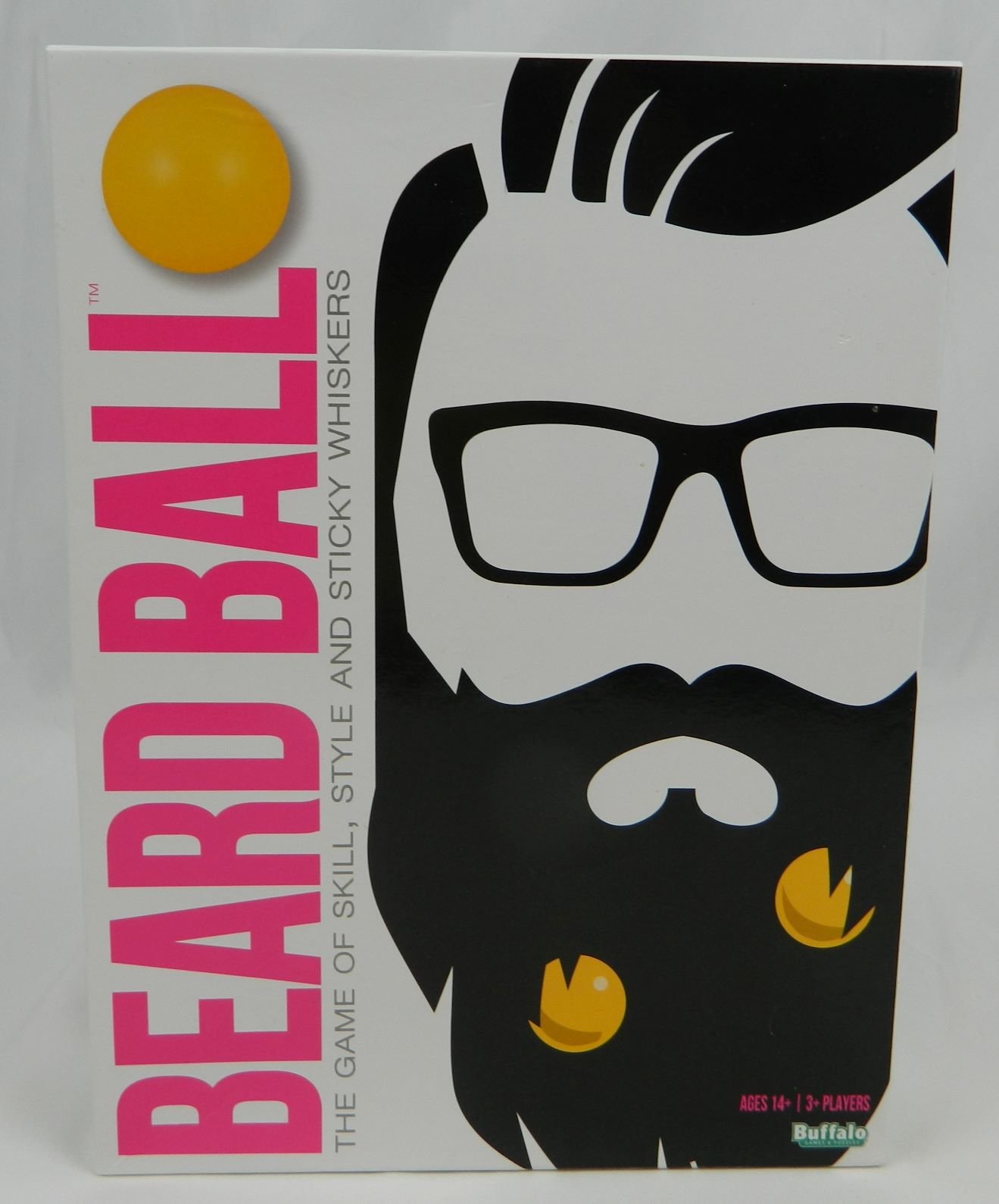 As a fan of silly board games, I was intrigued when I first saw Beard Ball. The premise of the game is simple as you throw balls with velcro on them towards other players who are wearing fake felt beards. In some ways this sounded kind of dumb, and yet kind of fun at the same time. When I found it for less than $1 at a rummage sale I thought how could I go wrong. Beard Ball is an interesting game as it finds a way to be both fun and kind of stupid at the same time.

How to Play Beard Ball

To begin your team’s turn you will choose who will toss the ball and who will wear the beard and glasses to try and catch the ball. If you aren’t playing with a teammate you will choose another player to be your partner for this turn and which role each player will take.

If there isn’t a card on each of the three spaces on the board, draw a new card to fill in the empty spot. You will then roll the die to determine what card and beard will be used for this round. Attach the corresponding beard type to the glasses. The player who will be wearing the beard will then put on the glasses.

The player chosen to throw the ball will then throw the ball towards the player wearing the beard following the rules listed on the card. Some additional rules that must be followed while attempting a stunt are as follows:

If one or more balls stick to the beard, the team has successfully completed the stunt (unless the card says otherwise). The team/both players will receive points equal to the number of points displayed on the card. If the players fail to complete the stunt, they will receive no points this turn.

The first player/team to earn eleven or more points will win the game.

My Thoughts on Beard Ball

The premise of Beard Ball couldn’t be much simpler. One player wears a fake beard while the other player throws balls with velcro at them hoping to get them to stick. This is complicated a little by players having to throw or catch the ball in a unique way each round which makes the game a little more interesting/challenging. Basically the game is a silly dexterity/action game.

I have conflicted feelings towards Beard Ball. There were some things that I liked, and others that were pretty stupid. While the game is far from deep, I generally liked the premise behind the game. There is something oddly satisfying about throwing balls at a fake beard hoping that they will end up sticking. The gameplay is really simple where it can be taught to new players within minutes. It also plays quickly as unless players really struggle I would think most games would end within 20-30 minutes. You thoughts on the premise are likely going to be a big driving force behind whether you will like the game. If the game sounds stupid to you, I would be surprised if you actually enjoyed it. If the premise is at least somewhat interesting to you though, I think there is enough to the game where you should at least continue reading.

I think the cards are both the game’s greatest strength and weakness. The various challenges on the cards basically make and break the game. Throwing the ball at the fake beard is fun for a while, but the game would become stale quickly without the cards. The cards can be pretty hit or miss. The cards basically change how far or how you can throw the balls. Others impact the positioning of both players. Some of these challenges were pretty fun as they add little twists to each round to keep the gameplay fresh.

The problem is that for each good challenge, there is another that is kind of dumb. I think a lot of this come from being silly just to be silly. Some of the challenges will make you look silly so to enjoy the game you need to not care if you make a fool out of yourself. A decent number of these challenges also force you to get up and move around a lot. In particular some of the stunts will be hard for players to complete if they have some sort of physical limitation.

The cards also can be hit or miss when it comes to their difficulty versus the amount of points they give players. Not all of the cards are equal as some are more challenging than others. The game tries to deal with this by having different point values on some of the cards. At times this works well, but there is definitely some inconsistency in this area. Some cards are actually pretty easy and are worth more points than they probably should have been. Other cards are much more difficult than the number of points that they are worth. This introduces some luck to the game as all of the stunts were not created equally. The team that gets a better group of stunts to try and complete will have an advantage in the game.

Ultimately I am kind of confused about what type of audience that the publishers of Beard Ball were trying to attract to the game. The game has a recommended age of 14+ which most would assume means that the game is meant more for teens and adults. While I could see the game working well for teens and younger adults (high schoolers/college kids in particular), I think the game is too silly for most people older than that. The game feels like a party game. At the same time I don’t necessarily agree with the game’s age recommendation as I think younger children would also really like the game. Younger children may need some help reading the cards and figuring out what they are supposed to do, but I really don’t see anything about the game that would warrant a 14+ rating.

As for the components I was actually a little surprised. This was mostly due to the velcro balls sticking to the beards a lot better than I was expecting. Basically if you throw a ball and it hits the beard it will likely stick to it. Rarely if ever did the balls fall off one of the beards due to the velcro not sticking. Otherwise the components are pretty much what you would expect. I kind of wish the game had more cards as the stunts will likely become repetitive after a while. The biggest problem with the components is that you have to keep switching the beards as the game only comes with one pair of glasses. You can just slip the beards on and off, but you spend almost as much time setting up for a round than you do playing it.

Should You Buy Beard Ball?

After playing Beard Ball I don’t exactly know what to think about the game. There were things that I liked, but the game can also be kind of stupid. The premise is really simple, and yet it is surprisingly fun trying to throw velcro balls at a fake beard hoping that they stick. Some of the challenges can be pretty fun as they keep the gameplay from becoming repetitive. The problem is that a lot of the challenges are kind of stupid where they feel like they were only added to make players look silly. Not all of the stunts were created equal either as some are more challenging than their point value would indicate.

Ultimately my recommendation comes down to your thoughts on the game’s premise. If the premise doesn’t sound all that interesting to you, there is nothing about the game that will change your mind. If Beard Ball sounds fun to you though and you can get a good deal on it, I think it might be worth picking up.