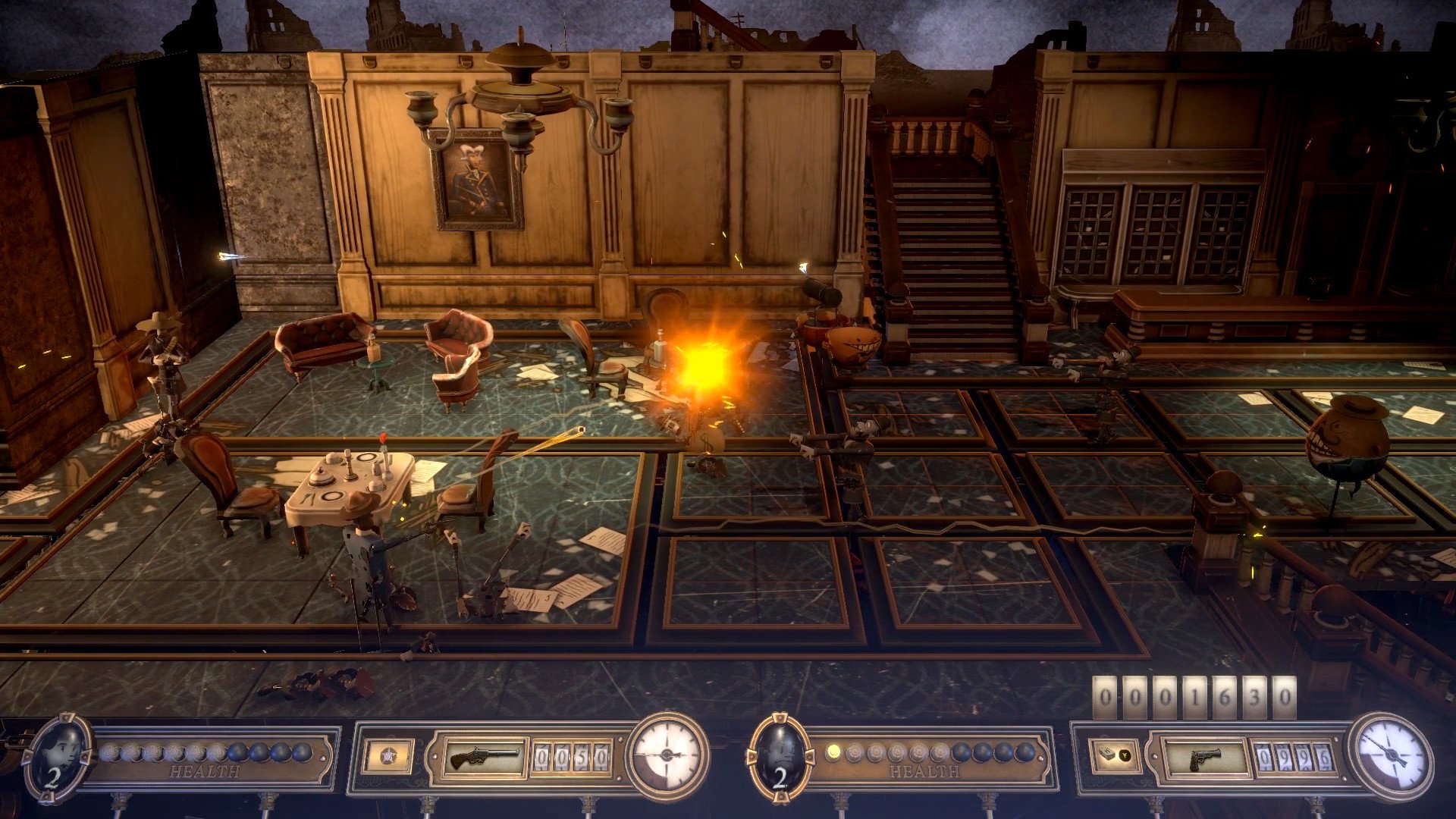 The twin stick shooter genre has a lot of fans. I don’t mind the genre, but I wouldn’t say that it is one of my favorites. That is one of the main reasons that I haven’t looked at many games from the genre in the past. Normally I wouldn’t give much thought to a new twin stick shooter, but when I saw Bartlow’s Dread Machine I knew that it was a game that I wanted to try out. The idea of utilizing an old timey shooting gallery theme with twin stick shooter mechanics was a genuinely unique idea that I haven’t seen before. Bartlow’s Dread Machine may only be in Early Access at this point, but it is on pace to being one of the most original games that I have played in a long time.

In Bartlow’s Dread Machine you play as a Secret Service agent in charge of protecting President Teddy Roosevelt. One day the President is kidnapped by a stranger with seemingly otherworldly powers. In order to rescue the President you must pursue the kidnapper fighting their otherworldly minions along the way. Your journey will take you from New York to the west coast. Can you free the President and stop the kidnapper before they are able to enact their evil plan?

I don’t think the comparison is perfect, but I would say that Bartlow’s Dread Machine mostly resembles a twin stick shooter. One analog stick controls movement while the other controls your aim. You have access to a rifle, a pistol, and a third weapon which can be a shotgun, machine gun, sniper rifle, among others. You have a limited number of bullets for each weapon which can be refilled by reaching ammo crates spread throughout the levels. The objective of each level is to avoid/kill all of the enemies that pop up along the way. There are melee enemies and enemies that use ranged weapons. To avoid enemy bullets you either have to dodge them or use the game’s evade button when they are about to hit you in order to reflect them away from you. Your character has a certain amount of health and when you run out you will lose one of your lives. Lose all three lives and you have to restart the level from the beginning.

So far this probably sounds like every other twin stick shooter. Where the game differentiates itself is the addition of the old timey shooting gallery mechanics. In the game you play as a character that is part of the shooting gallery. The game takes place on a scrolling landscape with tracks placed along it. As your character is part of the gallery you can only move along the tracks on the ground. In some areas there is only one piece of track to move along while others allow you to switch between tracks. All of the enemies in the game utilize these tracks as well. Melee units with have to follow these tracks to reach you giving you an idea of how they will move. The ranged units will move back and forth along a piece of track. While you can only move along the tracks, you can shoot in any direction which includes shooting enemies that are on other tracks. Most levels involves just shooting a bunch of enemies, but there are a few other special sections where you ride vehicles, solve puzzles, or have to deal with other obstacles.

As I mentioned at the beginning of this preview I have never been a huge fan of twin stick shooters. I can have fun with games from the genre, but I wouldn’t really consider it to be one of my favorites. That said I have really enjoyed Bartlow’s Dread Machine so far. While the game shares a lot in common with your typical twin stick shooter it feels different as well. I think this has to do with the game’s rail system. Due to these rails the game kind of feels like a hybrid between a 2D and 3D shooter. You can only move vertically or horizontally at any given moment switching between the two when you hit a junction. You can shoot in any direction though making it feel like a 3D top down shooter.

I think the main reason why the gameplay works is that it is just so satisfying. In many ways Bartlow’s Dread Machine already feels like a complete game outside of the number of levels currently in the game. The gameplay itself already feels really polished. I did encounter one bug during the second boss battle where I was able to move on a non-existent track. The only other issue I had with the gameplay is that is was sometimes a little hard to switch between tracks at a junction. Otherwise you wouldn’t even know that Bartlow’s Dread Machine is in Early Access. The controls are really simple and they work really well. The shooting is really satisfying. Between most of the enemies only taking one shot to kill and that satisfying old timey shooting gallery noise when you hit a target makes you feel really powerful. The gameplay should feel familiar to people who enjoy the twin stick shooter genre, but how the game utilizes the new mechanics that the shooting gallery theme introduces really make the game stand out.

So far I would say that Bartlow’s Dread Machine has found the right balance for difficulty. I wouldn’t say that the game is too easy or challenging. Some levels you will beat on your first attempt. I would say that a decent amount of levels will take at least two attempts to complete though. The game seems to be fair for the most part as you get three lives to complete a level and there are a fair number of health stations in each level. If you die you will get to start at your last checkpoint instead of having to restart from the beginning. Even when you run out of lives your death won’t be pointless as any money you collect during the level will be kept which allows you to buy new weapons or clothing to make your next run more successful. You will die, but it never feels like you have to grind just to power up your character to beat a level. I don’t know how the second half of the game is going to turn out, but I hope the game stays on a similar difficulty curve.

While the gameplay is satisfying I think the thing that brings the whole game together is the overall atmosphere. As I mentioned the gameplay takes place in what feels like an old timey shooting gallery. This isn’t just a gimmick as Bartlow’s Dread Machine fully embraces it. The game’s story really plays into its early 1900s theme. The game’s aesthetics seem to have taken a lot of inspiration from tin toys from that era. Its not just the aesthetics though as it also applies to the story and other aspects of the game. For example whenever you use a potion in the game it plays an old timey musical jingle. The story is only half complete at this point, but it is off to a good start as it blends historical elements with sci-fi. If you watch the trailer for Bartlow’s Dread Machine and it seems like it would be something that would interest you I would be genuinely surprised if you didn’t enjoy the game.

At this point Bartlow’s Dread Machine is in Early Access. The developers only plan on keeping the game in Early Access for two months though. This is mostly because the developers are using the process for balancing the gameplay and adding more levels. As I mentioned earlier I think the gameplay is already pretty polished. Outside of some minor tweaking I wouldn’t really change much with the gameplay. At this point the game has the levels from three of the six locations/worlds. I think there are either eleven or twelve levels in the game at this point. I would say that this should take most players around three hours to complete unless you spend time replaying the levels to get enough money to buy all of the clothing and weapons. The game might be a little short at this point, but the plan is to add another of the locations this month which includes another four levels.

Generally I don’t like to give numerical scores to games in Early Access. I do this for fairness as the game is not completed so it could get better or worse as it is further developed. If I were to give Bartlow’s Dread Machine a rating though it likely would be quite high at this point. Unless something really unexpected happens I expect Bartlow’s Dread Machine to become a very good game as it is already on pace to become one. The game may share a lot in common with your typical twin stick shooter, but it feels like a totally unique experience as well. This is due to the really interesting shooting gallery premise that the game is built around. This adds some twists to the gameplay and leads to some really satisfying gameplay. This is combined with a really interesting theme and story that really utilizes the game’s premise.

Basically if the premise behind Bartlow’s Dread Machine interests you at all I think you will really enjoy it. It doesn’t take a long time to play everything that the game has to offer at this point, but it is well on its way to being a great game. Bartlow’s Dread Machine is one of the most original games that I have played in a while and I can’t wait to see what the final version will have to offer.