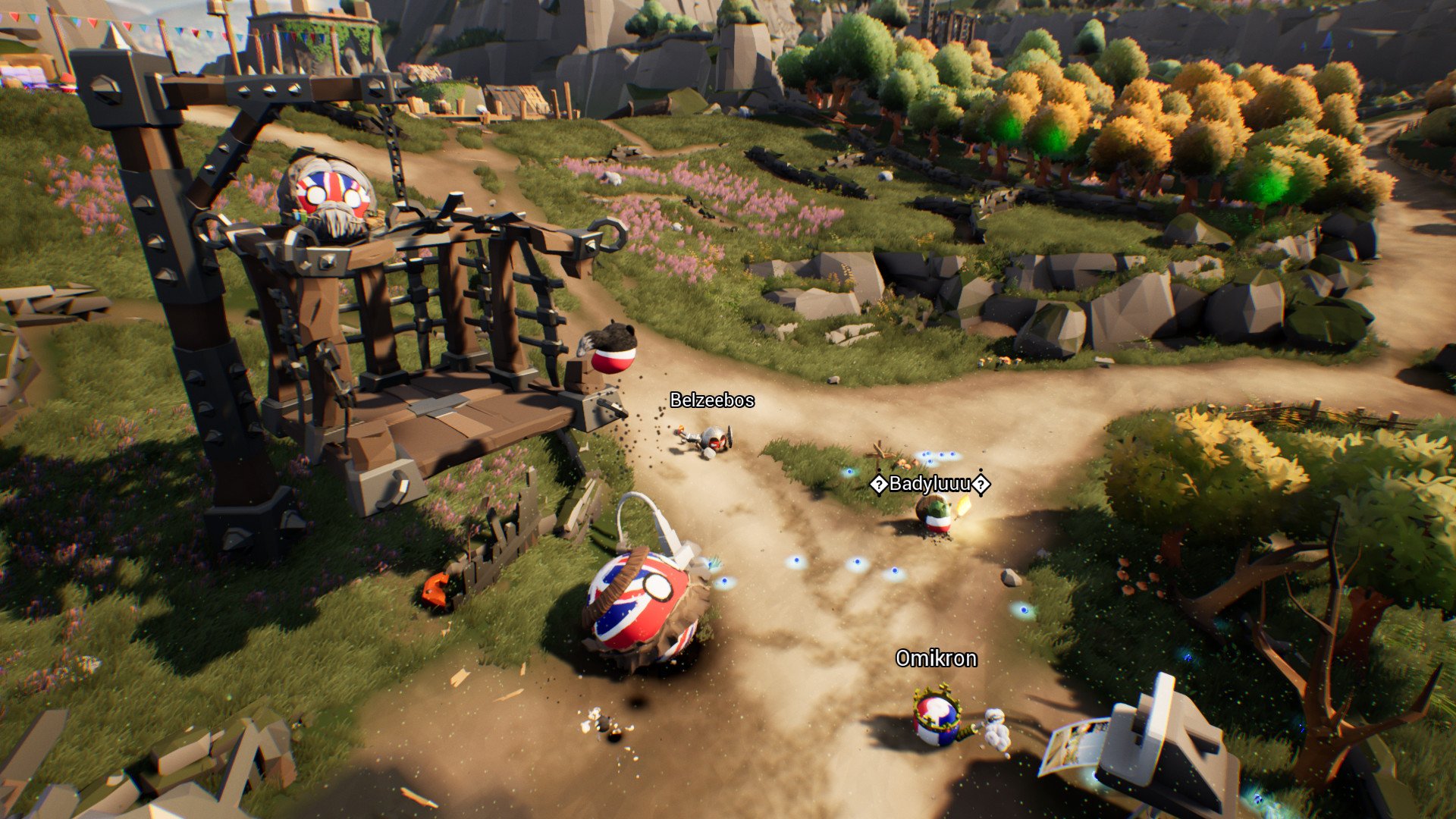 Any regular readers of Geeky Hobbies will know that I am a sucker for video games with silly premises. While there are plenty of games with serious premises that are still enjoyable, one of the best ways to stand out in my opinion is to create something unique that hasn’t really been done before. Released in Early Access back in March, Bang-On Balls: Chronicles is a game that intrigued me when I first saw it. A game set in a world where sentient balls recreate human history. Whats not to like? The fact that the game was also a 3D platformer, one of my favorite genres, helped as well. While the game is a little light on content at this point, Bang-On Balls: Chronicles has a ton of potential to be a highly unique and enjoyable 3D platformer that I can’t wait to see what it eventually becomes.

In Bang-On Balls: Chronicles you play as a sentient ball in a world where you and other balls recreate human historical events for a show/film. You and up to three of your friends will play as heroes who are tasked with completing various tasks spread amongst a number of different historical time periods. Can you put on a good show as you play out some historically inaccurate scenes from history?

At its core Bang-On Balls: Chronicles is a 3D platformer. In many ways the gameplay is similar to your typical 3D platformer with some tweaks since you are playing as a ball. The game gives you a jump which you use to move between platforms. You also have a dodge button which turns into a roll if you hold it. Outside of jumping between platforms the levels are filled with enemies that stand in your way. The combat in the game is pretty straightforward. Basically to attack enemies you will use your dodge to bump into enemies or you can slam down on them. You also have a shield which you can use to block enemy attacks. An enemy is defeated once it runs out of health. If you should run out of health you will be sent to the last checkpoint you unlocked.

The world is broken up into a hub world that has portals to the different levels. Each of the levels are based off a different historical period (the first is based off of the Vikings). Each level has a main challenge to complete. For example in the Viking world you need to destroy Viking ships placed around the level. Once you complete the objective you will unlock a boss battle to clear the level.

Each level has much more to do than just the main objective though. Based on the Viking level, the levels in Bang-On Balls: Chronicles are quite large. They are filled will tons of collectibles. You can find objects to customize your character with as well as film reels that unlock additional levels. Along with the platforming and combat there are various challenges to complete and puzzles to solve.

There are two things that initially intrigued me about Bang-On Balls: Chronicles. First I am a huge fan of 3D platformers. Second how could I not be intrigued by the game’s whole atmosphere. On both of these fronts I like what the game has to offer at this point.

One thing that I was honestly a little surprised by was the combat. I honestly thought the combat was going to be pretty bland as how much could you do for combat with balls attacking one another. The combat is kind of basic as you mostly just launch yourself at enemies bouncing into them to deal damage. I would say that the combat is a little simple as in many cases you can just keep pushing the dash button to keep hitting enemies. You can’t always do this as enemies will put up their shield or attack you while you are dashing at them. While the combat is kind of simple, there is something surprisingly satisfying about bouncing into enemies in order to deal damage to them. If you are looking for a complex battle system, you may be a little disappointed. If you want a fun simple combat system though you will likely really enjoy the combat in Bang-On Balls: Chronicles.

I think what really brings everything together is the fact that based on the Vikings level the level design is really good. I was genuinely surprised by how large the levels can be. There is much more to the levels than just completing the main objectives. Each level kind of feels like its own little open world game. There are a bunch of areas to explore and a lot of collectibles to pick up. Those who like finding hidden objects or just exploring in general should have a lot to like about Bang-On Balls: Chronicles. The level design is quite good as it does a good job creating unique locales and challenges that you need to complete in order to proceed. The variety in locales keeps the game interesting instead of forcing you to do the same things over and over again. The only real complaint that I have is that I wish it had a map as it is kind of hard to know where you are at any given time in the world.

Other than the gameplay, the other element of Bang-On Balls: Chronicles that intrigued me was the overall atmosphere. Any long term readers of Geeky Hobbies will know that I always appreciate a game that is willing to try something new. While the game doesn’t really have much of a story at this point, I still really enjoyed the atmosphere that the game has created so far. Basically the game’s story appears to be a group of sentient balls are for some reason recreating historical events for some sort of television show or movie. While they understand the basics of the historical events, they take quite a few liberties as well. The developers know that the premise behind the game is silly, and they embrace it. The whole game is quirky and charming. Those that were intrigued by the game’s premise should really like this aspect of the game as it is really well done.

Honestly there is a lot to like about Bang-On Balls: Chronicles. For a game that is expected to stay in Early Access until the end of 2022, you have to commend what the developers have already created. Most of the mechanics are already in place, and the gameplay is already fun. Based on what is in the game already you can see that the game shows a lot of potential.

Really the only problem that I have with the game right now is the lack of content. At this point the game only has a tutorial, the hub world, and the first level. While the first level is quite large, the amount of time that you will get out of the game at this point is a little limited. There are a lot of collectibles to pick up and areas to fully explore, but once you finish the first level there isn’t a whole lot else to do in the game except for playing through the level again. I see this as a short term problem as more levels will be added to the game in the future. If they are on par with the first level the game will have a lot to offer players. If you are expecting a long game at this point though you likely will be disappointed. Basically you will enjoy your time with the game, but you will need to be patient as more content is added.

While Bang-On Balls: Chronicles has a long ways to go as it will be spending at least the next year in Early Access, it is hard to not like what the game already has to offer. The game is for the most part a 3D platformer with some slight tweaks related to the fact that you play as a ball. The platforming is pretty similar to your typical game from the genre, and yet it is still quite satisfying due to the controls being pretty precise along with the level design. The combat is pretty basic, but it was actually more enjoyable than I was expecting as it is surprisingly satisfying flinging yourself into enemies in order to deal damage. The one level in the game right now is quite large and gives players a lot of options to explore and collectibles to pick up. The overall atmosphere is quite quirky/charming as well. Honestly the biggest issue with the game right now is just that the game only has one level so far so the experience is kind of short. This should be fixed as the game is further developed though.

If you don’t really care for 3D platformers or don’t care for the game’s theme, Bang-On Balls: Chronicles may not be for you. If you are a little leery about the game not having a lot of content at this point, you should maybe wait a little for the game to be further developed. Otherwise if the game’s concept interests you at all, you should really enjoy Bang-On Balls: Chronicles and should consider checking it out.