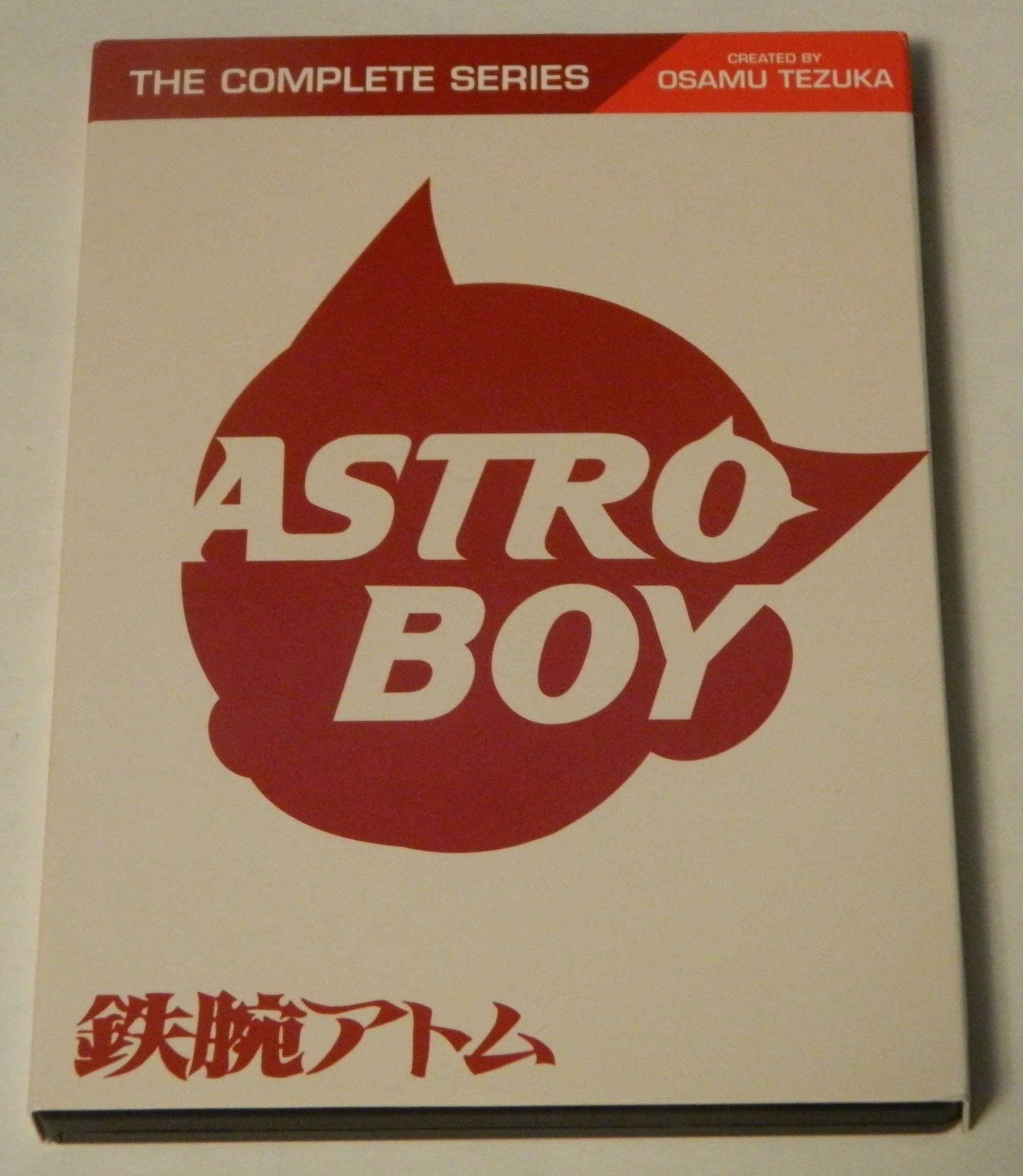 Even as a relative newcomer to the world of anime and manga, I was of course still very aware of Astro Boy. It’s one of the most well-known manga series of all-time and it has been adapted into numerous anime shows throughout the years. A few weeks ago, Mill Creek Entertainment re-released the complete series of the 2003 version of Astro Boy. While this version isn’t nearly as well-regarded as the 1963 or 1980 series, it’s still a solid though unspectacular adaptation of its source material. This release of Astro Boy: The Complete Series doesn’t add anything new to the table (other than the nice minimalistic slipcover) so if you already own the series on DVD (either the original Sony release or the 2015 Mill Creek Entertainment version), there isn’t really anything here to make another purchase necessary. For those who don’t already own it, it is worth a look especially for those who watched it when it first aired and are nostalgic for it.

For those who don’t know, Astro Boy is an anime series about an AI robotic child named Astro who was created using a new technology called Kokoro (which allows robots to be built with a “heart”). Astro was originally created by Doctor Tenma as a replacement for his dead son Tobio. However, he went crazy and disappeared, leaving his post as the Minister of Science. He is replaced by Dr. O’Shay, who discovers Tobio/Astro and decides to bring him to life to help humans and robots alike. Astro has many powers including hands and feet that double as rocket boosters, super strength, and so much more. Unlike a lot of cartoons aimed towards children, Astro Boy actually has story arcs and an actual ending to the series. However, only some of the episodes are serialized and the majority of them have Astro helping malfunctioning robots, humans in danger, or stopping antagonists who use robots for their own good (like recurring villain Skunk).

While I watched a large enough amount of the episodes of this series to accurately judge it for this review, please note that I haven’t watched either of the two previous series (the supposedly better ones) so I can’t really compare them. Thus, this review won’t be comparing and contrasting the different Astro Boy series, I will just be grading the 2003 series on its own merits. I must also mention that I never watched this series when it first aired so I have no nostalgia for it (nostalgia is a very powerful factor in how people view things, especially with cartoons). I would say that the aughts version of Astro Boy is consistently average. There is absolutely nothing horribly wrong with the series, there just aren’t a whole lot of things I’m going to gush over either.

One thing I did like about Astro Boy is that the show is considerably more serialized than many other cartoons from the time period. While TV animation has been starting to get more serialized lately, it was mostly an afterthought back in the ’90s and ’00s. There were a few shows like Teenage Mutant Ninja Turtles that had story arcs but it still wasn’t super common. As someone who prefers for each episode to “matter” instead of things going back to normal at the conclusion of each episode, I will always prefer cartoons and anime like this with continuing storylines.

Astro Boy (2003) is a bit repetitive though. Metro City is invaded seemingly dozens of times during the course of this series. Nearly every episode involves a robot malfunctioning or causing problems, but this is almost always due to a bad human forcing it to do so. Most of the plots are completely by-the-numbers but there are a few more unique ones every so often. I know that this is a cartoon meant for children but almost every plot is also super obvious for adults. It doesn’t help that Dr. O’Shay (and sometimes Astro) is always playing the role of Mr. Obvious, telling us what we are seeing even though it should be incredibly obvious even for small children. Of course this is meant to help small children follow the plot but it annoyed me quite a bit (and I’m sure a lot of kids don’t like being talked down to as well).

Other than the repetitive storylines and obvious plot developments though, Astro Boy is a reasonably fun watch even for adults. If you can get past those two annoying aspects, the series is actually quite exciting and action-packed. Every episode has at least one exciting heroic moment from Astro. For B-movie fans, this Astro Boy series might also be appealing as most episodes I watched had at least one ridiculous moment that is good to make fun of. You will laugh at phrases like “I don’t believe it, the vegebots have built a dam out of giant vegetables,” especially since the voice actor says “vegetables” in a very funny way. Most of the mockable content comes from Dr. O’Shay, whose voice actor is way over-the-top and very easy to make fun of.

Astro Boy (2003): The Complete Series has been released on DVD before, once by Sony Pictures Home Entertainment in 2005 and a Mill Creek Entertainment release ten years later in 2015. While I don’t have either copy to compare this version to, I would guess this version is completely identical to the Mill Creek release (other than the slipcover and box artwork). As the Sony release is five discs instead of four, I would guess the picture quality on that release is likely the best due to less compression (though the release is also more than a decade older than this one). The video quality on this 2019 Mill Creek Entertainment release is about what you would expect from a ’00s cartoon series. The video quality is certainly acceptable but like most older cartoon releases, it hasn’t really been cleaned up at all. You really shouldn’t expect perfect video quality from releases like this anyway as the target audience is relatively small and doesn’t really warrant the added cost that pristine video quality would require. No bonus features are included on this release or the other Mill Creek release, but the Sony release had a “Remaking of Astro Boy” extra included on it.

While the other two Astro Boy series have slightly better ratings on IMDB, I think the 2003 series is perfectly fine in its own right. While the show is certainly repetitive and annoyingly explains everything you are seeing on screen, there are a few things to like as well. The animation is quite impressive for a cartoon from the early ’00s, the show is exciting and action-packed, and the show is semi-serialized. I wouldn’t say it is a must-watch (especially if you’ve already seen and loved one of the two older series) but I would recommend it to fans of animation.

Astro Boy: The Complete Series was released on DVD on February 5, 2019.