Skip to content
Board Games » Reviews » Party » Articulate! Board Game Review and Rules 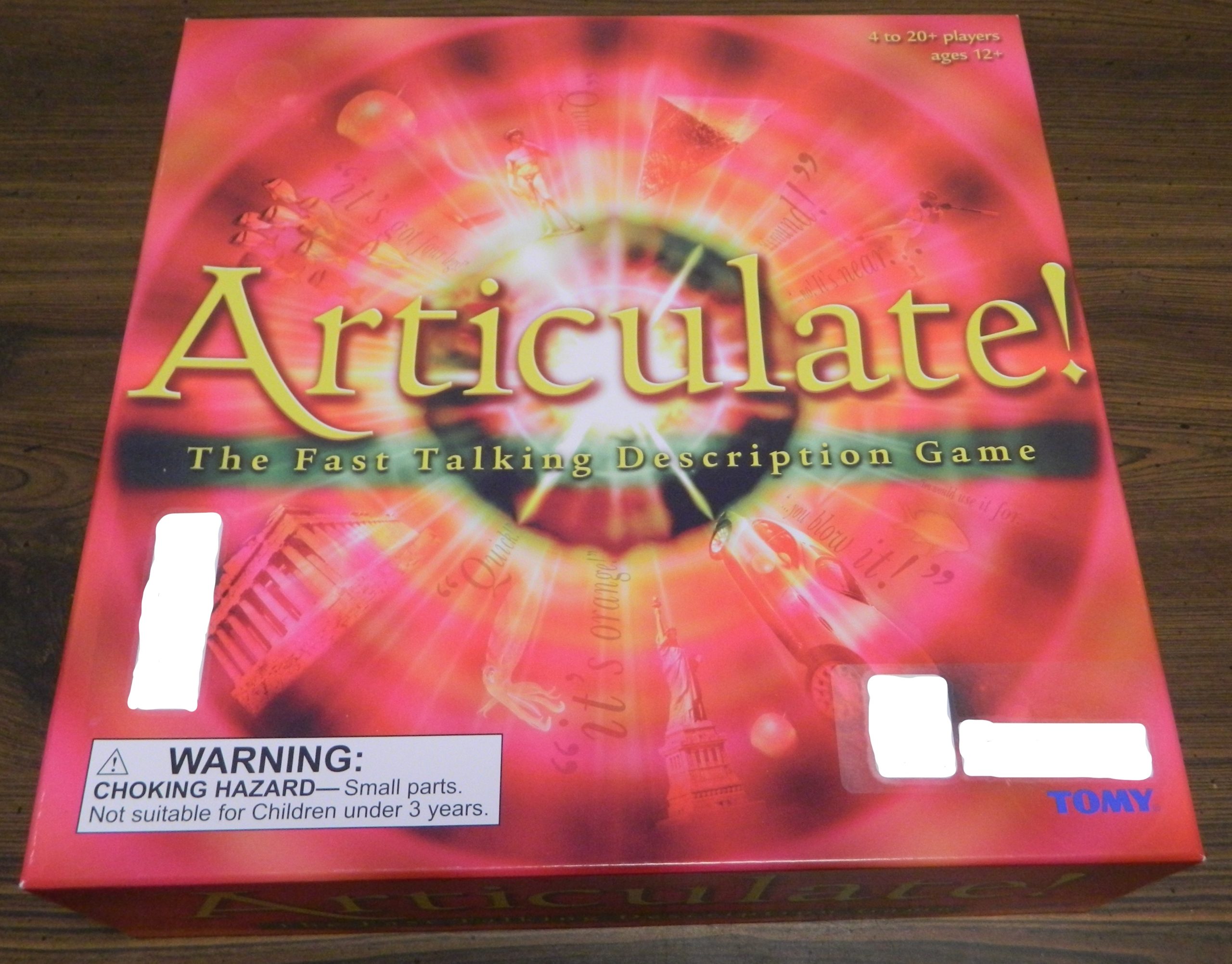 Today I am actually looking at a board game that is a little different than the games that I normally look at. As an American we have played a lot of board games created from around the world. Most of these games get worldwide releases though. This was not always the case though as today I am looking at Articulate! which was a party game created in 1992 that was quite popular in the UK as well as a few other countries. The game never really made its way to the United States though. Last year the game finally made its United States debut with the latest edition created by Tomy. I honestly can’t say that I had ever heard of Articulate!, but I was intrigued because I am a sucker for a good party game. Articulate! is a fun little party game that even those reluctant to play board games should enjoy, even if it fails to really do anything particularly original.

How to Play Articulate!

Note: These rules and the review in general is based off of the 2019 version of the game. Older versions of the game may have slightly different rules.

When describing the word/phrase the Describer(s) have to follow certain rules. If they break one of these rules, their turn will end immediately and they won’t earn any spaces for the round. The rules Describer(s) must follow are as follows:

If the Guesser(s) say the correct word, the Describer(s) will quickly draw a new card and begin describing it.

The round ends when the timer runs out. The Describer(s) will count up how many cards that the Guesser(s) guessed correctly. They will then move their playing piece forward the corresponding number of spaces. Some versions of the game (not the 2019 version) appear to limit the number of spaces that you can earn to five. If a team lands on a Control or Spin space they will take the corresponding action. Otherwise the team’s turn will end.

When a team lands on a Control space (white space with Spades symbol) they will play a Control round. The Describer(s) for the current team will take the next card from the stack and will look for the category that has the Spades symbol next to it.

They will then describe this word/phrase to the rest of the players including the other teams. The first team to shout out the correct answer will win the round. The winner of the round will get to take the next turn. If it was the team that initiated the Control round, the roles of Describer(s) and Guesser(s) will change. For their next turn they will use the categories marked with the spades symbol instead of a normal category.

When a team lands on one of the Spin spaces, orange and red spaces that extend into the center of the board, due to guessing words/phrases correctly; they will get to spin the spinner.

Depending on what they spin they may get to take a special action.

If the spinner lands on two different sections, you will spin again to determine what action is taken.

When moving other team’s pieces you can never move them back past the start space.

If the team that reached the finish space didn’t win the round, the game will continue like normal. On their next turn the team will play another Control round in order to try and win the game.

My Thoughts on Articulate!

So I will admit that I had some mixed feelings about Articulate!. As a fan of party games there were a lot of things that I liked. Unfortunately the game kind of fails to distinguish itself.

Basically Articulate! shares a lot in common with your typical party game. The game is based around trying to give your teammates clues in order to get them to guess specific words/phrases. The space that your playing piece is currently on determines which words/phrases you will use from the cards as the game breaks things down into a couple different categories including actions, objects, nature, persons, world, and random. You will then be given time to try and describe as many words from that category as you can. You will earn spaces for each word/phrase that is guessed correctly. The ultimate goal of the game is to reach the finish before the other players.

If after reading that short explanation of the game you got a strong sense of déjà vu you are not alone. Anyone who has played more than a couple party games will likely have played a game that reminds them a lot of Articulate!. This is mostly because the concept behind the game is not particularly original. In fact there have been a lot of board games that have used this exact formula. I know because I have played a number of games that have players try to describe certain words in order to get their teammate to guess a specific answer. There have even been games that have taken this concept and put more limitations on the clues that you can give such as Taboo. Basically if you have played one of these types of games before, you should already have a good idea of whether you will enjoy Articulate!.

While Articulate! is not going to win any awards for its originality, that does not mean that it is a bad game. In fact I enjoyed the game quite a bit. I have always enjoyed this formula of trying to describe words to get my teammates to guess them. This holds for Articulate! as well as it maintains the key elements of what makes these type of games enjoyable. It is satisfying coming up with words that help your teammate guess a lot of answers in a short period of time. If you like these type of games or think the concept sounds interesting, I see no reason why you wouldn’t enjoy the game.

Part of the reason that Articulate! succeeds in this area is that it knows what is needed for a good party game. For a party game to succeed it needs to have fun gameplay, but it also needs to have simple rules where new players can jump right in and know exactly what they are supposed to do. This describes Articulate! well. I would say that the official rules could have been written better, but the gameplay itself is really straightforward. If you are familiar with these type of games you can pick it up almost instantaneously. At max it might take a couple minutes to explain the game to those less familiar with the genre. Simple mechanics are a necessity for this type of game as it allows you to quickly jump into the game.

I will say that the game does rely on some luck though. This is mostly because not all of the cards are created equally. This will be more prevalent with older versions of the game. The older versions of the game are apparently becoming pretty outdated which I can see as the 2019 version does feature quite a few things that likely will become outdated at some point. The problem is that people will find some categories to be considerably easier than others. Individual cards from the same category could also be quite different. Because of this, the team that gets easier cards will likely have a pretty big advantage in the game.

Other than the main mechanic, I would say that the side mechanics are kind of pointless. I didn’t hate the Control rounds as having players compete to guess the correct answer is pretty fun. It is kind of unfair if you are playing with more than two teams though. A team could end up losing their turn because another team guessed right first. The bigger problem is the spinner. The spinner feels pointless as it feels like it was only implemented in order to keep teams that struggle in the game. If you are lucky to land on one of these spaces you could either get free spaces or send another team back. I honestly don’t see the point of sending teams back as you are better off moving forward yourself. The spinner just doesn’t add anything of value to the game in my opinion. I personally would ditch it entirely and just stick to the main gameplay.

As for Articulate!’s components I can only comment on the 2019 version. For that version I would say that the components are quite average. I applaud the game for including 500 cards. With there being six answers on each card you should be able to play a lot of games before getting stuck with a repeat. The cards are also designed well. The cards are otherwise pretty typical. The same can be said for the playing pieces and the spinner as they are made of pretty typical plastic for this type of game. As for the gameboard it serves its purpose, but it is otherwise quite dull.

Should You Buy Articulate!?

In many ways Articulate! is the definition of a solid but unspectacular party game. The game is quick and fun. I enjoyed playing it quite a bit. It is easy to learn and should work really well at parties. The main problem with the game is just that it is not particularly original. There have been many other games created over the years that have implemented basically the exact same gameplay. If you have played one of these games before, you aren’t really getting anything new from Articulate! outside of some new cards. Other than this the game relies on a decent amount of luck as some cards are easier than others.

My recommendation for Articulate! is actually pretty straightforward. If you hate party games or already own a game similar to Articulate! I don’t see it being worth picking up. Those that enjoy these type of party games though and can get a good deal on Articulate! should consider picking it up.

Cro-Magnon Board Game Review and Rules