To be the first player to get all four of their ants inside the pair of pants.

Attach the suspenders to the pair of pants and put the pants in the middle of the play area. Each player takes the four ants of one color.

The first player to get all four of their ants into the pair of pants wins the game. 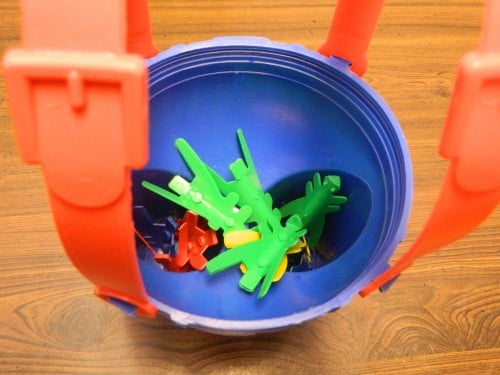 The question is whether the game is actually also enjoyable for adults. Everyone knows that Ants in the Pants is far from a strategic game. Its’ debatable whether the game even relies on skill or just on luck. Even though I enjoyed the game as a child there was no guarantee that the game would still be good for adults. I have been burned many times before when a game I loved as a child turned out to be a pretty bad/stupid game for adults. After playing a couple rounds of Ants in the Pants I have to say that the game was more enjoyable than I was expecting.

This isn’t to say that Ants in the Pants is a great game for adults. It is better than a lot of children’s games though since the game is meant for children but adults can still enjoy it in short doses. Although the game relies heavily on luck, Ants in the Pants is a game that you enjoy for a couple quick rounds. I mean really quick since you can usually finish a round in 2-5 minutes. I wouldn’t play the game very often but for nostalgia purposes I would bring the game out every so often.

Unless you master the game I think the game is more luck than skill. Obviously you need enough skill to put the right amount of pressure on the ant and aim it properly but I think you are mostly relying on luck. The ants are far from precise and they generally just fly anywhere so you need to get lucky that they fly in the right direction. While aiming can have some impact on the game I don’t see Dicecapades as a game where aiming has a huge impact on the game. I think you mostly need to just get lucky to have the ant fly into the pants.

While I liked Ants in the Pants considerably more than I was expecting I have to admit that I have the same gripe with it that I have with every other game where you need to launch pieces into the air. Just like all of these other games you have to waste a bunch of time picking up your pieces after missing the pants. At least in the games I played you spend more time picking up ants than actually shooting them. This creates issues where players have to either waste time retrieving other people’s ants instead of shooting their own or players have to run all over the room picking up their ants. There really isn’t anything the game could have done with this problem either. It is too bad that none of these “launching” games were ever able to find a way to eliminate this problem.

Being a game made for children I have to say that Ants in the Pants is a great game for younger children. The game is really easy to play and has enough excitement/energy to keep children entertained. I know I loved the game as a child. I loved flipping the ants into the air. I can’t imagine children today not also loving the game.

While Ants in the Pants is not a fantastic game, it was actually better than I was expecting. The game is so simple but for some reason it is still pretty fun for adults and is a blast for children. While I would only play the game occasionally (for nostalgia) it is a game that I would actually come back to every so often. If you are looking for a strategic/challenging game, Ants in the Pants is definitely not it. If you have fond memories of the game or are looking for a game for younger children though you can’t go wrong with Ants in the Pants.