Many popular movies eventually get a board game adaptation of some sort. Sometimes this is due to the publisher trying to make a quick buck and other times it is due to the designers actually thinking they can make a good game based on the franchise. A movie I never really expected to get a board game was Anchorman. Part of this was because Anchorman originally came out in 2004 with the sequel coming out in 2013, and there was also the fact that it isn’t the type of movie that has an obvious gameplay mechanic built in. While I have seen both Anchorman movies and thought they were okay, I am not even close to as big of fan of the movies as a lot of people. Despite not being a huge fan of the movies we were sent a review copy of the board game which released last year. It normally wouldn’t be the type of game that I would check out, but I decided to give it a chance. Anchorman The Legend Of Ron Burgundy: The Game – Improper Teleprompter has an interesting premise that had potential which unfortunately is only going to work for certain groups.

How to Play Anchorman The Legend Of Ron Burgundy: The Game – Improper Teleprompter

All of the players outside of the current anchor will randomly choose a new story and add it to their News Tray. 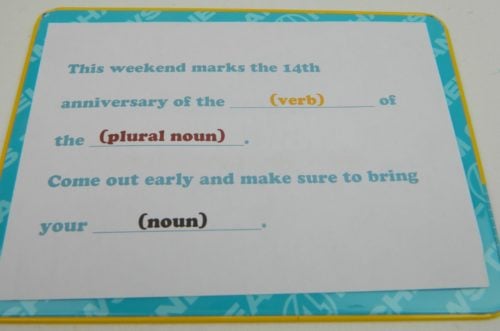 This player received this story for the current round. They must choose three magnets from their selection of words to fill in the blanks.

The timer will be set to 60 seconds. Each of the players have 60 seconds to choose words to fill in the blanks in their story. Players must use the appropriate type of word in each story blank. 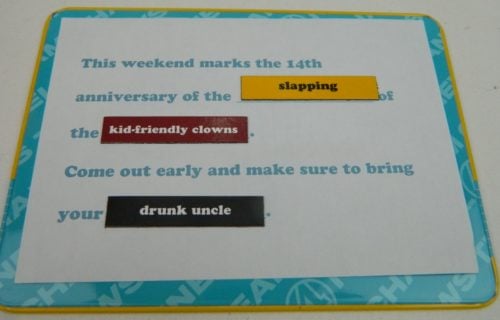 This player has completed their story. The current anchor will have to read the entire story without “breaking”.

When the timer runs out all of the players will place their News Tray into the teleprompter in a random order so the anchor doesn’t know who wrote each story.

The anchor will then try to read each of the stories without breaking. Points will be awarded based on how well the anchor does with reading the stories.

If the anchor gets through all of the stories without breaking, they will earn one point.

Any story that makes the anchor break, will earn one point for the player that constructed it.

At the end of the round the anchor will also choose which story that they thought was the best. The player who created the story will receive one point.

Players will take one score token magnet for each point they earn and attach it to their News Tray. 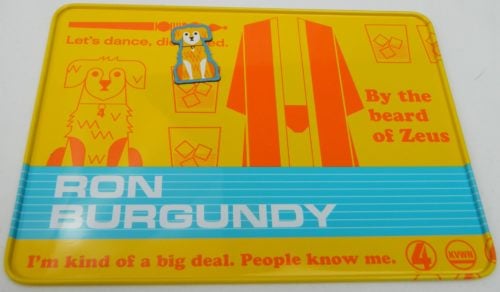 This player has scored a point so they place one of the scoring tokens on the back of their News Tray.

After scoring is completed each player will take their News Tray back. All words and cards used in the round are discarded. Players will draw new words to replace those that they used.

The next player clockwise becomes the next anchor.

When the players are ready to end the game, one last round is played.

The player that has acquired the most score tokens wins the game.

My Thoughts on Anchorman The Legend Of Ron Burgundy: The Game – Improper Teleprompter

After playing Anchorman The Legend of Ron Burgundy: The Game – Improper Teleprompter I have to say that I have conflicted feelings about it. Personally the game wasn’t for me, but that doesn’t necessarily mean that it is a bad game. In the right groups I think the game could be a blast.

If I were to sum up the game in just a couple of words, I would say that it is pretty much an adults only version of Mad Libs with some game mechanics built in. Basically players take turns acting like a news anchor while the other players make silly, stupid, or just plain weird news stories that the anchor has to read like they are normal everyday stories. If the anchor laughs, smiles or even diverts from reading the story normally, the story writer will receive a point. If the anchor reads all of them without stumbling though, they will receive a point.

In theory this is an interesting premise. The game is more of a social activity than a traditional game. While the game awards points and has a winner, you can’t take the game too seriously. Instead of trying to actively win the game, you need to just try to have fun and laugh with the other players. The game is easy to play and you can play it for however long you want. For this reason I think the game could work great as a party game for some groups. While the game can be played with two players, based on our experience I would not recommend the two player game. In fact I would recommend playing with as many players as possible.

As for the game’s strategy, I don’t really know if there is any. That is not surprising as the game is not meant to be a strategic game. Outside of knowing the other players which can improve your odds of making them laugh, there isn’t much you can do to improve your chances of doing well. I am actually kind of curious what the most successful approach would be to creating stories. Would making a story that is genuinely funny or something that makes literally no sense increase the odds of the reader breaking. I am not sure. The game really isn’t the type that you should put too much thought into anyway.

The main reason that I bring this up is that I didn’t find the game to be particularly hard. What I mean by this is that our group didn’t find it to be that hard to be the anchor no matter what stories were made. I am not entirely sure why it was so easy playing as the anchor either. I don’t know if it was because the game didn’t really utilize the type of humor that works well for our group. Maybe it was because we chose to play with the laugh rule where the anchor had to laugh for it to count. If you just focus on trying to read the story it is pretty easy to get through without laughing. Because of this I would highly recommend either using the smile or pausing rule as that would make it a little more difficult for the anchor.

The main problem is that the game has a target audience, and my group and I are not part of it. The game has a recommended age of 17+ and I completely agree with the recommendation. The stories themselves are fine for a younger audience. The problem is that many of the words/phrases that you can choose are inappropriate for younger audiences. Between swear words, sexual references, and other adult topics; there are words that you would definitely not want to use with younger players. I would say that 25-30% of the words probably fall into the adult category where you would have to take them out if you played with teens or children.

I personally don’t have anything against these type of adult games as there should be games made for all types of gamers. I personally have never had any real interest in these type of games though. It is not my type of humor and I am not the type of person to play games that are edgy. Because the game uses this type of humor, it just isn’t the type of game for me. I didn’t find the game to be particularly funny most of the time. This really hurt my enjoyment of the game as the game is built around trying to make your friends/family laugh. This just didn’t happen all that often with the group I played the game with.

As for the game’s components I would say that there are things that I like, and others that I think could have been better. I thought the use of magnets was actually pretty clever. The word magnets are basic but they actually work quite well. On top of this the game includes 585 different words so there are plenty of options where you will have to play the game a ton before you would ever have to make the same story a second time. As for the stories themselves I liked that the game has 120 different cards. The cards are made of paper though so they could probably be damaged pretty easily. Otherwise the components are solid but nothing special.

Should You Buy Anchorman The Legend Of Ron Burgundy: The Game – Improper Teleprompter?

Ultimately I didn’t really know what to think of Anchorman The Legend Of Ron Burgundy: The Game – Improper Teleprompter. I was actually intrigued by the premise. In a way the game feels like what you would get if you turned Mad Libs into a party game. The idea of trying to make funny stories to get the other players to laugh sounds like a fun idea. In some groups the game will likely be a blast. Unfortunately my group and I were not part of that group. We generally don’t like the raunchy adult party games and this game fits right into that category. We just don’t find this type of humor to be all that funny which ultimately hurt our enjoyment of the game. In fact it was hard to get anyone to laugh/break. Those who enjoy these type of games though will likely really enjoy the game.

For this reason it was hard to give the game a final rating. My group and I didn’t really care for the game, but I can see people enjoying it quite a bit. Thus for my final rating I decided to go with something between what I would personally give it and what I think someone of the target audience would rate it. This ultimately lead to the game receiving a three out of five.

As for recommendation I think it really comes down to whether you like party games with adult content in particular. If you don’t really care for party games or don’t like the adult only content, I don’t see the game being for you. Those who like adult gauged party games though will likely really enjoy Anchorman The Legend Of Ron Burgundy: The Game – Improper Teleprompter and should consider picking it up.