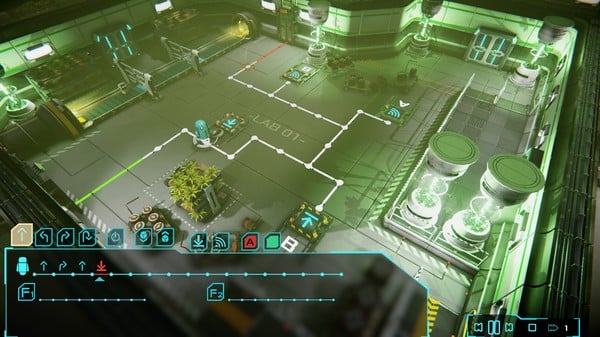 From the creators of Epistory – Typing Chronicles (a surprisingly good typing game) comes Algo Bot. In Algo Bot you play as the title character who along with another robot named PAL are tasked with cleaning up a pan-galactic colonization ship while the human crew sleeps. Things go wrong quickly though as the whole ship comes into danger. Can PAL and Algo Bot work together to save the ship in time?

Algo Bot is at its heart a programming puzzle game. In each puzzle you are given a different task to do. Your task is to give the directions that Algo Bot needs to get from the start to the finish completing the required tasks along the way. This entails telling Algo Bot when to go forward, turn, press buttons, and download and upload data. In the early levels this entails dragging and dropping the necessary commands into Algo Bot’s list of commands. The challenge comes from the fact that you can only give Algo Bot a certain number of commands. This forces you to find efficient ways to get Algo Bot to do all of the required tasks.

As the game progresses though things get more challenging. Eventually you are given the ability to create functions. Players can use the functions to cut down on the number of commands that have to be given. The functions are used in situations where the same commands are repeated several times as you can just call the function instead of repeating the same commands over and over again. The game eventually forces players to use functions as there otherwise are not enough commands for Algo Bot to complete its mission. Algo Bot also eventually gives you a conditional which you can use like an “if statement” in order to choose between two different lines of code. When you combine these two mechanics together you can develop simple loops which will really help you streamline your commands.

On the surface Algo Bot might look like a game where you are just giving directions to a robot to complete different tasks. When you look under the surface though, it is actually cleverly teaching players some basic computer programming concepts. The game doesn’t teach you any actual programming language but it teaches you the basic concepts of programming including planning out what you need a program to do as well as variables, functions, conditionals, and even some basic loops.

Heading into Algo Bot I already had experience with computer programming. I bring this up so you know that this review is coming from someone with a moderate level of programming skills. Nonetheless I have to say that I think Algo Bot could work quite well as a teaching tool to people that have no computer programming knowledge. The game does a good job making learning about coding feel like more of a game than a learning experience. The game introduces the different concepts over time giving players time to get used to a new concept before it introduces the next concept. I think Algo Bot could work really well as an introductory tool to teach people computer programming.

From someone who has some programming experience, I have to admit that Algo Bot is a little on the easier side. Now this is great for people without programming experience as it is not so difficult that it will become frustrating. It will probably be more difficult for someone who doesn’t have any programming experience but for most of the levels it is pretty easy to find a solution that is good enough to progress to the next level. For those having troubles I actually found it to be helpful writing out the commands on a sheet of paper since it made it much easier to see the patterns that could be used in functions. There are a couple levels that are a little more challenging as they basically require you to get close to the optimal solution or you won’t have enough commands to complete the level. The good thing is that the game actually includes a hint for each level. Some are more helpful than others but they generally guide you in the right direction. I really like that the game included these tips since if you don’t need them you can skip them. If you get stuck though they are there to nudge you in the right direction.

If you already have a basic understanding of programming I don’t think you are going to have much of challenge completing most of the levels. Most of the levels give you quite a bit of leeway with how many extra commands you can give. This means that with experience you should be able to solve most of the puzzles pretty quickly. Most of the challenge comes from trying to optimize each puzzle. While you will sometimes come up with the optimal solution right out of the gate, the game lets you go back and try to reduce the number of commands you use to complete the puzzle. If you are interested in optimizing your solutions you can get a decent amount of challenge out of finding the optimal solution for every puzzle.

Basically I would say that Algo Bot is a fun puzzle game even though I would say that it is a little on the easier side of the spectrum. This is not necessarily a bad thing. If you like really challenging puzzle games Algo Bot is probably not going to be for you. If you don’t know any computer programming or you are looking for an easier puzzle game this shouldn’t be a big problem for you. I am generally a big fan of puzzle games and I had fun playing Algo Bot even if I found a lot of the puzzles to be on the easy side.

In total Algo Bot has around 40 puzzles. With it being a puzzle game how long the game will take to beat is going to come down to how fast you are at solving the puzzles. People with more programming experience will clearly be able to finish the game quicker than people with little to no experience. I think most people will probably take around six to eleven hours to complete all of the puzzles. If you want to find the optimal solution for each puzzle that might add a couple more hours onto the length. For a puzzle game that is actually pretty long. The problem is that I don’t think the game is going to have a lot of replay value. Once you optimize all of the puzzles I don’t see any reason to come back to the game unless you wait long enough to forget all of the solutions. I don’t really see myself going back and replaying Algo Bot a second time.

Other than Algo Bot being a little on the easy side, the other complaint that I have with the game is with the story. In general the story doesn’t play a large role in the game. The story is mostly told through dialog between the robots before the beginning of each puzzle. The story is far from bad but it is kind of generic in my opinion. Once the story got going I already had a good idea on how it was going to end and I wasn’t that far off. The characters are likeable enough and there is some humor interspersed throughout the game. I just wish there was a little more originality in the story.