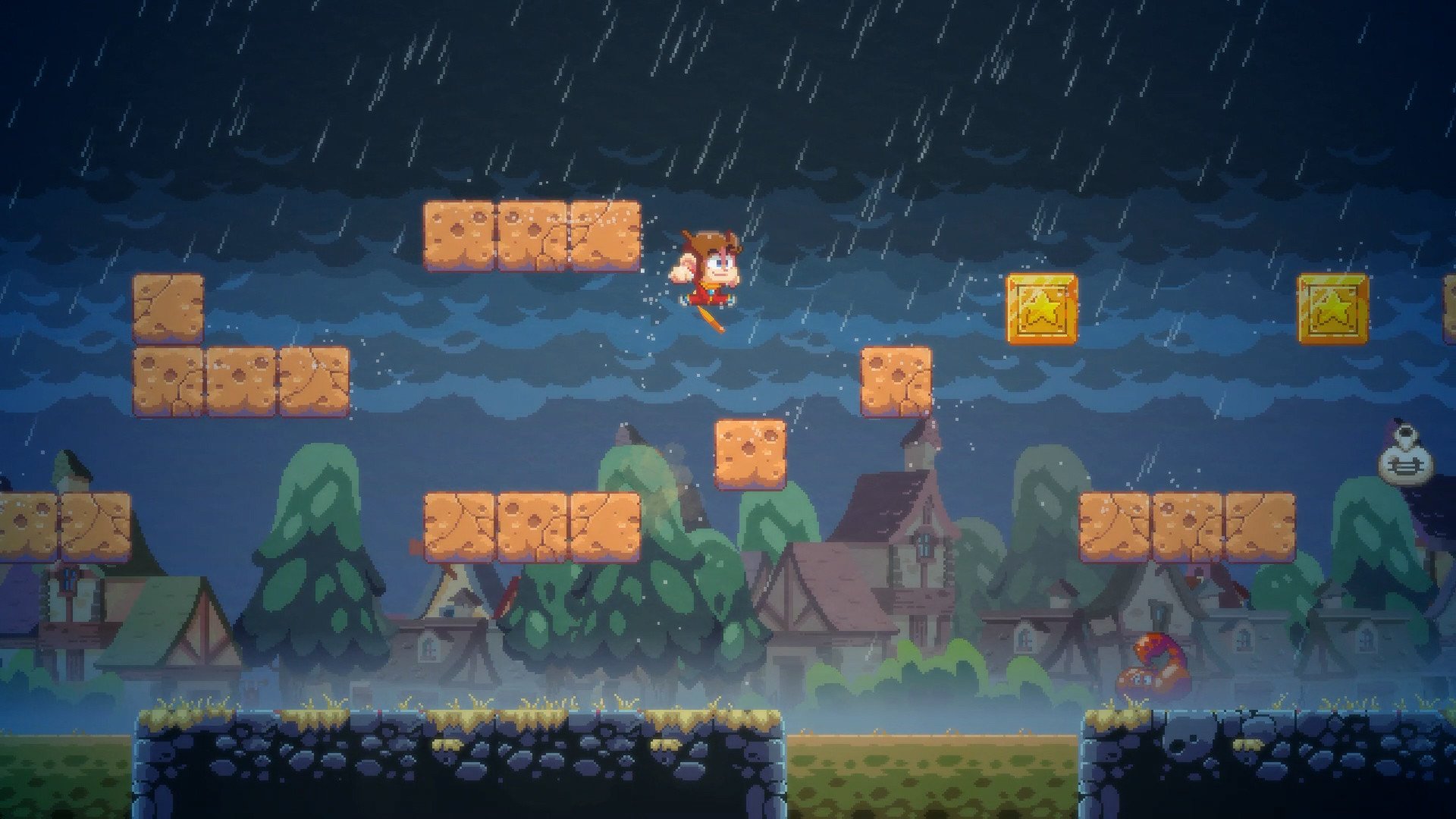 Originally released back in 1986 Alex Kidd in Miracle World was arguably one of the most popular games released for the Sega Master System. In fact it eventually became a built in game for most of the later Sega Master Systems. As I have never owned a Sega Master System I am not particularly familiar with the franchise and had never played any of the games. While the original game was ported to a number of systems over the years, the game never received a full remaster until today with Alex Kidd in Miracle World DX. I never played the original game, but I have always liked checking out remasters of old video games as I grew up with a lot of games very similar to Alex Kidd. Alex Kidd in Miracle World DX does a great job bringing an old classic to the present day with a new shiny coat of paint and other tweaks but still has some of the issues of a game that is 35 years old at this point.

In Alex Kidd in Miracle World DX you play as Alex Kidd. Alex’s kingdom has been launched into chaos after Janken the Great defeats the King and turns most of the kingdom’s residents to stone. In order to restore the kingdom Alex must retrieve a number of artifacts and make his way to the city of Radaxian to defeat Janken.

While there are some changes to the game, for the most part Alex Kidd in Miracle World DX is very similar to the original game. The game is more of a remaster than a re-imagining. Thus fans of the original game should have a good idea of what to expect from the game. Those who have never played the original game should expect a pretty typical action 2D platformer from the 1980s. Like all 2D platformers the objective of each stage is to keep moving right (occasionally you move left) until you eventually reach the end. Standing in your way are two obstacles. First there are various gaps/pits and other dangerous obstacles which you need to jump over. Second there are a number of different enemies that you will need to either avoid or destroy. Unlike a lot games from this era, you cannot jump on enemies to defeat them. The only way to defeat enemies is to use your punch attack.

The game is divided into around 20 stages. You are given three lives to finish each stage with the ability to acquire more. The game uses one hit kills. If you should fall down a pit or get hit by an enemy, you will lose one of your lives. When you re-spawn you will be sent back to your most recent checkpoint (usually each new screen has its own checkpoint). If you should lose all of your lives though you will be sent back to the start of your current stage (unless you use easy mode). As you progress through the levels you will gather money which can be used every so often in a store to purchase items which will give you a temporary upgrade.

I already mentioned that Alex Kidd in Miracle World DX is pretty similar to the original game. Since I haven’t played the original game I can’t give a definitive list of the differences and similarities between the two games. I did watch sections of a walkthrough of the original game through to try and compare different sections of the game. I would say that most of the game seems like an updated version of the old game. The layouts of most of the levels and individual screens are basically the same as the original game. I did notice a few changes here and there. I would say that most of the changes come from the boss fights which have become more elaborate even though the rock, paper, scissors mini games are still present. The game does have a few new levels as well.

Because it is a pretty accurate remaster of the original game, the gameplay hasn’t changed much in 35 years. Some people will see this as a positive and others a negative. The gameplay is very typical of a game released back in the 1980s. The gameplay is not as complex as more modern games which will be a turn off for some people. Most of the gameplay revolves around jumping around and punching blocks and enemies. Its simplicity has its own sort of charm though. Fans of 1980s action platformers will likely enjoy the retro feel of the gameplay. It is satisfying for the most part as it is fun defeating enemies and reaching the end of the levels. In many ways you have to applaud the designers for being quite loyal to the original game. The game does a good job bringing an older game back and modernizing it to appeal to a new group of players.

This does lead to some issues for the game though. A game that is 35 years old at this point is going to have some issues when you compare it to modern games that have had decades to improve upon the mechanics that games like Alex Kidd created. The first area where this is evident is in the controls. Now I am going to start by saying that the developers of Alex Kidd in Miracle World DX did a good job tweaking the controls in order to make them a little more precise.  It is evident that they wanted to remain loyal to the original game though. In trying to do so the controls can feel a little stiff at times. The jump mechanic doesn’t always work as you intend. This will lead to some missed jumps from time to time. The bigger issue is that it is sometimes hard to figure out yours and the enemies hit boxes. As your punch doesn’t go very far, it becomes a guessing game of how close you need to get to an enemy to hit them without them hitting you.  I think the developers deserve credit for updating a game that is 35 years old, but I wish they would have went a little further to polish up the controls even if this took the game a little further away from the original.

This leads to the other problem that I had with the game. For the most part games made in the 1980s and 1990s were more difficult than games made today. This was at least partially due to the fact that games were much shorter back then, so they were made harder to last longer. Alex Kidd in Miracle World DX for the most part maintains this old school difficulty. By itself this is not a problem as plenty of people love difficult games. I don’t mind difficult games as long as they feel fair. This is where I had some issues with the game. I would say that a majority of the game is moderately difficult. The game is not easy, but outside of some rare issues with the controls it is your fault when you die. Occasionally there will be a part of a level that feels unfair though where you need to be almost perfect in order to succeed. When you run out of lives this will send you back to the beginning of your current level. This can regularly lead to having to replay the same sections of the level to get back to where you died. This can become a little frustrating after a while.

This is not necessarily a dealbreaker for two reasons. First some people appreciate when a game is difficult and don’t mind having to restart levels. The main reason though is that the game includes an easy mode for people that want to avoid the frustration. The easy mode doesn’t make the gameplay easier as it stays exactly the same. The only thing that easy mode changes is that it gets rid of player lives. You still need to complete everything in the game like normal, you just don’t get sent back to the start of the level when you run out of lives. Some people are going to refuse to use this mode, but it does give players an option who otherwise would have been stuck banging their head against a wall.

While the remaster did add some tweaks to the gameplay, most of the changes come in the graphical variety. The game’s graphical style has been revamped from the ground up. Alex Kidd in Miracle World DX’s graphics were inspired by the originals, but are much more polished. You can see for yourself as the game has a button that you can press that switches between the old and new graphical style. I was genuinely impressed with what the developers did graphically. Outside of nostalgia, I really see no reason to play with the old graphical style. The remaster’s graphics genuinely look really nice. I think the game does a good job paying tribute to the original game while receiving the update that it needed in order to stand up to games released today.

As for the game’s length it is going to depend. The game is based on a 35 year old game so it doesn’t feature as much content as most games released today. I don’t have an exact number of levels, but I would say that it is around twenty. Some of the levels can be of a decent length, but quite a few are really short as well. I would say that a majority of the levels can be beat within just a couple minutes. Therefore if you can beat most of the levels right away, it won’t take all that long to beat the entire game. Unless you are already quite familiar with the game though, you likely will die quite a bit which will force you to replay levels adding to the game’s length. I would guess that it will take most players around 3-5 hours to beat the game. That will somewhat depend on how good you are at the game though. After you beat the game you will unlock two additional modes. The boss rush mode basically allows you to play all of the boss fights one after another. The classic mode is basically the original game recreated in order to work on modern consoles.

In many ways Alex Kidd in Miracle World DX is what I expected it to be. The game is basically a remaster of Alex Kidd in Miracle World which sticks pretty close to the original game. There have been some slight tweaks to the levels and there are a couple new levels, but a majority of the game is exactly the same. The game does a pretty good job staying loyal to the original game. The gameplay is simple but enjoyable like many of the most popular video games released back in the 1980s. Fans of old arcade platformers should enjoy the game. While the game improves upon the controls, it does still have moments where they can feel a little stiff. The game is usually moderately difficult, but it does occasionally suffer from areas where it feels a little unfair. The game is also kind of short as you should be able to beat the game within a couple hours.