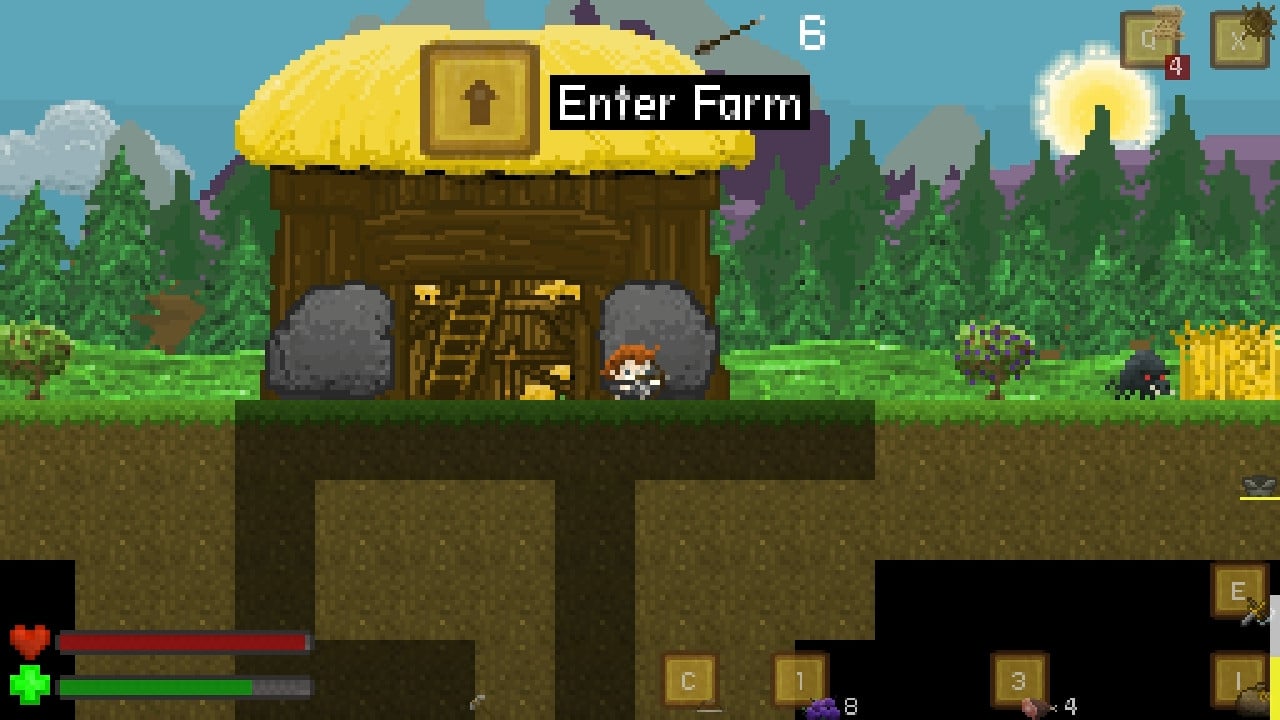 When I was offered a chance to review Aground, I was struck by a couple of different things when I researched the game. Most of these things were good, a rare overwhelmingly positive rating on Steam and the fact that it was a game in a genre I absolutely love (survival crafting). The other thing that stood out was not such a good thing, the game’s interesting art style which I could already tell I wasn’t going to be a fan of (and the countless reviewers on Steam mentioning how mediocre to bad the game looked certainly didn’t help). Of course good art and graphics are a nice thing to have but I’ve always been a gameplay first kind of guy so I’m willing to overlook a bad art style if there’s a good game inside it. Ugly ducklings are occasionally some of the most unique games on Steam from a gameplay standpoint. The game’s overwhelmingly positive reviews on Steam were more than enough to get me to check it out even with the less than stellar art. Unfortunately, I wasn’t quite as impressed by Aground as those Steam reviewers for reasons I’ll detail in the next few paragraphs. Aground is a solid (though unspectacular) indie game, but it can’t compete with the big boys in the survival crafting genre at this point.

Aground is a survival crafting game that came out on Steam last year and is now getting its console ports (PlayStation 4, Nintendo Switch, and Xbox One). It takes place in a world where you are one of the last human survivors and find yourself stranded on an “uninhabited” island (where it takes all of a few minutes to find other survivors). With the help of those other survivors you find, you will effectively have to rebuild society by mining, crafting, and building structures (as well as fighting off enemies). While this seems like a pretty simple and straightforward survival crafting game at first (just like every other game in the genre), it does take a lot of twists and turns as your technology level increases.

The first game that came to my mind while reading up on Aground was Terraria, and I honestly thought it was going to be pretty much a clone of it (though based on its Steam reviews, a good one). While it’s certainly heavily inspired by Terraria, as well as other survival crafting games, I do think it is more of its own thing than I thought it would be. It’s heavily linear and quest-based and strangely almost reminds me as much of clicker games (especially Plantera) as games like Minecraft. The buildings are mostly just there to produce different goods and you have other survivors that help you gather the resources they provide. There’s definitely still some elements of survival crafting games here, it’s just that the onus is on getting the goods to make the machines that will allow you to produce new “widgets” instead of crafting or building whatever you want, exploring wherever you want, or anything like that. In other words, it’s linear and quest-based, not a sandbox survival crafting game (which I generally tend to prefer).

Outside of the admittedly below average to flat-out bad art, there really isn’t anything wrong per se with Aground (most of my negatives are the result of the game being developed by a small indie development team). I just don’t think it can compete with the other games in the upper echelon of the survival crafting genre. Minecraft has the ability to build whatever you want, wherever you want (and at least in my opinion, is the gold standard of the genre). Terraria has a ton of depth in terms of bosses and the large amount of weapons and other items you can make. Stardew Valley isn’t a prototypical survival crafting game but there’s a lot of similarities and it has amazing art and music that sucks you in to keep playing (I’m currently undergoing my second relapse with this game). Forager is possibly the most similar game on this list but at least in my book, felt more rewarding than Aground (as it has even more of the clicker game hallmarks to the point where you get massive amounts of resources from simply swinging a tool). All of those are amazing games though so if Aground did compare favorably to any of them, it would make it a must-buy. Unfortunately, while it has bits and pieces from each, I think it was trying to be too many things at once when it should have focused a bit more on some core tenants. There is a lot of content here and for $14.99 you could do a lot worse. It’s just that this is a very crowded genre of incredibly time-consuming games at this point which makes it hard for a more mid-tier game like Aground to stand out.

On the positive side, Aground does offer a grindy experience for those who enjoy games like that (which I do). It also offers more structure than open-ended games like Minecraft (which may be a positive for some but not for me). The game also offers some unique (or at least relatively new concepts) that haven’t been done in this genre before. You get to sail from island to island, help them build up their settlements, trap creatures, trade with merchants, and do a lot of other relatively uncommon things in this genre. The only problem is that the implementation of each is quite basic. Considering the small team this game has developing it, it isn’t that surprising that they couldn’t go too in-depth into any of these ideas but I do think they should have cut a few things in order to further polish other ideas.

On the negative side, the art style of Aground is definitely not for me. I love pixel art when it’s done well (games like Stardew Valley and Terraria are both amazing to look at) but everything here is just so…chunky. This is a common complaint amongst Steam reviewers and I can’t say I feel any differently. I won’t say the art is ugly but I will say that it’s very simple and low-resolution. I know the developers of the game probably wanted to look different and stand out a bit from the usually standard-looking pixel art-based games in this genre but choosing an art style like this probably turned off more people than looking like a clone of Terraria would have. Aground is also not particularly user-friendly at times. You need to press a lot of buttons to do simple things like equip a new torch or move your inventory into storage. I also occasionally couldn’t figure out how to do things like make a net to trap pigs for a quest. I had to just buy the nets from traders at the market and then found out that you have to make them at a building you construct later on (the shipyard). Also, I found the combat in Aground to be very rough. Maybe I just stink at it but I could never consistently hit enemies as I was always either too far away or close enough to get hit by them before I could do the same. Also, Aground isn’t launching with multiplayer (the Steam version has it) but it may be coming later.

Due to the game’s overwhelmingly positive rating on Steam, I have to admit I was a bit disappointed by Aground. While it’s far from a bad game, it’s also way too rough to be worthy of the rare, almost universal, acclaim it’s gotten from Steam reviewers. I appreciate the attempt to expand on the survival crafting formula but everything here just feels too simple and basic to me. I think a “positive” review rating on Steam would be much more indicative of what I though about Aground. It certainly isn’t a must-buy but fans of the genre looking for a new grindy and linear quest-based survival crafting game may find enough to be interested by Aground (as long as you don’t mind the extremely simple art style and the rough combat).