While Aggravation was originally created in 1962 by the Co-5 corporation, it owes much of its inspiration to the ancient Indian game Pachisi/Parcheesi which was created hundreds to thousands of years ago. As a matter of fact Pachisi has inspired many other board games including Ludo, Sorry and Trouble. Having played Parcheesi a while ago I can’t say that I had high expectations for Aggravation. While Parcheesi was a decent game, it is basically a very average roll and move game. While Aggravation is a simple roll and move game, there is not enough to the game to keep it interesting.

How to Play Aggravation

A player begins their turn by rolling their die. To remove a playing piece from their base a player has to roll a one or a six. When a player removes a marble from their base they place it on their start space. 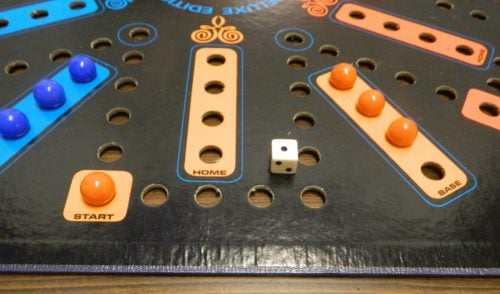 This player has rolled a one so they removed one of the marbles from their base. 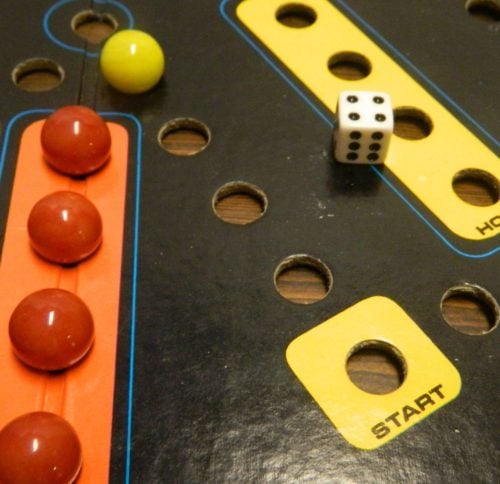 The yellow player has rolled a four so they moved one of their marbles four spaces off their start space. 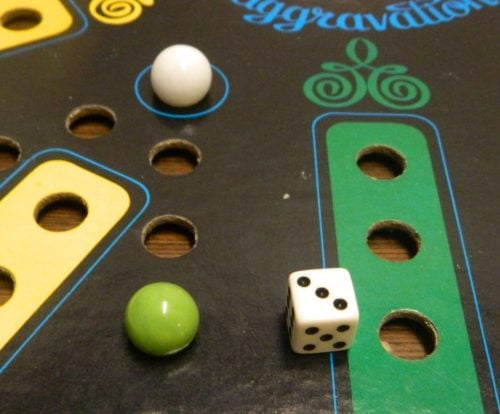 When a player rolls a six and is able to use it, they get to take another turn. 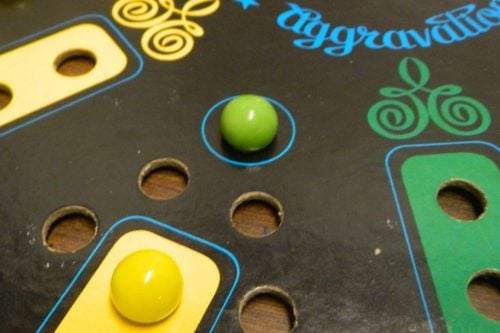 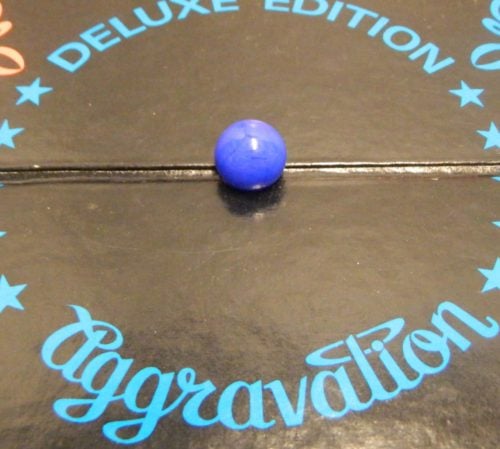 The first player to get all four of their marbles into their home wins. 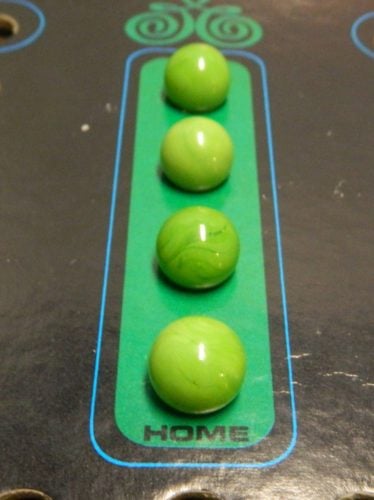 The green player has gotten all four of their marbles home so they have won the game.

In the partnership game players will partner with the player whose home is on the opposite side of the board. During the partner game players can move past their partner’s marbles but not their own. If they land on a space occupied by their partner, they send that player’s marble back to their base. When one of the two players has all of their marbles in their home, their roll will be used to move their partner’s marbles. When both players have gotten all of their marbles to their home spaces, they win the game.

In the team game players will divide into teams of three. Team members alternate spots around the gameboard. The team game follows the same rules as the partnership game. When a player has gotten all of their marbles to their home they will roll for their teammates. Before rolling the dice though the player has to declare which player will use their die roll. When all three players have gotten all of their marbles home, the team wins the game.

My Thoughts on Aggravation

Aggravation along with the games I already mentioned and quite a few other games are a part of a group of games that owe a lot of their inspiration to Pachisi. Basically all of these games are the definition of a generic roll and move game. Players take turns rolling the dice and moving their playing pieces around the board. The ultimate goal is to get all of your pieces back to your home. If you are able to land on another player’s piece you are able to send them back to their base forcing them to move their piece around the board again. The main difference between the games come down to the form of movement (number of dice or cards), and the size and shape of the gameboard. There are some other small differences but for the most part all of these games basically play the same. If you have ever played one of these other games before you already have a good idea of what to expect out of Aggravation.

As I have already reviewed Parcheesi I am not going to spend a lot of time talking about the mechanics that all of these games share. For the most part they play like very generic roll and move games. Aggravation is simple and straightforward which will make the game work pretty well with younger children and people that don’t play a lot of board games. The roll and move mechanics rely heavily on luck though. There might be some decisions in the game (usually pretty obvious) but your fate is going to be determined by how well you roll the die. If you roll poorly (like I did) you have no chance of winning the game.

The biggest reason why I like the shortcuts is that they speed up the game quite a bit. It takes a lot of turns to move a piece around the entire gameboard. You can get a couple spaces away from being safe and then another player could capture your piece forcing you to move through the entire board again. One of the biggest problems that I had with Parcheesi is the fact that the game took way too long. Aggravation is quite a bit shorter than Parcheesi partially due to the shortcuts. While you are taking a little risk using the shortcuts (since other players will likely use them as well which makes it easier to capture your pieces) the benefit is well worth it. By using the shortcuts you can get a piece from your start to your home within a couple turns.

The other reason I like the shortcuts is that they add more decision making to the game. With the normal shortcuts I think the risk is well worth the reward. Nonetheless I appreciate the game giving players some choices. The more interesting shortcut is the super shortcut. The super shortcut acts like the normal shortcuts except that it has more risk and reward. You can move to the center space from anywhere on the board if you roll a number that lands you exactly on the space. Then all you have to do is roll a one to move to any other shortcut on the board. The super shortcut can make it really quick to get a piece back to your home. You are taking a decent risk though. As there is only one center space another player could easily capture your piece sending it back to your base. There is also the fact that you have to roll a one to move your piece from the space which might take a while and keep your piece vulnerable to being captured.

While I liked the shortcuts there really isn’t anything else in Aggravation that separates it from all of the other similar roll and move games. This is one of the areas where I preferred Parcheesi. While I like that Aggravation is more streamlined and shorter, it doesn’t have as many decisions to make as Parchessi does. Parcheesi isn’t highly strategic either but it gives players opportunities to make decisions that will actually impact the game. In Parcheesi it just felt like you had more control over your fate.

As far as the components I can really only comment on the 1965 version of the game that I played. Basically every version of Aggravation comes with dice, marbles and the gameboard. While some versions are going to be better than others, the components for the most part are pretty basic. The artwork is pretty generic. The gameboard is your basic 1960s/1970s gameboard. The components serve their purpose but I wouldn’t consider them to be highly engaging either.

Should You Buy Aggravation?

Pachisi, the inspiration for Aggravation, has inspired many roll and move games over the years. It should then come as no surprise that Aggravation shares a lot in common with all of the other similar games inspired by Pachisi. At its heart it is a very basic roll and move game. You roll the dice hoping to get all of your pieces home before the other players. You can also send the other players’ pieces back to the start but there isn’t much else to the game. The one unique mechanic that Aggravation has are the shortcut spaces. The shortcut spaces are a nice addition as they speed up the game while also adding some decisions to the game. Other than the shortcut spaces though Aggravation doesn’t really have anything new that you can’t find in the many other Pachisi style games.

If you have already played one of the other Pachisi style games you already should have a good idea of whether you would like Aggravation. If you don’t really care about the shortcuts there is no reason to purchase Aggravation over one of the other games. Otherwise your decision is probably going to come down how much you like roll and move games. If you like simple roll and move games you will probably enjoy Aggravation. Otherwise I would recommend passing.

If you would like to purchase Aggravation you can find it online: Amazon, eBay

My husband and I like to play Aggravation. But I need your opinion on one thing. When you are in the center shortcut, it says with a one, you can move to ANY star shortcut. Does that mean you can do one past your home star? My husband had a green marble, yet he got me out when I was on the star for white's home. I don't think you can go past your home star. Otherwise, he could stay on the stars and keep getting me out. I am truly aggravated!!

I don't think the rules specifically mention if you can go past your own home star when using the center shortcut. Therefore I am guessing this is one of those situations where the players have to agree on how it should be handled. The rules specifically mention that you can't go past your own start when you use the corner shortcuts. Therefore I think the spirit of the rules would not allow you to go past your own starting space even when using the center shortcut. As the rules don't specifically say this though some people might argue that you can do it as the rules don't specifically forbid it. Thus it is one of those situations of whether you follow the spirit of the rules or the literal printed rules. I personally wouldn't allow it, but I also think it is up to the group that is playing whether to allow it or not.