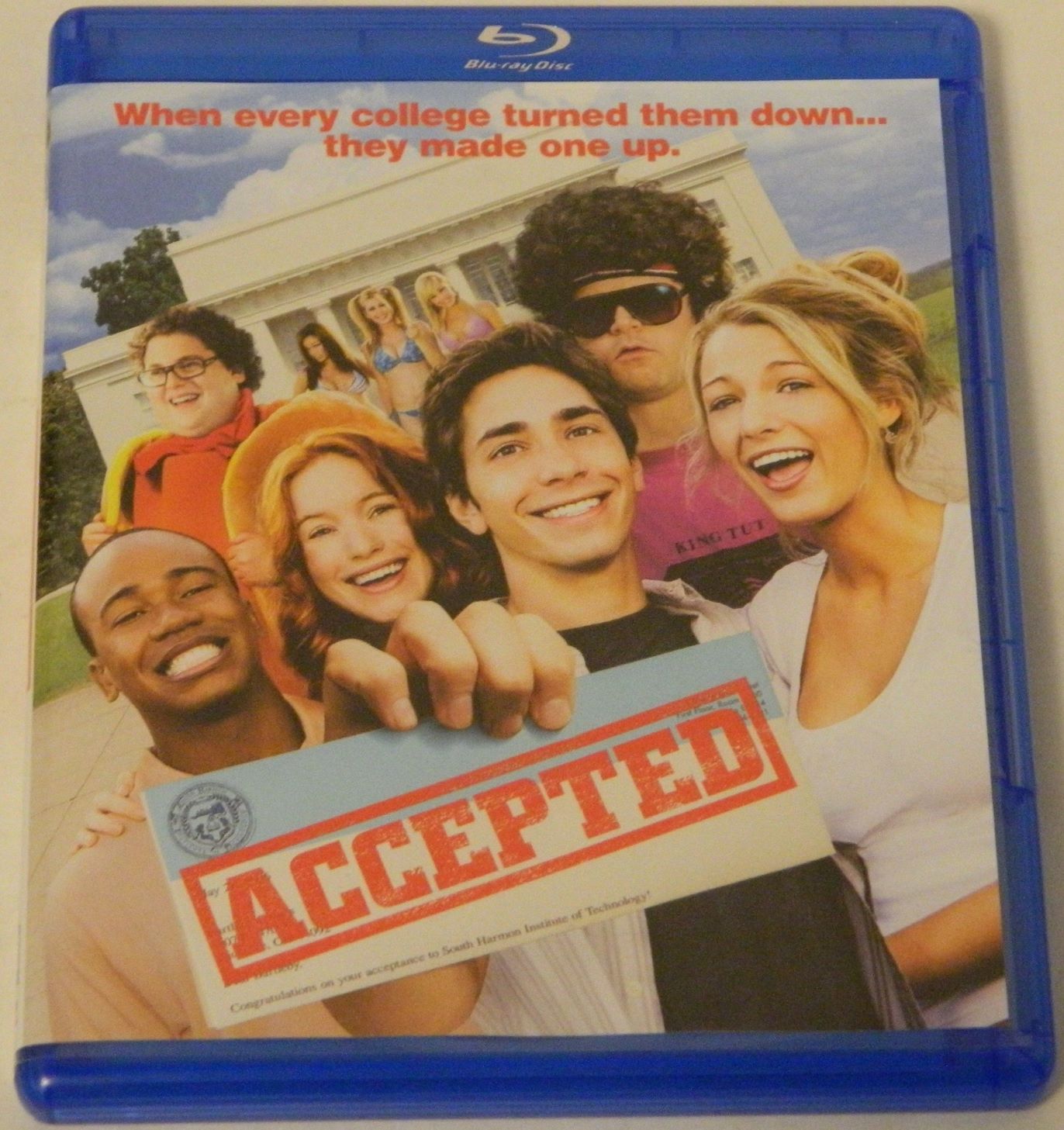 With the price of college rising exponentially and the value earned from a degree not improving at the same rate (at least for those not fortunate enough to be born into a “prestigious” family or have the connections needed to get a great job these days), more and more people are considering skipping it or going into alternative methods of schooling. A comedy like Accepted now almost feels like a viable option for today’s young adults. Appearing on Blu-ray for the first time ever thanks to Mill Creek Entertainment (it’s one of the last HD-DVD titles to finally come to Blu-ray), Accepted is a decent enough comedy that gets enough laughs to work (but just barely). Usually a company focused on budget releases, Mill Creek has done a great job with this release as it is honestly one of their best looking titles I’ve reviewed so far.

Accepted stars Justin Long as Bartleby Gaines (also known as “B”), a high school senior who has been rejected from every college he applied to. His parents and younger sister are incredibly disappointed with him until he comes up with a brilliant plan. “B” is a master at making fake IDs and BS-ing his way out of anything so he uses his craft to create an acceptance letter from a fake college called the “South Harmon Institute of Technology” (yes, the acronym for it is “S.H.I.T.” and of course this joke is used repeatedly throughout the film). He does this to get his parents off his back and to be able to slack off for a semester. To make things more legit, he also has his friend Sherman Schrader (Jonah Hill) make a website for the college to help sell his parents on the lie. However, Schrader does too good of a job while building the site, winds up making it functional, and since the site says acceptance is just “one click away,” S.H.I.T. suddenly has hundreds if not thousands of people “attending” the supposed college. B knows that the jig is up and that he needs to put an end to this plot which has now turned into outright fraud (as each student paid thousands of dollars for the semester). Just before he’s about to announce that S.H.I.T. isn’t a real university, he changes his mind when he finds out that all of his students are in a similar boat to him as all were rejected from every college they applied to and have nowhere else to go. He decides to turn S.H.I.T. into the best college he can, using the tuition money to improve the “campus,” letting his students study whatever they want, and having it become a much more fun alternative to traditional universities.

For comedies, almost everything relies completely on just how funny the film is. Of course, a good story or cast is a nice bonus but if you are trying to be a comedy and fail to get enough humor into your movie, no matter how great the rest of the ingredients are the end product isn’t going to be that great. While the premise of Accepted is pretty unique, it still winds up being a typical comedy and will be judged as one. Ultimately, while Accepted is far from the funniest film I’ve ever seen, it also had just enough laughs to entertain me throughout the 92-minute run time. I did find the supporting players to be the funniest part of the movie though, especially Jonah Hill and some of the bit players like Glen and the guy who just wants to learn how to blow things up with his mind. Unfortunately, the film focuses heavily on B, who is a far less interesting and funny character than most of the rest of the cast. I do also wish the film would have went a little less all-in on the “S.H.I.T.” jokes as there are probably at least 30-50 of them in this movie (or it certainly felt like that many at least). Some are actually funny but the reliance on using the school’s “funny name” for jokes does eventually get old. While I thought this would be a pretty typical teenage comedy, I was actually surprised that it also has a bit of heart to it as well. It does bring up some interesting points on how colleges become prestigious due to their rejection rates (and reject perfectly good students to maintain their prestige), how much is riding on students getting into college, and how learning can be accomplished in other ways than the traditional college experience. Outside of the 30-50 jokes involving the word S.H.I.T., this really isn’t just some dumb comedy made exclusively for teens growing up when it came out. It may not be great but it’s a decent enough PG-13 comedy. If only it were a bit more consistently funny.

This is the point in my reviews where I usually mention that Mill Creek Entertainment titles are almost always meant to be budget releases and as such, no bonus features are included and the video quality upgrade isn’t nearly as good as you were probably hoping for. That’s not the case for Accepted though, this is actually a very good Blu-ray release that I think fans of the film will be very happy with. Most of the bonus features from the DVD release have been transferred over to this release (though in standard definition) and the video quality is actually good to great. In fact, I’d say the picture quality is extremely sharp and clear and well worth the upgrade to Blu-ray if you like this movie. In terms of video quality, this release is much better than your usual Mill Creek release, though part of this is of course due to the relatively newness of the film (and the fact that it was already available in high-definition, though on HD-DVD instead of Blu-ray). I think even video quality sticklers who usually ignore Mill Creek releases under the assumption that the upgrade isn’t going to be big enough for them will be impressed by this release. A comedy like Accepted isn’t something that you necessarily need to own on Blu-ray but the difference between this and a DVD is night and day. Accepted is one of the best-looking Mill Creek Blu-ray releases I’ve ever seen. If you like this film, it’s almost certainly worth the upgrade (especially considering how cheap it is on Amazon at the time of this post’s publication).

In terms of extras, it appears that most of the bonus features have been ported over from the DVD (and presumably HD-DVD) release of the film. The only extras that didn’t make the cut appear to be two music videos. While all of the bonus features on this release are in standard definition, they are pretty numerous including an audio commentary with director Steve Pink and much of the cast, a behind the scenes featurette, “Adam’s Accepted Chronicles,” a “campus tour,” deleted scenes, and a gag reel.

Ultimately, Accepted is a reasonably funny comedy that does draw enough laughs even though there are many long stretches without much humor. There’s some legitimately funny moments but the comedy isn’t super consistent. Accepted has a pretty unique concept but it isn’t particularly original in its execution. It feels a lot like many other early-to-mid 2000’s teen comedies. Overall, this all adds up to a watchable but mediocre comedy which is pretty much the definition of a 3/5 (and what I’m giving this film). For those who already know they love this film, I would say this is well worth the upgrade to Blu-ray for the significant increase in video quality.