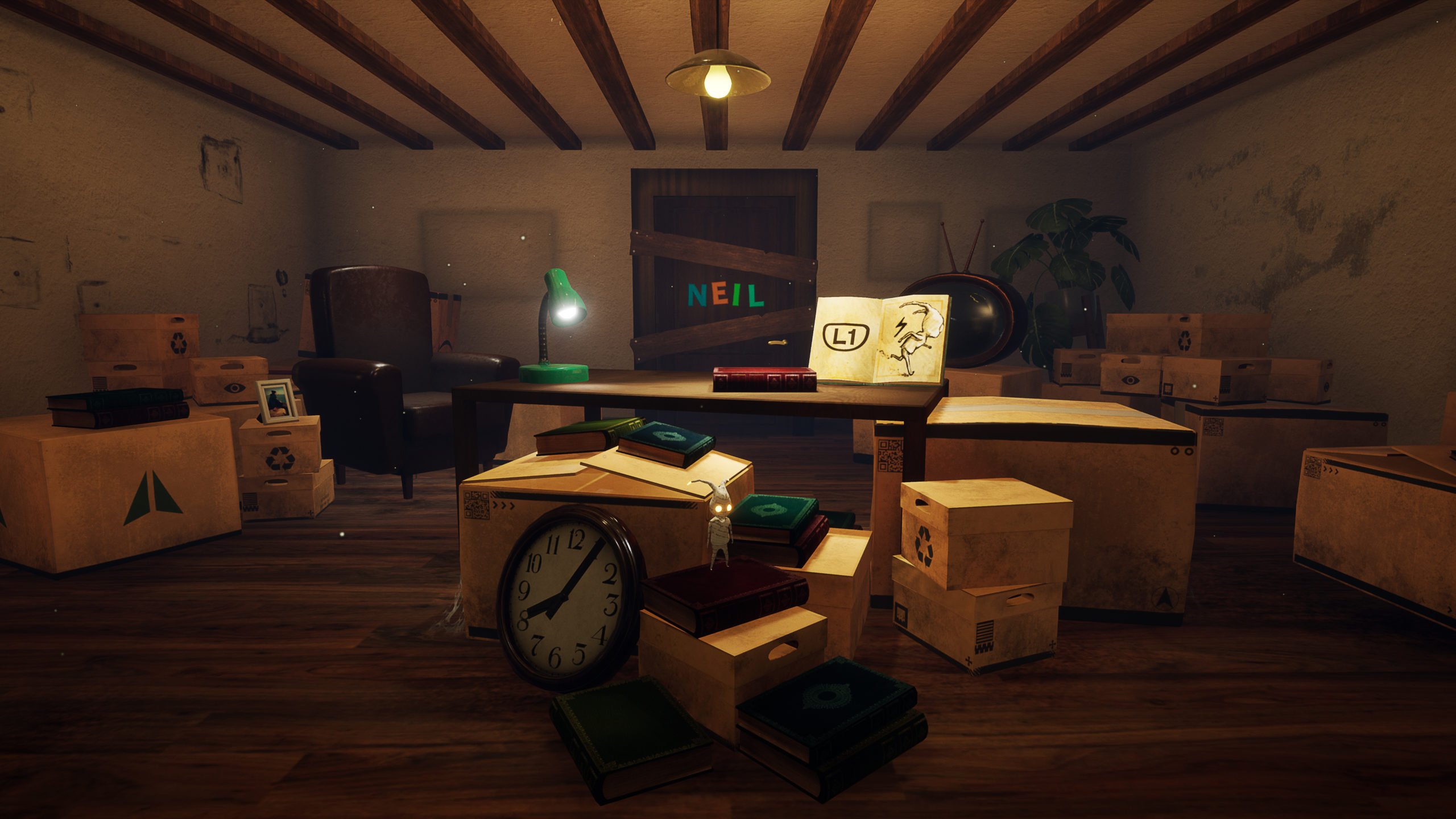 One of my favorite video game genres is the puzzle platformer. I am a big fan of the genre because both platforming and puzzle solving are two of my favorite mechanics. For this reason I always try to check out new games from the genre. As a big fan of the indie video game scene I have played quite a few different puzzle platformers over the years. With how many games that are in this genre most try to do something unique in order to stand out. In the case of today’s game, A Tale of Paper, the game adds an origami premise where you can switch between different forms granting your character different abilities. A Tale of Paper is a fun origami themed platformer with an interesting atmosphere that unfortunately is on the short and easy side.

In A Tale of Paper you play as Line. Line is basically a piece of paper that is brought to life to fulfill its creator’s dream. As a piece of paper Line has the ability to use origami to transform into different forms. Each of these forms give you different abilities. The first form you will receive in the game is that of a frog. The frog can jump considerably higher than all of the other forms, but otherwise can’t move. Other forms include a paper ball that rolls down hills and through small openings, a paper airplane that floats through the air, and other forms. In order to proceed you need to switch between the forms which is done by pressing the corresponding button.

For the most part A Tale of Paper is a puzzle platformer. Most of the gameplay revolves around jumping between platforms and finding other ways to make it around obstacles. The game is kind of a mixture between a 2D and 3D platformer. The world mostly just scrolls left and right. You can move in all directions though like every other 3D platformer. In addition to the platforming mechanics there is also some light puzzle solving. Many of the puzzles revolve around pushing buttons in a certain order. There are also a few timing puzzles where you press a button to start a timer and you need to reach another area before you run out of time.

I will say that in many ways A Tale of Paper plays a lot like your typical puzzle platfomer. The game has one unique mechanic which I will talk about shortly. Even with this mechanic though the gameplay is still pretty similar to many puzzle platformers as it doesn’t change the formula in any drastic ways. Anyone familiar with the genre is likely to have a pretty good idea of what to expect from the game. If you have never really cared for the genre A Tale of Paper is unlikely to change your opinion in any significant way. Fans of the genre though will likely enjoy playing the game. As a fan of puzzle platformers I enjoyed my time with the game. The platforming is satisfying and the controls work well for the most part.

The element of the game that intrigued me the most was the origami mechanic. The idea of being able to change between different forms was intriguing. I wish the game would have gone a little further with it by adding a few more forms, but I thought it worked pretty well for the game. Switching between forms is seamless as you only have to press one button to immediately change to another form. Changing forms is important in the game as you need to utilize each form at the right time to make progress. There are quite a few times in the game where you even have to use two different forms together in order to accomplish a task.

In addition to the satisfying gameplay I think A Tale of Paper deserves some credit for its overall atmosphere and story. The game’s artstyle does a good job taking advantage of the origami theme. You play as a small paper creature which means that the game really plays with scale. Things that would normally be simple to accomplish become much more challenging for Line. The graphics look quite nice for an indie game. In a lot of ways it feels like an artistic game. This continues into the game’s story. The story is on the abstract side as there is no written or audible dialog in the game. Most of the story is told through the environment and your interactions with it. Therefore it is a story that you kind of have to interpret for yourself. I thought the story was interesting even though people who don’t care for abstract stories may have a differing opinion.

I enjoyed playing A Tale of Paper but it does have two main issues which prevent it from being as good as it could have been.

Lets begin with the game’s difficulty. I am going to preface this by saying that I play a lot of puzzle platformers. That said I found the game to be pretty easy. The puzzles in the game are pretty simple and don’t differ too much from other games from this genre. The only difficult puzzle was one that I basically had to brute force either because I didn’t see the clues for it or that is how you are supposed to solve the puzzle. As for the platforming it is also pretty straightforward. Most of the jumps aren’t particularly difficult as the game gives you quite a bit of leniency.

There really are only two parts of the game that are somewhat challenging. First there is a runner sequence where you have to run away from something that is chasing you. You likely will die a few times in this sequence because you need a quick reaction time to adjust to the obstacles that come up. Once you familiarize yourself with what is coming up though it is not particularly challenging. Otherwise your deaths in the game will come down to your depth perception. At times during the game it is somewhat hard to judge where a platform is so you will miss the jump. This is a little frustrating at times, but you generally don’t lose much when you die so it isn’t a big deal. Otherwise the game is quite easy for anyone who is familiar with 3D platformers.

Probably the biggest issue with A Tale of Paper is the fact that the game is quite short. I was actually able to beat the entire game in one sitting. I would estimate that it took around two hours to beat the game. I play a lot of games from this genre though so those less familiar with the genre could get a little more time out of the game. The game has some hidden collectibles which will add a little time to the game. I found most of them, but missed a couple. Along with getting the other trophies you may get around three hours out of the game if you are a completionist. Unfortunately the game doesn’t have a lot of replay value as the game is really linear. The biggest issue with the shorter length is the fact that I thought the game was really starting to pick up and then it just ends. I think the game could have done quite a bit more with the mechanics.

At the end of the day A Tale of Paper shares a lot in common with your typical game from the puzzle platformer genre. Much of the gameplay is based around jumping between platforms and solving simple puzzles in order to open up a path to proceed. Where the game differentiates itself is in the addition of the origami mechanic. As you progress through the game you will unlock different forms for your character which have different abilities. This is a unique idea that is also quite fun as you are forced to switch between different forms to take advantage of each form’s ability. The game’s overall atmosphere and story are pretty good as well. A Tale of Paper is on the easier side though as outside of a couple small parts it isn’t particularly challenging. The game is also on the easier side as most players should be able to finish it within two to three hours.

My recommendation for A Tale of Paper comes down to your opinion of the premise and puzzle platformers in general. If you have never cared for the genre or don’t have much interest in the origami premise, A Tale of Paper probably won’t be for you. Fans of puzzle platformers or the premise should enjoy the game though. Whether you should purchase the game right away or wait for a sale depends on how much you value length as the game is pretty short.

A Tale of Paper