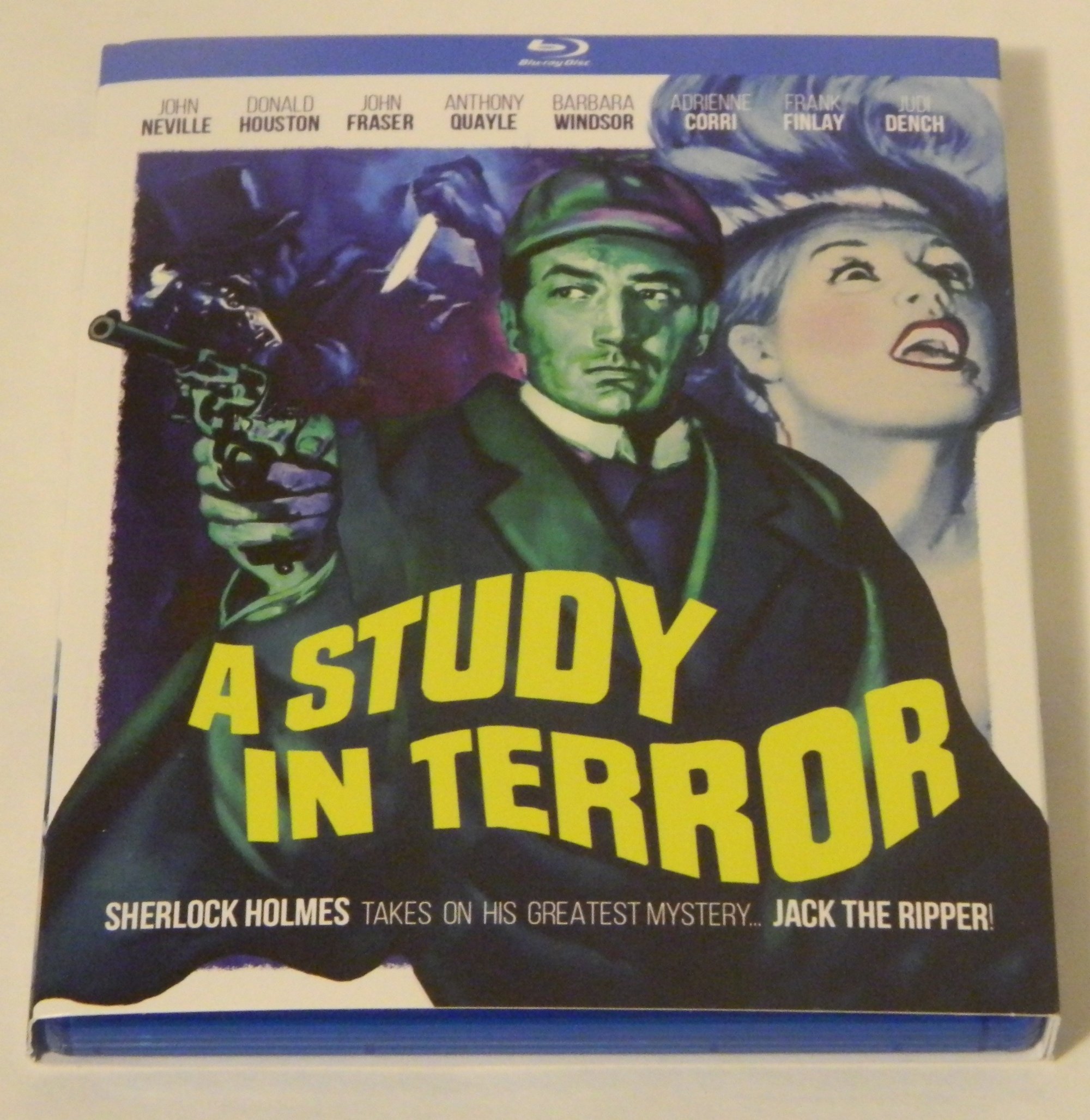 Over the history of film, there have been more than 200 Sherlock Holmes movies produced and over 70 different actors have portrayed the title character. A Study in Terror is somewhat of an oddball entry in the Sherlock Holmes filmography. First of all, it isn’t part of a series (this was John Neville’s only Sherlock Holmes film) unlike most of them. More notably, this is likely one of the bloodiest Sherlock Holmes films ever made (though I still wouldn’t quite consider it to be a violent film).

While A Study in Terror uses characters from Arthur Conan Doyle’s stories, it has a completely original plot. This film is set in the days of Jack the Ripper and tasks Holmes with figuring out who they are before they can commit even more murders than they’ve already done. The cast includes John Neville (Sherlock Holmes), Donald Houston (Watson), Anthony Quayle, John Fraser, and a young Judi Dench in one of her earliest film roles.

A Study in Terror isn’t really that well-known of a Sherlock Holmes film and I can kind of see why. I didn’t regret watching the film but I thought it was very mediocre overall. Based on the box art and concept, I was hoping for a more cheesy, B-movie like take on Sherlock Holmes. In some ways, the film does achieve that (mainly due to Watson’s snootiness and occasional unintentionally hilarious quotes) but it’s a bit more serious than I was hoping for.

Let’s start off with the positives in A Study in Terror. First of all, it takes a very different approach from most Sherlock Holmes films. There is quite a bit of blood and the film comes very close to becoming a violent film in my book. Most Sherlock Holmes films are very family-friendly with little to no violence. While the plot is still pretty mediocre, at least they tried something new with this Sherlock Holmes film. However, the thing I liked the most about A Study in Terror probably wasn’t planned. The best part of the film is Watson’s snootiness and extremely British insults. I doubt they were supposed to make me laugh but things like “I did not come here to partake in the soup” had me in stitches for some reason. It’s such a stupid quote yet I laughed so much. There’s also “your son is a pathetic imbecile” and “your face reacts faster than your brain.” I’m guessing this was also not intentional but while watching the film I was imagining Sherlock and Watson as a couple since they really seem to act like one in this film (at least at times). I’ve always wanted to see a film where the two “close friends” are actually a couple and this is probably one of the films that comes closest to fulfilling that.

I don’t actually have a lot of negatives for this movie but unfortunately it does commit one of the biggest sins a film can make, being boring at times. The times when Watson is handing out savage insults and Jack the Ripper is killing his victims (especially the pretty unique final kill which is shot from his vantage point) are interesting, however there is a whole lot of time where nothing interesting is happening. This is by far the biggest problem with the film and the reason why it will only receive an average 3 out of 5 from me. The only other major negative that stood out to me was the fact that I predicted the murderer pretty much as soon as they appeared (and I also correctly guessed the other twist in the film as well).

This is the first time that A Study in Terror has been released on Blu-ray in America. Mill Creek Entertainment did a pretty good job with this film in the video quality department. For a film that is over 50 years old, this film looks pretty clear and clean. Of course there are a few problems here or there but what do you expect from a film that is over a half-century old? This release of A Study in Terror includes no bonus features but it doesn’t seem like any of the other American releases of the film came with any either.

Basically, with A Study in Terror you are getting a film that is pretty predictable and boring at times but you are also getting a new take on Sherlock Holmes and a bit of cheesy B-movie comedy to go with it. If you are interested in a more violent, cheesier version of Sherlock Holmes, I would recommend giving it a try. However, this version of Sherlock is clearly not for everyone.

Pros: Cons: Amazon: Buy A Study in Terror on Amazon